How to Cook Daylilies

Daylilies (genus Hemerocallis) are a common flowering perennial in most of the lower 48. Native to Asia, these hardy plants that are commonly called ditch lilies can be found growing along roads, old house sites, lawns, and just about anywhere else. I love growing these plants for a few reasons—they require almost no maintenance, put up pretty blooms all summer, and they’re very tasty. 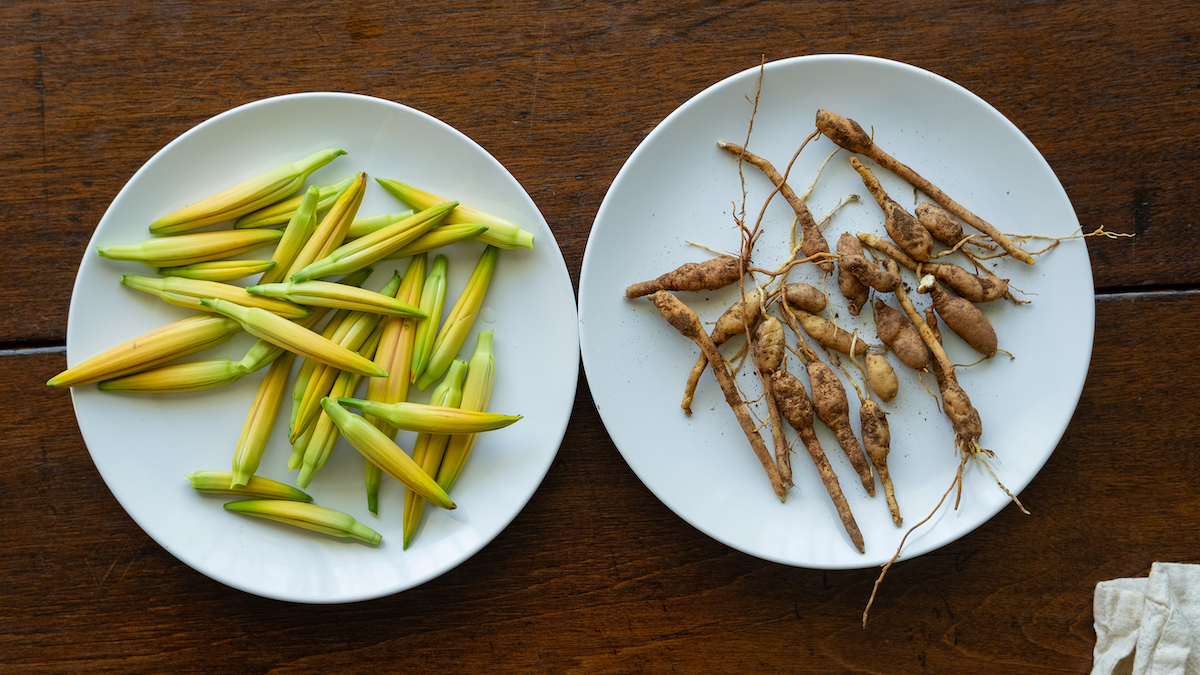 The buds are one of the best parts of the plant. They taste like a cross between artichoke hearts and green beans. They have a little soft crunch to them and a bright, green flavor. They’re absolutely delicious, and not in a “pretty good for foraged food way,” more like in a “damn good compared to anything” way.

You can batter and fry, roast, grill, steam, or saute them. Basically, any way you would cook a green bean, you can do the same to a daylily bud. I prefer them lightly seasoned and sauteed with butter. Add a little lemon juice if you want, or some herbs, but they honestly don’t need much. I also like to pickle some of the buds with some chili and dill—they make a great addition to any salad, charcuterie board, or just eaten out of the jar. 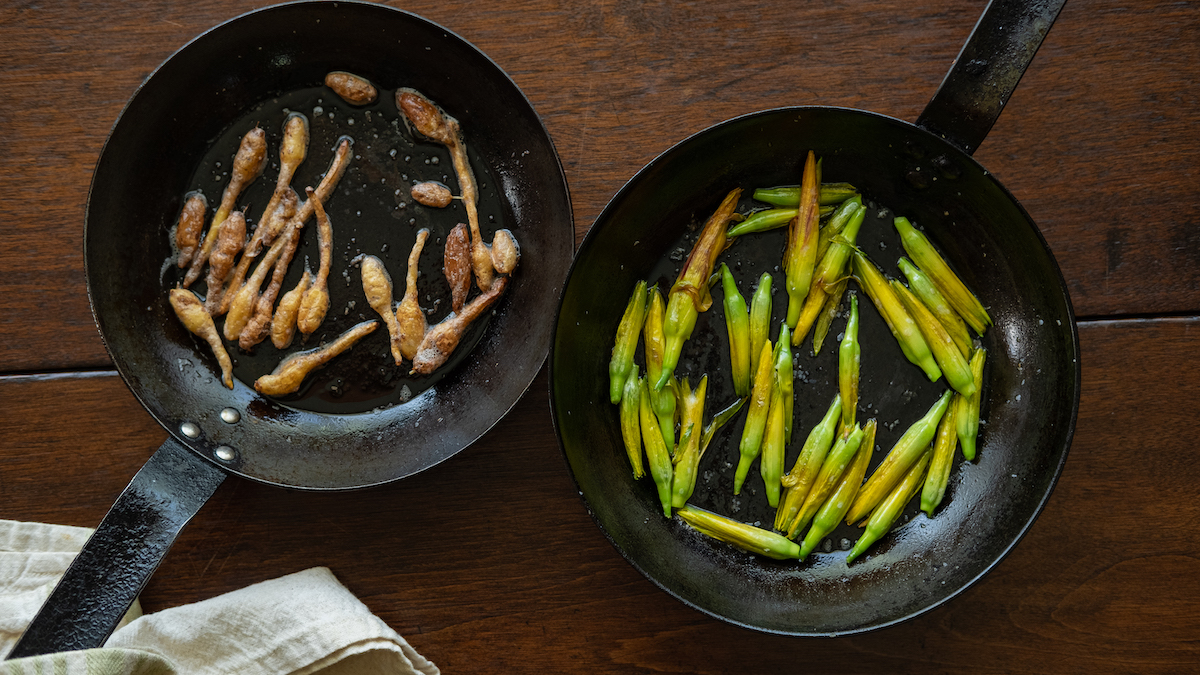 If you dig up a clump of daylilies, you'll find a tightly wound fibrous ball of roots and tubers. The tubers look like tiny potatoes, and they taste like a cross between potatoes and sunchokes. They have a starchy texture like a Yukon gold potato, with a bit of sweetness and a slightly floral note. Again, these are honestly delicious. It’s not survival food, it's top shelf.

To harvest, I dig up a plant and pluck a few of the largest tubers off of each clump, and then replant the lily. I mentioned earlier that these plants are hardy—they always seem to come back, and if you want to proliferate them even more, divide up the roots and tubers and spread them out. They’ll take over your space in just a few seasons.

I cook daylily tubers the same way I cook small potatoes, lightly blanched then sauteed with butter or any fat of your choice. I scrub the roots before cooking with a brush to remove any dirt and leave the skin on them. You can roast them in the oven, fry them, and if you had a pile you could boil and mash them. Treat them like you would any small potato, you can’t go wrong. 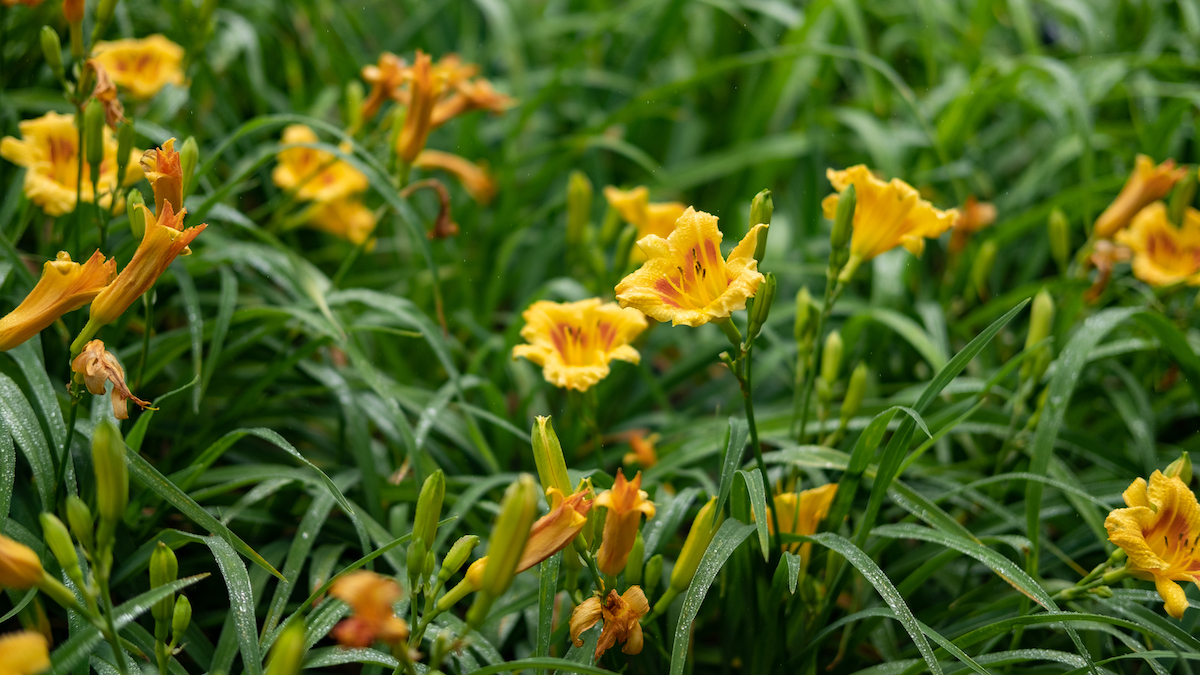 I generally think eating flowers is lame. Most of the time, edible flowers aren’t very tasty. They make a great garnish but usually range from kinda bland, to kind of bitter. Daylily flowers are an exception to my generalization. The entire plant has an undertone of artichoke, the flowers included.

They have a semi-crisp texture similar to bibb or mache lettuce. They have hints of artichoke, and a subtle floral note. I like to add them to salads raw, but they are also great stuffed and fried like squash blossoms, or dehydrated and added to soups. As far as edible flowers go, these are hard to beat in both taste and appearance.

While daylilies may seem like the perfect perennial, they are non-native and in some places are considered noxious weeds. So be mindful if you are going to propagate them. Also, while all members of the genus Hemerocallis are edible, there is a chance they might upset your stomach, so it’s recommended you eat a small amount the first time around. And on a final note, daylilies are not to be confused with the actual lilies (which grow from bulbs) some of which are toxic and could make you seriously ill or dead.

Save this product
Spiceology
4 Pack Seasonings Gift Pack
$35.99
Get the what you need to cover nearly any recipe in the kitchen. Designed tocover Fin, Fowl, Forage, and Fur these spices will step up your game in thekitchen with nearly any critter you bring home.
Save this product
Staub
Braiser 3.5 QT
$329.99
A featured piece in the kitchen of Chef Kevin Gillespie, the Braiser has broad functionality from freezer to oven to table.
Save this product
Staub
Tall Cocotte 5 QT
$199.99
"I use my Staub dutch oven more than any other cookware during the winter for creating delicious braised wild game recipes." - Danielle Prewett
Save this product
Penguin Random House
The MeatEater Fish and Game Cookbook
$35.00
The definitive guide to cooking wild game, including fish and fowl, featuring more than 100 new recipes.
Subscribe to Wild + Whole
Be the first to learn about Wild + Whole recipes, cooking techniques, and tips for growing or raising food to make you more confident in the kitchen, garden, and the outdoors
Privacy Policy

How to Forage Milkweed

Milkweed is a shining example of why we shouldn’t believe everything that we read. It carries with it, to this day, many myths that have traveled from mouth to ear and onward without fact-checking or personal experience. Myth number one is that it’s toxic, myth number two is that it’s bitter, and myth number three if you choose to ignore the first two, is that even if we could eat it, we shouldn’t because eating from the plants won’t leave enough...

How to Forage Stinging Nettles

If you’ve ever accidently grazed against a stinging nettle (Urtica dioica) with your bare skin, you’ll know it. You’ll first feel a stinging sensation, quick and sharp, and then your skin will start to blister. The accompanying pain and itch can last for days. This is all thanks to the hollow hairs, called trichomes, that cover the plant. On contact they act like needles that inject histamine and other chemicals into your skin. So, why—you’re...

I grew up on a farm, not far from where I live now. No one has lived there since my parents sold the place, but there was some road work done out front about a decade ago with heavy excavation. Someone sure did move in then, and fast—Japanese knotweed. Since the first shoots emerged from the freshly disturbed ditch 10 years ago, it has steadily crept up my old driveway, past the barn, and has pretty much swallowed my favorite old raspberry patch...