How to Forage Stinging Nettles

If you’ve ever accidently grazed against a stinging nettle (Urtica dioica) with your bare skin, you’ll know it. You’ll first feel a stinging sensation, quick and sharp, and then your skin will start to blister. The accompanying pain and itch can last for days. This is all thanks to the hollow hairs, called trichomes, that cover the plant. On contact they act like needles that inject histamine and other chemicals into your skin.

So, why—you’re probably wondering—would anyone in their right mind want to eat such a plant? Because stinging nettle is the forager’s “wild spinach.” The plant is actually a lot easier to harvest and cook than you’d think. And best of all, it grows abundantly and is free for the taking.

My appreciation for stinging nettle has grown over the years. Once maligned during early spring hikes and mushroom hunts, I now know to expect them and respect them. I make sure to wear long pants and bring gloves when I’m out. After I finally took the plunge into eating them several years ago, I now anticipate their annual arrival. Nettles are one of the earliest signs of spring and their verdant hue is a welcome sight after months of staring at the drab colors of winter. As an edible plant, stinging nettle is not only nutritious but also flavorful. It has a savory taste that store-bought spinach just can’t rival. 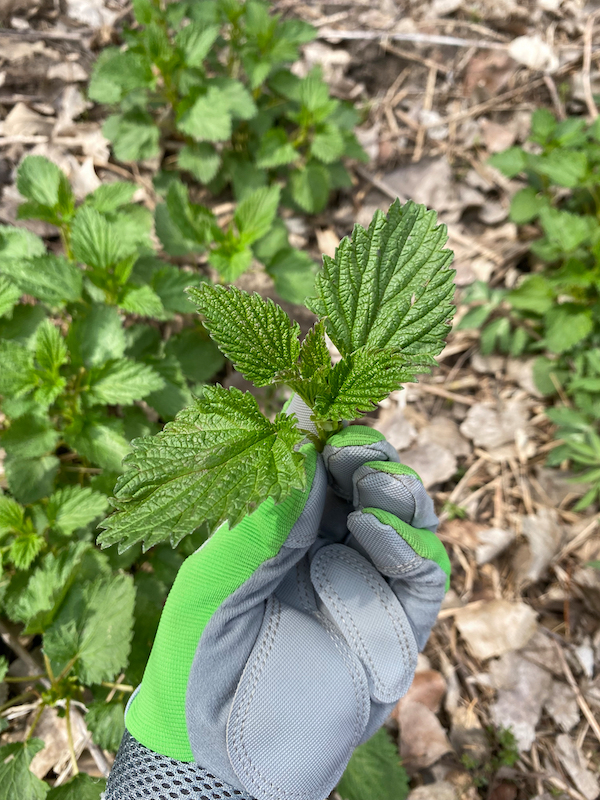 How to Collect Stinging Nettles

Where can you find stinging nettles? There are several subspecies of stinging nettles, and you’ll find at least one of them in practically all of the continental United States. They’re not native, and where they do exist, they’re likely growing thickly. To collect stinging nettles, all you need is a pair of gardening gloves, pruning shears, and a bag.

Collect stinging nettles in spring when the plants are small and tender. Choose plants that have well-developed leaves. Wearing gloves, cut about one to two nodes down. When young, the leaves and stems are tender enough for consumption. Once you get home, store them in plastic bags and refrigerate if you can’t process them right away. Nettles can last up to a week this way.

Keep in mind that stinging nettles shrink like spinach once processed. Gather a lot more than you think you’ll need in your recipes. If you end up with extra, you can freeze it.

To prepare stinging nettle, you’ll need a pot, tongs, large mixing bowl, ice, and a colander. Bring a pot of water to a low boil and make an ice bath with cold water and ice cubes in a large bowl.

Using tongs to handle nettles while they’re raw, blanch the stems and leaves in batches for about 30 to 60 seconds or until the stems have wilted. Then remove the nettles from the hot water with tongs, allow the excess water to drain off, and transfer to the ice bath to stop cooking and preserve their color. Once cooled, transfer nettles to a colander set in a clean sink to drain. Repeat this process until all the nettles are processed. Depending on how much nettle you collected, you’ll probably have to change out the ice bath once or twice. 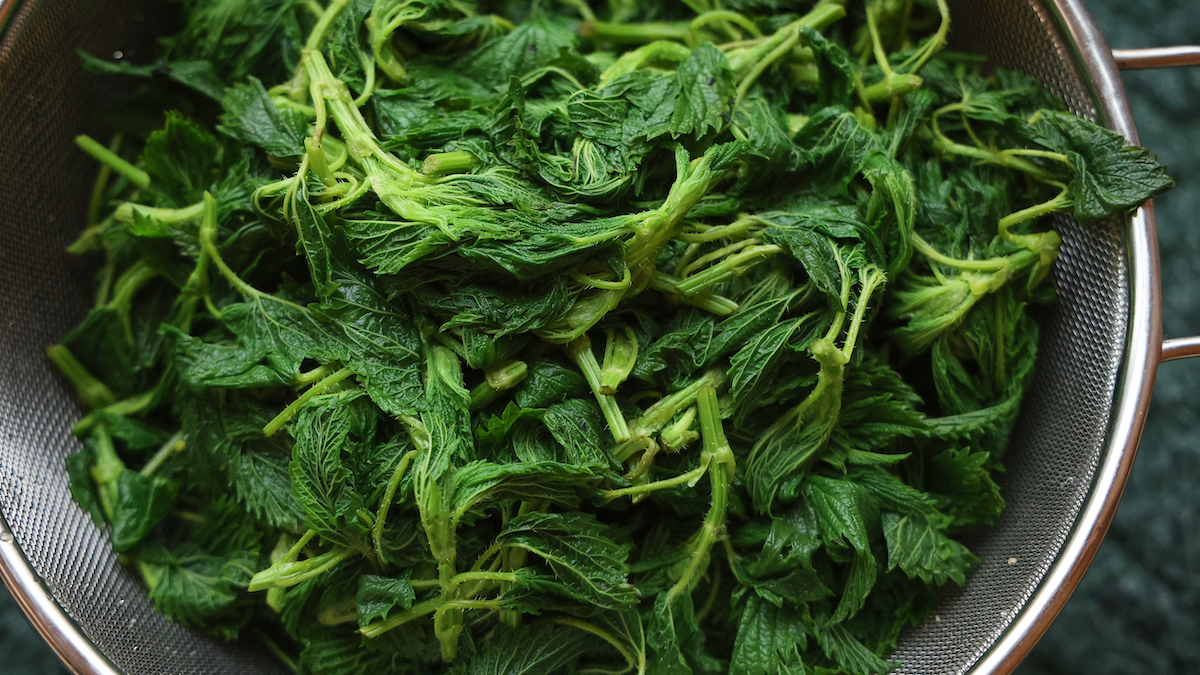 Once all the nettles are blanched and cooled, squeeze out as much liquid as possible before cooking or storing. At this time, they should be completely safe to handle with your bare hands. Use blanched stinging nettles like you would wilted spinach. Once wrung, nettles keep well in the freezer. I store them frozen in zip-top bags with all the air squeezed out and I treat it like frozen spinach. Use it within six months. You’ll probably have to give the thawed nettles another squeeze to prevent your dishes from tasting watery.

Soup is my favorite treatment of this plant. I prefer Scandinavia’s version with sour cream that rounds out the flavor of nettles so harmoniously. Other ideas include substituting the spinach in artichoke dip or Greek spanakopita or tossed in an omelet or quiche. Nettles seem to taste great in anything with cream, sour cream, egg and/or cheese, and the plant’s bright green color really makes homemade pasta pop.

How to Forage Milkweed

Milkweed is a shining example of why we shouldn’t believe everything that we read. It carries with it, to this day, many myths that have traveled from mouth to ear and onward without fact-checking or personal experience. Myth number one is that it’s toxic, myth number two is that it’s bitter, and myth number three if you choose to ignore the first two, is that even if we could eat it, we shouldn’t because eating from the plants won’t leave enough...

I grew up on a farm, not far from where I live now. No one has lived there since my parents sold the place, but there was some road work done out front about a decade ago with heavy excavation. Someone sure did move in then, and fast—Japanese knotweed. Since the first shoots emerged from the freshly disturbed ditch 10 years ago, it has steadily crept up my old driveway, past the barn, and has pretty much swallowed my favorite old raspberry patch...

How to Forage for Evergreen Tips

Spruce tips have been having a culinary moment for a few years now, which I love and understand—they are delightful, but I don’t know why the spotlight hasn’t expanded to include the tender tips of all our other evergreens, too. Pine, fir, and hemlock are easier to access for most people in the Lower 48 and can be used in similar ways. If you’ve wanted to bring home the flavor of the evergreen woods but you’ve tasted a needle and were put off by...