6 Beginner-Friendly Mushrooms You Can Find in Summer

Spring may get all the attention, but summer is a great time to be out in the mushroom woods. There are plenty of choice edibles popping up and many of them grow in high concentrations, creating a windfall for foragers looking to stock the pantry or freezer with some of the finest edibles Mother Nature has to offer.

Let’s take a look at six summer mushrooms you can find right now, where you might run into them, and some additional considerations for picking and consuming these five beginner-friendly varietals. Chicken of the Woods (June through October) Chicken of the woods is one of my absolute favorite mushrooms for beginner foragers. It’s virtually impossible to misidentify, it’s a favorite of all foragers, and even just one find is usually enough for several meals.

As chicken of the woods is a saprotrophic fungus, also known as a decomposer, you’ll find this mushroom growing on dead and dying trees, particularly oaks. Look for them in old growth oak groves on logs, stumps, and standing timber.

A few notes about consuming chicken of the woods: For the first-time consumer, it is suggested that one eats only a small portion. Some folks have reported minor adverse effects, primarily nausea, which resolves itself within a couple hours. Additionally, you may find chicken of the woods growing on hemlocks. It’s advisable not to eat these mushrooms, as consumption of chicken of the woods found on hemlock can also cause gastrointestinal upset. Lion’s Mane (April through October) The lion’s mane mushroom is an edible that grows on hardwoods, particularly beech trees. It’s a white mushroom and is typically found growing in a single clump. It gets its name from the fur-like appearance of its long, dangling spines.

The lion’s mane mushroom has a meaty texture, and some folks suggest it has a delicate seafood or crab meat flavor. For the best culinary experience, it’s important to harvest lion’s mane in its prime, when the whole mushroom is a pure, snowy white. If the mushroom is beginning to brown, it is past its prime edibility. That said, if you find a mostly white Lion’s Mane and want to bring it home with you, you can simply trim off the brown parts and cook with the rest. Chanterelle (April through October) Chanterelles are often found littering the forest floor, like a carpet of marigolds poking out from between the ferns. When you find chanterelles, it’s my experience that you often find pounds at a time. My personal record is somewhere around 60 pounds from just about an acre.

Aside from impressive numbers, the chanterelle is at the pinnacle of choice edibles, often commanding upwards of $25 per pound. They have a beautiful apricot scent and a light fruity flavor that lends itself well to all kinds of dishes—you’ll even find this mushroom pop up in the occasional dessert.

A few key identifying features: These vase-shaped mushrooms have false gills, which are wrinkles or ridges extending from the stem to the outer margins of the cap. These false gills are not easily removable, as are true gills. While the entire mushroom is orange or golden (or, in some subspecies red/dark grey), when pulled apart, the inside will be white and separate like string cheese. As noted above, fresh specimens have a sweet, mild apricot scent. Black Trumpet (June through September) There’s nothing quite like the black trumpet, a choice gourmet edible coveted by chefs across the country. I’ve never eaten a mushroom with quite the same flavor profile as a black trumpet—smokey, earthy, and a little sweet. Similar to truffles, black trumpets flip a switch in my palette that only they seem to have access to.

If you do go out in search of black trumpets (and you should), I’ve had luck finding them growing in mossy patches in hardwood forests, particularly around oak or beech trees. Often, I’ll stumble onto them while searching for their cousin, the chanterelle mushroom.

While black trumpets generally have no lookalikes (aside from perhaps the devil’s urn, which only grows on wood), I almost wouldn’t consider these a beginner mushroom for the simple fact that they are incredibly difficult to spot. Old Man of the Woods (July through September) Old man of the woods doesn’t get much attention in most foraging circles, but I think it’s a great beginner mushroom, particularly for those interested in expanding their foraging knowledge and dipping their toe into the world of boletes—there are very few mushrooms that can be mistaken for the old man of the woods.

The identifying features include a velvety, molted cap, the underside of which (like all boletes) has a pored surface--not a gilled surface. They have a shaggy stem and do not grow in clusters. They tend to bruise pinkish, then turn black when sliced open. I find these in the same hardwood groves as I do most of the other mushrooms on this list. 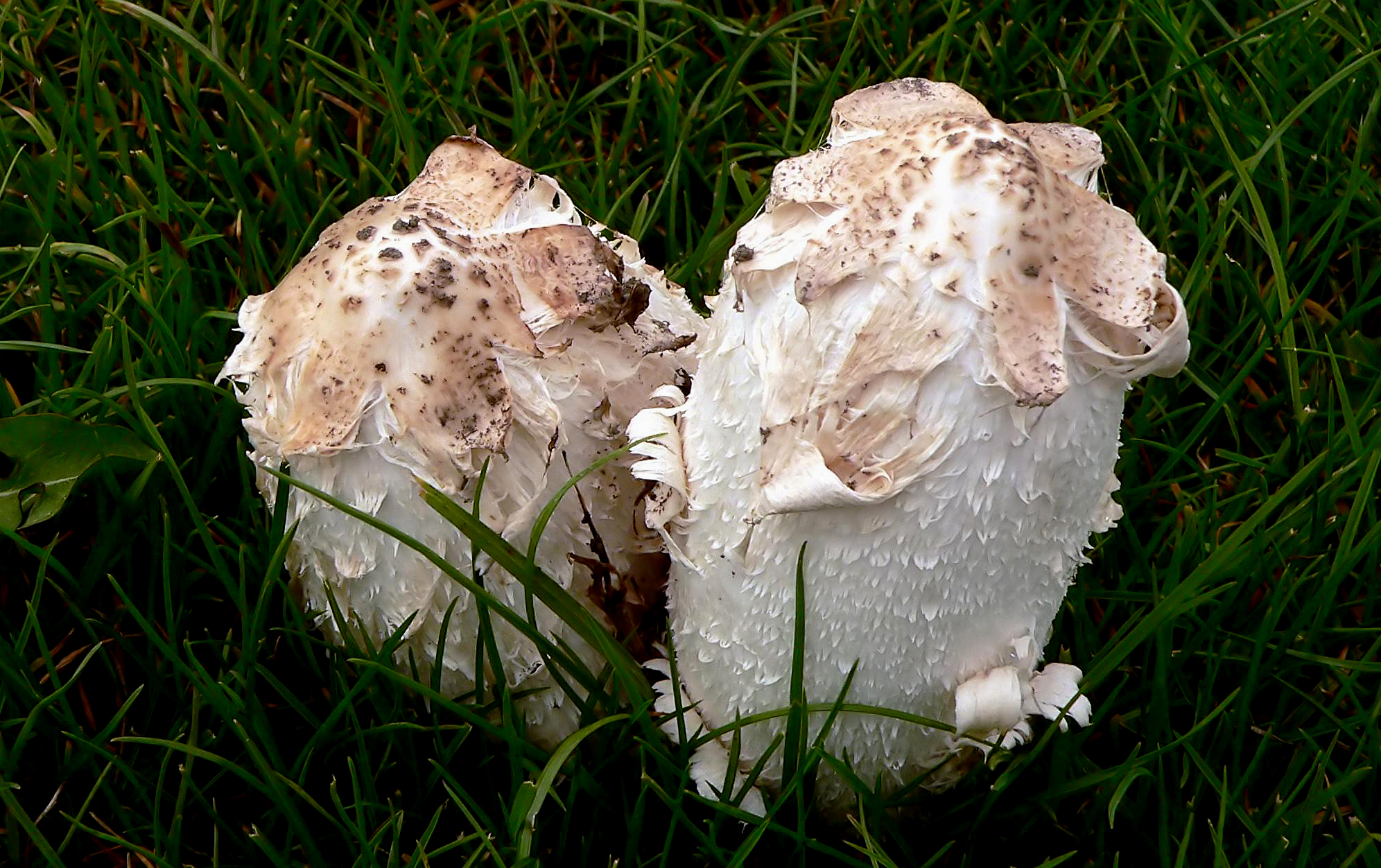 Shaggy Mane (April through November) The shaggy mane is a mushroom available to most folks across the country, commonly found growing in lawns, fields, and beside trails. They are white, oblong, and have a scaled cap, giving them a furry appearance, hence their name. You’ll often hear it referred to as a “lawyer’s wig,” a nod to its distinct texture and color.

Another identifying feature in more mature specimens is deliquescence. As a shaggy mane mushroom matures, it appears to dissolve into a black, inky liquid. While deliquescing mushrooms are past their prime in terms of edibility, they can be a helpful indicator that the mushrooms you’ve found are indeed shaggy manes.

An important consideration when consuming the shaggy mane is a potential interaction with alcohol. Some mushrooms in the Coprinus genus become mildly toxic when consumed with alcohol, resulting in nausea and vomiting. While the specific coprine toxin that causes this interaction may not be present in shaggy manes (as it is in their cousin and semi-lookalike, the inky cap), it is not suggested that you consume these mushrooms with any alcohol.

Forage Safely As always, it’s incredibly important that you take the time to positively identify any mushroom you intend to consume. This means consulting multiple field guides when identifying a given specimen. As the old adage goes: When in doubt, throw it out.

Shop All
Save this product
MeatEater Store
MeatEater Fire Breather Hot Sauce
$6.99
Thanks to the fresh pepper flavor with hints of garlic and smoke, this versatile hot sauce will kick up the heat level on just about anything, from unicorn shanks to jackalope roasts. Made in the USA. 5 fl oz
Shop Now
Save this product
Spiceology
4 Pack Seasonings Gift Pack
$35.99
Get the what you need to cover nearly any recipe in the kitchen. Designed tocover Fin, Fowl, Forage, and Fur these spices will step up your game in thekitchen with nearly any critter you bring home.
Shop Now
Save this product
Meater
Meater+ Bluetooth Thermometer
$99.99
With up to 165 ft Wireless Range, MEATER is the first truly wireless smart meat thermometer.
Shop Now
Save this product
Penguin Random House
The MeatEater Fish and Game Cookbook
$35.00
The definitive guide to cooking wild game, including fish and fowl, featuring more than 100 new recipes.
Shop Now
Save this product
MeatEater Store
MeatEater Smoke Signals BBQ Sauce
$9.99
This smokey, tangy, Kansas City-style BBQ sauce is perfect to serve alongside brisket, slather over burgers, or baste on a rack of brontosaurus ribs. Made in the USA.  12 fl oz
Shop Now
Save this product
Staub
Tall Cocotte 5 QT
$199.99
"I use my Staub dutch oven more than any other cookware during the winter for creating delicious braised wild game recipes." - Danielle Prewett
Shop Now
Save this product
Spiceology
Jean-Paul Bourgeois Seasonings 6 pack
$59.99
Thoughtfully curated by wild game connoisseur and MeatEater Chef Jean-Paul Bourgeois, these spices will have your taste buds begging for more. Submarine Designed with our swimming friends in mind, this blend boasts fresh green herbs like chive, marjoram, and parsley while packing a punch of garlic, salt, and chili flake. Other than the fish or seafood itself this is the only ingredient you need Game Changer Perfect on all game especially ducks...
Shop Now
Save this product
Benchmade
Essential Meatcrafter™️ Knife
$180.00
A hybrid hunting fixed blade with a fine, smooth edge to trim, debone, or slice your preferred cuts of meat. Makes just as much sense in the back of your truck as it does in the kitchen drawer.
Shop Now
Subscribe to Wild + Whole
Be the first to learn about Wild + Whole recipes, cooking techniques, and tips for growing or raising food to make you more confident in the kitchen, garden, and the outdoors
Privacy Policy

3 Wild Salad Greens You Can Find in Your Backyard

I know—it’s September and all you can think about is the negative space in your freezer and how you’re going to fill it with fresh game. We all have meat on the mind this time of year, but take a second and imagine something with me: It’s February and everything is frozen solid. You haven’t eaten a fresh vegetable in months. Anything green has been trucked in from who-knows-where. Most of your meals have been varying shades of brown with maybe a...

How to Harvest Chaga Mushrooms

The name “chaga” is a borderline buzzword these days. So, I feel it’s safe to assume you’ve either heard it or seen it on the label of some trendy health product. However, I’ve found that the actual organism is still pretty vague and mysterious to many people. I support its popularity wholeheartedly—it really is a treasure, but stardom can be a double-edged sword. People who personally experience the benefits of this mushroom will hopefully value...

How to Find One of the World's Most Expensive Mushrooms

Mushrooms can be expensive. Really expensive. It’s part of what makes foraging so attractive to me: the opportunity to work with the freshest, often prohibitively expensive, gourmet ingredients—all without spending a single dollar, besides the gas it takes to get there. One particularly coveted mushroom is available to us right now and I bet it’s one of your favorites. You’ll hear it called by different names: the French call it cèpe or cep, the...