Mushroom hunting runs deep in the outdoors adventure community. It’s a great way to get kids outside to learn about nature, and it’s a solid way to stock the food reserves. For me, there is nothing better than hiking through the woods, feeling the crunch of the duff under my feet, the wind on my face, taking in the smells as I scour the terrain for signs of fungi. It’s one of the most immersive and rewarding outdoors experiences you can have.

I’ve spent countless hours fungus foraging on good days and bad. Not every trip is successful, but I always learn something new that increases my mushroom knowledge and helps create future success. When I worked as a chef, I would spend my days off foraging for mushrooms, which I would bring back and sell to the restaurant for far cheaper than any other outlet we could find. It was a win-win situation—I knew that the product we were using was top notch and I was able to put a little extra cash in my pockets. On the best years I’d run hundreds of pounds of wild mushrooms through the menu. My favorite part was introducing the patrons to new mushrooms—in particular, the chanterelle mushroom. 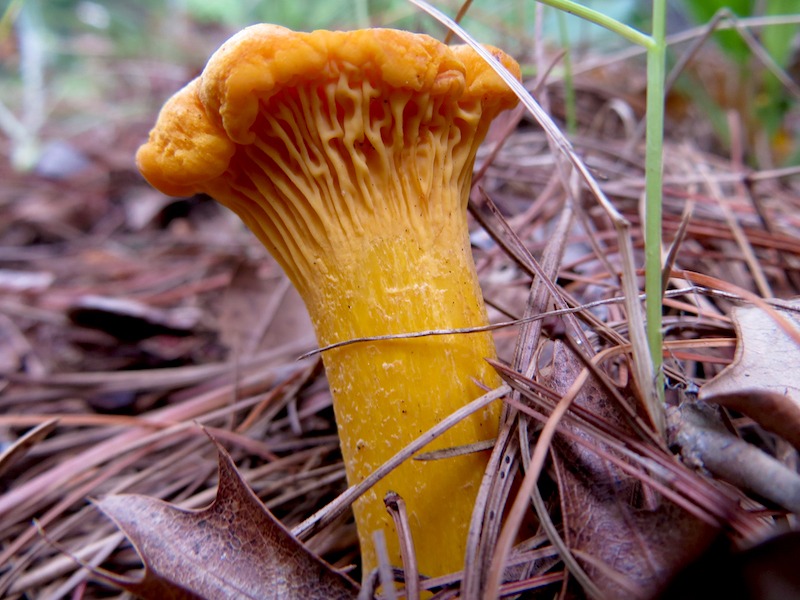 How to Identify Chanterelle Mushrooms
The morel may just be the most popular and well-known wild mushroom among outdoors people, but the golden chanterelle comes in a close second. Chanterelles are one of the most exciting edibles to forage. They stand out like a brilliant golden beacon amongst the natural landscape and emit an intoxicating aroma of sweet apricot and citrus. This smell is a dead giveaway and why the chanterelle is one of the easiest wild mushrooms to identify. Frankly, you could almost find them blindfolded using smell alone.

Chanterelles can grow to be huge, though on average they grow to 3 to 4 inches tall with an equal cap width. A distinct feature of this mushroom is the underside of the cap itself. Chanterelles’ “gills” are not like other gilled mushrooms, such as your store-bought crimini. The gills fold and weave into a forked and cross-veined pattern running down a portion of the stem. The stem is often the same color as the cap, or in some cases almost white to yellowish. Chanterelles can grow singly or in patches, both small and large.

Make sure to keep an eye out for lookalikes and always be confident of what you are picking. The same goes for any wild edible. Even though chanterelles are among the safest mushrooms to identify, they still have doppelgangers and some can cause trouble. So, when in doubt, consult a good mushroom foraging guide to be absolutely sure of what you are picking.

The most common lookalike is the Jack-o’-lantern. The main difference is that jacks always grow in large clusters, meaning all of the stems are connected somewhat at the base. Jacks do not have forked gills, do not bear the fantastic aroma of the chanterelle, and are generally bright orange. The jack-o’-lantern won’t kill you, but it’ll give you hell on the toilet. Another lookalike is the false chanterelle. Though not poisonous, it’s not that good to eat. 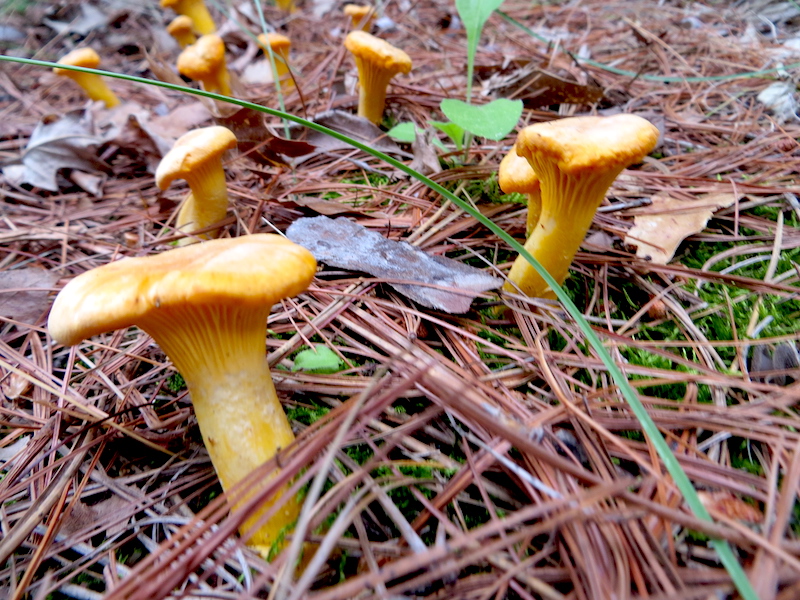 Chanterelle Mushroom Season
Heavy, consistent rain, interspersed with hot weather, is always a great sign that a good chanterelle patch will start producing. Chanterelles grow very slowly and require a lot of rain to really get going. Only when the weather begins to cool and dry out does this ‘shroom begin to stagnate.

Here in Minnesota, the season starts in late June and can extend into October if the weather cooperates. Prime time is in July and August. In California and the Pacific Northwest, the season starts in fall and runs into spring, allowing for some fantastic winter foraging. On the East Coast, the season runs through the summer, similar to the Midwest timing. At any given moment, there are chanterelles growing somewhere across the cooler regions of North America.

Some chanterelles can be buggy, especially later in the growing season. You may not be the first to reach the haul. Fear not, some of the “bugged out” mushrooms can still be salvaged for several applications and eaten. When a mushroom is unsalvageable from bugs chowing down, just toss it aside and move on. Remember, you aren’t the only one eating things that grow in the woods.

It’s always good to practice sustainable harvesting techniques when hunting any wild edible. Make sure to leave a few mushrooms, or fruiting bodies, here and there in your patch. As they mature and go through their natural cycle, they will release spores that propagate the area. When harvesting, it doesn’t matter if you cut the mushroom at the stem or pull the whole mushroom and trim the bottom. The mycelial network lies underground in a symbiotic relationship with the surrounding trees and will fruit again under the right conditions. Carrying the mushrooms in a mesh bag or woven basket will also release spores as you trudge through the woods. 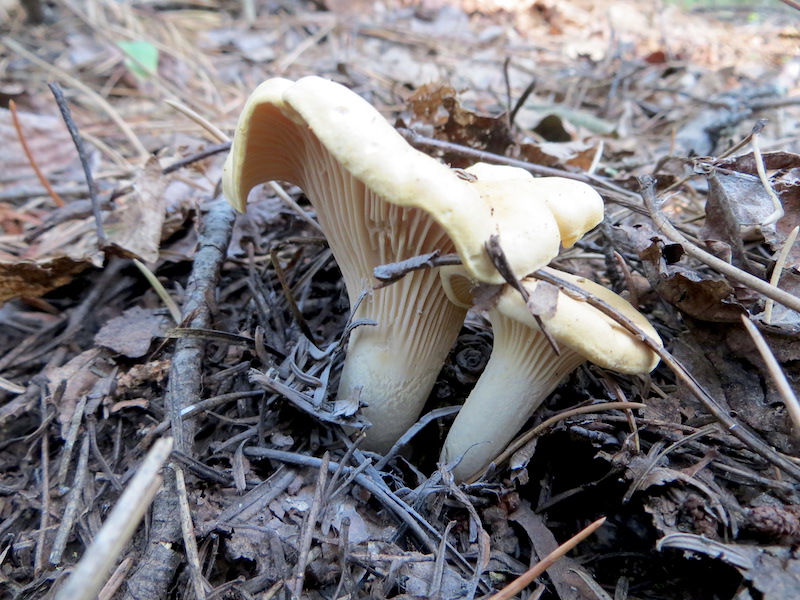 Where to Find Chanterelle Mushrooms
Chanterelles will often kind of find themselves if you learn to follow your nose. It all comes down to researching the areas to check out, and sometimes, a solid bout of good luck. Either way, when you do come across one, there’s bound to be a fair amount around.

Chanterelles thrive in both deciduous and coniferous forests. I’ve found pine groves and oak forests to be the most successful spots in the Midwest, so I tend to stick to similar areas when I’m scouting for new patches. The same goes for most areas in the U.S. Chanterelles prefer soil without too much nitrogen that drains well and stays cool.

The first chanterelles of the season tend to pop up along paths and game trails. As the season progresses, they spread into shaded forests. With a water content of nearly 90%, it’s essential for chanterelles to grow out of direct sunlight or they will become dry and leathery. Conifer stands and old growth oak forests are a staple no matter what part of the U.S. you’re foraging. These areas may be tried and true, but chanterelles have a tendency to grow in a variety of terrains, shaded hillsides, to beech forests, to the edges of waterways. This is due to the versatility of this mushroom and the many varieties of chanterelle that pop up during the foraging season.

Chanterelles are also common across the globe, showing up in South America, Europe, Asia, Southern Africa, and Australia. There is always a place where chanterelles are popping, waiting to be discovered and used in all sorts of cultural dishes and culinary traditions.

There are more than 50 different varieties of chanterelle. Some common species in our neck of the woods include the California chanterelle, the white chanterelle, yellow foot, cinnabar, and black trumpet. All are great to eat.

So as you head into the woods this fall, keep an eye to the ground and a nose to the wind. That might help you find bounty beyond deer and birds.

Stay posted for our upcoming guides to cooking and preserving chanterelles.

Spring might be the tastiest time of year for sportsmen. Spawning walleye hanging out in shallow...

Spring might be the tastiest time of year for sportsmen. Spawning walleye hanging out in shallow...

The 6 Ways to Carry Morel Mushrooms

As with any hobby, if you really want to get into mushroom hunting, you can always find ways to...

As with any hobby, if you really want to get into mushroom hunting, you can always find ways to...

Morel mushroom hunters disagree on plenty, like pinching stems, ideal soil temps, and the “pop.” But...

Morel mushroom hunters disagree on plenty, like pinching stems, ideal soil temps, and the “pop.” But...