How to Forage Hazelnuts

The closest I come to playing sports is foraging for hazelnuts. I tend to go belly-up at the whiff of competition, but everything in my DNA wants hazelnuts and wants them badly enough to stand my ground in the thicket even though every other animal there wants them, too. Squirrels, chipmunks, deer, birds, bears—the competition is formidable and frenzied.

Hazelnuts are such a coveted food that we all show up at the same time to stake our claim. It always feels so tenuous, like it could devolve into bloodsport at any moment, but we all just pick, giving each other the side-eye, in a surreal kind of interspecies armistice. I’m still an underdog, but I manage to sneak off with a basketful most years. Here are a few tricks I’ve learned if you dare enter the arena. 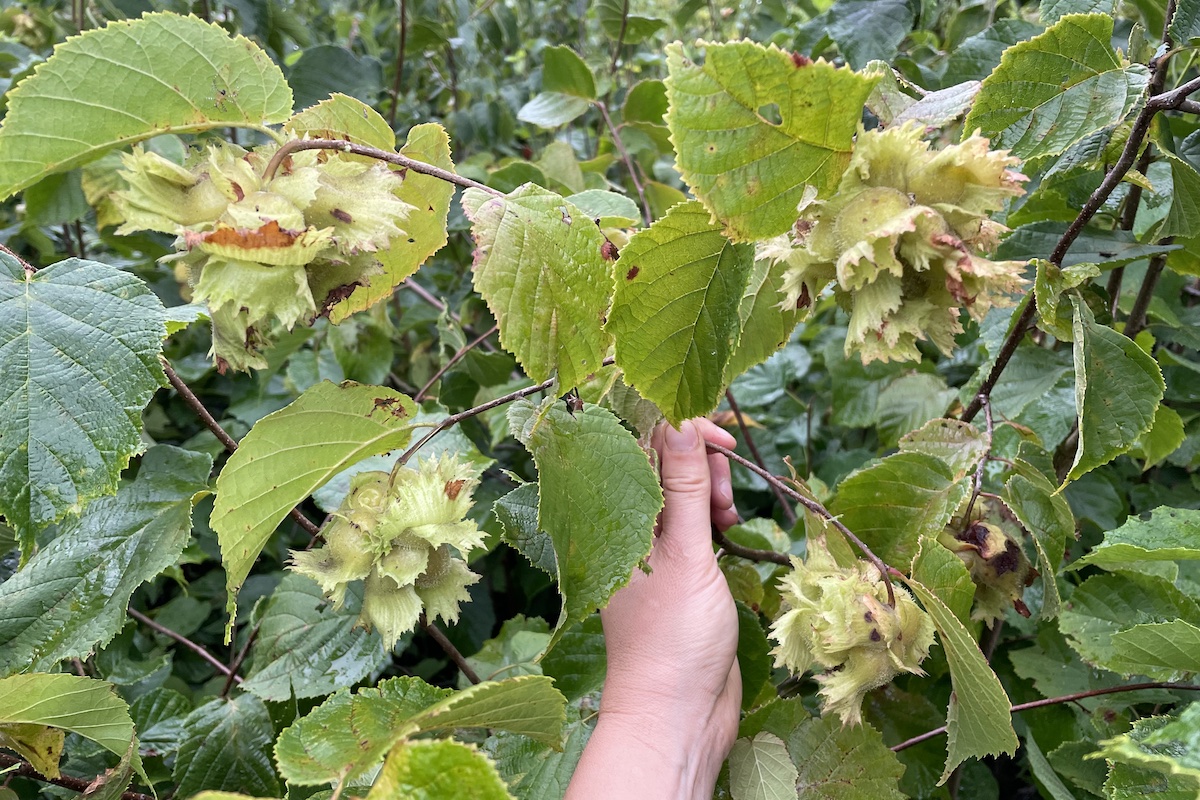 How To Find Hazelnuts

North America is home to two species of native hazelnuts, which are both abundant within their range and equally delicious. If you draw a line from northern Florida, diagonally across the U.S. up to Oregon, Beaked Hazelnut (Corylus cornuta) exists in nearly every state northeast of that line and up into Canada, while the American Hazelnut reigns supreme over the entire eastern half of the U.S., meaning that unless you’re in the southwest quadrant of the country, you’ve got hazelnuts near you.

I find hazels thriving along the sunny edges of a wide variety of disturbed habitats including but not limited to trailheads, trail edges, utility lines, fields, railroads, burn sites, logging cuts, log yards, fencerows, river valleys, and the like, especially in the presence of oak/pine/hickory forests. I’m told by reputable sources that in the west, beaked hazels are also often found near birch and aspen.

The thing about hazel shrubs, though, is they’re kind of wallflowers—a little shy. Even for me, someone who has spent the majority of my life paying close attention to plants, they still blend into that ubiquitous “wall of green” that many people struggle with seeing when they look out into a field or forest. Nothing about them really grabs the eye, until that brief window when they’re loaded with nuts, then everyone is gawking.

The shrubs of American and beaked hazels look nearly identical, the obvious difference being only in the husks of the nuts. The husk (a modified leaf, or involucre) of the beaked hazelnut is long, tubular (hence, “beaked”), and covered in tiny spines, while the husk of American hazel is short, ruffled, and mildly sticky. Both species of nuts are born in clusters of reportedly up to 15, but I almost always see beaked hazelnuts born singly or in pairs, rarely triplets, whereas Americans are usually in clusters of up to ten.

Aside from those striking differences, both species are remarkably similar, being small to medium, multi-stemmed, thicket-forming shrubs. They have smooth, gray/brown bark and leaves are green, a bit fuzzy, ovate, deciduous, simple, and irregularly toothed, arranged alternately on zig-zagging branches. The twigs of American hazel are covered in tiny, sticky hairs, just like the husks.

Hazels have both male and female flowers that emerge in early spring before the leaves. The male flowers are catkins that are present on the twigs for many months before they elongate and drop pollen as the tiniest, red female flowers open. They’re wind pollinated and produce way more flowers in sunny spots, so, although you may see hazel shrubs scattered in the understory of some forested areas, they won’t form thriving thickets there and likely won’t bear nuts unless they’re on the edge or in an opening where they get good sun exposure.

This makes them convenient to find as they tend to grow on the edges of places that we’re more prone to walk, as opposed to way out in the dense, dark woods or on top of a mountain. So, next time you go for a walk, instead of looking straight ahead or up or down, try scanning from side to side at about eye level, and you might be surprised at what’s been hiding in plain sight. 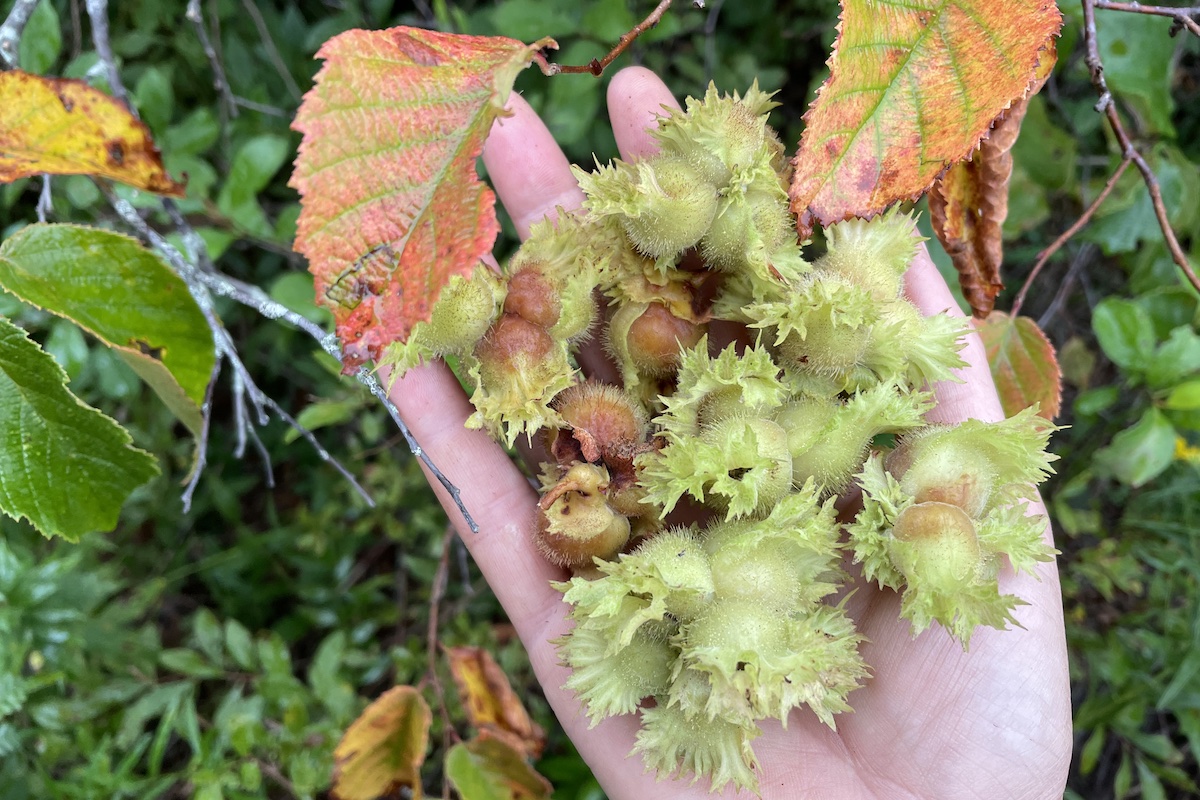 How to Forage for Hazelnuts

Now the fun part. You’ve found and identified your hazel shrubs and their limbs are loaded with big, fat clusters of nuts—this is more than half the battle. If there are clusters of nuts present, the husks are probably still green, which leads many people to assume the nuts aren’t ripe yet, but this isn’t always true. You can peel back the husk to peek at the nut inside, and if the shell inside is tan or brown, they’re ready to pick.

In a world without other hungry animals trying to fill their fat stores with hazelnuts, we could leave the nuts on the shrubs until the shells and husks turn fully brown and dry, but this is not that world, so we pick a moment early. The tender-handed may want to wear gloves to pick beaked hazelnuts due to the sharp hairs on the husks, which can be irritating to the skin, though only temporarily. If any of the clusters don’t come readily off the limb, give a little twist as you pick to avoid damaging the shrub.

Once you’ve got your bounty home, there are a couple of options to make husking easier. For American hazelnuts, I like to spread them out on screen drying racks, somewhere dry and rodent safe, for a couple weeks until the husks are dried and crisp. This helps to ripen any underripe nuts, cure them for storing, and makes them fall freely from the husks. I used to just husk them by hand at this point, but thanks, once again, to the brilliance of Sam Thayer, I’ve sped up this process immeasurably by dumping them from the drying racks into a half barrel and squashing them with my feet like stomping grapes, which squeezes the nuts right out of the husks where they fall to the bottom of the barrel.

After pawing through the husks quickly for any clingers, I set aside the husks and pour the nuts into jars, where they’ll store for many months and even years. For beaked hazelnuts, which I’ve not ever collected in large enough quantities to warrant bulk processing, Sam likes to remove the prickly husks by burying the nuts in the mud for one month and praying the rodents don’t find them, which apparently he’s not had a problem with. After a month, the husks have pretty well disintegrated, and the nuts are left perfectly intact and just need a good rinse before going to the pantry.

I honestly can’t discern a difference in flavor between the two species and I use them in the kitchen interchangeably. They’re both sweet, toasty, rich, and crunchy and can be used in any recipe that calls for storebought hazelnuts or filberts. They can be blended, shell and all, with water, and simmered with warm spices and a little maple syrup for the most luxurious nutmilk you’ve never dreamed of.

They can be toasted and mixed into granola, cookie dough, cake batter, or ice cream. They can be blended into savory dips and sweet, creamy spreads; you’ve probably heard of Nutella? That flavor bombshell is all hazelnut. They can be snacked on with fruits, cured meats, and cheeses. They can be crushed and sprinkled over salads, roasted vegetables, gamebirds, and fish.

I dabble in all of these and relish them all, but the large majority of my hazel harvest every year is savored right out of hand. I like to keep a bowlful on the table just for sitting around and cracking on those long, winter nights and thinking about how fun it was to find them. 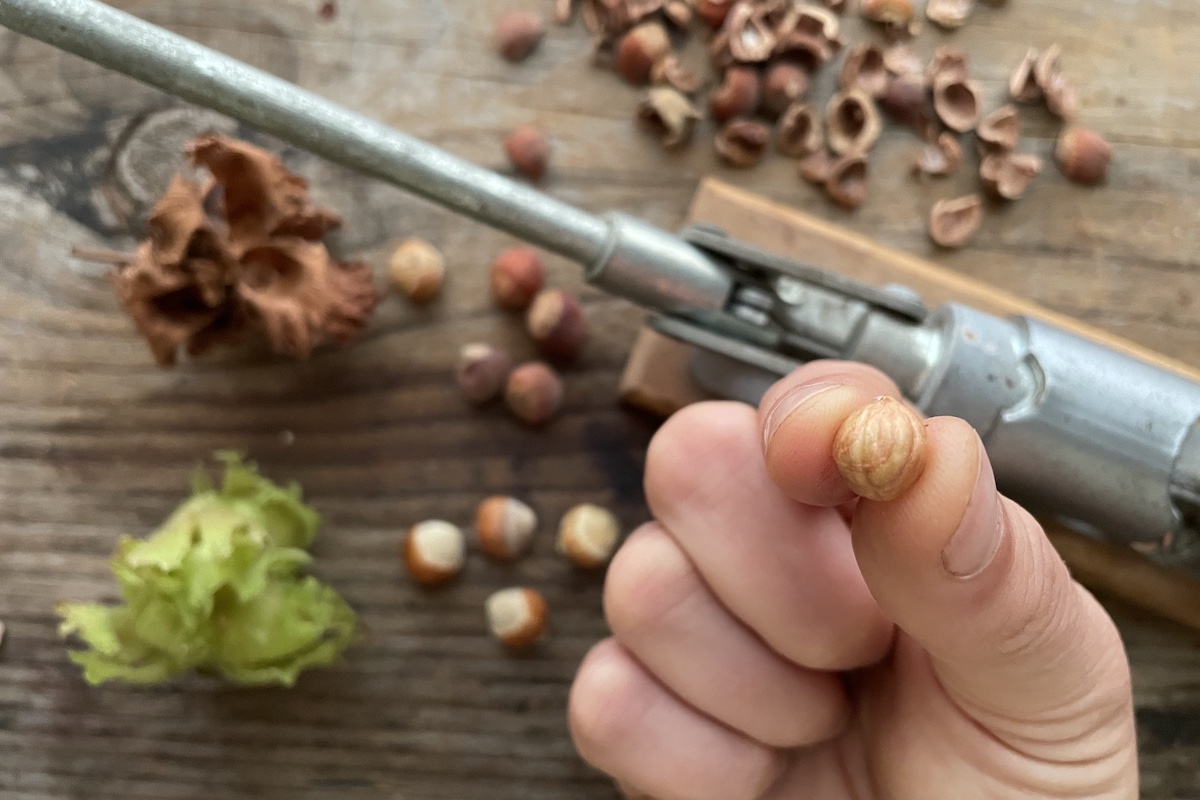 Save this product
Spiceology
4 Pack Seasonings Gift Pack
$35.99
Get the what you need to cover nearly any recipe in the kitchen. Designed tocover Fin, Fowl, Forage, and Fur these spices will step up your game in thekitchen with nearly any critter you bring home.
Save this product
Staub
Braiser 3.5 QT
$329.99
A featured piece in the kitchen of Chef Kevin Gillespie, the Braiser has broad functionality from freezer to oven to table.
Save this product
Staub
Tall Cocotte 5 QT
$199.99
"I use my Staub dutch oven more than any other cookware during the winter for creating delicious braised wild game recipes." - Danielle Prewett
Save this product
Penguin Random House
The MeatEater Fish and Game Cookbook
$35.00
The definitive guide to cooking wild game, including fish and fowl, featuring more than 100 new recipes.
Subscribe to Wild + Whole
Be the first to learn about Wild + Whole recipes, cooking techniques, and tips for growing or raising food to make you more confident in the kitchen, garden, and the outdoors
Privacy Policy

How to Forage for Wild Grapes

When I was a kid, grapes always seemed way out of my league—totems of opulence only to be hand-fed to goddesses and satyrs, on some faraway land, in some faraway time. It took me an embarrassing number of years to recognize the vines, draped like velvet ropes with their pendulous clusters of fruit, twining through every thicket of my own hometown. The shabby setting just didn’t fit the lurid scene I’d set in my mind, but there they were, dangling...

How to Forage for Wild Cherries

If you did your due diligence this spring and took note of where all the white flowering trees and shrubs were, you’re likely starting to see the fruits of that labor, now. Juneberries have come and gone, mulberries too, and next we begin checking hedgerows for stonefruits, including one of my very favorites—wild cherries. There are a handful of native cherries in North America and most people call them “bird cherries” and say they’re too bitter...

How to Forage for Evergreen Tips

Spruce tips have been having a culinary moment for a few years now, which I love and understand—they are delightful, but I don’t know why the spotlight hasn’t expanded to include the tender tips of all our other evergreens, too. Pine, fir, and hemlock are easier to access for most people in the Lower 48 and can be used in similar ways. If you’ve wanted to bring home the flavor of the evergreen woods but you’ve tasted a needle and were put off by...