What to Do When You Plan on Getting a Deer Mounted

When the Boy Scouts of America was founded in 1910, there were 57 attainable merit badges. The first one of the group to be dropped, due to lack of interest, was the taxidermy badge in 1952.

Although millions of scouts worked through the seven ranks during that time, only about 10,000 ever acquired the not-so-coveted taxidermy badge. This spoke volumes to America’s lack of interest in stuffed animals, which was mostly thanks to the industry’s horizontal movement for decades.

Then, in the 1970s, a revival was born when the National Taxidermy Association was formed. Technological advances made at-home taxidermy more attainable, which ignited national competitions, dedicated magazines and devoted schools. Suddenly, taxidermy wasn’t just for museums.

Today, hunters create their own museums with skulls and rugs to commemorate the animals and memories of the hunt. Those of us who plan on getting a full shoulder mount usually rely on a professional to create the final masterpiece. However, a hunter’s responsibility for the end product is more than just pulling the trigger.

“On average, each year I have to come up with replacement capes for half of my customers,” said Matt Gonsor, owner of River Valley Taxidermy in Baltic, S.D.

This frustrating truth stems from avoidable mistakes that a lot of hunters make after a successful shot. Bringing in a damaged cape is a downer for your taxidermist and your wallet. Here are a few rules to keep in mind.

Protect the Cape
Getting your Booner from field to truck just so happens to be one of the best times to ruin a hide.

Never drag your deer by its back legs, which causes large amounts of friction between the ground and the deer’s cape. Drag the buck by its antlers or front legs instead, as dragging a deer “with the grain” of its fur is not only easier in the long run, but it also helps keep the deer’s shoulders, neck and head—the parts used to create a shoulder mount—off the ground.

When it comes to butchering your buck, never hang it by its neck. The stress of the rope on the deer’s hair and hide can cause irreversible damage. Hang it by its back legs instead, but don’t cut the throat to bleed the deer out.

“A good taxidermist can fix a deer that’s been headshot, but not even the best taxidermist can’t use a cape with a 10-inch cut in its throat,” said Josh Neuharth, owner of Western Wildlife Creations in Menno, S.D.

Another issue that taxidermists often see is when hunters make cuts from the wrong side of the hide. If you’re caping out an animal, always make your slices from the inside out. This is good for your mount, and good for your meat.

Don’t go through all the work of skinning your buck to only realize that you didn’t leave enough skin around the brisket, either. It’s an issue that plagues many hunters.

“The most common problem I encounter is people not leaving enough cape on their deer,” Gonsor told me. “My rule of thumb is to start skinning from the middle of the belly and tube skin up as far as you can before cutting off the head.”

A common misconception is that you should salt the hide if you’re not immediately taking it to the taxidermist. Salting is useful on remote hunts to deter bacterial growth, but prolonged exposure to salt dries out the cape and causes issues for fleshing.

If you do salt the hide, make sure you communicate that to your taxidermist. Otherwise you risk having it ruined while in storage.

Instead, make sure you get your cape in a freezer or cooler. If it ends up in a cooler, absolutely don’t let it come in contact with ice or water.

“Melting ice inside a cooler on a hot day is a breeding ground for bacteria, which can cause hair-slippage with the cape,” Neuharth said. “Keeping your hide cold is a must, but don’t screw it up by letting it get wet.”

When going in a freezer, it’s crucial that you don’t let the cape sit in a wrinkled position. This will be noticeable later when it comes time to thaw it. Although the freezer is there to protect the hide, it can also damage it.

If you freeze it with skin touching hair, this can cause hair loss. You can also damage delicate parts of the deer, like the nose and ears, if they become freezer burned. To prevent this, there’s a three-step folding method that taxidermists like to use. 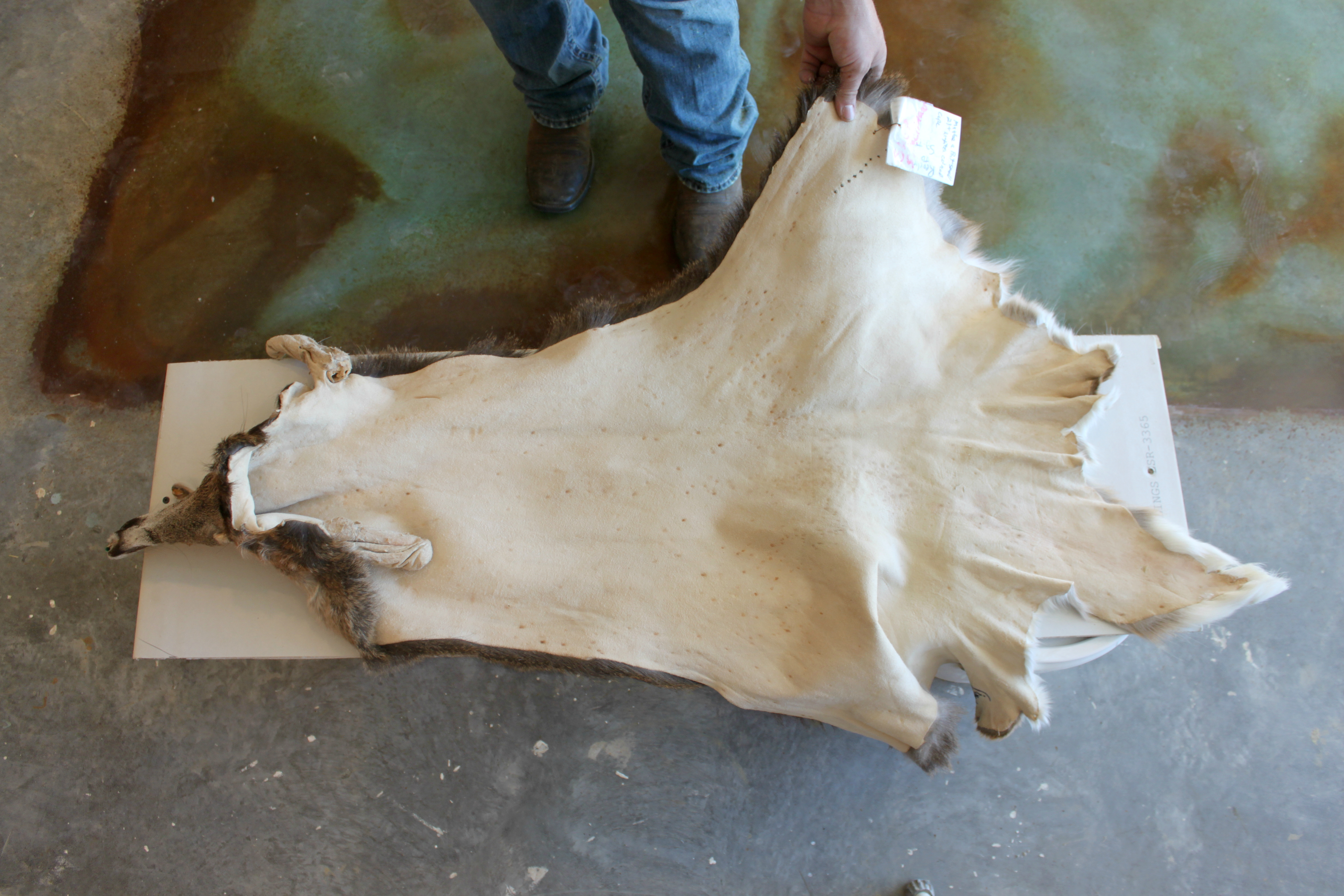 Fold 1 (skin to skin): Fold the cape the short way. 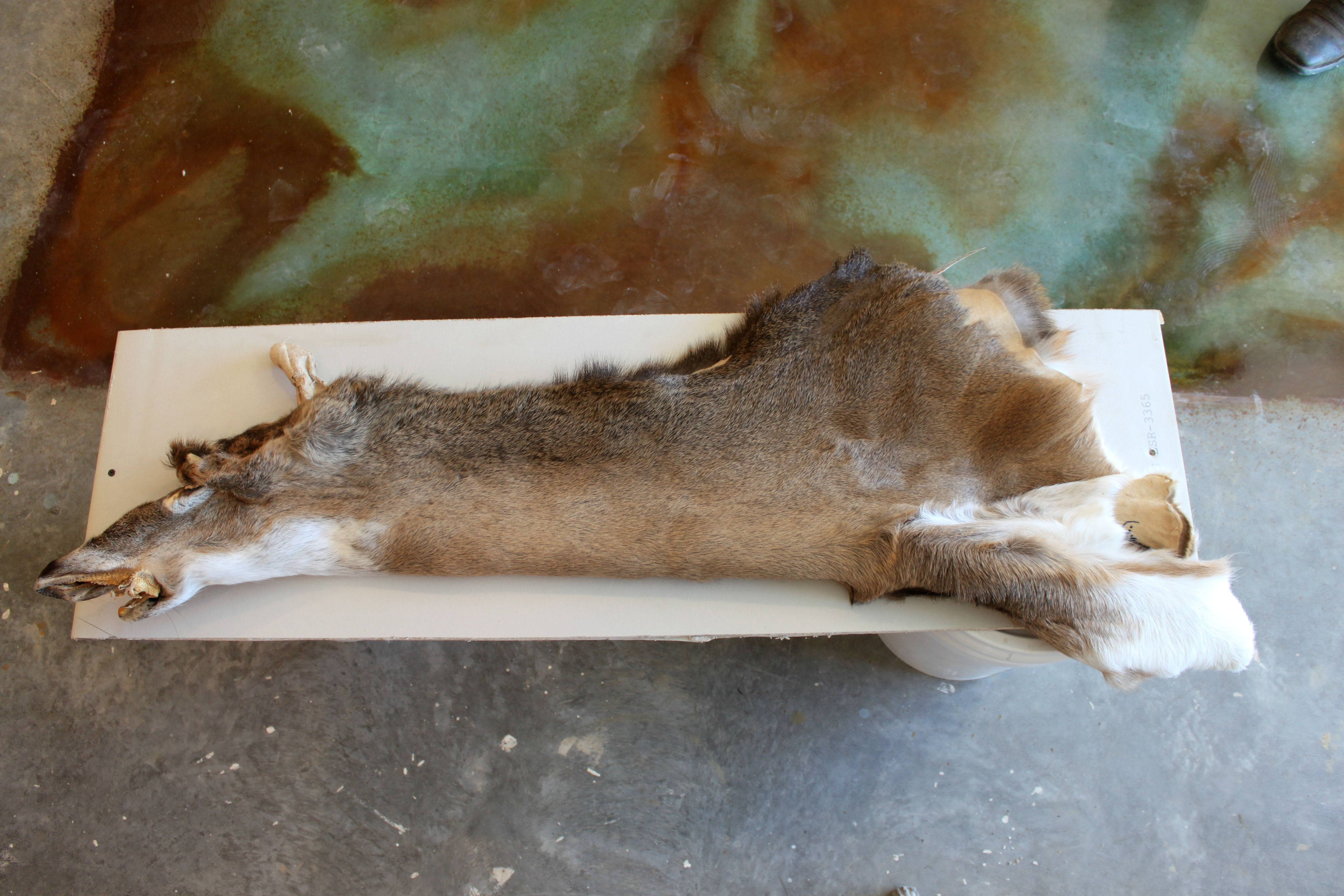 Fold 2 (hair to hair): Fold the cape the long way, with the head extending beyond the brisket. 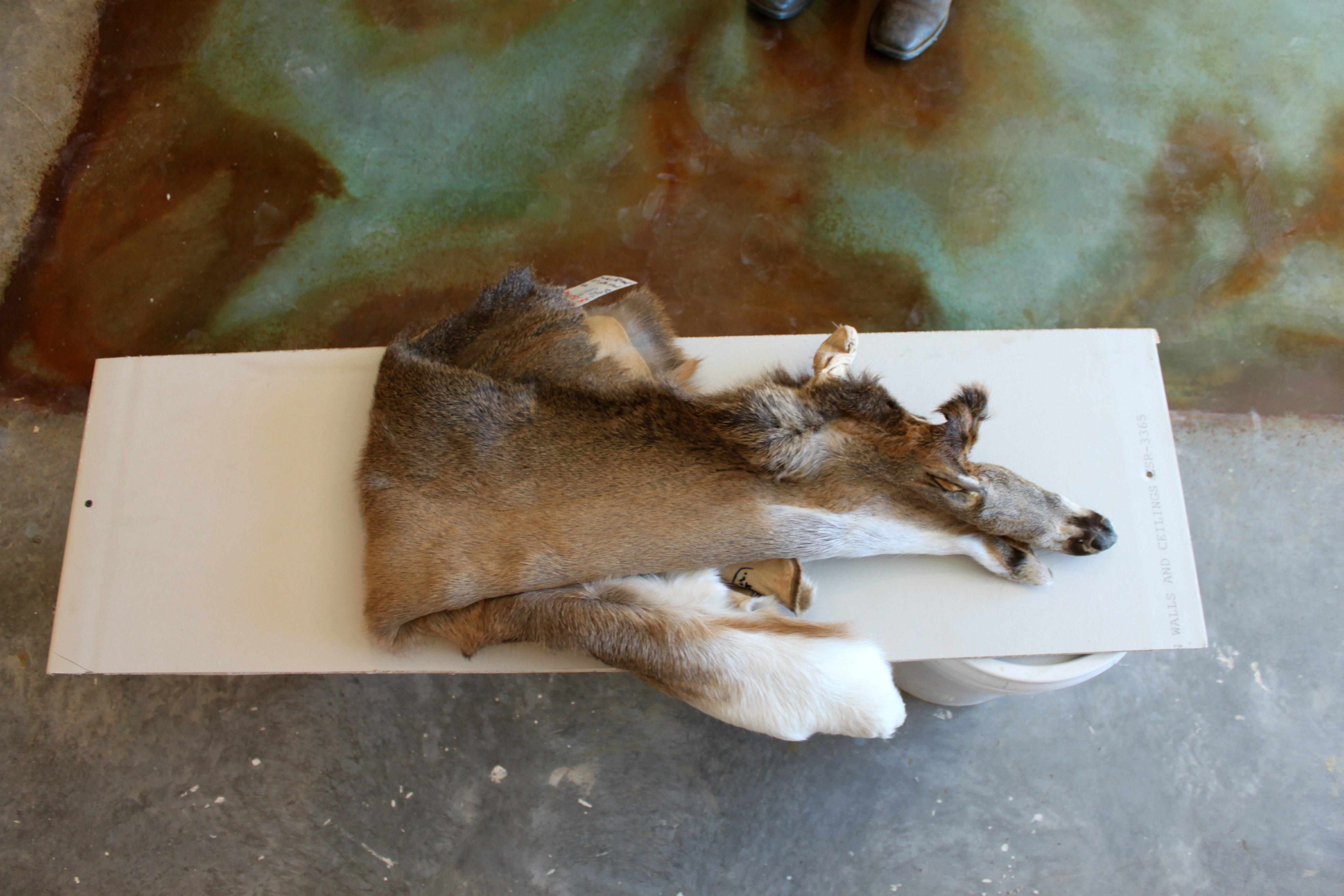 Fold 3 (hair to hair): Fold the head back the opposite direction and tuck the nose under. 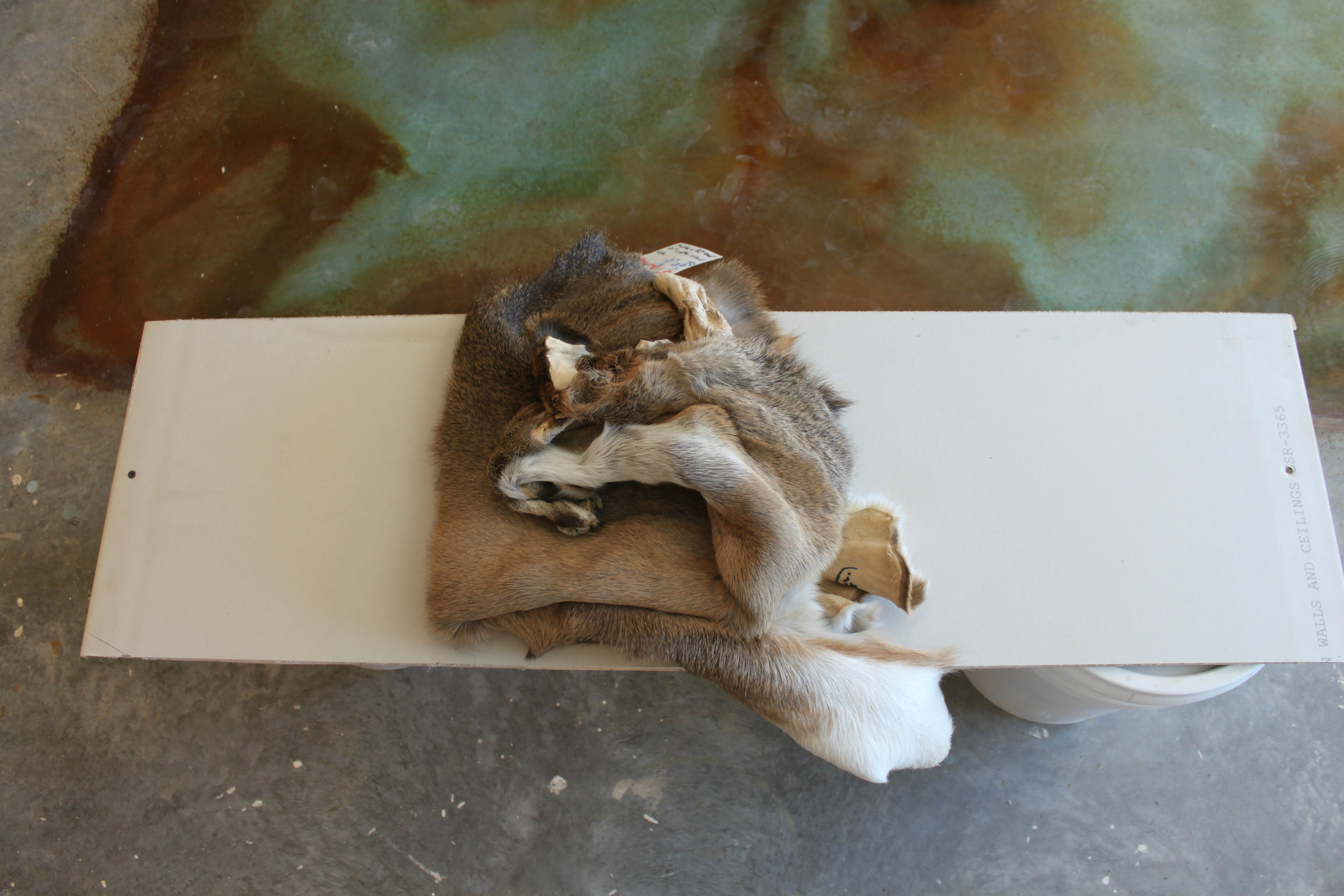 If you take this approach, wrap it in garbage bags and place in a spot where it can sit flat. Don’t stack other items on top of the cape, either.

Maybe most importantly when it comes to helping out your taxidermist is to stop what you’re doing if you’re not confident.

Both Gonsor and Neuharth stressed that the best option is to always get your deer to the taxidermist as quickly as possible. Let their surgical hands do the job, rather than your clumsy, excited ones.

Shop All
Save this product
First Lite
Corrugate Foundry Pant
$195.00
"These are hands down the best hunting pants I have ever worn. That's the flat truth." - Steven Rinella
Save this product
Benchmade
Steep Country Knife
$162.00
A versatile fixed-blade capable of performing throughout any season, on any species.
Save this product
First Lite
Origin Hoody
$160.00
A lightweight, quiet mid-layer designed to be utilized as both an outerwear piece as well as a layering option as temperatures drop.
Save this product
FHF Gear
Bino Harness PRO-M
$125.00
Made with high-quality, durable Cordura, the FHF Gear Bino Harness is designed to be quiet, lightweight, low profile, modular, and easily operated with one hand.
Get the latest in your inbox
Subscribe to our newsletters to receive regular emails with hand-picked content, gear recommendations, and special deals.
Our picks for the week's best content and gear
For the whitetail obsessed, with Mark Kenyon
Redefining our connection to food, with Danielle Prewett
Your one-stop for everything waterfowl, with Sean Weaver
Get out on the water with the MeatEater Fishing crew
Technical hunting apparel
Purpose-built accessories for hunting and fishing
Quality elk, turkey, waterfowl, and deer calls
Privacy Policy

Occasionally a hunter will be lucky enough to harvest an animal that inspires such strong emotion, they want it to live on through taxidermy.  When the time comes for you there is a certain process that needs to be followed so that the taxidermist can do their job properly. It’s important to skin big game properly in the field for taxidermy or tanning. Starting the Process When dealing with horned or antlered game, start by gutting the animal and...

Ask MeatEater: What Power Binoculars Do You Use?

If I could only have one set of binoculars for the rest of my life, I would carry 10x50s. This size has an excellent field of view, with enough magnification to get the detail needed to find an antler tip in the sage brush. The range of binocular choices and manufactures are wide and the decision making process can appear complicated. But if you can be honest with yourself, picking your binoculars is damn simple. What do you do the most, how...

Whitetail deer are widely available across the U.S. with many most states having seasons for them.  These deer can be hunted in a wide variety of different ways, depending on the area you find yourself hunting in.  No matter what style hunting you choose for these animals, you will find that whitetails are addicting. Ambush Hunting Ambush hunting is by far the most common whitetail strategy, with most whitetail hunters preferring to ambush the...