Occasionally a hunter will be lucky enough to harvest an animal that inspires such strong emotion, they want it to live on through taxidermy.  When the time comes for you there is a certain process that needs to be followed so that the taxidermist can do their job properly. It’s important to skin big game properly in the field for taxidermy or tanning.

Starting the Process
When dealing with horned or antlered game, start by gutting the animal and then clean the surroundings of blood and grime so that your cape stays as clean as possible.

Make a circumventing cut around the torso of the animal. This cut should be in line with the bottom of the animal’s sternum. A common mistake is to make this cut too far up the body, or closer to the neck, which leaves the taxidermist insufficient hide for a shoulder mount.

If you are packing the whole head out, you can stop cutting hide at this point. Skin the hide away from the upper torso and neck up to the back of the jaw; sever the head from the spine at the first vertebrae and neatly bundle the hide and head as one package.

Caping the Head
If you are fully caping the animal’s head, i.e. removing the skull), start at the end of your cut and make two separate incisions going to each antler or horn base.  Your cuts will resemble the letter Y.  Be very careful not to cut the hide as you skin around the base of the antler or horn, as the hide is strongly connected here and difficult to work with.

A good trick is to just get a small piece started with your knife and then just pull the hide with your fingers or work it free using a regular screwdriver or the flat driver bit on a multi-tool.

As you continue skinning the head, take extra care around the eyes and glands.  These areas have recesses where the hide is folded and tucked; haste will result in an unwanted hole.  Keep skinning until you reach the gum line.  With some careful slicing, the cape should now freely slide off of the skull.

Removing excess flesh from the cape will lighten your load and help prevent spoilage.  Capes should be taken to a taxidermist as soon as possible. If the taxidermist or tannery is more than two days away, freezing the cape is a good option. Do not salt the cape unless it has been thoroughly fleshed from shoulders to nose.

Skinning a Black Bear
To skin a black bear for tanning or rug-making, continue the gutting incision all the way to where the jaw begins.  Then make cuts along the underside of each leg, starting at the center of the paw and running up to the gutting incision. Do this for both the front and hind legs.  Then simply skin the hide away from the animal. 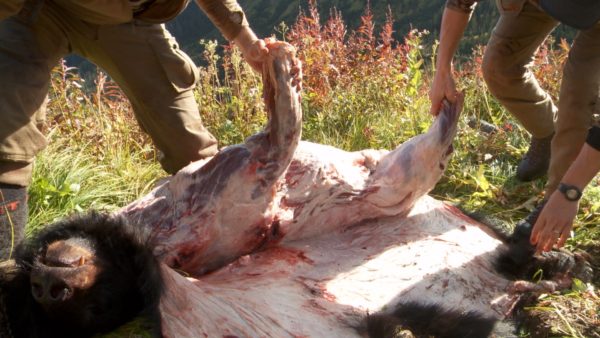 Cut the head off at the back of the skull, so that the whole skin-on head stays with the hide.  Sever the tailbone at the base and leave the bone-in tail connected to the hide. The most difficult part of the job is severing the paws from the legs at the wrists without damaging the hide. Do not attempt to skin your bear’s paws unless you’ve been trained by someone with considerable experience. Skinning the head is a tad easier, but it’s best left to a professional unless a professional has shown you how to do it.

Western big game hunts are no walk in the park, so here are three tips to help you out. It may not be hunting season now, but it’s never too early to start learning the country that you’re going to hunt. And when the time comes—get there early, stay late, and always keep a weather eye on the horizon.

The work of hunting does not end with a kill. In some respects, it’s only just begun. You owe it to the animal, and to yourself, to make sure that the carcass is handled as carefully as possible to ensure quality meat. Regardless of whether the animal will be skinned and processed in the field or at home, it needs to be gutted immediately. Big game should be gutted as soon as possible, preferably within an hour of the animal’s death. All big game...