How to Pull off a Successful Cast-and-Blast Float

Ask my friends and they’ll likely tell you that I have the annoying habit of always trying to tack fishing on to a hunting trip or hunting on to a fishing trip—even when that doesn’t make a lick of sense. Add foraging (which we’ve dubbed cast and grasp) and I’m truly in heaven. It’s like each added element of adventure and additional species to pursue increases my enthrallment exponentially.

Cast-and-blast floating is a tradition in my family and that of my best buddy, dating back long before either of us were born. It has certainly grown in popularity but remains none the less effective. While waterfowlers bang away in fields and upland folks comb the hills, angling-minded hunters can find untouched oases along river corridors.

Once I’m tagged out or big game season ends (whichever comes first), I’m ready to go whole hog on trout-walleye-duck-goose-pheasant-grouse combo floats on my favorite rivers. But it’s rarely enough to just splash a driftboat and hope for the best. Cast and blast trips can be very simple and budget friendly, but it makes a world of difference to plan ahead.

Which Water?
Come December, many rivers across the northern half of the country are starting to resemble gas station slushy machines. Let me be perfectly clear: you do not want to float alongside ice chunks. Your reenactment of “Titanic” is likely to play out like the original. Flies and lures won’t sink, the ducks won’t sit there, and you might die.

The glaring exceptions to this rule are tailwaters, rivers that flow out of dams. Because the water flows out the bottom of a reservoir it remains a consistent temperature year-round and won’t usually start freezing for a ways below the dam, relative to ambient temperature. And, being the only open water available when it’s really cold, tailwaters often become magnets for migratory ducks and geese, as well as the best option for winter trout fishing.

However, if you live further south or it’s a mild winter, you can take your pick of rivers, sloughs, creeks, or even lakes and ponds. When the options are plentiful, there are a few factors that can help you winnow. First and foremost, seek floats that are harder to access or generally see fewer floaters. This idea of shooting ducks while trout fishing is by no means a new one, and the local waterfowl tend to figure out really fast that driftboats spell death.

The famous fishing floats might not be the best call if for no other reason that blasting shotguns won’t make you popular with the other boats. Look for stretches off the beaten path, with hand launches instead of ramps, or any element that makes them slightly more onerous to the average sportsman. Waterfowl are more likely to accumulate in these areas and might not be expecting you to slip stealthily around the bend. You might have to run your own shuttle, but it can be worth that extra time.

On a closer view of the map, look for side channels and back eddies. While diver ducks may be comfortable along the main current, Canada geese and puddle ducks greatly prefer still or slower water. They’ll amass in these specific locations, especially where there’s a little sand or gravel bar to haul out on. It’s a good practice to mark such slow water zones on your map so that you can approach them quietly and out of sight. It’s easy to jump ducks, but a lot harder to jump them in scattergun range.

Fish too will tend to tuck out of the main flow in winter, either to avoid scouring ice or in relation to spawning. Brown, brook, and bull trout mate in mid to late fall, and rainbows and cutthroat in early spring, so all of them are often associating with side channels and creeks this time of year. The same could be said of walleye and pike. Deep, slow pools and back eddies will often collect fish as well as ducks while all the above seek to hunker down and slow-burn their precious calories.

What Watercraft?
If you have a fancy, tricked-out, $30K jet sled, you already know you want to get it wet. If you can borrow a beat-up old canoe from a buddy, that will work just as well—if not better. A quiet approach and a low profile will serve you well for sneaking on wary, late-season ducks and geese.

All that said, whatever watercraft you have access to should suffice. I’ve killed ducks and caught fish out of driftboats, rafts, kayaks, canoes, and many more. While motorboats certainly provide advantages for getting where you want to be quickly, stealthy they are not. It’s also illegal to shoot birds from a vessel under power from an engine in many states.

On that point, you shouldn’t take lightly the effects of touching off a 3 ½-inch #2 12-gauge shotshell while seated in a small, narrow boat. It could turn you turtle if you’re unprepared and unbalanced. As with all boating skills, this requires practice and situational awareness.

If you’re planning to run an unfamiliar stretch of stream, make sure to look at the map or read up online to see if any obstacles exist. If there’s a tricky stretch of whitewater, a canoe might be a bad idea unless you have a high degree of paddling skill and confidence. On the other side of the coin, a major blockage, diversion, logjam, or mandatory portage might make a light canoe a better call than a heavy driftboat or raft.

No matter your vessel, a life vest is never more important than in the winter. You’ll likely want to wear waders, which can be incredibly dangerous if they fill with water if you aren’t wearing a PFD. Make sure to also use your wader belt and cinch it tight.

The Fishing
While the occasional warm day or midge hatch might get fish on the move, by and large, cold weather will keep most species kegged up in deep holding water. Adapt your presentations to reach down into the lower third of the water column so fish don’t have to exert much energy to chase it.

For walleye, smallmouth, and their ilk, a slow-rolled swim jig or tube can be just the ticket. These “warmwater species” are especially prone to schooling up in distinct pockets, so when you find such a place it can pay to park there and work it well. Wintertime walleyes will often bite so softly as to be undetectable. Tipping your hooks with a chunk of worm may provide that extra split second you need to get the hook set. A small, sharp stinger hook is never a bad idea for short strikers, either.

Trout, on the other hand, are often more comfortable with declining mercury readings. While dry fly fishing might not be the best choice unless you’re seeing risers, many of the same tactics you’d employ the rest of the year can be adapted to winter. Nymphing is often the name of the game and it’s useful to do it deliberately and with enough weight to really get down. Zebra midges, wire worms, pheasant tails, and stonefly nymphs are high-confidence patterns for me.

Active-retrieve presentations also have their place in winter, but it’s usually either on or off. A spike in the temperature seems to turn on chase behavior, but that isn’t a hard and fast rule. I’ve seen Vibrax spinners, Lil’ Cleo spoons, and Rapalas perform very well on very cold days. Likewise, streamers are always worth a shot—but you’ll likely know pretty quickly whether they’re going to perform. I tend toward the smaller end of the spectrum in cold weather, but that’s not to say a massive sculpin pattern couldn’t tempt the biggest fish in the river who is looking for his one meal that week. Either way, a sink-tip line is especially useful for getting your presentation down to where the fish will see it.

The Hunting
As I mentioned before, simply drifting downstream with vague hopes of surprising or pass-shooting some ducks isn’t likely to produce limits. Sure, many a time I’ve dropped my fly rod while simultaneously picking up my shotgun to swing through a passing flock—but this seems to happen much more often with goldeneyes than greenheads. And I’ve never yet whacked a pheasant from a boat, though I know people who have.

If your primary goal is to fish, it doesn’t hurt to have a 12-guage in reach just in case. But a truly mixed bag will require a bit more strategy.

Again, knowing the stretch well or closely examining maps can tip you off to blind corners where you can float along close to the bank and jump up ducks at close range. In low-profile, one-person watercraft you may be able to hunker down low enough to just float up to unassuming flocks of waterfowl before springing the trap. But those aren’t the only ways to load up on puddlers.

Decoying isn’t just for ponds and fields. If you’re able to scout or otherwise locate a spot where mallards roosted overnight, it wouldn’t be a bad idea to set up there in the morning for when they return from feeding in the fields. You just want to make sure to hide your boat very well or park it a good distance from your dekes.

Our family cast-and-blast tradition revolves around walking islands. It’s often highly productive for both upland birds and waterfowl. First you need to identify islands or riverside parcels that are public, then come up with a game plan. It helps to divide and conquer, for example dropping off two walkers at the head of the island then sending the rower down to the bottom of the island with the boat. The walkers will naturally push some birds out ahead, which will then bump into the blocker at the end. Islands will also often form side channels, sloughs, and eddies that can hold ducks, so it can be useful to hunt a little more cautiously and quietly than you might normally for upland birds.

Long story short: floating rivers after deer season winds down can provide endless opportunities for mixed bags and sporting creativity. Before you settle into the couch for the long winter, dig that boat out of your shed and take it down a river. Then you can put your duck breasts on the smoker right next to the trout fillets.

Paddling to Paradise: How to Pull Off an Overnight Float and Fishing Trip

“We was feeling pretty good after breakfast, and took my canoe and went over the river a fishing...

“We was feeling pretty good after breakfast, and took my canoe and went over the river a fishing...

‘Cast and Blast’ Your Way Out of the Rut

The calendar suggests that November wasn’t long ago. For many deer enthusiasts, the only thing more...

The calendar suggests that November wasn’t long ago. For many deer enthusiasts, the only thing more...

How to Train a Good Fishing Dog 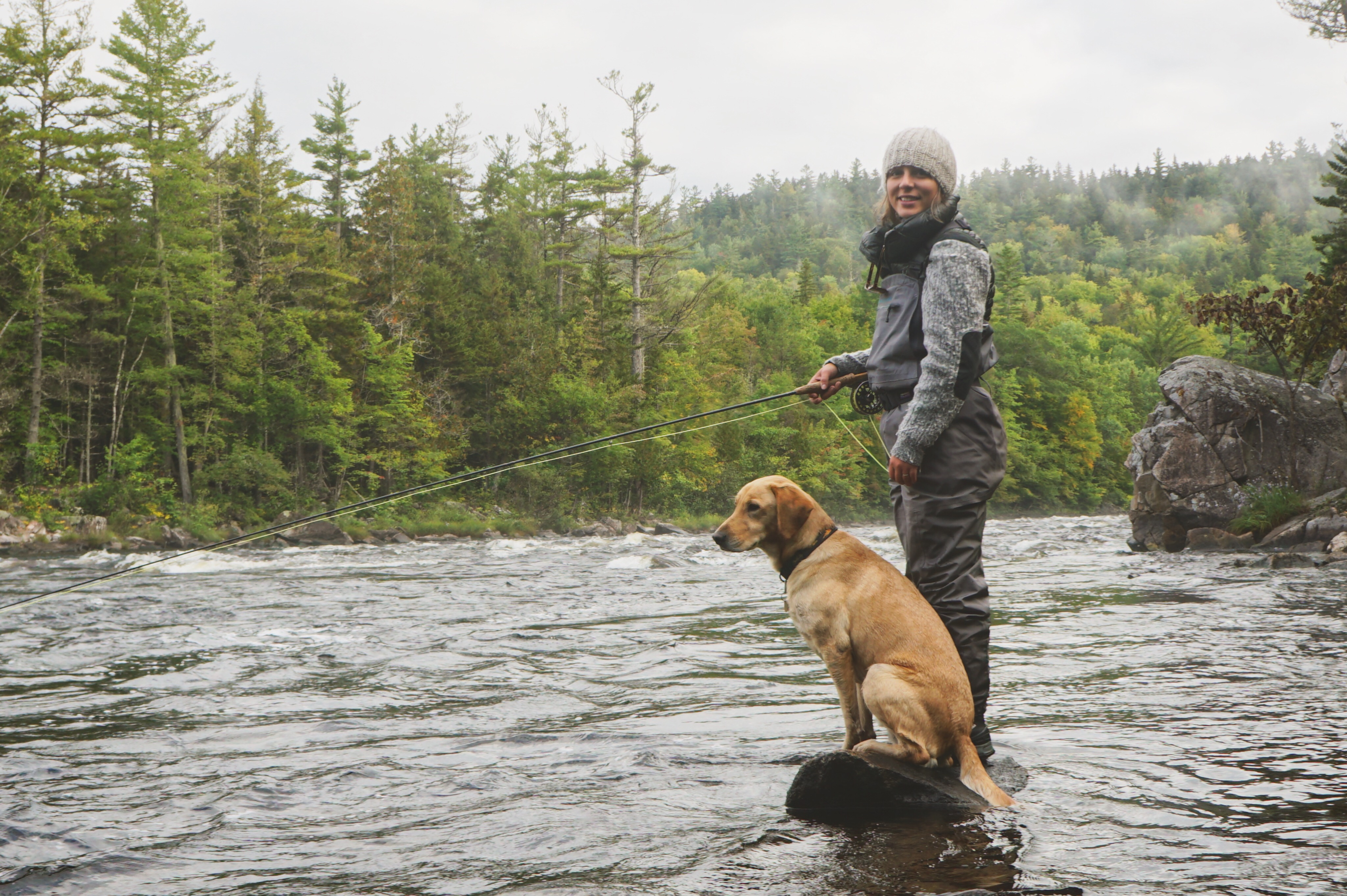