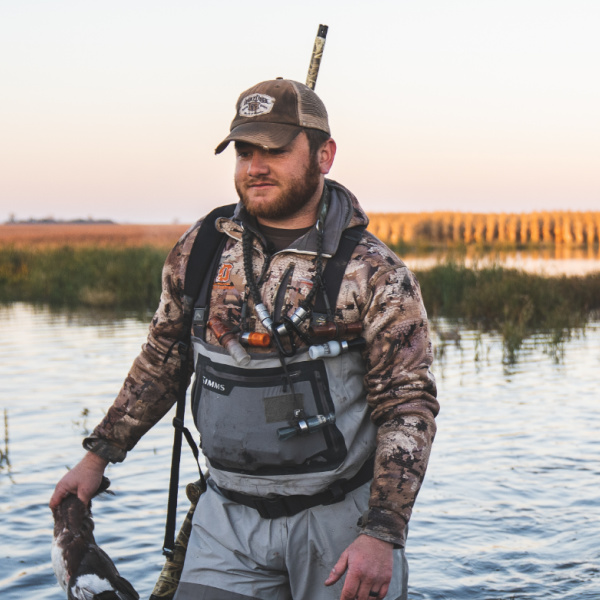 Duck hunters use a whole range of letters to describe decoy spreads. I can’t speak for all of them, but I doubt the grammarians of the 16th century had any clue their contributions to the alphabet would inspire the tactics of 21st-century waterfowlers. Regardless, the bird’s eye view of these select letters has been the demise of many ducks, and their effectiveness is without question. If you’re new to duck hunting or just looking for tried-and-true setups for small water, these are good places to start.

The U
The “U” is a duck hunting classic. It’s as basic and as easy as it seems, and it works more often than it doesn’t. You, the hunter, sit below the base of the U with the wind at your back. Depending on how far the hide is from the water’s edge, you should be anywhere from 10 to 20 yards from the bottom of the U, and 30 to 45 yards from the top of the U.

Now, it’s important to understand why these spreads work, and why the U gets the nod over the lowercase “n.” In the world of puddle ducks, decoys can act as a wall. As the ducks approach from downwind, they’ll often land among the most downwind group of decoys. So, if you close the end of the U, there’s a chance the birds will never get within range. On the contrary, leaving it open draws them farther up the spread, creating easier and cleaner shots.

The length, width, and density of the U changes based on wind. On really windy days, it’s important that the birds get as close as possible for good shooting. In this scenario, the “arms” of the U should be shortened and tapered in density, the base of the U should be thick and full of decoys, and the spread should thin out towards the top of the U. The outside edge of the U might only be 30 yards across

On a calmer day, widen the U and extend the arms. As the wind drops, ducks tend to be harder to decoy and they might shy away from landing tight to the upwind dekes. In my experience, a slightly longer shot on decoying birds is still a higher percentage shot than flared birds or decoy-shy birds that are just passing by. Give them a wider landing area and room to work the spread.

The J
The “J” acts on the same principles as the U; the decoys are a wall and you want the hook to be the ideal spot for birds to land. The situations in which you’d use this method are different though, because the J is better suited for a crosswind. Try to take the sun and wind into account when picking a blind and hunting spot. If the opportunity presents itself, hide in the shadows while still having a cross or quartering wind.

A good example of this would be a morning hunt with the ever-so-prevalent northwest winds we experience in the Midwest. If I set up with a northwest wind directly at my back I’ll be looking into the rising sun, undoubtedly giving the ducks the advantage. If I can set up for a crosswind facing northeast, I gain some shadows to hide in and I’m better able to see birds on the approach.

Depending on how wary the birds are, you’ll find two pretty regular outcomes with the J. When very interested birds hit the wall of decoys, they actually turn in towards the hook and present easy shots. When the more skeptical ducks hit that wall, they tend to land towards the very tip of the J and even beyond it, sliding out of effective gun range.

When those cagey birds land wide, I start changing the orientation of my J. I lay the J on its side, so the long part of the J is running parallel with the bank and the hook is the piece of the spread that extends furthest from the cover. The furthest decoy from our hiding place might only be 20 yards. There’s a chance the birds will dislike this layout even more and quit landing wide or working the spread all together. That’s a risk I’m willing to take because a bird landing too far for good shooting wasn’t my goal to begin with. When that roll of the dice pays off, it pays big and those once-cautious ducks end up on your dinner plate.

The Blob
The blob might not be the best name for it, but it’s reflective of the conditions when this spread works best: blah. The worst conditions in waterfowl hunting are swirling, switching, and non-existent winds with gray skies and light fog. The changing winds cause birds to land from all different angles, and the cloudy conditions leave no shadows to hide in.

My goal on days like these is to have a very loose spread almost without rhyme or reason, with decoys scattered from 15 to 60 yards away. Another tool you’ll want is a jerk string or some kind of splashing decoys. A lack of wind means a lack of decoy movement, and a little bit of splashing water goes a long way in providing some realism. Place the motion decoys where you want the birds to focus on; it’s important they’re close enough for shooting but far enough that they don’t call attention to your hide. My starting point would be 20 to 25 yards then adjust from there.

There’s a lot of factors with motion decoy placement and they change based on conditions, species, and habitat. That being said, a good rule of thumb is to put your motion 5 to 10 yards upwind of your ideal landing zone. Most of the time when ducks get close to the downwind spinner, they’ll flare out of the spread and start their landing approach over again.

The blob also allows you to be a bit more creative than the classic U or J. Although none of these spreads are reinventing the duck hunting wheel, they don’t need to. All three setups are deadly effective, especially on the sloughs, flooded fields, and ponds that ducks and duck hunters flock to each fall.

3 Drills Every Duck Dog Should Master

For waterfowl hunters it almost never fails: Your high hopes are dashed on the first hunt of the...

For waterfowl hunters it almost never fails: Your high hopes are dashed on the first hunt of the...

If you want to increase your decoy effectiveness this spring, consider what the real turkeys are...

If you want to increase your decoy effectiveness this spring, consider what the real turkeys are...