I slid across the lake’s surface like a skater on ice, the bow of my canoe slicing smoothly through the waves while diamonds sparkled on the water and shimmered off the antlers at my feet. This was something new. I’d seen flip-flops, fish, and beers in this context, but never antlers. I could get used to it.

My friend Parker told me this was the very best part of hunting whitetails by boat. It isn’t seeing a buck emerge from the timber, taking a shot, or first resting your hands on the fallen animal’s flank. No. The most satisfying moment of this kind of hunt was when you finally slide a deer into your canoe, push off, and float away without a sound–just you, the buck, and the water. 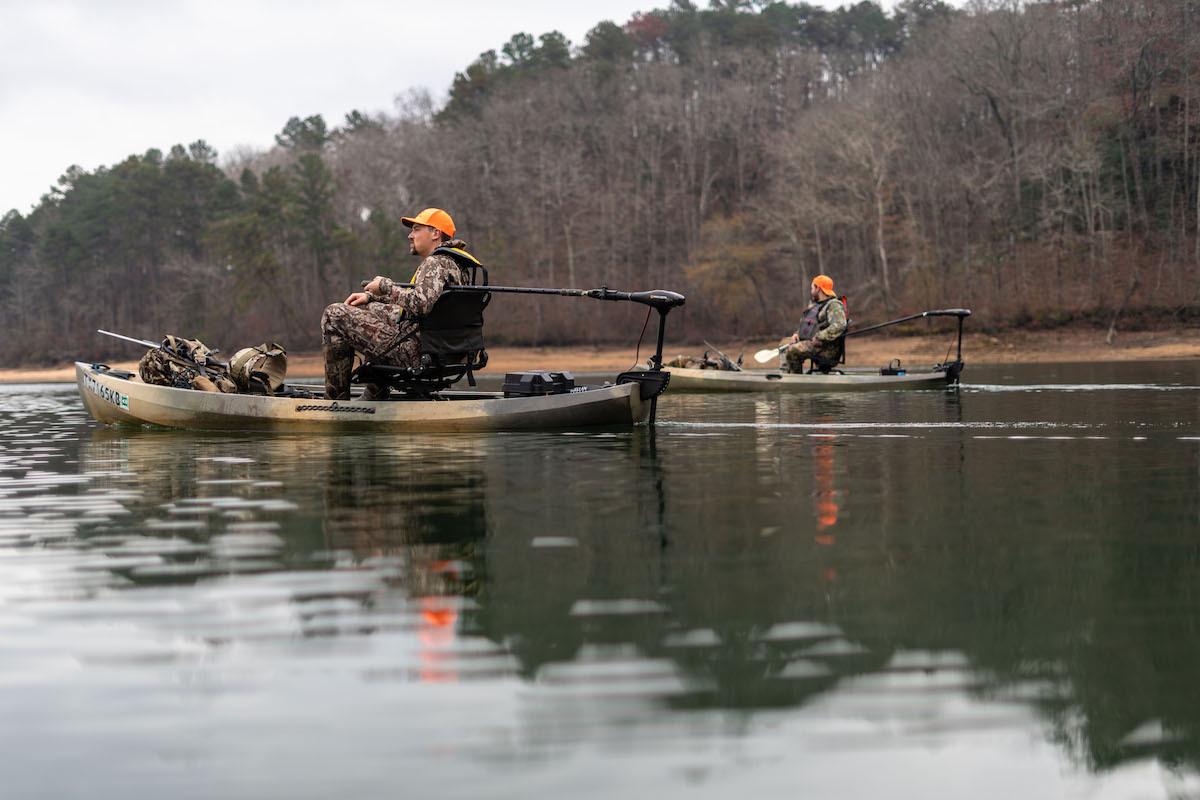 Why Hunt from Boats? I traveled to Alabama this past December to try my hand at boating for bucks, a practice that’s picking up steam with hardcore DIY whitetail hunters. Using a boat, you can access public lands or pressured private areas that other folks can’t comfortably reach. By crossing lakes, rivers, or swamps, a savvy hunter can infiltrate otherwise inaccessible public ground or just save themselves a lengthy hike into the area. The rewards for this extra work are less pressured deer, higher deer densities, and, sometimes, older bucks. In short, better hunting.

My mentor on this trip was Parker McDonald, a diehard whitetailer and host of the Southern Ground Hunting Podcast. Parker made a name for himself by successfully hunting public land deer by water across much of the South. We met at a nondescript boat ramp late one evening alongside a narrow channel of still water. The sun was setting, and the water’s surface was mirror flat, reflecting oranges and purples from above. We loaded our canoes with rifles, packs, life jackets, and lanterns. Then we set off.

Our destination was a long peninsula stabbing into the lake. This became home to our camp for the next five days. From here we’d climb out of tents and set off each morning and afternoon for far-ranging locations, all accessible by water, stretching for miles in either direction. Hunting water systems by boat provides easy avenues to vast stretches of hunting real estate. The possibilities nearly paralyzed me. 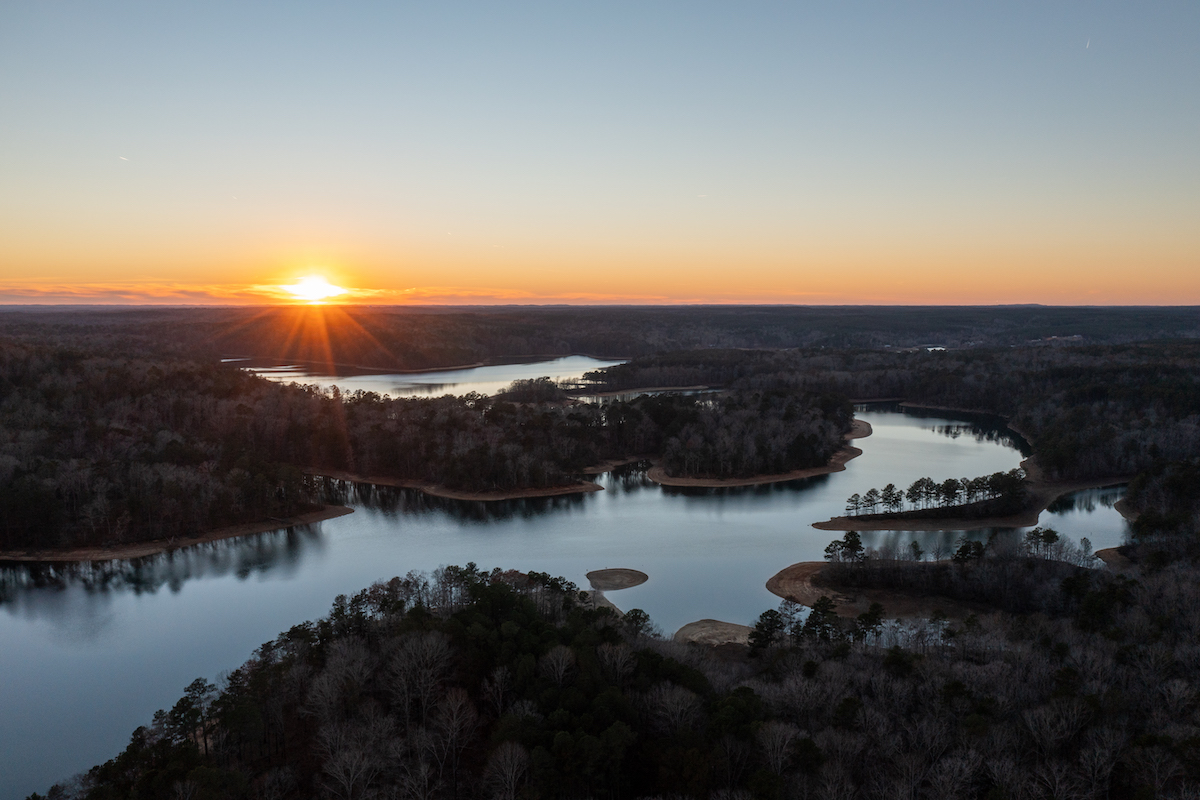 The Best Buck Boat The following day we rose early, sipped coffee while listening to the gentle lapping of waves on the shore, and set off again—this time to hunt.

On our way, drifting silently and slowly through the black fog, I recognized another advantage to this approach: stealth. We cautiously beached our boats on the shore, tied them off to rocks, and set off for a short hike to a destination just up the bluff. There was no long and loud hike through crop fields or acorn-filled timber that would send deer running. Instead, we slipped in the backdoor without a sound and were up a nearby tree before daylight.

Accessing a place like this is not possible with just any boat. A “buck boat” has to check many different boxes. It needs to access tight and shallow waters quietly while also having the stability and carrying capacity to handle hunting gear and a deer too.

Parker’s craft of choice for this job and the rig we used on this trip was a canoe-kayak hybrid. These are small, nearly metal free (ie. silent), and lightweight like a kayak, but with the added utility features of a boat.

Parker said a standard canoe or kayak will work too. These are easy to launch and transport in most situations while also riding high enough in the water to access just about any location—a shallow backwater slough, tiny Midwest creek, or high water in a Southern swamp.

The downside to these options is that they aren’t great for covering large distances. When solely dependent on a hybrid boat for water access in recent years, Parker found himself spending an exorbitant amount of time on the water to reach distant areas on large rivers and lakes.

“I would be getting up at 1:00 in the morning to be on the water by 3:00, to be to a spot before daylight. And that weighs on you,” he said. For this reason, Parker has added a small aluminum boat and outboard motor to his repertoire, which might be worth considering for other hunters with big water destinations in mind.

Ted Zangerle of The Hunting Public prefers a boat like this as well. “My favorite type of boat for deer hunting is a standard flat-bottom jon boat with an outboard,” he said. “I can get up and down quick with the motor, but can still snake my way into shallow backwaters and creeks.”

I spent my first morning of the hunt with Parker observing how he accessed his hidey-hole public land locations where he sets his ambush sites. The timbered hills rising from the shore creased into perfect terrain funnels for cruising bucks. Adjacent private land food plots gave ample incentive for does to frequent the area. 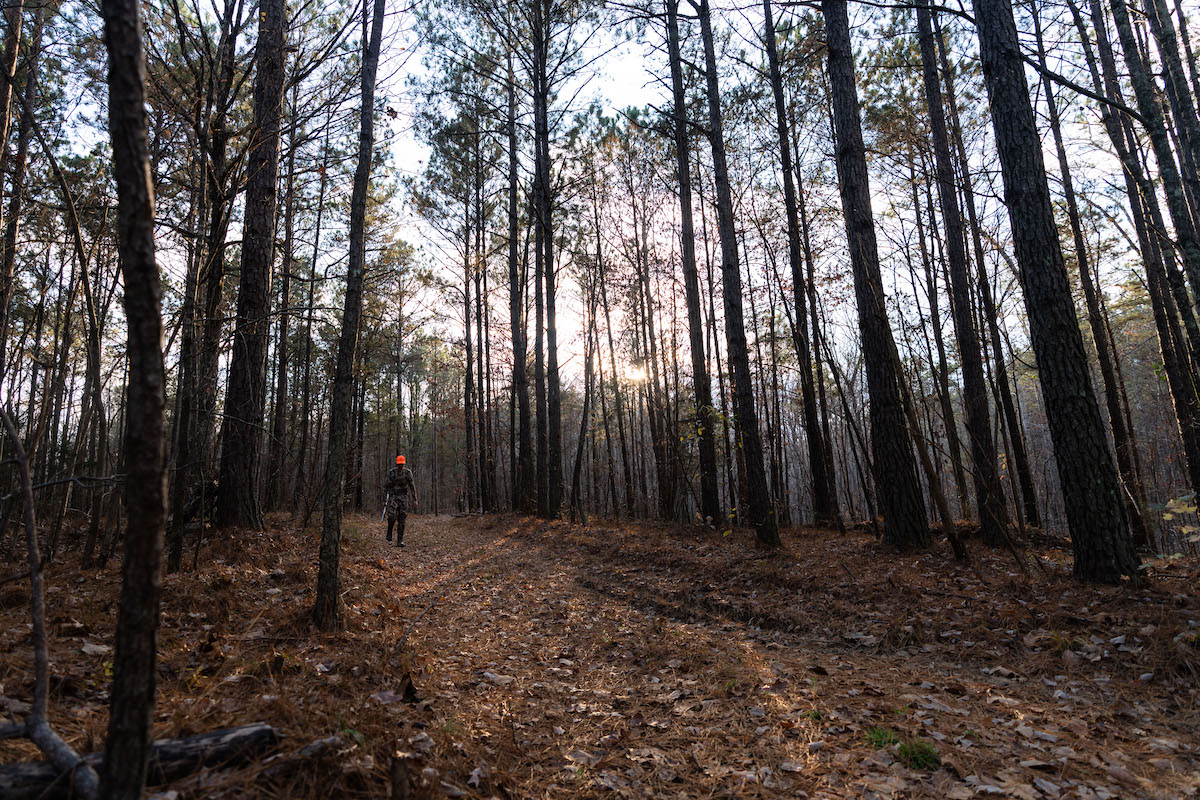 I set out later that afternoon on my own, seeking out similarly productive locations, motoring to the south that evening and exploring a northern branch the next day. The change of pace from previous weeks of hiking across Midwestern cornfields and slogging up Northeastern mountains was exhilarating. My traditional means of whitetail hunting, so anchored in one place, immobile, terrestrial, had become stifling. This was just the splash in the face I needed.

Yes, each morning and evening, I sat and stared and waited. But in between those times, I flew. It made all the difference.

It was on these subsequent days, while working against high winds and attempting to cover longer distances, that I realized for myself the value of a motor, something I’d long assumed was an unnecessary indulgence. Whether using a canoe or a flat-bottom jon boat, both Parker and Zangerle recommend an electric trolling motor. This gives you enough oomph to get through moderate wind but still allows for quiet access and shallow water maneuverability.

“When we have a spot in mind and we know there are likely deer within earshot when we’re pulling up with the boat, we can drop that trolling motor in and it makes for a dead silent approach,” Zangerle said.

While Parker prefers a minimalist approach to his boat, mounting almost nothing other than his motor, he reiterated to me during our trip the importance of having good lighting for the early morning and late night boat trips through the blinding fog that waterways frequently conjure. We both used high-powered headlamps on our hunts, while also running small lanterns on the back of our canoes as running lights. Zangerle takes this one step further with the use of a mounted LED light bar. “A bright light at the front of your vessel can help avoid a lot of logs and in the end will help save you some money in motor repairs,” he said. 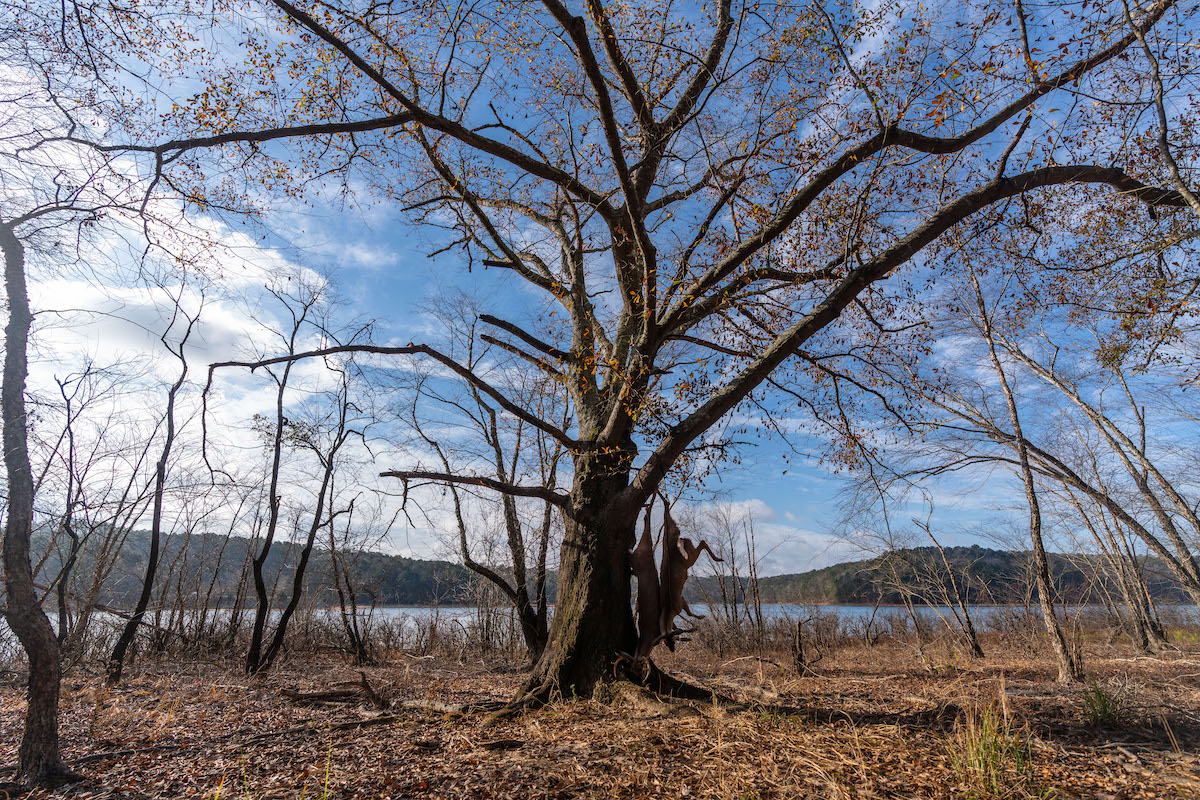 What Mattered Most? On my third day of exploring Alabama’s waterways, I finally found what I was looking for. I wound down the main channel of the lake for half a mile then turned off into a narrow slough that pinched and petered out after a few hundred yards. Steep wooded hills rose above me on either side, forming an almost amphitheater-like bowl of mixed hardwoods. I slipped up the interior draw and topped out, finding an oak flat growing tight against a series of old clear cuts. I settled in against a tree trunk.

Nine hours later my quarry appeared, easing his way off the oak flat, working scrapes and, finally, pausing just long enough for my crosshairs to settle.

Later, with that buck in my boat, I leaned back in my seat as I bobbed gently up and down and thought about just how right Parker was. It was a public land deer hunt that most can only dream of. Plenty of deer, almost no other hunters, lots of sign, and both Parker and I filled our tags on the same day.

But what stood out most weren’t the deer sightings or trigger pulls. It was the early morning fog lifting off the water, the breeze in my face as I cruised at midday, the waves singing me to sleep each night, and that last long heavy float out. Finding or building the perfect whitetail boat is a worthy pursuit for obvious practical reasons. To me, though, it’s less about what that boat can help you do and more about what it can take you through. As is the case with all of life, it begins and ends with water.

Here’s the truth about these “Best Cartridge” articles: the only honest answer is, “It depends.” Are these five cartridges really the five best whitetail cartridges in existence? It depends. It depends on where you’re hunting, your experience with firearms, what rifles you already own, how much money you can spend, how sensitive you are to recoil, and how much weight you’re willing to carry. The best cartridge for you might not be on this list...

Open country, high elevation, and long shots are staples of Western whitetail hunting. Your rifle cartridge better be able to handle it. In most scenarios, the .30-30 Winchester that shines in the thick foliage of the Appalachians won’t get the job done in the Great Plains or Rocky Mountains. You need something that can stretch its legs a little further. We polled the MeatEater crew about their favorite cartridges for pursuing whitetails west of...

The mechanical- versus fixed-blade broadhead debate is one that every bowhunter has an opinion on and one that will never be settled. The truth is that each type of broadhead, no matter what you read online, has its time and place. Rather than trusting your buddy’s opinion or buying whatever is popular on internet forums, here are several factors to consider. Everybody has a different bow setup, accuracy capabilities, and environmental factors in...