A Whitetail Terrain Feature that Works From Montana to Maine

Deer behavior, hunting culture, and tactics can all vary wildly by region. But one fact remains true from Montana to Maine and all whitetail country in between—creek and river bottoms are dynamite for deer hunting.

These winding water systems provide food and cover, funnel deer movement, and provide stellar hunter access. You might call that the whitetail trifecta. Learn how deer use these terrain features and that information as a hunter and you’ll have a skillset that can be applied anywhere whitetails call home.

Bedding and Food River and creek bottoms provide for a deer’s basic needs of food and cover. Concentrated water equals concentrated vegetation, and deer know it.

In some open regions where water is scarce, these bottoms might house the only moisture and lush vegetation for miles. I’ve seen this in states like Montana, North Dakota, Idaho, and Nebraska, and have found that deer will flock to these waterways to bed and feed on the abundant green growth. If hunting in an area like this, your job is simplified as almost all deer activity will emanate from these narrow corridors. In more fertile parts of the country, like Michigan, Iowa, and Ohio, deer are attracted to river bottoms for their increased density of vegetation and the unique topographic features caused by water.

“In most instances, deer have a pattern of bedding along the river during the day and then leaving that bedding to go to outside ag fields or the perimeter of the woods to feed in the evening,” said Lucas Cayko, a North Dakota bowhunter who specializes in river-bottom whitetails.

The very best cover in a river bottom is typically found on the deep inside bends of the s-curves that a snaking river creates. Deer often bed on these bulbous points of land, with the river on three sides providing a sense of safety. They prefer high-quality vegetation surrounding them, like autumn or Russian olive, willows, cedars, or similar shrubby cover. 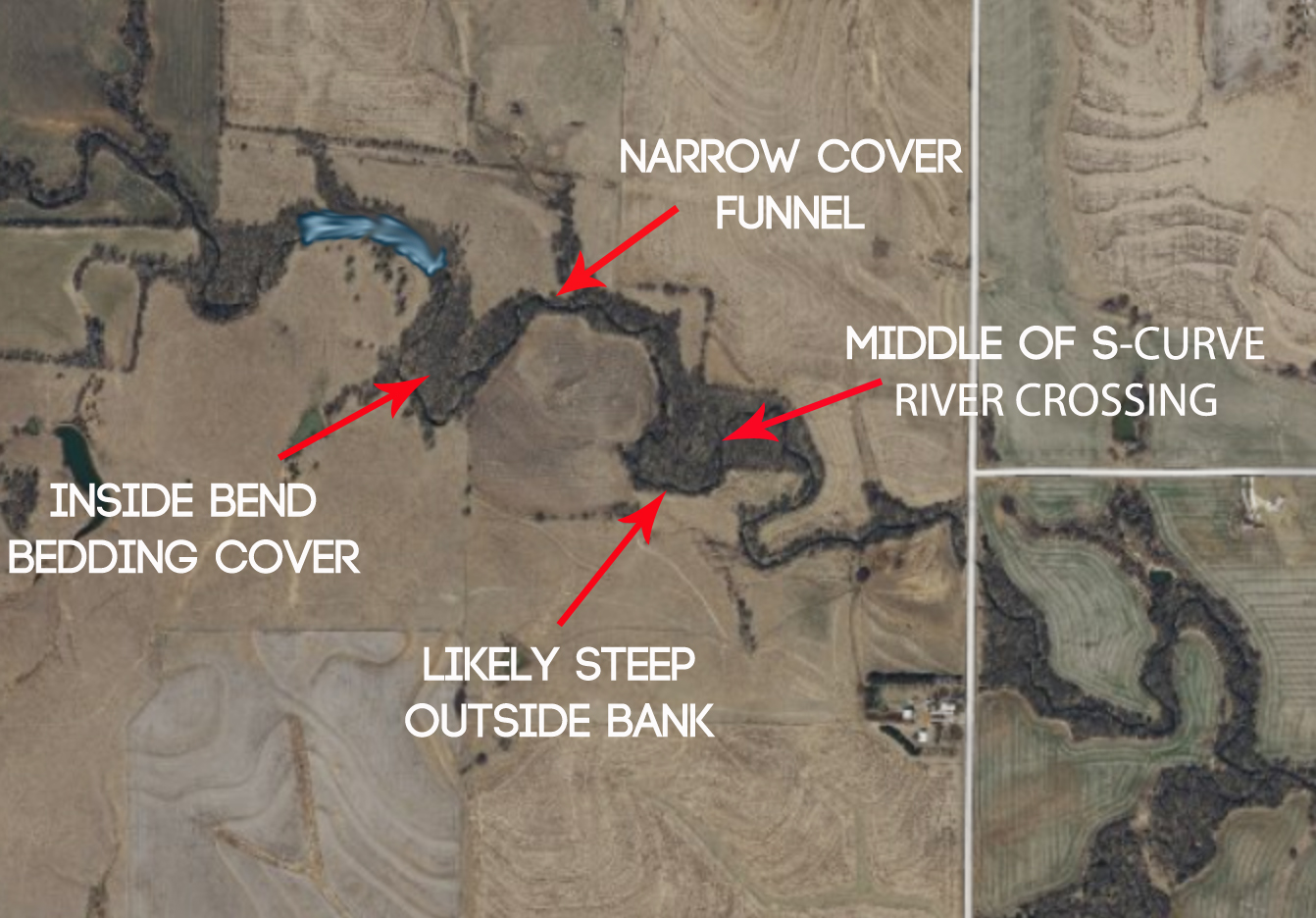 Intersections and Funnels River and creek bottoms also create several terrain funnels that deer use in predictable ways. Any time deer behave in a predictable fashion, it presents an opportunity for hunters. First on the list of useful terrain features are crossings.

“Deer don’t like to swim when they can walk across a stream or river, and they don’t like to climb up and down steep banks if a short detour will bring them to a gradual slope,” Bill Winke wrote in his book “Creeks and Ditches.” “This is why shallow water crossings are some of the best natural deer funnels.”

Rivers or creeks in most cases will have the highest banks where they sharply curve back and forth and the shallowest banks over long, straight sections. These stretches are where crossings are most common and can typically be identified on maps near the middle of an S-curve and then identified in person by walking the riverbank and looking for well used trails in the mud. “One thing I’ve learned about deer hunting is that tracks never lie,” Cayko said.

While Cayko typically hunts near rivers so large that deer avoid crossing them altogether, he has found that these water systems often create shallow drainages or ditches that are preferred crossing areas. Additionally, some large river bottoms have adjacent low-lying areas that fill with water at certain times and create pinch points between these backwaters and the channel. These narrow strips of land created by the river bends can funnel deer movement into range.

Even in river bottoms without significant curves and crossing areas, if a waterway is passing through open terrain, it will funnel deer movement by virtue of being the most secure cover around. Setting up on an open-country creek or river with a thin strip of vegetation along it during the rut is a fool-proof plan to catch cruising bucks.

Access The final piece to the river-bottom triumvirate is the unique hunter access these features can provide. “Rivers offer a ton of access capabilities that a lot of people don’t consider,” Cayko said. “River access is my bread and butter.”

Both Cayko and Winke, as well as the vast majority of avid deer hunters we’ve interviewed on the Wired To Hunt Podcast put a premium on the stealthy entry and exit routes that water systems allow. By wading or boating along a waterway, a hunter can access hard to reach locations without deer seeing, hearing, or smelling them.

Take for example how Cayko uses a boat and river bottom access for his favorite type of morning hunt setup. “The river offers the chance to sneak in the backdoor of a deer’s bedroom without them being aware of it,” Cayko said. “I mainly do this in the dark, at something like 3:00 or 4:00 a.m., with the goal being to catch a big buck sneaking back in to bed during the first light of the day.”

Conclusion Winke said that the definition of a great stand site is “one that funnels deer and is easy to access without educating deer.” You couldn’t describe a river or creek bottom better than that. Seek out, scout, study, and hunt these areas wherever you go. They won’t let you down.

Many of us don’t have the luxury of large nearby fields with standing grain to draw shedding bucks. We’ll never be able to go on a simple stroll through perfect shed hunting land and scoop antlers up left and right. It’s no secret that quality destination food sources are an ace in the hole for piling up sheds on hunting property. As long as there’s minimal pressure, bucks bed close to the food sources and keep movement to a minimum during this...

How to Scout Terrain Features for Whitetails

Pinch points, bottlenecks, and funnels are all the rage for rut hunters. Simply locate a terrain feature that forces deer movement, put in plenty of stand time in November, and get ready for your grip-and-grin photos. Of course, if it were that easy, bowhunters in most states would have a much higher success rate. They don’t because it isn’t easy. But that doesn’t mean training yourself to scout effectively for the right terrain features isn’t a...

How to Find Whitetail Sheds in Big Woods

I spend as much time (if not more) in the woods during the spring as I do during hunting season. Spring scouting can help you gather valuable intel for the next hunting season. My spring scouting regimen includes looking for whitetail sheds to figure out what bucks made it through the previous hunting season and harsh winter. Big woods areas are arguably the most challenging places to find sheds due to the miles of timber with not many areas that...