How to Forage Black Trumpet Mushrooms

Many people have this idyllic image of foraging in their mind's eye, where baskets of bounty are filled, way out in the middle of some primeval forest. I often see my students, full of dreams, deflate, when I break the news that most of my foraged food comes from plain jane places like the backyard, familiar field edges, and vacant lots. Hunting black trumpet mushrooms, however, is an exception to this norm, paling the wildest foraging fantasies to milk toast.

“Horn of Plenty,” “Trumpet of Death,” or “Trompette de la mort,” these sweet and savory little fungi, shaped like trumpets sounding up from the earth, bridge the fantastical gap between life above and below ground. The best part about them, though, is that their flavor, form, and habitat all rival fantasy, but they are very real, and so accessible.

Black trumpets are unique in that they overlap significantly on the venn diagram of “coveted,” “easy to find,” and “easy to identify” unlike their equally coveted fungal counterparts like truffles, porcini, or matsutake, who are much more elusive for beginners. While there are a number of species inside the genus Craterellus that fall under the layman’s umbrella of “black trumpet” the most common species in North America is Craterellus fallax, so that’s the one I’ll be referring to here. The other species within the genus differ only subtly in appearance, and sometimes in habitat, but luckily, they all taste equally divine sauteed in butter, with eggs, sauced over pasta, spooned into creamy spreads, or ground into salt that will make any ho-hum weeknight meal taste like a dream. 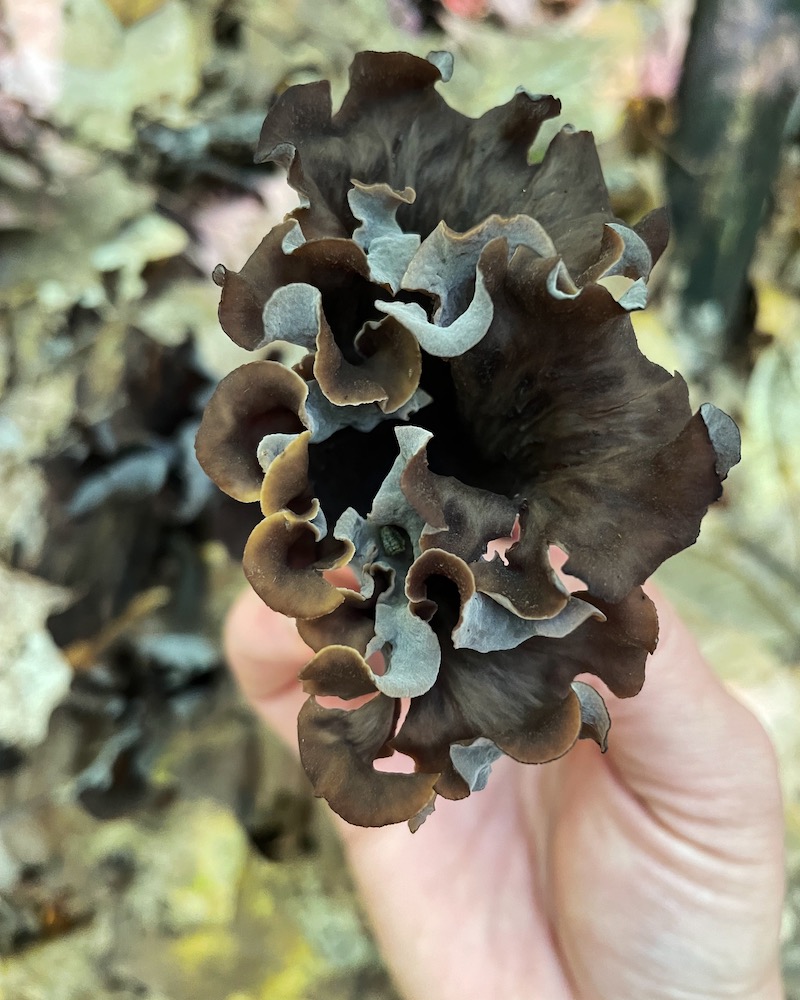 Where to Find Black Trumpets

Black trumpets emerge from the forest duff beginning around July and continue fruiting all the way to November. It seems like a long window, but they don’t just sit around and wait for you, they come and go quickly. Being in the right place at the right time is why foraging for mushrooms is called hunting—it’s much like pursuing an animal—timing, terrain, and conditions are everything.

Black trumpets, found east of the Rockies, are known to have a mycorrhizal relationship with oak trees. I can support this by anecdotally noting that in my 20 years of hunting them, I almost exclusively find trumpets in oak-beech woods. My most fruitful spots are oak-beech hillsides with lots of sphagnum moss hummocks that slope down to abut a damp, hemlock-birch bottom.

In those “honeyhole” scenarios, the majority of the trumpets are in and around the moss and at the bottom of the slope where the two forest types meet, and also in the washes or channels where water historically, periodically, runs down the hill. Washes are a great place to key in on if you’re foraging a new parcel for trumpets, especially at the spots where leaves and twigs build up to form a dam. I begin checking the oak-beech woods around the second week of July, and I continue checking, periodically, after rain events, through November. 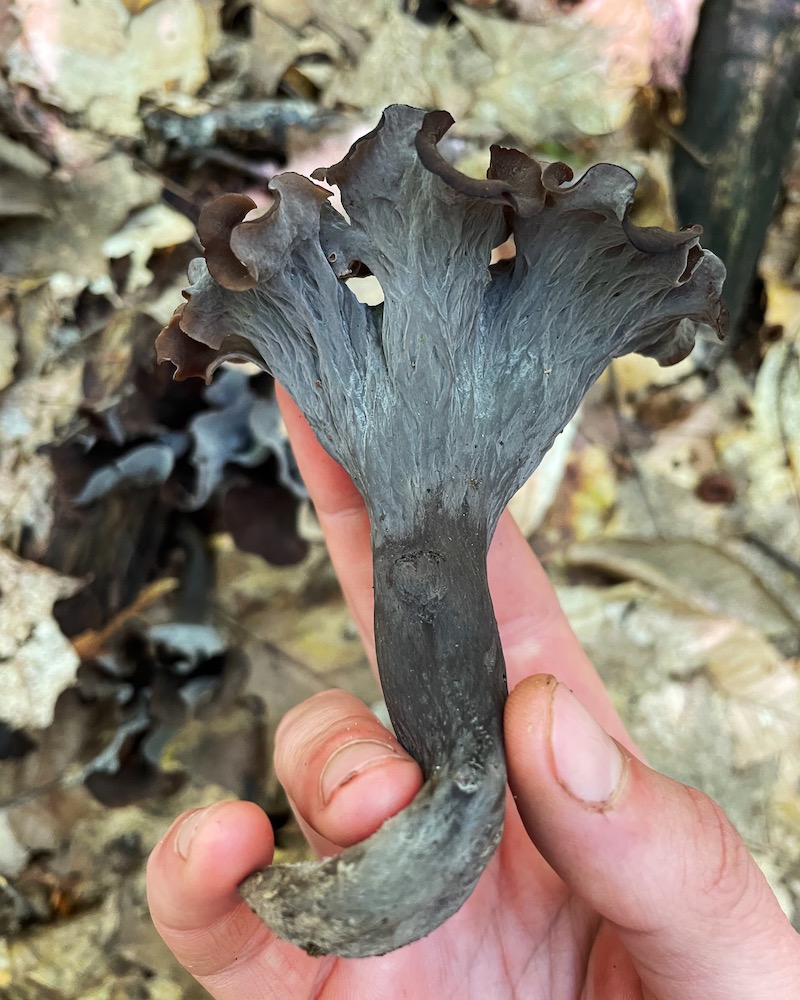 How to Find Black Trumpets

Black trumpet, horn of plenty, horn of death—these are all evocative but rather accurate names. The mushrooms span from black to gray to brown with a whitish or rust-colored bloom on their outer, spore-producing surface. They can be up to 6 inches tall and are always hollow, trumpet, vase, or funnel-shaped. They have thin flesh, a smooth-skinned interior, and no gills or pores on the outside. Though they’re often not completely smooth, having folds and veins, but never true gills. Often the outer lip of the trumpet will be ruffled or rolled.

When you step into the woods looking for black trumpets, move slowly, annoyingly slowly, until you spot your first one. They are one of those things that you can’t see until you see, and once you see one and have the scanning image in your mind, you see you’re standing in the middle of a carpet of them and you’ve already crushed a few on your way in.

Once you’ve got your trumpet eyes on, I find it helpful, if you’re on a slope, to work from bottom to top. This gives you the vantage point to silhouette or even skyline them, whereas the typical method for hunting them on flat ground is to keep your eyes straight down, looking for “black holes” which are the center of the hollow trumpet. They look remarkably like the curled and rolled-up leaf litter that they are pushing through. This can be rather straining to the eyeballs, so don’t forget to tag in your nose. I often smell a patch of trumpets before I see them, wreaking of musky, savory, overripe fruit, and then I can use the wind to guide me. 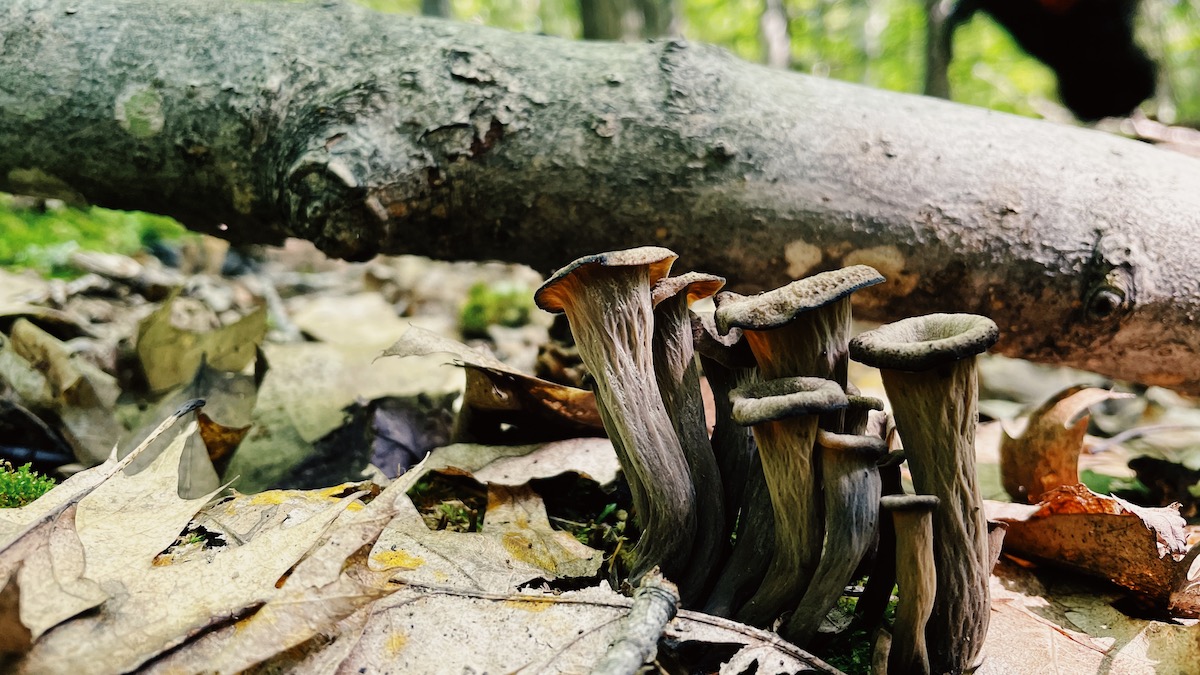 How to Collect Black Trumpets

After many years of spending many hours cleaning debris off of my delicate trumpets late into the night after bringing them home, I’ve come to be a firm believer in “picking clean,” where you leave as much dirt in the forest and out of your basket as possible.

I like to snip my trumpets above soil level with scissors or a very sharp, thin knife, give them a sharp blow of air from my mouth or a brush of the hand if there’s visible debris, and then put them into a basket (not a bag, as they’ll crush). If there is dirt stuck to them from a recent rain, I’ll sometimes dip them quickly in water at home and give them a swish before drying on a screen, racks, or towels.

If they’re picked at their peak and have no slimy or softening edges, they can last quite a few days in the fridge, but this is risky. Any soft spot can quickly taint the whole batch with a fowl smell. I like to use them quickly or get them on drying racks, pronto. They’re the easiest mushroom to dry because of their hollow form and thin flesh. All but the fattest and fleshiest of them can be dried whole, without slicing, and the meatiest ones only need to be peeled in half. I lay them in a single layer on drying racks made of hardware cloth and point a low fan at them (they’re so light that a fan on high will blow them away). I set the drying racks in my loft, which is warm and dry and out of direct sunlight, and they are crack dry in just a few days. Once they’re brittle, I store them in glass jars for rehydrating and using all year.

Turkeys are just about the most American of all poultry. They originated here and are celebrated by cultures ancient and modern. However, what was once a prized animal brimming with intelligence and flavor has now largely become a mere shadow of its original self. Thankfully, you have another choice beyond the butterball: Welcome to a world where heritage turkeys are making a comeback. Wild to Domestic All turkeys around the world are descended...

My appreciation for the intersection between food and nature arrived later in life. I wasn’t raised a hunter—my husband, an avid outdoorsman, brought me into this lifestyle. Initially I relished cooking and eating wild game because I loved the novelty of it; it was exciting to work with ingredients that couldn’t be bought from a store. But, once I actually started spending time in the field, that attitude quickly changed. I learned that there is...

I believe every meal has a story to tell if you’re willing to look for it. I’ve spent the past decade of my life trying to eat consciously, and I love exploring the qualities that make wild ingredients so profoundly unique. It’s not always easy, but it’s pushed me to search in places I’d never expect for the most unpredictable ingredients. As a result, I’ve learned that the best way to truly understand and experience everything food has to offer...