I hope your morel mushroom harvest is bountiful this year. So bountiful, in fact, that you consider giving away or selling the extras. Or, maybe you value the best tasting fungi so much that there’s no friend or dollar amount good enough to take away your morels. If that’s the case, you’ll need to figure out a way to preserve your haul before it goes bad.

You can achieve this with a dehydrator or oven. Just run a dehydrator at 125 degrees or an oven as low as possible with the door cracked for 4-8 hours. But there’s a third option if you don’t own a dehydrator or don’t want to spend a Saturday babying your oven: air drying.

Air drying is the oldest form of food preservation, dating back at least to 12,000 B.C.E. Even with modern dehydrators, ovens, smokers, freezers, and curing agents, this ancient preservation process is still the preferred method for many mushroom hunters.

Ryan Callaghan, who’s picked enough burn area morels to make any commercial forager jealous, started air drying mushrooms when his daily harvests began weighing in the dozens of pounds. He employs a screen door and box fan to get the job done.

“A screen door is the perfect solution for drying morels,” Callaghan said. “Everyone already owns one, and it’s a tool that has more than one purpose.”

To start, Callaghan brushes excess dirt off the morels but doesn’t do any real cleaning or cutting. He then pops his screen door off the tracks and props it up on 2x4s inside his garage. To speed up the drying process, he cracks his overhead garage door and places an oscillating fan between the morels and the source of fresh air.

He overloads the screen door to start, with the mushrooms damn near on top of each other. After the first 24 hours, the morels start to shrink and naturally space themselves out. After 2-3 days, they should be fully dehydrated and “hard like little rocks.”

“You need them to have no moisture at all,” Callaghan said. “It’s achievable every time, no matter how wet the morels are or how humid the air is.”

If he doesn’t pick enough to justify using the screen door, he’ll put them in mesh onion bags and hang them on his patio. The timeline is similar, yielding dried morels after about 48 hours. 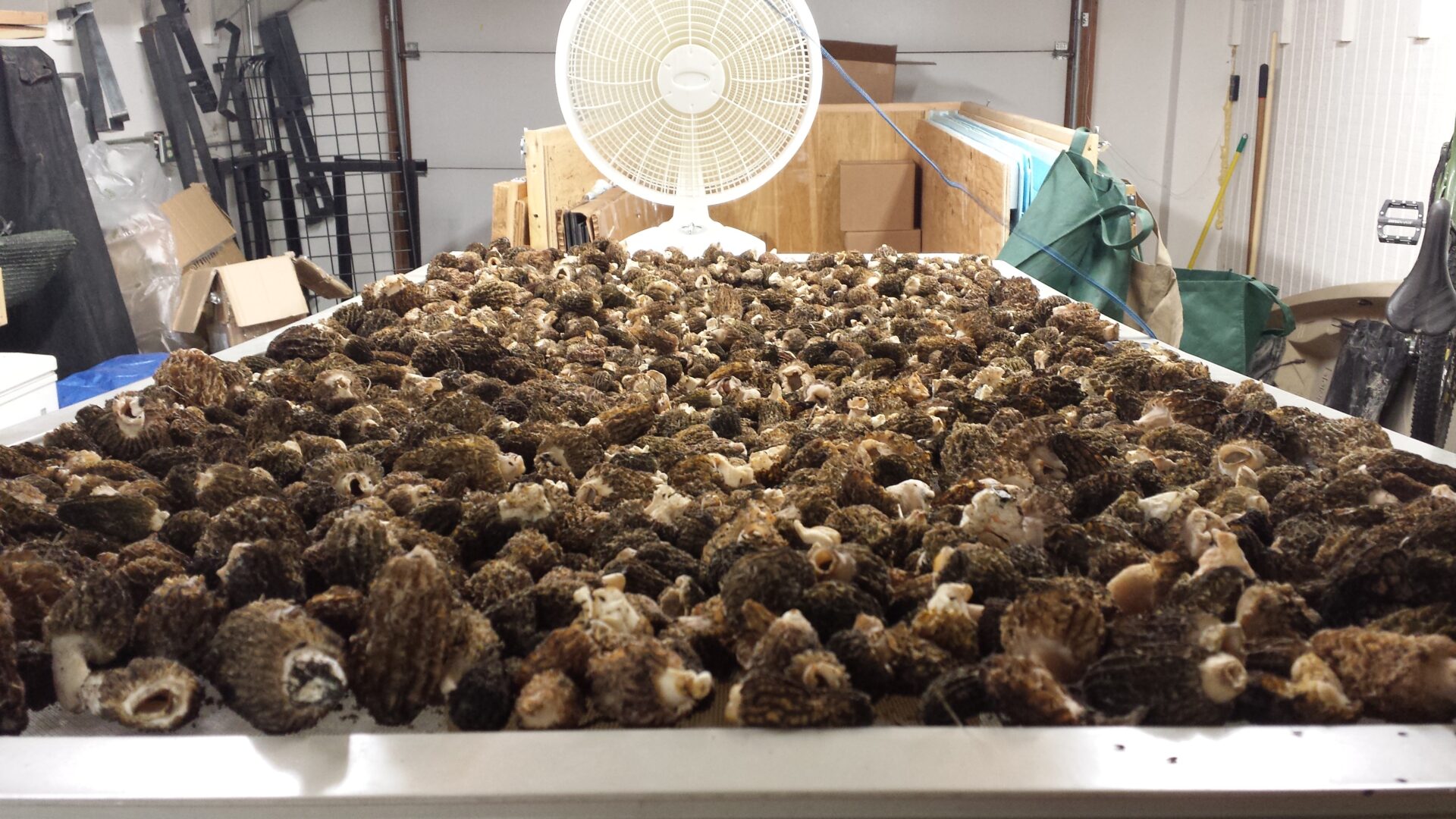 Jenna Rozelle, who educates people about foraging through her Wild Food blog and volunteer work at Backcountry Hunters & Anglers, uses a similar approach as Callaghan. But instead of using a screen door, she’s built stackable drying racks made of square pine frames with mesh hardware cloth stapled over the top.

“My drying method for wild mushrooms and herbs is partly based on circumstance—living with a limited amount of solar power that’s not even enough to run a freezer,” Rozelle said. “It’s a no-nonsense, tried-and-true process.”

Rozelle cuts her morels in half and spaces them on the mesh so they don’t touch. She stacks the racks on the edge of her loft where there’s guaranteed warmth and air flow. She checks them daily and flips them as needed until they become “crack-dry,” which takes about a week.

She’s attempted to speed up the process by placing mushrooms in direct sunlight but doesn’t recommend it. According to Rozelle, morels will sweat and reabsorb the moisture, which creates for unpredictable drying.

“I’ve just found I get a more gentle, even drying for most things out of direct sunlight,” Rozelle said. “Unless I want a hot, fast dry for something fleshy like a tomato, I keep everything away from windows and out of the elements.”

Both Callaghan and Rozelle store their bounty in glass jars and sealable bags. Although the FDA might recommend otherwise, Callaghan has eaten dried morels from his pantry two years after they were picked.

When it comes time to cook them, you need to add some moisture back into the mushrooms. Although Callaghan just soaks his morels in a bowl of water for four hours, Rozelle takes a more thorough rehydrating approach.

“I put the dried mushrooms in a bowl and cover them in water just off the boil,” Rozelle said. “I place a plate over the bowl to trap the steam and let them sit for 30 minutes. I drain over another bowl to reserve the liquid for cooking and set the mushrooms on a towel to briefly dry.”

Callaghan and Rozelle admit that reconstituted morels aren’t quite as good as the fresh product, but not much else is. For a fragile mushroom that doesn’t do well in freezers and can’t be bought at the grocery store, this is as good as it gets.

“Mushrooms just lose a little something going through that process,” Callaghan said. “But dehydrated morels are absolutely still a treat. Eating diluted morels in December is better than eating no morels at all.”

Save this product
Benchmade
Essential Meatcrafter™️ Knife
$180.00
A hybrid hunting fixed blade with a fine, smooth edge to trim, debone, or slice your preferred cuts of meat. Makes just as much sense in the back of your truck as it does in the kitchen drawer.
Save this product
Meater
Meater+ Bluetooth Thermometer
$99.99
With up to 165 ft Wireless Range, MEATER is the first truly wireless smart meat thermometer.
Save this product
Spiceology
7 Pack Seasonings Gift Pack
$59.99
Bring home the entire Mega Spice Collection and change the way you cook.
Save this product
Penguin Random House
The MeatEater Fish and Game Cookbook
$35.00
The definitive guide to cooking wild game, including fish and fowl, featuring more than 100 new recipes.
Get the latest in your inbox
Subscribe to our newsletters to receive regular emails with hand-picked content, gear recommendations, and special deals.
Our picks for the week's best content and gear
For the whitetail obsessed, with Mark Kenyon
Redefining our connection to food, with Danielle Prewett
Your one-stop for everything waterfowl, with Sean Weaver
Get out on the water with the MeatEater Fishing crew
Technical hunting apparel
Purpose-built accessories for hunting and fishing
Quality elk, turkey, waterfowl, and deer calls
Privacy Policy

Morel mushroom hunters disagree on plenty, like pinching stems, ideal soil temps, and the “pop.” But the differences aren’t limited to foraging. Likely the biggest debate in foraging culture centers on how to clean morel mushrooms. Mushroom enthusiasts often fall into one of three camps: quick rinse, short soak, and long soak. To better understand where most foragers stand, I conducted a poll in a morel mushroom hunting group on Facebook. After...

I’ve had strangers offer up onX pins for where to find roosted turkeys and spawning walleye, but rarely do foragers volunteer morel mushroom spots. Like a good family recipe or secret bait, a lot of morel honey holes go to the grave with whomever found them. Since no one is going to walk you into a big patch of the finest tasting mushies, you’ll need to find spots on your own. While the absolute best place to pick morels this spring is the same...

Spring might be the tastiest time of year for sportsmen. Spawning walleye hanging out in shallow water offer firm, white fillets. Turkeys susceptible to sweet-talking hunters provide plump cuts of white and dark flesh. Wild asparagus hiding in rural ditches reward foragers with distinctly-flavored greens. But perhaps the most valued delicacy this time of year is the morel mushroom. This golden fungus shows up each spring and drives wild food...