But perhaps the most valued delicacy this time of year is the morel mushroom. This golden fungus shows up each spring and drives wild food enthusiasts to hike miles in search of the strange-looking and exquisite-tasting treats.

Here’s the when, where and how for finding morels. While this guide includes a bunch of useful info, articles like this can’t possibly tell the whole story. Morels are mysterious organisms that humans don’t understand completely. Our inability to farm them says a lot about the enigmatic nature of morels, and shows why the best way to learn about the fungus is to get out in the field and look for it.

When to Find Morel Mushrooms
Morels can be found from March to September, depending on location. For the majority of country, the peak mushroom hunting months are April and May. In a Southern state like Mississippi, morels can be found as early as March. At higher elevations, like those found in Montana, morels might not start showing up until June.

The key to knowing when morels will grow is monitoring soil temperature. They will start to emerge when the soil hits 50 degrees, and disappear around the 60 degree mark. The window where they’re present in a given area can be as short as a few days or as long as a month.

Ideal morel-growing weather includes a bout of rain followed by consistent, mild temperatures. Daytime highs in the 70s and nighttime lows in the 50s will produce a lot of mushrooms. A few days of unseasonably hot or cold weather while morels are present will stunt their growth and make the mushrooms more brittle. If you have solid mushroom weather and see a 20-degree or 90-degree day in the forecast, it’s best to think of that as the mushroom foraging deadline and get out in the woods before it occurs.

If the weather and precipitation seems unpredictable and you’re not sure when morels will start popping, there is some old timer wisdom you can lean on. A great indicator that morels are growing is the presence of dandelions. It’s been said many times that when you see the first yellow weeds of spring, morels won’t be far behind. Where I grew up in South Dakota, it seemed like there would be a 10-day lag between dandelions showing up and the first morels popping.

In other parts of the country, experienced mushroom hunters pay attention to trees. Some say that the best morel hunting happens when budding oak leaves reach the “size of mouse ears.” 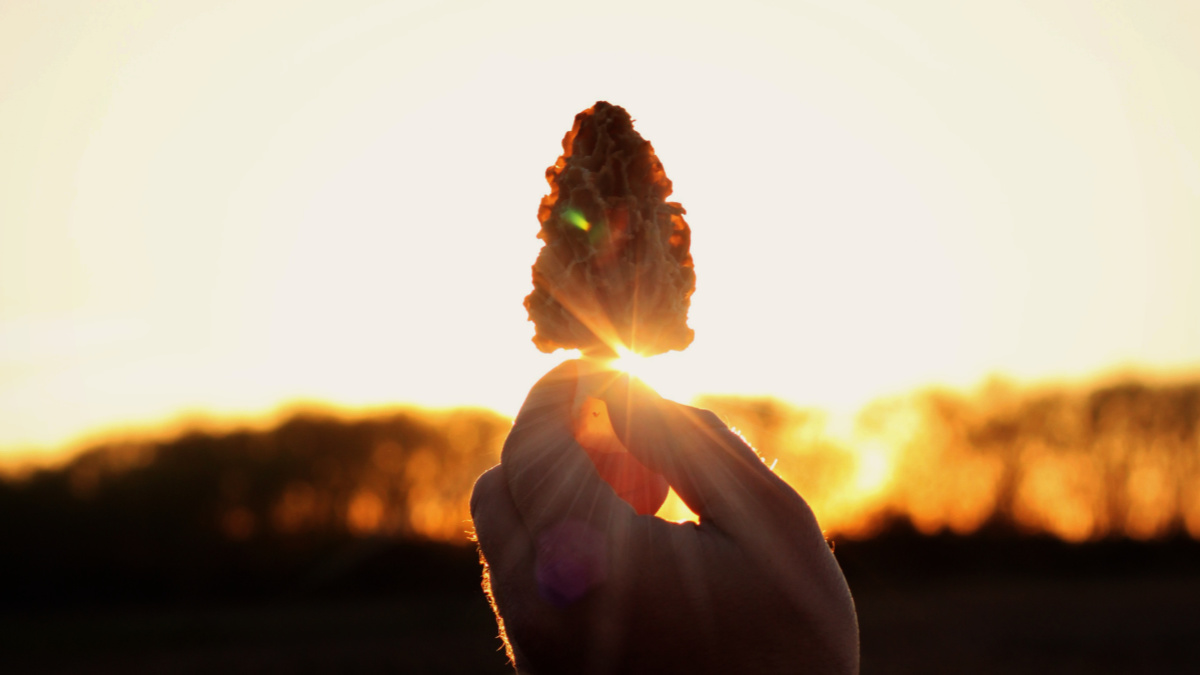 Where to Find Morel Mushrooms
I’ve had strangers give up their best turkey spots and walleye holes in the spring, but turn mute when the topic changes to morel mushrooms. Hardcore gatherers will take their favorite mushroom areas to the grave, which means you’ll most likely have to find spots on your own. That’s OK—the challenge of striking out into the woods and finding something you didn’t know was there is one of the things that makes mushroom hunting so much fun.

The most common places to find morels are in river bottoms, sparse forests and burn areas. Morels need quality soil, moist soil and ample sunshine, so keep those three things in mind when exploring a new spot. The first places they will show up will be south-facing slopes, areas with fewer trees and spots that have sandy soil. As mushroom season progresses, they’ll make appearances in more shaded areas with less permeable soils.

It’s a good idea to brush up on your tree identification before hitting the woods. Elm and ash trees seem to be in the most mushroomy country, as well as sycamores, poplars and cottonwoods. Though the specifics vary between regions, take note of which trees are in the vicinity when you find a good patch of morels.

Morel mushrooms thrive in disturbed areas, though the reasons why are not well understood. Places that get irregular flooding or burns will produce some of the best morel picking in the country. Usually numbers will peak in the spring following a flood or fire, and each year after will get a little worse.

Typically, the best morel spots are also great for other mushrooms. If you stumble on a patch of inky caps, shaggy manes, oysters, pheasant backs or turkey tails, it’s likely there are morels in the area. Most springtime mushrooms favor similar conditions.

My absolute favorite spot to find morels is near downed timber. Almost every time I’m in mushroom country and find a tree that’s been tipped over, I’ll find morels. There’s something about the soil disruption, dead bark lying on the ground and little bit of shade the tree trunk provides that makes patches of morels appear. I consider fallen trees my slump busters during a tough day of mushroom hunting.

How to Find Morel Mushrooms
The best thing you can do to find morels is to put on the miles. Just like with shed hunting, though, you should be concerned with efficiency. Consider the 80/20 rule, which means 80 percent of the morels will be found on 20 percent of the ground you have access to. If you know what this 20 percent looks like, that’s where you should focus the majority of your time.

When you do stumble on a morel, stop where you are. Morels are spread by microscopic spores, so when you find one, you should be able to find more in the same area. It’s not uncommon to walk a mile and find zero mushrooms, but then pick 5 pounds in an area the size of a parking spot. You’ll also want to take note of what vegetation is around, what the soil is like and how much sunlight the spot gets. The more you can observe, the more you’ll know what good mushroom country looks like.

If you’re mushroom hunting on public lands, the most pressure will occur on weekends. My favorite day of the week to mushroom hunt on public ground is Thursday. This gives the area enough time to grow more mushrooms that weren’t up the previous weekend, but still beat the rush of people that will be out there on Saturday.

Private land gives mushroom hunters a huge advantage. Having private access lets you hunt when convenient, and allows foragers to “let them grow” if the weather looks favorable. In the past, I’ve found small morels one day, had mild temps with a little bit of precipitation in the forecast, and returned a few days later to mushrooms that were three times the size. I don’t recommend doing this if on public lands, but rather suggest immediately picking everything you find.

When picking mushrooms, make sure you don’t harvest the entire morel. Pinch off the base at ground level with your fingers or a scissors. By leaving the volva in the soil, you give the mushroom a better chance of growing again the following spring.

How to Sell Morel Mushrooms
One of the reasons morel hunters are so competitive is because of the fungi’s value. Prices vary by year and region, but it’s not unreasonable to expect $15 to $30 per pound. In years when the weather doesn’t cooperate, the shortage of mushrooms makes prices go up. The contrary is true in years where the weather is perfect and everyone has a surplus of morels.

Even within a single year, however, prices can fluctuate . People are willing to pay more early and late in the spring when fewer mushrooms are available. There is also a “quality” factor, as morels that come from sandy soil fetch much, much lower prices. Some buyers won’t pay any amount of money for sand-filled morels.

The most common buyers are restaurants, grocers and commercial dealers, but they usually have the lowest payouts as well. The mushroom hunters I know that get the highest prices operate out of farmer’s markets in urban areas. Some sellers will drive a state away just to get a few dollars per pound more. If you aren’t satisfied with restaurant prices and can’t set aside a Saturday for downtown, consider advertising your harvest online. Facebook and Craigslist are easy, free ways to offload morels for straight-to-consumer value.

It’s important to know local regulations before selling mushrooms, though. Some states don’t allow you to sell mushrooms that are picked on public lands, while others require permits to sell items that were foraged.

How to Cook Morel Mushrooms
If you decide to keep your harvest, as I often do, you’ll be in for a treat. Morel mushrooms have an unmatched earthy flavor that can’t be touched by anything else. They’re very versatile in the kitchen, too.

The most common way to cook morels is to sauté them in a hot pan with butter, garlic, salt and pepper. They can also be battered and deep-fat fried whole, or cut in half and go straight on a hot grill. You can use them in pasta or on a steak, or serve them as the main course or as an appetizer.

Before cooking, you’ll need to get your mushrooms clean. This is one of the most argued topics when it comes to morels, and I don’t think there is a right answer. In my opinion, the less cleaning the better.

If your morels came from soil that wasn’t sandy or muddy, just a quick rinse under water will do. But if your morels have sand, dirt or a bunch of bugs, you may need to soak them in salt water for a few hours. Next, gently dry them out on paper towels, and refrigerate them on a plate or in a paper bag. Don’t put them in an air-tight container, which will ruin their texture.

Eat your morels as quickly as possible. I’ve stored them in the fridge for up to a week, but the best quality for morels comes within 24 hours of harvest. Freezing is an option, although I don’t care for it.

To freeze morels, you’ll first need to dry them in a dehydrator or oven. For a dehydrator, set the temp to 110 degrees and go for 8-10 hours. For an oven, go with the lowest possible temperature and keep the oven cracked for 8-10 hours. You can then freeze them in jars for up to a year. When you’re ready to cook, rehydrate the mushrooms in a bowl of water for 20 minutes.

They won’t taste as good as fresh, springtime morels, but not much else does.

Foraging ,
Get the latest in your inbox
Our picks for the week’s best hunting, fishing, wild foods, and conservation content.
Big bucks, land management, rut reports, and tips and tricks for the whitetail obsessed.
Privacy Policy

The Complete Guide to Ramps: How to Find and Eat the Wild Leek

10 of the Biggest Morel Mushrooms Ever Found

When I go mushroom hunting, I’m satisfied if I find enough just to fill a sauté pan. Usually...

When I go mushroom hunting, I’m satisfied if I find enough just to fill a sauté pan. Usually...

Why, When, and How to Use Wild Game Marinades

The use of marinades on wild game is a contentious topic. Some say they don’t actually tenderize...

The use of marinades on wild game is a contentious topic. Some say they don’t actually tenderize...