A team of long-range shooting experts in Wyoming set what appears to be the new world record for the longest rifle shot ever completed: 7,774 yards or 4.4 miles.

Scott Austin and Shepard Humphries led the team from Nomad Rifleman, a shooting range and instruction center based in Jackson Hole, Wyoming. The custom bolt-action rifle was chambered in .416 Barrett, and the hand-lathed 422-grain bullet took 24.5 seconds to reach the target.

Humphries described feeling “elated and relieved” when he heard through the radios that the bullet had hit the target. “We all contributed so much time, effort, and money into this project, and as with anything that has not been done before, the chances are slim that you will succeed,” he told MeatEater.

The team took 69 shots the day they set the record, and their final shot miraculously hit the eight-inch center circle. The white rectangular target measured 10 feet wide and seven feet, eight inches tall–or about 1.7 MOA. Hitting the center circle was equivalent to putting a bullet on an area the size of a pinhead at 100 yards, Humphries explained.

Wind was their biggest enemy on the day of the shoot, Humphries said. They shot in the morning when it was relatively calm, but every time the wind velocity changed even a single mile-per-hour, the team had to adjust their point of aim to 26 feet.

To complicate matters even further, they had no way of judging the wind at every point along the bullet’s flight path. At a microscopic level, wind, pressure, and humidity can change from one cubic foot to the next and at every moment within the same cubic foot. “Even if we could know with 100% accuracy the ‘environmentals’ at the moment the trigger was pressed, we could not predict what that cubic foot would be 20-something seconds later as the bullet passed through,” Humphries explained. “There were over 23,000 of those cubic feet.”

Making an accurate wind call was virtually impossible, and spotting the bullet impact also presented a challenge. By the time the bullet reached the target, it had slowed down to 689 feet-per-second and didn’t produce a consistent dust signature.

So, Austin and Humphries developed what they call “audio spotting.” They constructed bulletproof bunkers at various points around the target, and team members sat in them listening and watching for the impact of the bullet. They communicated with one another to triangulate the hit and relayed that information to the team at the gun.

Using this system, they walked the shooter (whose name is being kept private at his request) into the target. The final wind and elevation call was 1,092 MOA up and 17 MOA left. 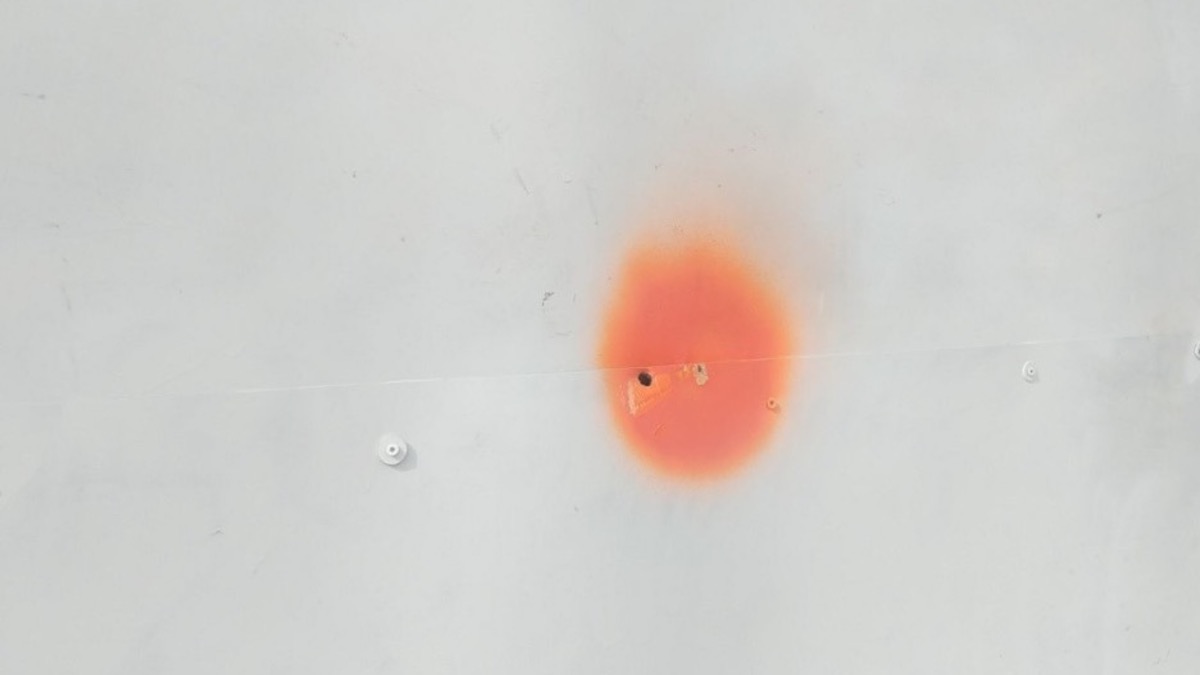 Years in the Making

The team had to shoot for about five hours that day, but years of preparation went into their success. They started planning in late 2020 and hoped to attempt to break the record in the summer of 2021. But the complexity of the project and the difficulty of procuring custom parts from international suppliers pushed back that deadline, and the rifle wasn’t completed until May of 2022.

The rifle was built by Scott Null and his sons Meshac and Nehemia at S&S Sporting in Driggs, Idaho. It features a 40-inch LRI barrel with a 1:9 twist, a Cadex Dual Strike chassis, a McMillian TAC50 action, and a Timney trigger.

To see beyond four miles, they used a Vortex Razor 6-36×56 FFP scope with an EBR-7D MOA reticle. The shooter could see the white rectangular target at that distance, but Humphries said the orange center circle fluttered in and out of visibility.

The most difficult part of the build was developing a rifle/scope combo with enough elevation adjustment, Humphries said. Most scopes have less than 100 MOA of elevation, but the team knew they needed over 1,000. The custom base gave them another 350 MOA, and they used a Charlie TARAC periscope for an additional 700 MOA. With the barrel angled so far upwards, they also needed to use a Delta TARAC just to see around the barrel.

In total, the project took over 1,500 man-hours and 20 months from conception to completion. 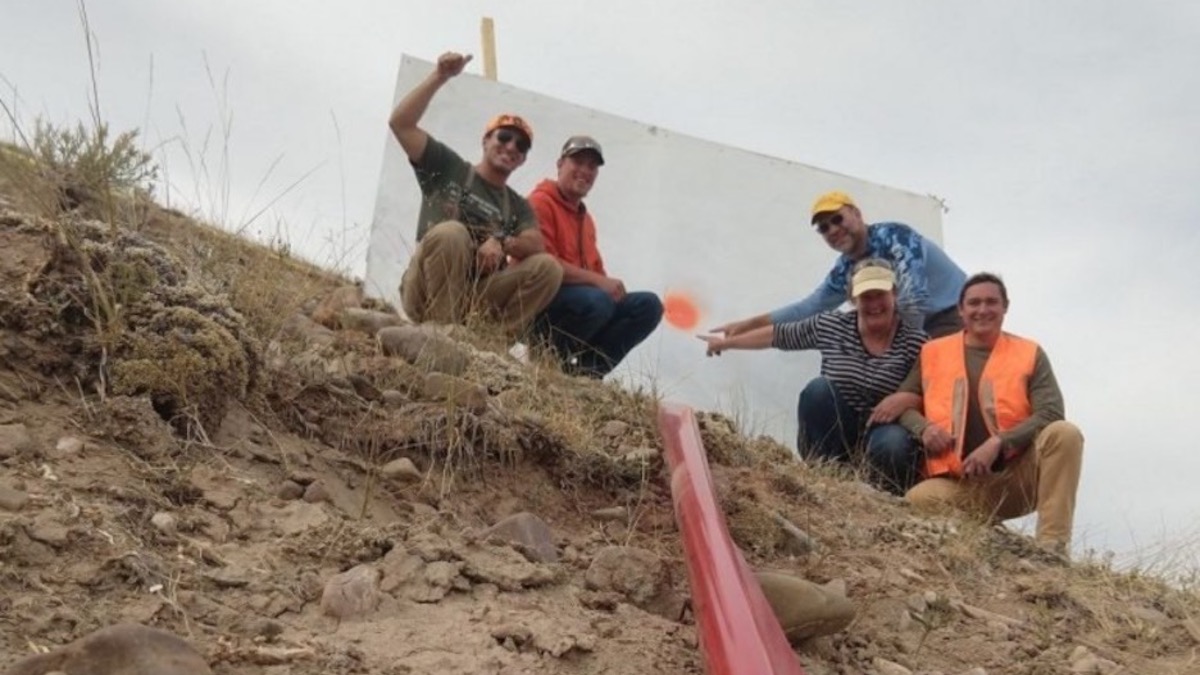 With so many moving parts and unpredictable variables, it’s easy to see why it took 69 shots to hit the target. The team could have landed another few shots in the seconds after the first shot hit, but they admit they wouldn’t be able to repeat their success on another day (or even 10 minutes later) without taking dozens of additional shots.

This type of extreme long-distance shot, in other words, could not be applied to hunting, tactical, or competition purposes.

“These types of shots are just for fun,” Humphries explained. “This is not for hunting purposes, and the hit isn’t consistently repeatable yet. Maybe the people who beat our record and the other smart cookies in the ERL [Extreme Long Range] world will be able to make first-round hits at these distances in the years to come, but at this point, it isn’t a sure thing.”

In a FAQ video posted after their announcement, Humphries likened the shot to a world-record basketball shot rather than a military sniper shot.

“We’re not claiming… that we can walk out any day, any wind, any condition and hit an eight-inch circle at 4.4 miles,” he said. “We’re saying we went out, just having fun, and tried to hit a target a long way away.”

The only way that you’ll ever reach a high level of proficiency with your firearm is through trigger time. An intimate understanding of your weapon’s capabilities and limitations will teach how to place the bullets where you want them, The more time you spend with your gun, shooting from multiple positions at the range and hunting, the more you’ll understand it. There are no shortcuts. While training to shoot, make sure to familiarize yourself...

Video: Is Shooting Off a Backpack or Bipod More Accurate?

After recently missing a shot on a black bear hunt with Clay Newcomb, I wanted to determine if shooting off a bipod or a pack is more accurate. I had my rifle dialed in for the hunt but didn’t have the time to set my bipod up, so I took the shot off my pack and missed low. To test the difference between the two shooting rests, I shot prone toward two separate targets at 300 yards and then compared the points of impact. The minimal difference...

Video: How to Sight in a Rifle

Getting a new gun zeroed in or on target is not as complicated as some folks might believe. But it is easy to get a few crucial steps wrong. The proper equipment will make the process easier and more reliable. First, there’s your rifle and your scope. You can mount the scope yourself and use a laser bore-sighter to get the reticle near where it needs to be. At the range though, you’ll need a box or two of the same ammunition, a fresh target, a...