What’s the World’s Most Difficult Sportfish?

Muskie are the fish of ten thousand casts—or is that steelhead? Nothing really runs and jumps and straight-up brawls like a tarpon. Marlin are undoubtedly the marquee, among the largest and fastest, rare, unbelievably powerful, enigmatic. I’m sure we have ol’ Ernie Hemingway to thank for that perception, but it really just takes a lot of time and a mountain of money to catch “the lady in the blue dress.” Same goes for bluefin tuna.

Yet there is one fish that infuriates and magnetizes anglers unlike any other. Retirement accounts drain toward lodges and guides. The devoted mostly travel alone, unwilling to share shots with anyone else. Almost anyone who interacts with it will require a second meeting, whether to chase the dragon or exact vengeance. It will make women roar and strong men weep.

That fish is the peerless permit. The blue devil. The phantom of the flats. The pickiest, poutiest, spookiest, most difficult fish there is.

Or maybe it’s the common carp. Depends on who you ask.

Since I’m the one writing this here article—and was recently humbled by permit—I’ll go first. Cermele and Nolte can speak their piece at the end. 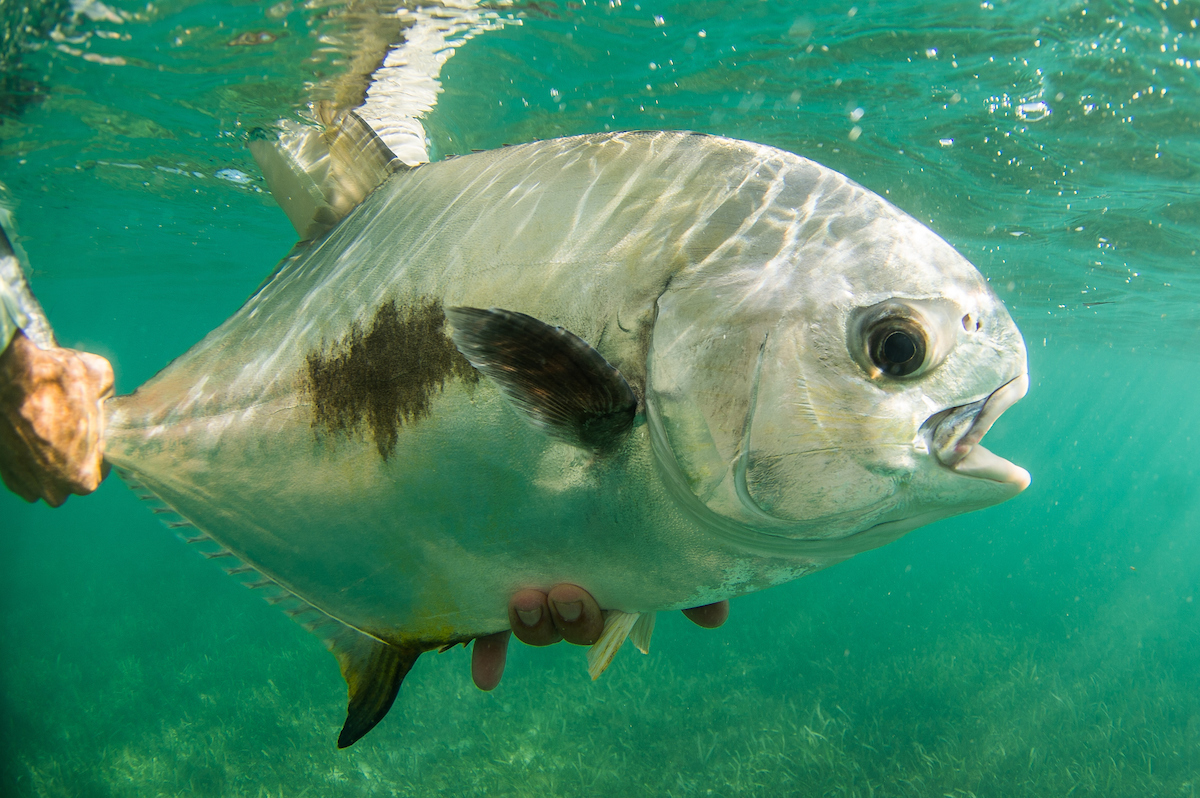 The exclamation “¡palometa acá!” is forever seared into my psyche. Three years ago, toward the end of our third day looking for them, a pack of permit finally showed themselves over the Yucatán’s white sand shallows. Urgency and import saturated the Mexican guide’s voice.

These fish didn’t seem to travel; they would just appear in one place then another. When I could see them, they changed directions constantly. I’d glimpse one tracking left and wind up to make a shot. Three times in a row my fly landed where I told it to land, but the permit wasn’t going that way anymore. At last, I thought they’d gotten too nervous and departed, then one appeared right behind my fly a rod length away from the panga. Then they really busted.

The next day, my buddy Paul and I rented a car in Tulum and drove out to a spot where we could access the flats around the Boca Paila bridge. Waist-deep for nine straight hours, we poked around mangrove islands and creek mouths and landed four small permit. Something had changed from the day before and the fish were on the feed. While this feat likely impressed no one, I personally was astonished by dominance a three-pound fish could exert over a 9-weight.

Now when I say “most difficult fish,” it might be best to rule out these babies. I’m also not talking about wreck permit suspended in 40 feet over structure, willing to fight each other for a live crab. No disrespect—that looks fun as hell and I’d love to do it someday. But that’s not what drives addicts around the world. It’s seeing large, robust permit—or thinking you can kinda see them maybe?—flashing over flats. Sometimes it’s easier to see their shadows than their prismatic flanks, which reflect their surroundings so vividly as to appear transparent.

You’ll hear that the permit in certain areas only eat mantis shrimp. In other spots within the same small, Central American nation, folks will say they only eat crabs. And not any crab, only one specific crab fly pattern in one of two colors. But not on days when there are clouds or bad vibes in the air.

On my permit adventure this March, six experienced anglers did not land a single one in five full days at the Blue Horizon Lodge in Southern Belize. Two of the fishermen were retirees who spend much of their time and savings on travelling the world alone to fish for permit. My buddy Travis hooked a really nice one on the first day, but it broke his hook with its muscular crab chompers nearly at the boat. By no means was the score due to a lack of fish; I personally probably saw more than 100, many of them with their grim reaper sickle tail flying above the surface as they hunted crabs among the coral bars.

I’ll pacify myself by remembering the roaring wind, frequent rain, and pinballing barometer—undoubtedly unhelpful factors—but I’ll be haunted by the sneaking sense that somehow I could have done better. Fewer false casts, softer landings, allowing the fly to sink toward the grabby coral another few millisecond longer before stripping. I made easily two dozen shots that seemed right on the money, but the fish simply ignored or refused the offering. The only one that did grab spit the hook so fast that I barely pricked its nose on the strip-set. At least I know that I left everything on the field.

If you want to see for yourself, our friends at Waterworks-Lamson are currently giving away a permit trip to the Blue Horizon Lodge on Northeast Caye, Belize, along with a set of their new saltwater series fly rods and reels. MeatEater is also giving away a big, badass set of 13 Fishing rods and reels that were used filming our latest show, B-Side Fishing. Enter to win here.

I walked away convinced by the cliché that Trachinotus falcatus is the world’s most difficult sportfish. But some folks will tell you that in reality, the toughest is actually the common carp.

“Believe it or not, I think one of the most challenging species to catch is a wild carp on the fly,” said Joe Cermele, senior fishing editor and host of B-Side Fishing. “By wild I mean one living in an area where it's eating natural forage like nymphs and crayfish. I'm talking about unmolested carp way up some river, not the ones in the park pond that rise to white bread and French fries. To catch a truly wild, wary carp feeding in skinny water with hair and feathers, you damn well better know exactly what that fish is feeding on. You better not step on a twig or splash too loudly as you wade. I've spent an hour waiting for a shot only to blow my cover with a wrong move, or finally get the shot, have the fly snubbed and not get another one all day.”

You’re not wrong, Walter. Wild, shallow water carp on the fly can be super tough—and really exciting. I don’t want to diminish that great sport, and everyone should try it. Flats permit and certain American carp populations provide surprisingly similar pursuits, and I’ve heard that many of the best permit fishermen get that way by practicing on “suburban salmon” when they can’t be in the Caribbean. I’ve caught a lot of carp, but I have to say my interest was renewed after my recent Belizean adventure. What’s different is the stakes—you are going to see another carp, and you can always just come back to that spot after work tomorrow. Not so much with permit.

I think Joe would have to agree with me. “I don't really have too much permit experience, though I did spend a day chasing them on the famed flats around Key West years ago,” he said. “I was really pumped, but we had horrible conditions. It was windy and there was cloud cover, which made for poor visibility. We saw very few fish, and the first two spooked before I ever got to make a presentation with the fly rod. So, in what I believed to be a sensible, logical move, instead of wasting subsequent shots, I put the fly rod away and opted into a live crab on a spinning rod. We saw two more permit over the next three hours, both of which spooked as soon as my crab landed.”

Miles Nolte, director of fishing and co-host of the Bent Podcast, also has a small amount of permit experience but doesn’t buy the hype. He’s another sucker for suckers.

“Permit are often regarded as the pinnacle sport fish, the untouchable obsession, the white whale—especially for fly anglers,” Miles said. “Not me. Permit are cool, but they’re not the fish that haunt me. I’m haunted by the lifeless doll’s eyes of bigmouth buffalo.”

Of course there’s no right answer to the question, “what’s the most difficult sportfish?” What would fishing culture be without wild hyperbole and grandiose bullshit? There may be times this summer that I’m willing to tell you that walleye are the trickiest damn fish there is. We all just need to remember that the challenge is what makes fishing fun and keeps us coming back for more.

The giant container ship “Ever Given” was stuck sideways in the Suez Canal for nearly a week, providing endless fodder for news outlets and meme creators. But the piscatorially-minded among us had only one question on our collective minds during this debacle: If we were stuck on a 1,300-foot-long boat run aground in the desert, could we at least catch fish while we wait? Turns out the answer is “yes,” but that’s actually a problem of its own. The...

In 1968, four days before he was gunned down on his hotel room balcony in Memphis, Tennessee, Dr. Martin Luther King Jr. lounged in the bow of a skiff, savoring the solitude of the remote mangrove labyrinth surrounding Bimini Island.  A little-known footnote to his short but monumental life, Dr. King traveled to the tiny Bahamian atoll several times to get away from the noise and controversy of the United States in that era. He came to write...

If It Ain’t Chartreuse, Is It Any Use?

The sea at false dawn was a mess. It had been blowing for a week, with strong Easterlies stacking up roller after 6-foot roller to pound the beach. Rain fell long and hard and rivers brought down tree limbs and coffee-colored water. Huge clumps of bladderwort and saltcord grass floated on the surface, enough to foul every other cast. Calm southwest winds followed the storm and called me to splash my skiff. Rob was on board, but truth be told, he...