Troy Lancaster of Port Aransas, Texas, and his friends left Fisherman’s Wharf aboard the 64-foot sportfisher “Quantified” at noon on Monday, April 12, and ran 70 miles offshore to deep-drop for swordfish. Finding none, Capt. Justin Drummond motored through the night out to an oil rig 150 miles off the coast. Arriving before dawn, they immediately began trolling for live bait. Once the tuna tubes were full, they switched to the big guns.

Right away one of their live skipjack tuna got hit, but the attacker didn’t stick on the 19/0 circle hook.

“And then we had another one probably 15 minutes later that we know was a 400- to 500-pound blue marlin, but we broke him off,” Lancaster, 50, told MeatEater. “I mean he came out completely picture-perfect, 10 feet in the air.”

After one more missed strike suspected to be marlin, at 9:20 a.m. a rod came tight on something very large.

“She nearly spooled us. Not completely but got us down to the backing three different times,” Lancaster said. “She had complete control the first three or four hours. It was anything she wanted to do, she did.”

Bets were placed on the species. Some thought blue marlin, but that was ruled out due to the fact that it wasn’t on the surface and jumping. They considered yellowfin, but eventually realized that yellowfin just don’t get that big.

“We had a suspicion as to what we had on, of course it never showed itself. It never came up.”

“With a blue marlin, a lot of times you get an opportunity to gain a lot on them because when they come up to the surface to run, you can back the boat down on them and chase them,” Lancaster said. “But when the fish is straight up and down, you can't back the boat or do anything. You're completely helpless. And all you can do is try to pull back against them and gain some line.”

The anglers correctly assumed that the fish had wrapped the line with its tail, got stuck backward, and died. Tuna are what’s called “ram ventilators,” which means that water has to be flowing through their mouth and over their gills to breathe. They can’t fan their gills like many other fishes and will die if they stop moving.

“The unfortunate thing is, an almost 900-pound fish isn't buoyant,” Lancaster said. “So, we spent two hours just pulling real slow to kind of help lift the fish up in the water column, and then backed down really hard to pull out that scope. That's the only way we were able to gain any line.”

Finally, at 6:30 p.m., a full 9 hours later, a behemoth bluefin tuna emerged from the depths. 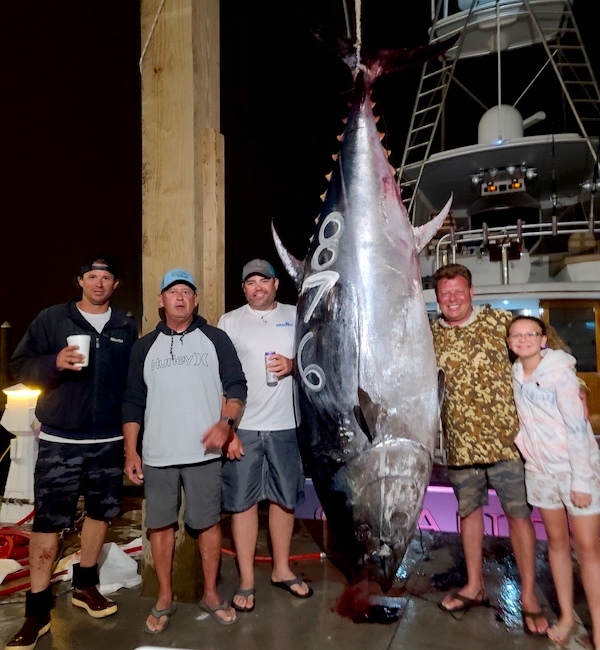 “So, it wasn't a big dramatic battle at the transom, except for the fact that we had seven guys on the boat—one of them that wasn't worth a shit, and that was me—to try and get the fish into the boat. We wound up spending almost an hour and a half trying to get the fish in the boat. But we finally got it in and had a huge celebration, great times for everybody.”

They measured the bluefin at 121 inches long with an 84-inch girth—10 feet long by 7 feet around. They’d planned to stay through the night and for another day but decided instead they should go get the potential-record fish promptly weighed, processed, and frozen. Back at Fisherman’s Wharf, an official recorded the weight at 876 pounds, besting the old Texas state record from 1985 by 68 pounds. Anglers landed an 840-pound bluefin last year that was not accepted as a record.

Biologists from Texas A&M’s Harte Research Institute for Gulf of Mexico Studies met the crew to gather organ and meat samples and other data from the fish.

“They said the fish was female and that she had already spawned out, which we were very happy to hear,” Lancaster said. “[They said] if we caught her three months ago in the Atlantic, she would have weighed almost 1,200 pounds. There’s quite a bit of weight loss once they get into the Gulf and do their spawning and also cut back on their food.”

Lancaster said that even if the fish hadn’t died on the line, they probably would have kept it anyway. NOAA Fisheries allows a 2,500-pound total recreational quota for bluefin tuna in the Gulf of Mexico. Anglers may not deliberately target bluefin but are allowed to harvest one greater than 73 inches per vessel per year while the short season is open. This population of bluefin depart their Gulf spawning grounds in the spring and migrate up the East Coast to waters off Nova Scotia.

Atlantic bluefin have been the poster child of overfishing for decades. Their massive size and dramatic population decline, combined with the astronomical price that prime bluefin can fetch at auction, make them an obvious focal point in discussions about overfishing. 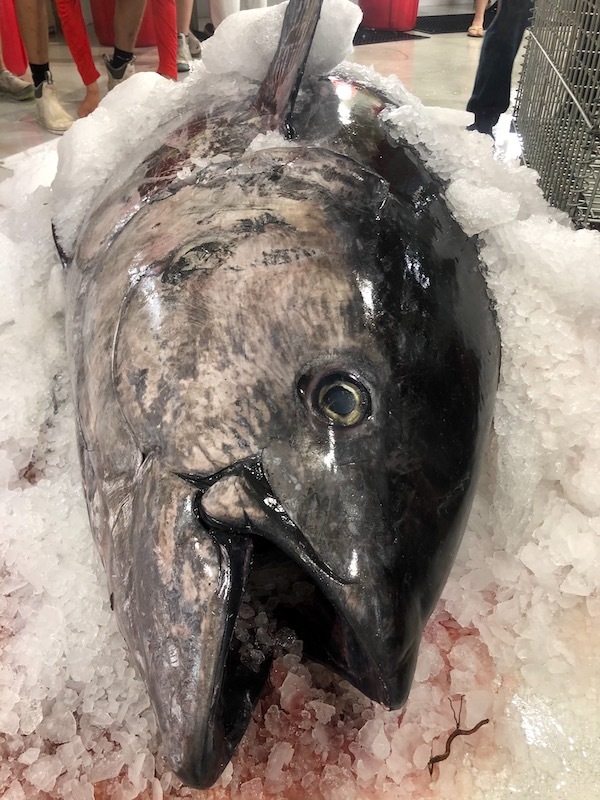 In the 1970s and ’80s, Atlantic bluefin stocks dropped by an estimated 80%. In the 1990s, the National Oceanic and Atmospheric Association and the International Commission for the Conservation of Atlantic Tunas teamed up to oversee one of the most comprehensive fisheries management strategies on the planet. It included a variety of standard tools like seasonal closures and strict retention limits, but also came up with some unique strategies, like the Individual Bluefin Tuna Quota Program, which created economic incentives for commercial fishermen to minimize bluefin bycatch. NOAA also enacted long-line gear restrictions in the Gulf of Mexico that curtailed bluefin bycatch by 70%.

All of that effort paid off. Bluefin stocks increased every year from 2004 to 2017. That year, ICCAT released a report recommending an increase in Western Atlantic Bluefin Harvest quotas. In 2019, the total bluefin biomass for this population had increased by 60% from its lowest point and NOAA released a statement declaring U.S.-caught Atlantic bluefin tuna a sustainable food choice.

Unfortunately, in the wake of the increased quotas and relaxed regulations over the past three years, those stock numbers are starting to dip again. One study estimates that Atlantic bluefin stocks have fallen by nearly 30% since 2017. All of this is to say that bluefin aren’t totally the unsustainable fishery they once were, but their status remains tenuous.

Lancaster says he’s been fishing bluewater for 35 years. He and his wife Toni travel the world in pursuit of pelagic fish, but this was his first-ever bluefin tuna. His family has been enjoying the highly prized meat in a variety of ways, but their favorite preparation is sashimi.

“Just raw tuna on a salt block and garnish it however you want with some hot sauce or wasabi. That's probably my very favorite.”

Lancaster and the whole crew on the Quantified have also been savoring the praise and notoriety of their record catch. 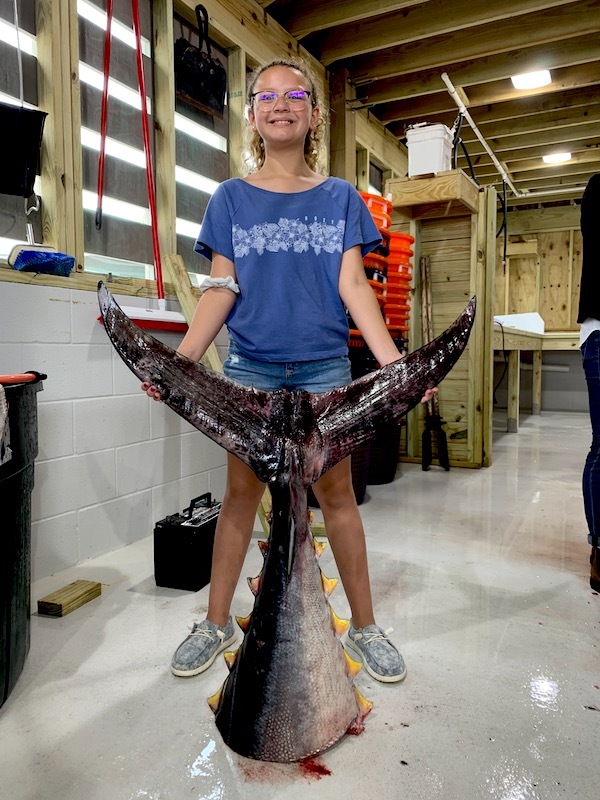 “We're fishing village here in Port Aransas. My [10-year-old] daughter, as soon as she got to school, she was instantly famous with all the kids because they were also excited about it,” he said. “I was getting calls from a lot of my fishing buddies from all over the place, ‘Hey you made the news or hey, you're famous and they'd have to send us links because we don't have Instagram or Facebook or any of that stuff.”

When MeatEater Fishing Director Miles Nolte discussed this story on the Bent Podcast, he dug up some thoughts on fighting big bluefin from the godfather of big game fishing, Ernest Hemingway:

“It is a back-sickening, sinew-straining, man-sized job even with a rod that looks like a hoe handle, but if you land a big tuna after a six-hour fight, fight him man against fish until your muscles are nauseated with the unceasing strain, and finally bring him up alongside the boat, green-blue and silver in the lazy ocean, you will be purified and will be able to enter unabashed into the presence of the very elder gods, and they will make you welcome.”

Saltwater
Get the latest in your inbox
Subscribe to our newsletters to receive regular emails with hand-picked content, gear recommendations, and special deals.
Our picks for the week's best content
For the whitetail obsessed, with Mark Kenyon
Redefining our connection to food, with Danielle Prewett
With Joe Cermele and Crew
Technical apparel for the avid hunter
Purpose-built accessories for hunting and fishing
Quality elk, turkey, waterfowl, and deer calls
Privacy Policy

As a Westerner, it always takes me time to adjust to the sight of the sun sitting on the horizon early in the morning. That’s not the way it works on the Pacific Coast. But there it was, casting gentle, oblique light across the surface of the Laguna Madre, the long strip of inshore shallows that lies between Padre Island and the south Texas mainland. The abundant neotropical birdlife wading the shoreline seemed as exotic as the shirtsleeve...

Here is the very epitome of a first-world problem: I cannot find a type of fishing that I do not enjoy. Of course I like some better than others, and will not be exceptionally disappointed if I never go ice fishing or lob giant hunks of plastic for muskies again. Despite the fact that just about any day on the water gets me excited, from perch-jerking in a parking lot mud puddle on up to tarpon, there’s fishing—and then there’s hand combat with...