Burkhart was fishing with his wife on a stretch of the Cumberland River in northern Tennessee when he set the hook on a seemingly “decent” fish, Burkhart told News Channel 9. He was using a three-inch chunk of skipjack he caught on an 8/0 Gamakatsu hook, trolled on or slightly above the bottom at 40 to 50 feet. The catfish swam towards Burkhart’s boat and then took off on an aggressive first run, proving Burkhart was dealing with more than an average fish.

“It apparently saw me and realized it was hooked,” Burkhart told News Channel 9. “When it took off that time it nearly spooled me."

He said the fight lasted roughly 45 minutes from hookset to net. From there, Burkhart drove to meet a friend at the boat launch and weighed the catfish on an unofficial scale, where he discovered he had potentially broken the record. 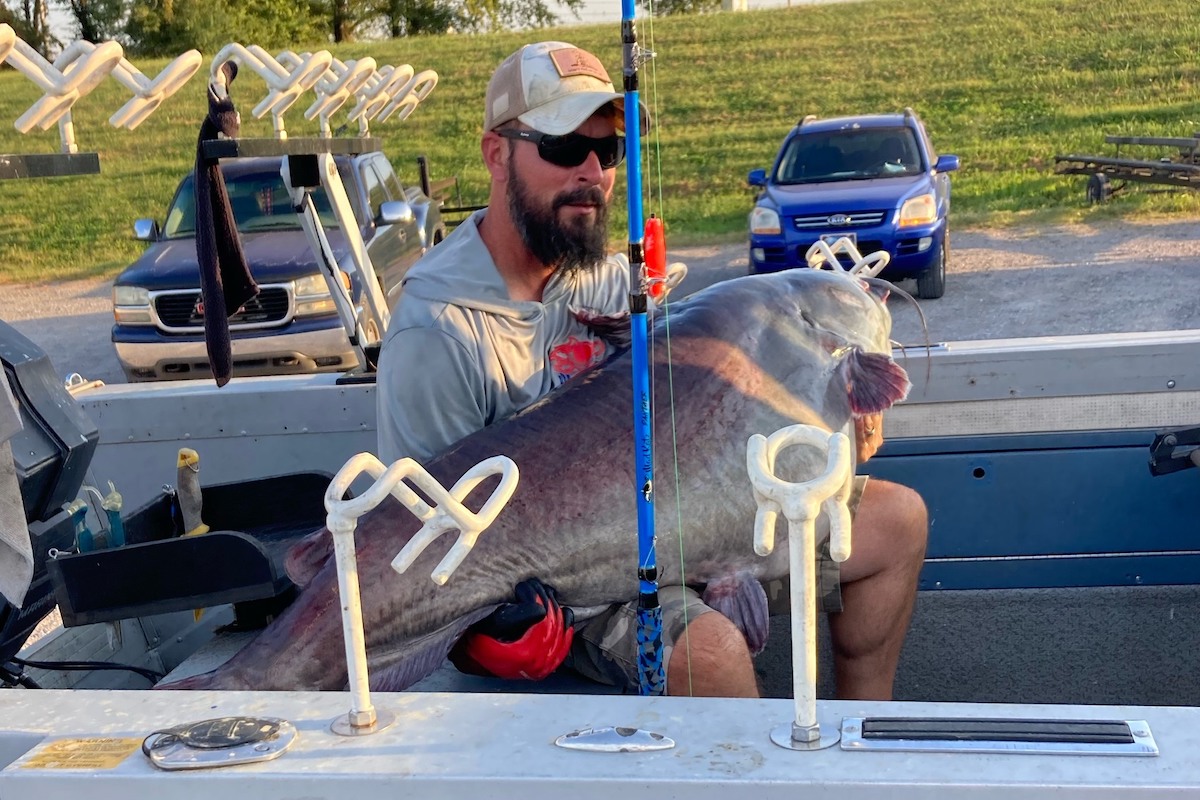 A scale that is certified to be accurate is required when considering a record-breaking catch. Without a scale like that present, Burkhart waited nearly 4 hours with the 118-pound catfish in his livewell for local Tennessee Wildlife Resources Agency officials to find one. Burkhart and TWRA agents prioritized keeping the fish alive and healthy, so finding a scale nearby that could handle the weight of the fish was critical.

"I almost didn't get him certified because I didn't want that fish to die," Burkhart said. "I wanted to do everything in our power to release it." 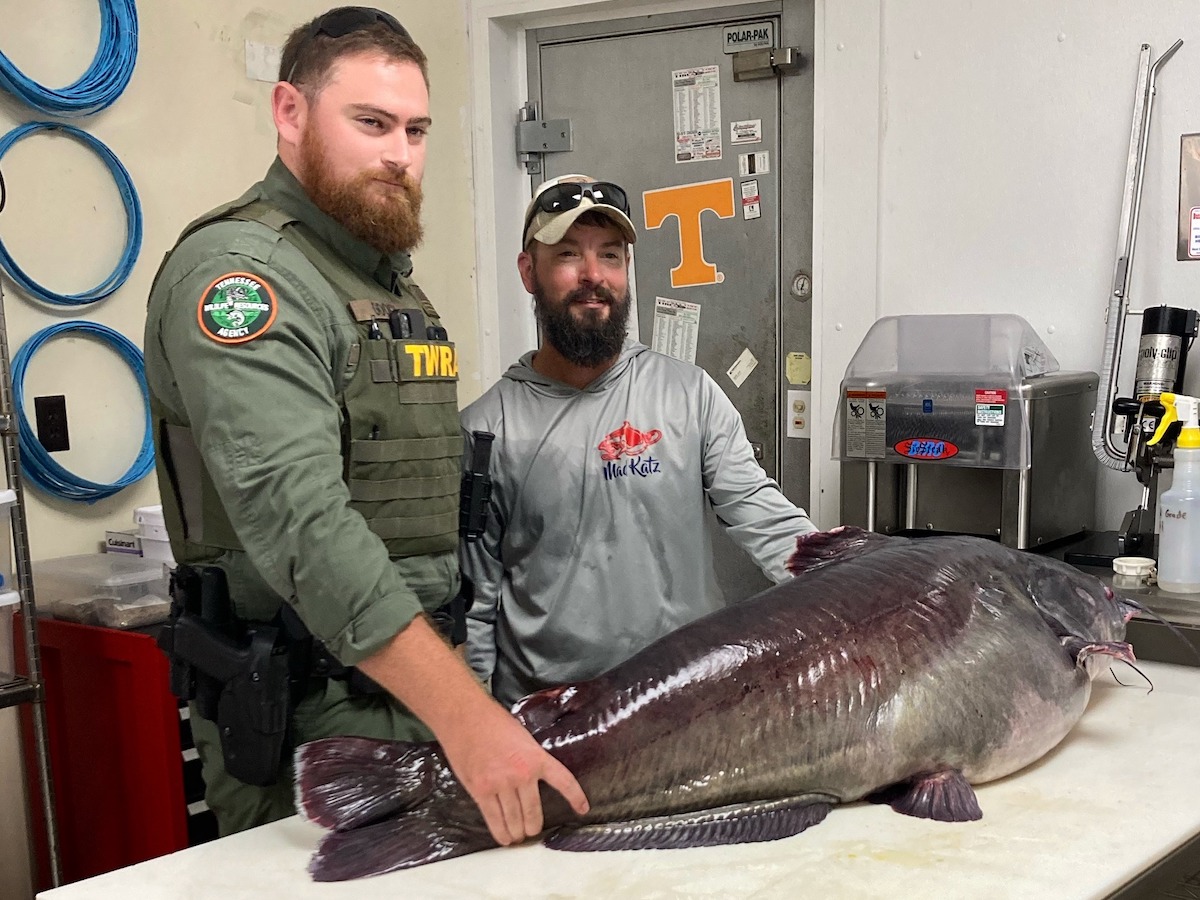 Eventually, TWRA agents found a worthy scale at a local butcher shop. The catfish weighed in 6.7 pounds heavier than the previous record set in 1998, also caught on the Cumberland River. Burkhart’s fish measured an astonishing 54-inches long with a 41-inch girth. Blue catfish are one of the largest freshwater fish in North America, yet the average blue seldom exceeds 20-40 pounds.

"All my buddies are probably more excited than I am,” Burkhart said. “It just really hasn't set in for me yet."

After weighing the behemoth blue, Burkhart drove the fish back to the Cumberland River, where he successfully released it. A video posted on Facebook shows Burkhart and another person shoulder-deep in the river reviving the catfish. Burkhart told reporters the two-minute video is only a fraction of the roughly 30 minutes they spent in the water, ensuring it swam away healthy. Individuals on the TWRA Facebook page praised Burkhart for releasing the fish and taking measures to maintain its health.

Tennessee anglers can legally harvest one catfish over 34 inches a day. But Burkhart released the big blue, saying he’d keep the small ones but let his big catch live to “catch another day.” 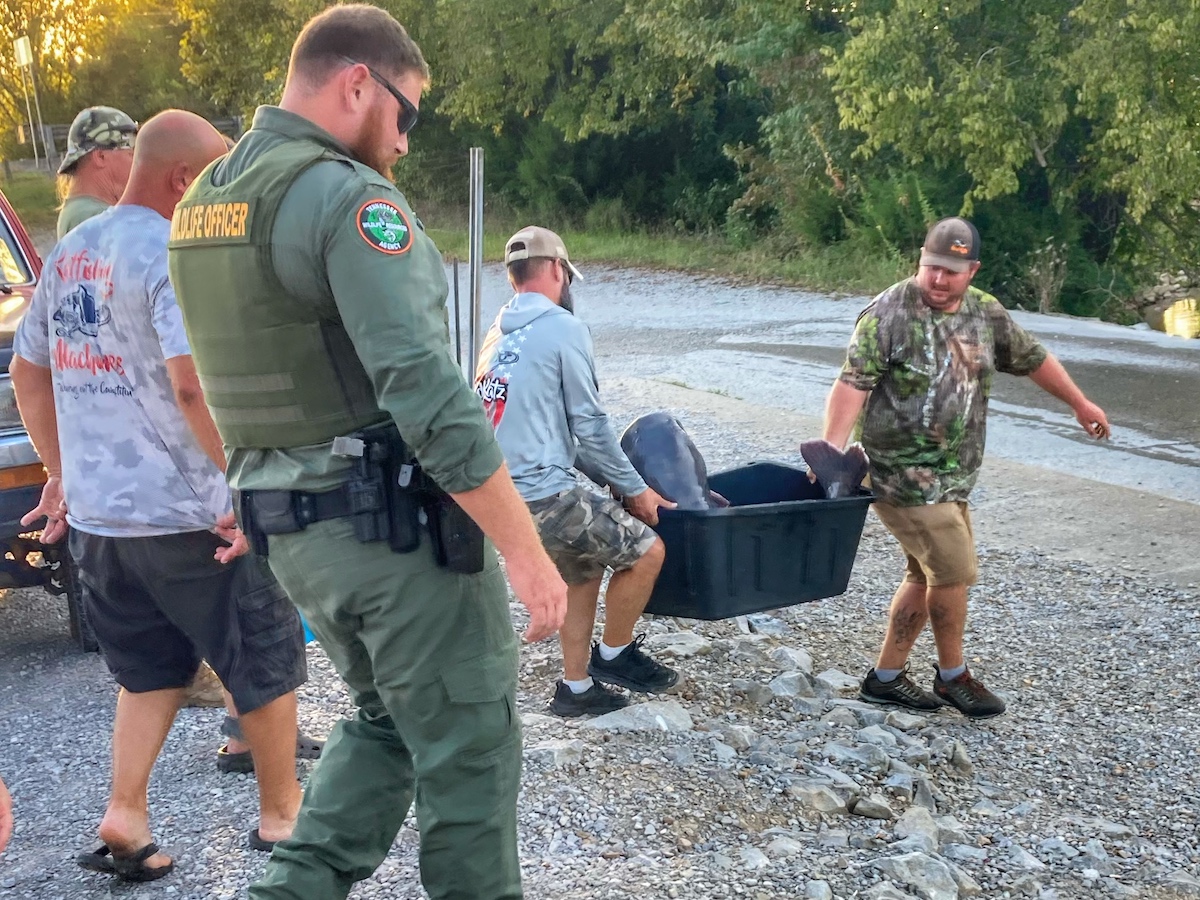 Roy Groves was one of the greatest catfishermen in history. His fishing prowess made him famous among fellow river rats in the Great Plains, and grainy photos of him with enormous catfish spread across two decades show why. At one point, Groves held both world and state records for blue catfish and channel catfish. He claimed each in 1949 with a 94-pound blue cat and 55-pound channel cat from the James River in South Dakota. The blue cat world...

Catfish are not exactly selective when it comes to their diet. In fact, they’re some of the most opportunistic feeders in freshwater. But that doesn’t mean they’re always easy to catch. Water temp, clarity, current, time of day and time of year are all influence their willingness and ability to feed. They’re also factors you need to consider when selecting bait. We’re not talking about breaking records here; we’re talking about catching dinner...

Two hundred Coho salmon eggs came to Mrs. Hodges’s 3rd, 4th, and 5th-grade classroom this past January. The curious class watched, waited, and learned how new salmon come into existence. They took full responsibility for the well-being of the 200 little lives, monitoring and recording the water temperature and oxygen levels of the classroom tank every day. In early February, the eggs started to move. By the end of February, they hatched and...