The decade-long search for Forrest Fenn’s treasure ended two years ago, but the hunt for answers has not. Although details have slowly surfaced since Jack Stuef located the gold-filled chest, the greatest Fenn mystery of all remained unsolved: Where was the treasure hidden? Finally last week, we got that answer.

Here’s a brief timeline on how we got here. If you’re already well-versed in the story of the Fenn treasure, then skip to the next page break.

2010 - Fenn, an 80-year-old art dealer and writer, announces that he’s hidden a treasure worth $2 million in the Rocky Mountains. The contents aren’t fully known, but there were 19th-century coins, gold nuggets, rare jewels, pre-Columbian artifacts, and more inside a small bronze chest.

The only hints he provides about the bounty’s location are that it’s between 5,000 and 10,200 feet in elevation, is located near trees, and that he hauled it there himself in two trips. He also states that there are 10 or so other clues hidden in a poem in his self-published book, “The Thrill of the Chase.”

As I have gone alone in there And with my treasures bold, I can keep my secret where, And hint of riches new and old. Begin it where warm waters halt And take it in the canyon down, Not far, but too far to walk. Put in below the home of Brown. From there it’s no place for the meek, The end is drawing ever nigh; There’ll be no paddle up your creek, Just heavy loads and water high. If you’ve been wise and found the blaze, Look quickly down, your quest to cease, But tarry scant with marvel gaze, Just take the chest and go in peace. So why is it that I must go And leave my trove for all to seek? The answer I already know I’ve done it tired, and now I’m weak. So hear me all and listen good, Your effort will be worth the cold. If you are brave and in the wood I give you title to the gold. 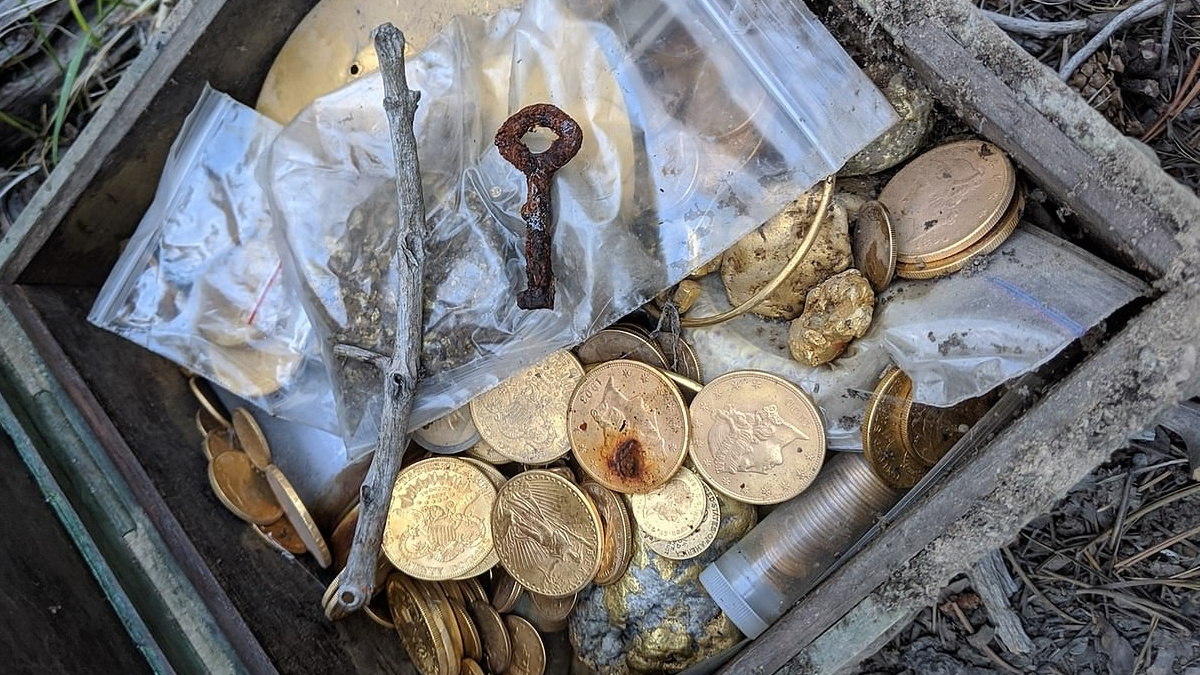 June 6, 2020 – Fenn writes on his blog that the treasure has been found. He initially doesn’t release any details on the finder or location. “I do not know the person who found it, but the poem in my book led him to the precise spot,” Fenn writes.

June 16, 2020 – Fenn posts three photos of him with the treasure in what appears to be a lawyer’s office. Again, he doesn’t include any new information. “The finder wants me to remain silent and I always said the finder gets to make those two calls. Who and where,” Fenn writes.

July 22, 2020 – Fenn writes a blog post for the first time in over a month. He says he feels an obligation to the community to at minimum disclose which state the treasure was found. “Because I promised the finder I would not reveal who found it or where, I have remained mostly silent,” Fenn writes. “However, the finder understands how important closure is for many searchers, so today he agreed that we should reveal that the treasure was found in Wyoming.”

September 23, 2020 – Medium publishes a blog entitled “A Remembrance of Forrest Fenn” from an anonymous author that simply goes by The Finder. “I am the person who found Forrest’s famed treasure. The moment it happened was not the triumphant Hollywood ending some surely envisioned; it just felt like I had just survived something and was fortunate to come out on the other end,” The Finder writes.

The Finder says it took him 25 full days of scouring one specific area to locate the treasure. And although he solved the riddle in 2018, he wasn’t able to locate the actual chest until two years later.

“This treasure hunt was the most frustrating experience of my life. There were a few times when I, exhausted, covered in scratches and bites and sweat and pine pitch, and nearing the end of my day’s water supply, sat down on a downed tree and just cried alone in the woods in sheer frustration.”

December 7, 2020 – Outside Magazine publishes an article titled “The Man Who Found Forrest Fenn’s Treasure,” written by Daniel Barbarisi. Barbarisi reveals that The Finder is ready to lose his anonymity. “It took two months of correspondence before the man who found Forrest Fenn’s treasure told me his name,” Barbarisi writes. “And that’s when I learned that a 32-year-old Michigan native and medical student was the person who had finally solved Fenn’s poem. His name is Jack Stuef.” You can read more about Stuef and his backstory here.

We may have never known exactly where the treasure was hidden, but a frivolous lawsuit against Fenn has brought forth never-before-seen details.

Jamie McCracken, a Floridian who believes Fenn moved the treasure four times to keep him from finding it, recently launched a lawsuit against the deceased antiquities dealer. McCracken is convinced Fenn was monitoring his movements and would relocate the treasure every time McCracken got close. McCracken claims this was made possible by Fenn buying a property near his search spot to keep tabs on McCracken’s hunt.

In an effort to prove that Fenn didn’t move the treasure, his lawyer revealed that Fenn told Yellowstone National Park’s chief ranger, Sarah Davis, where it was hidden. Fenn had this conversation with Davis in 2020 after the treasure was found by Stuef. Fenn told Davis where he stashed the treasure so that Davis could determine if the area could handle extra foot traffic from tourists who wanted to visit the treasure’s former location. Davis’s verdict was that the area is not equipped to handle a heavy human presence, so they agreed to keep its location a secret.

Fenn’s lawyer has also subpoenaed Stuef, who could be called to say that he solved Fenn’s riddle with no help from Fenn, and that the treasure was found in the exact spot where it was left in 2010. If Fenn’s lawyers do question Stuef, then McCracken’s legal team will also get a chance. With Stuef under oath, this presents a scenario where he has to reveal the chest’s exact location.

The Yellowstone revelation isn’t surprising. In July 2020, one month after the chest was found, I wrote an article about the four best theories on Fenn’s treasure location. One of my favorite solves involved the Custer Gallatin National Forest in Montana, which borders Yellowstone National Park. More specifically, I suspected it was somewhere around the town of Gardiner, which sits less than a mile from the park’s north entrance. (I even planned hunts and rockhounding adventures in the area before the treasure was found, just in case, you know, I’d stumble across it.)

In November 2020, five months after the chest was found, MeatEater podcast guest and journalist Benjamin Wallace published an article in New York Magazine that followed a group of the treasure’s most feverish hunters. They too were certain the chest was hidden in Yellowstone National Park and even employed a dog that could sniff precious metals buried up to 40 feet underground.

After producing a GPS-based solve that used homophones (for = four, to = two) and kangaroo words (done = one), they came up with a longitude and latitude that fell within the park’s boundaries. Once they searched that location and had a positive hit from their treasure-hunting dog, they determined they found where the chest used to sit.

So, what comes next for those seeking answers on the treasure’s exact location? Well, the McCracken proceedings are set to begin in June. If the lawsuit advances and Stuef is forced to provide a deposition, we’ll likely find out precisely where the bronze chest sat in the wilderness for a decade. But if this passes without Stuef coming under oath, then modern history’s greatest treasure hunt might end with a hiding spot reveal that's 3,500 square miles.

When Forrest Fenn announced his famed treasure was claimed in June, he said he wouldn’t reveal the finder’s identity without his permission. After Fenn died in September it seemed like that day would never come. But, seven months later, the finder has finally come forward. Here’s a brief timeline on how we got here: June 6 – Fenn writes on his blog that the treasure has been found. He initially doesn’t release any details on the finder or...

Earlier this month, I wrote about how the greatest treasure hunt of the modern era came to an end. Forrest Fenn announced that the trunk he hid in the Rocky Mountains more than a decade ago was discovered by an unnamed man. While Fenn has been light on details so far, he did post three pictures of the chest and its contents. Inside Edition had an antiquities appraiser look at the photos, who confirmed earlier guesses that the treasure is worth...