It’s been a month since Forrest Fenn announced his treasure was claimed, but the public is still not much closer to knowing the bounty’s location or finder. Despite photos surfacing of the chest and its contents, Fenn said he won’t reveal more details until the man from “back East” gives him the OK. Many speculate that Fenn is extending a courtesy to the finder for tax purposes, keeping the federal government in the dark—since they likely manage the public land where it was found.

Fenn estimated 350,000 people participated in the decade-long treasure hunt, which explains why the public is so thirsty for more information. As the Santa Fe New Mexican (Fenn’s hometown newspaper) put it, this is like a detective solving a murder without identifying the killer. And, like with an actual homicide, the rumor mill hasn’t slowed down.

Spend a bit of time in certain corners of the blogosphere or social media and you’ll find hundreds of theories on the treasure’s location. These armchair quarterbacks have no shortage of conviction on why their hypothesis is right and everyone else’s is wrong, despite everybody sharing the same clues.

Here’s what we do know: The trunk was located between 5,000 and 10,200 feet in elevation in the Rocky Mountains. It was near trees, but not in proximity to a human trail, cemetery, or mine. Fenn himself hauled the treasure there in two trips, noting that it could be reached by an 80-year-old man. The 10 or so other clues are much more vague since their source is a poem in Fenn’s book “The Thrill of the Chase.”

As I have gone alone in there
And with my treasures bold,
I can keep my secret where,
And hint of riches new and old.

Begin it where warm waters halt
And take it in the canyon down,
Not far, but too far to walk.
Put in below the home of Brown.

From there it’s no place for the meek,
The end is drawing ever nigh;
There’ll be no paddle up your creek,
Just heavy loads and water high.

If you’ve been wise and found the blaze,
Look quickly down, your quest to cease,
But tarry scant with marvel gaze,
Just take the chest and go in peace.

So why is it that I must go
And leave my trove for all to seek?
The answer I already know
I’ve done it tired, and now I’m weak.

So hear me all and listen good,
Your effort will be worth the cold.
If you are brave and in the wood
I give you title to the gold.

Although there are literally millions of possible hiding spots based off those hints, many people focused their search in similar areas. If internet sleuths are correct, the treasure was most likely found in one of these four locations.

Custer Gallatin National Forest, Montana
Bordering the northwestern corner of Yellowstone National Park, the Custer Gallatin National Forest was a hot spot for Fenn treasure hunting activity. One of the major reasons why is Fenn vacationed there as a kid (and many times after), sharing black-and-white photos of his trips and writing fondly of the park in the very same book as the poem.

Some folks look to the Hebgen Lake area near West Yellowstone, Montana. The region is famous for the 1959 Yellowstone earthquake that killed 28 people and completely altered the landscape. Jason Brey, district ranger at the Hebgen Lake Ranger Station, told Vox in a 2013 article that the area received regular treasure hunting traffic.

“Every other week, someone comes in asking about Fenn’s treasure,” Brey said. “They’re looking for maps, places to camp, and the best way to access the areas. They don’t want advice from us—they’ve got it made up in their mind already. It’s amazing how confident they are that it’s here.”

Farther east, others focused their efforts in Paradise Valley outside Gardiner, Montana. Many Fenn treasure enthusiasts found similarities in clues. Where the warm waters halt? The Boiling River just inside Yellowstone. Take it in the canyon down? Must be the Yankee Jim Canyon. The home of Brown? The Joe Brown Boat Launch on the Yellowstone, of course. The end is drawing ever nigh? A clever homonym for Nye, Montana.

Indiana treasure hunter David Christensen, who was ticketed for illegally rappelling into the Grand Canyon of Yellowstone in early 2020, was so sure the treasure was in the area that he tried to use the riddle as his defense in court.

“You might call me a lunatic, whatever, but I feel wholeheartedly I solved that Fenn treasure thing,” Christensen told U.S. Magistrate Judge Mark Carman. “I still feel it’s down there, your honor. I dare anybody to figure out a better solve.” 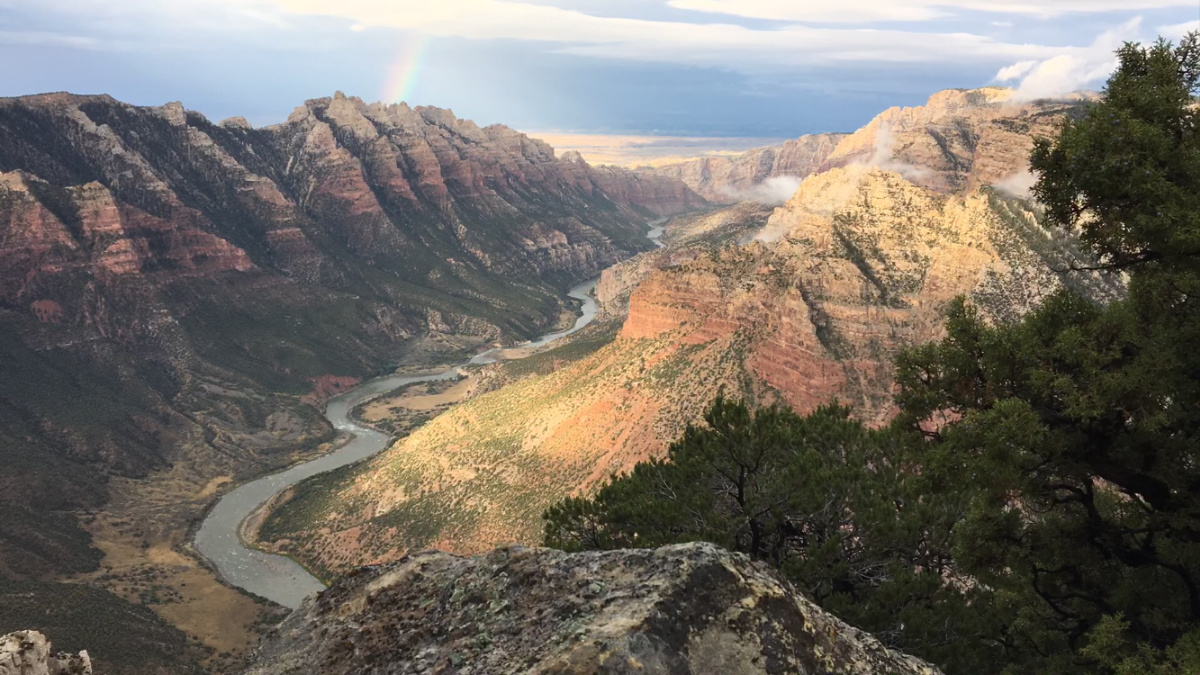 Warm Springs Cliff is the warm water. Brown’s Park is the home of Brown. Joseph Meek, a famous fur trapper from the 19th century, left the area when fur trade slowed down, making it no place for the meek. Or, the meek clue could be applied to the Swinging Bridge at Brown’s Park, a 320-foot historic suspension bridge that sways when you drive over it.

Some were so convinced this was the treasure’s location that they put their life on the line looking for it. In March of this year, two snowmobilers in Dinosaur National Monument got lost twice while pursuing the bounty. The men rented sleds from a nearby business but ditched them when they ran out of sufficient snow.

One man was airlifted to safety by helicopter. The other was found dead (the fifth and final person to die in pursuit of the treasure). Just two weeks earlier, they were rescued by the same crew, five miles from where they got lost the second time. Search and rescue had a good idea where to find the men when they located the pickup with Fenn’s book in it, but it was too late for the duo who had packed only a few bottles of water and candy bars.

“They were not dressed appropriately for the conditions, even for a day trip, and definitely not dressed for if something happened and they couldn’t get out of there,” said Lt. Chip McIntyre of the Moffat County Sheriff’s Office. “The survivor said at some point they’d tried to get out of where they were to call 911. They knew they were in a bad situation.”

Carson National Forest, New Mexico
Maybe the most popular region for treasure hunters was northern New Mexico and southern Colorado, if for no other reason than proximity to Fenn’s home in Santa Fe. Lost interviews and internet hearsay claim that Fenn supposedly made a day trip from his house to hide the treasure. If this is true, then the southernmost point of the Rocky Mountains, which lies just north of Santa Fe, is the most likely hiding spot.

Some suspect that the riches new and old”points to the treasure definitely being in New Mexico. Where the warm waters halt is where Rio Tusas and Rio Vallocitos meet to form Rio Ojo Caliente (meaning “hot eye” in Spanish). The blaze could be Burned Mountain Trail.

Two adventure bloggers from Canada were so sure about the treasure’s hiding spot in Carson National Forest that they made eight trips to seek out the chest in 2016 and 2017. They even claimed to have found Fenn’s markers along the way in the form of wooden crosses to let them know they were on the right path.

“We managed to decode about 75% of Fenn’s clues,” they wrote in a blog post summarizing their search. “We were hoping it would take one more trip to finish it off, not realizing the difficulty of the last clue.”

An Albuquerque resident was on a similar trail, but thought the treasure to be a bit further south. Bob Hosko told the Santa Fe New Mexican that he obsessed over the search and thought the most damning clue was Fenn’s particular hint about the treasure not being above 10,200 feet, which happens to be the exact elevation of Santa Fe Ski Basin’s parking lot.

Following other clues led him to a dead end, but Hosko thought he was close. So close, in fact, that he emailed Fenn and told him about his explorations and how he planned to find it this summer. But three days later, the treasure was found, which Hosko doesn’t think was a coincidence. Rather, he believes Fenn got nervous and sent someone to the treasure’s location to remove it.

“It took me down hard,” Hosko told the newspaper. “I always put boots on the ground. I was out there. Now I try to mentally block it out and say, ‘Bob, you had some fun.’” 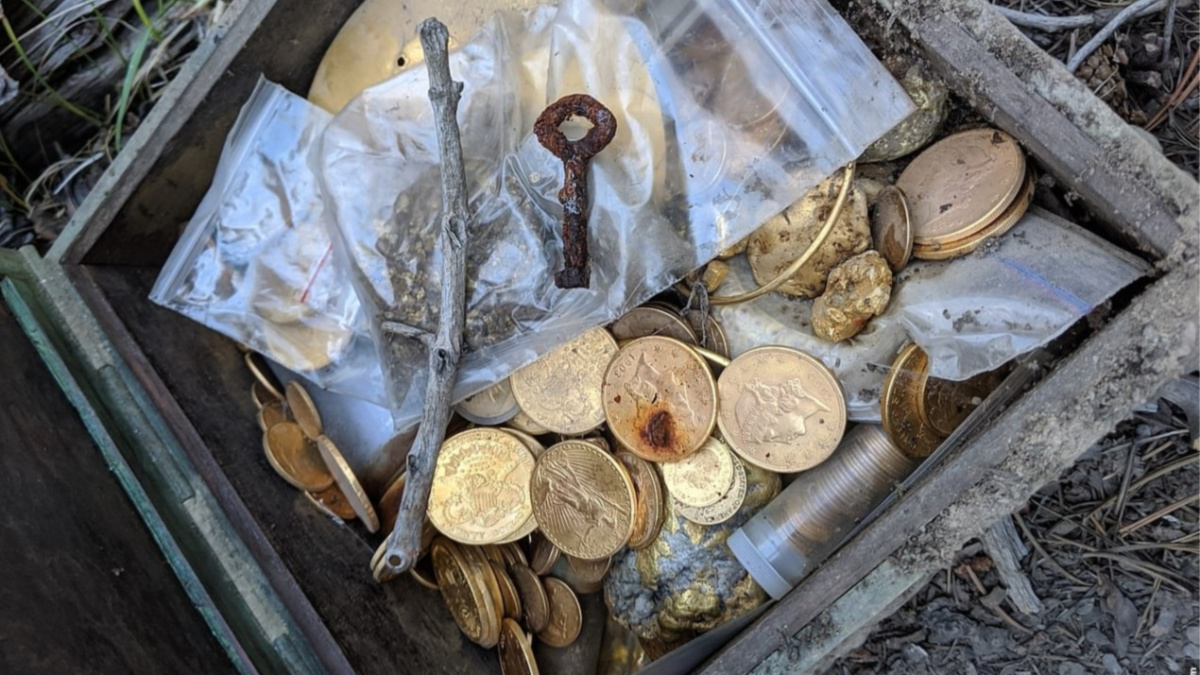 There Was No Treasure
Hosko’s takeaway is exactly what Fenn wanted, according to Fenn himself. He has said all along that his goal with the treasure hunt was to motivate people to get outside, explore nature, and have fun. But there’s a growing part of the Fenn community that thinks the entire thing was a farce. And the longer Fenn goes without providing more specifics on the treasure’s contents, location, and finder, the larger that segment grows.

One important detail leading people to believe this was a hoax is that the poem was found in Fenn’s self-published book. Cynics from the beginning have seen this as a red flag. At one point, Fenn’s book was such a hot commodity that it was selling for upwards of $100 on eBay and Amazon. Writing a book with a treasure map that leads to a $1 million haul seems like pretty solid marketing.

Fenn also has a blemished background that casts doubt on the treasure’s authenticity and legality. In 2009, Fenn’s home was raided as part of an investigation by the Federal Bureau of Investigation and Bureau of Land Management. Agents were taking down suspected looters, dealers, and collectors for possessing artifacts from illegal digs in the Four Corners area. During the raid, agents only took four items from his collection of thousands, and charges were never filed. Less than a year after the raid, Fenn supposedly hid the chest.

Treasure or not, Fenn certainly captured the imaginations of hundreds of thousands and inspired them to explore some of the most beautiful places on the continent—not to mention the added tourism that states like New Mexico, Wyoming, Colorado, and Montana enjoyed (and occasionally promoted). For many, the treasure was going on an adventure, even if it only meant a million-dollar prize for one.

The decade-long search for Forrest Fenn’s treasure ended two years ago, but the hunt for answers has not. Although details have slowly surfaced since Jack Stuef located the gold-filled chest, the greatest Fenn mystery of all remained unsolved: Where was the treasure hidden? Finally last week, we got that answer. Here’s a brief timeline on how we got here. If you’re already well-versed in the story of the Fenn treasure, then skip to the next page...

Earlier this month, I wrote about how the greatest treasure hunt of the modern era came to an end. Forrest Fenn announced that the trunk he hid in the Rocky Mountains more than a decade ago was discovered by an unnamed man. While Fenn has been light on details so far, he did post three pictures of the chest and its contents. Inside Edition had an antiquities appraiser look at the photos, who confirmed earlier guesses that the treasure is worth...