Both hunters and archaeologists need to be able to properly read sign like tracks, that animals leave behind. But in the case of archaeologists, they may be looking for tracks that are thousands of years old. Recently, researchers in New Mexico’s White Sands National Monument uncovered some fascinating fossilized tracks that map out an ancient hunt that took place over 11,700 years ago, during the Ice Age.

In a remote backcountry area of White Sands, scientists discovered a series of “ghost fossil” tracks left by a giant ground sloth and a band of human hunters. Finding these ghost fossils is like hitting the lottery since shifting sands can cover them up at any time and wind and water can quickly erode them out of existence. The tracks tell an incredible story of how humans may have hunted giant Ice Age megafauna like ground sloths or mammoths. This is important because recently some theories suggest that, along with disease, climate, and habitat changes, humans may have played a significant role in the extinction of large, highly specialized late-Pleistocene era mammals. Because White Sands National Monument is home to a high concentration of these fossilized Ice Age human and animal tracks, the area offers researchers a special opportunity to study the relationship between ancient humans and animals.
That relationship plays out in the set of human footprints that are laid down on top of a giant sloth’s tracks. This suggests a lone human tracker followed a giant ground sloth, pushing it towards a waiting group of hunters. The nature of the tracks points to an active pursuit and struggle. Smeared footprints and quick changes in direction on the part of the sloth, which tended to move slowly in a straight line, along with human footprints surrounding the sloth, suggest the hunters actively harassed the animal in an attempt to kill it, probably with spears. Interestingly, fossilized tracks of human children and adults suggest the hunt included a large family group of human hunters. 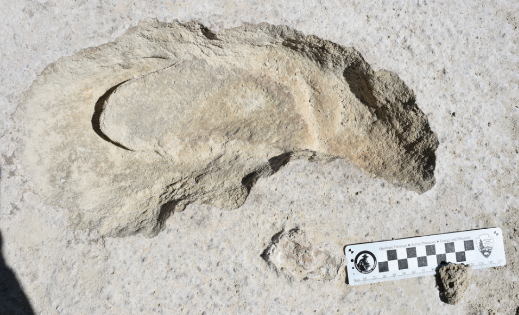 Human footprint inside giant ground sloth track- National Park System photo
Some scientists argue the tracks may simply be coincidental in nature. While it’s impossible to know exactly what happened in White Sands so long ago, the tracks do tell a story. And it is incredible to contemplate the dangerous hunt that may have taken place here thousands of years ago. Learn more about the discovery in White Sands National Monument here.

Russian scientists recently unearthed an unusual specimen—the intact remains of a long-extinct cave bear, providing a lens into understanding one of the largest predators to ever roam the planet. The preserved carcass, revealed by melting permafrost and still barring its teeth, was discovered by native reindeer herders. Researchers at the North-Eastern Federal University in Yakutsk, Siberia, removed the bear in order to study it. “Today this is...

The Boozy History of Johnny Appleseed

The world knows two different Johnny Appleseeds: the Disney version and the real version. The fictitious Johnny traveled the Midwest with a tin pot on his head and seeds in his pocket. As he wandered the Heartland barefoot, he’d cast out apple seeds to spread his favorite fruit.

The Largest Living Thing on Earth

What exactly is the largest living organism is the subject of some debate. There’s the largest animal—the blue whale—weighing up to an estimated 330,000 pounds and taping out beyond 80 feet in length. There’s the biggest tree—a giant sequoia in California named General Sherman that’s 275 feet tall with a 25-foot circumference.