How to Make the Best Bánh Mì

Bánh mì, the Vietnamese equivalent of a hoagie, sub, or grinder, is a beautiful example of what happens when two distinct culinary cultures blend.

Bánh mì translates to “baked” and “wheat” or “bread.” At its core, it's a french baguette filled with Vietnamese ingredients. Crispy bread, pickled veggies, roasted meat, pâté, and savory mayo make this sandwich stand out from your usual cold cut. It’s an edible manifestation of two distinct food cultures wrapped in carbohydrates. It’s an East meets West kind of a thing, complete with classic French bread, Southeast Asian ingredients, adaptation, and improvisation. It’s a refreshing take on a timeless food, and it works even better when you introduce some American wild game.

The French baguette was made popular in Vietnam in the late 18th century during the European occupation of the Asian nation. It’s been a staple food item since and has adapted and taken on its own distinct characteristics. Rice flour is often blended with wheat flour when making the dough, which makes the already crusty bread lighter and crispier. All your classic sandwich characters are present, though represented in a unique, South Pacific way.

The most important part of a good bánh mì might be the bread. Finding or making a French baguette that is airy and fluffy on the inside with a thin, extra-crispy exterior is not always easy. If you have access to a bakery, look for rice flour baguettes or ask the bakers for recommendations. Baguettes that are too dense or too soft ruin the textural experience of the sandwich. You want the crust to explode when you bite into it—there should be crumbs everywhere when you're eating one of these.

The protein part of the bánh mì can range from grilled chicken to liver pâté, or head cheese to barbequed pork. The commonality is robust flavor. Meats are generally marinated before cooking, or in the case of pâté or head cheese, already have an assertive flavor presence. I prefer a soy or hoisin--based marinade for the grilled meats but the world is your oyster, just keep in mind you’ll need strong flavors to pair with the pickled veggies. Smoked wild turkey breast marinated with soy sauce, spicy chili peppers, and lime juice is my go-to bánh mì protein.

Like most popular sandwiches, a good bánh mì is all about balancing texture, flavor, and structural integrity. Mayo is often blended with chilis or soy sauce to give it more depth, and it also prevents some excess moisture from seeping into the bread, keeping it fluffy. Mayo also adds fat and richness to the overall dish.

Picked carrots and radish are constants in a bánh mì. Also known as “do chau,” they add crunch and acid in much the same way pickled cucumbers or onions do to Western sandwiches.

Fresh cilantro and thinly sliced cucumber replace the lettuce in a bánh mì. The cilantro gives the sandwich another distinct Vietnamese flavor and the cucumber adds a little bit of texture as well as serving the same purpose of lettuce in most sandwiches—keeping the bread from getting soggy.

Once you’ve sourced good bread, the rest of the bánh mì comes together as fast as any other sandwich. Make a batch of pickled radish and carrots ahead of time, keep a savory mayo in the fridge, and you'll be minutes away from a refreshing and filling sandwich.

Included below are a couple basic recipes for do chau and smoked soy-lime turkey breast to get you started on your own bánh mì journey. 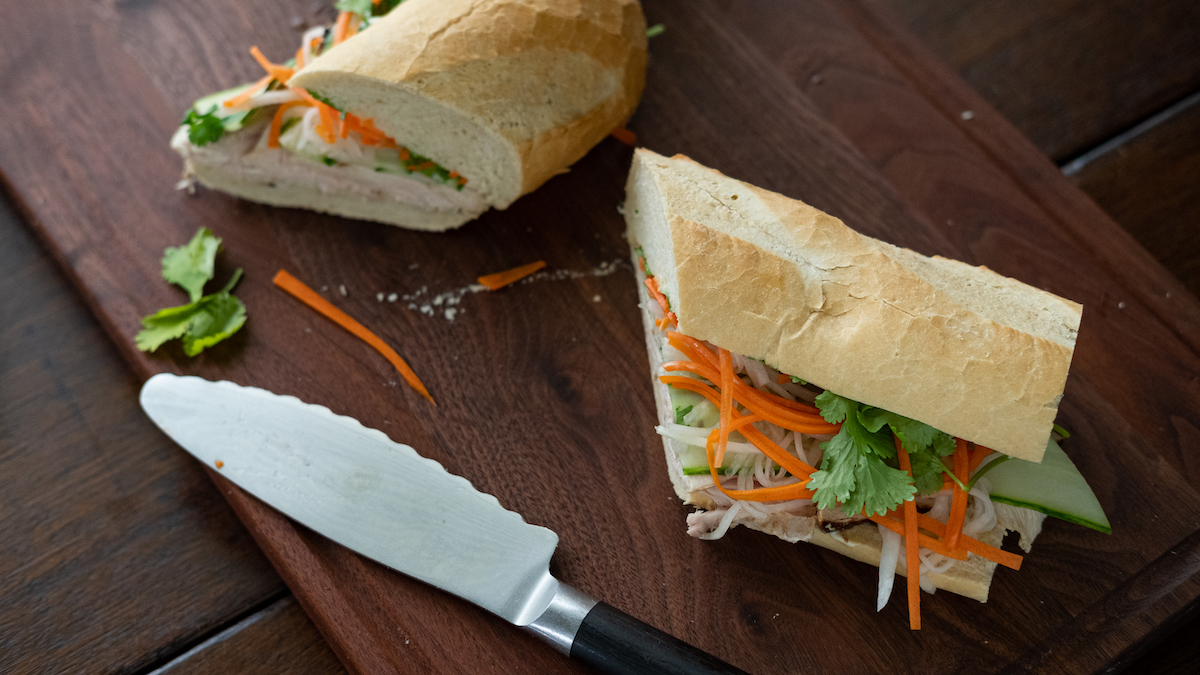 Do Chau or Pickled Carrots and Radish

How to Make Carpaccio

Thinly sliced raw meat. That phrase doesn’t exactly have a three-Michelin-star vibe to it, but that’s what carpaccio is. Thanks to fancy restaurants and modern refrigeration, consuming raw meats and fish is more popular than ever. While the popularity of carpaccio, tartare, and sushi represents a remarkable shift from the “well-done everything” style of just a couple of generations ago, there is still a misconception that raw foods can only be...

Confit is an ancient cooking method with a very simple technique—salting meat then cooking it low and slow in a bath of fat until it's unctuous, rich, and falling off the bone. Traditionally this was done for food preservation purposes, but it lives on in the age of refrigeration because it might be the best way to cook anything that benefits from a long cook time to break down connective tissue. Confit is mostly used with duck and goose but it's...

How to Make Sauerkraut

Making sauerkraut is similar to making charcuterie—salt and time are the key ingredients. Unlike charcuterie, however, sauerkraut (or any fermented vegetable) is a little more forgiving in the process. Sauerkraut is simply fermented cabbage with or without spices. Typically, chefs will include caraway seed and juniper berry. The basic flow of making sauerkraut goes something like this: slice the cabbage, add salt, massage to extract as much water...