When you go will have a big impact on your style of hunting as tactics change from one week to the next. For instance, calling works very well during the rut, but it may not work at all once rifle seasons begin.

All of these factors should be taken into consideration. Some states, like Montana, offer general elk tags that are valid throughout much of the state for the nearly three months of archery and rifle seasons. This gives hunters a lot of leeway when it comes to timing their hunt. In other places like Colorado, a rifle tag may only be valid for a single five-day rifle elk season in a specific game management unit. In this situation, a hunter needs to be committed no matter the weather or hunting pressure.

Here’s a monthly breakdown of elk hunting seasons and what hunters can expect as far as weather, hunting pressure and elk behavior. This information is geared towards general, over-the-counter or easy-to-draw elk tags that most novice elk hunters will have in their pocket.

September
Most archery elk seasons open in early September, although some open in late August. Muzzleloader and rifle hunts may also be available during this time period, so elk hunters aren’t necessarily limited to archery gear.

Early archery hunting generally coincides with warm weather and elk that aren’t very active during the day. Hunting green alpine meadows in the morning and evening can be broken up by sitting water holes and wallows at midday. Calling in these spots may bring in a curious bull or cow.

By mid-September the rut has kicked in and elk, especially bulls, become extremely vocal. Elk can be very active all day and bugling bulls can be located and drawn into bow range using calls. The rut generally runs through the end of September or early October.

Hunting pressure during archery season is generally much lower than in rifle season, but the popularity of archery elk hunting during the rut has increased immensely all over the West. Pressure in areas with easy access and over-the-counter tags can be very high, so rutting activity is often more intense at night in these regions. Even some backcountry wilderness areas experience enough hunting pressure during archery season to silence bugling bulls.

Weather in the Rockies during September is variable but generally mild. If it’s hot and dry, search for smaller meadows hidden in shady, timbered creek drainages where water will attract elk. If you find yourself in an early season snow storm, keep hunting. Rutting elk may stay active all day in these conditions. 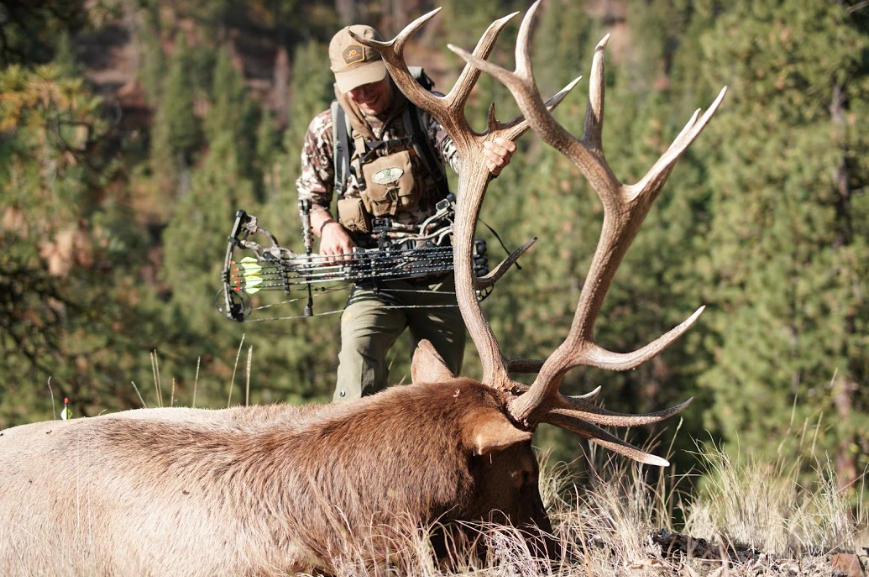 October
State agencies usually give elk a break for a couple weeks following archery season. Most rifle seasons open up around the middle of October. The rut is mostly over once rifle seasons start, although there may be some residual bugling and rut activity during the first few days of the season.

It can be worth packing some elk calls just in case, but usually most bulls have begun to peel away from the groups of cows they’ve been following around for weeks. They go off by themselves or in small bachelor groups to hidden hell holes in remote canyons to recover from the rut and avoid hunting pressure.

Elk tactics are usually much different during rifle season than in archery season, especially once the shooting starts. Public lands elk react to pressure quickly where there are a lot of hunters. Expect to only find elk feeding out in the open for an hour or two in the early morning and late afternoon.

The most effective tactic is to find a high vantage point before sunrise where you can survey a large area, using your optics to spot elk. Once you locate animals, pick a concealed route that keeps the wind in your face to make a stalk.

Some hunters will also sneak quietly into daytime bedding areas, still-hunting through aspens and dark timber where elk hide from other hunters. This technique can work well, but it takes a patient, stealthy hunter to pull it off. If you bump a herd of elk during rifle season, they’ll hightail it a long ways into steeper, rougher country.

The possibility of cold, snowy weather increases during October. Early snow may push elk out of the high country, but it’s far from a sure thing. It takes a lot of snow to drive elk down to lower elevations. A more likely scenario is that a warm, dry spell with hunting pressure will push elk into the cooler, thick timber. These areas can be found on steep north- and east-facing slopes. 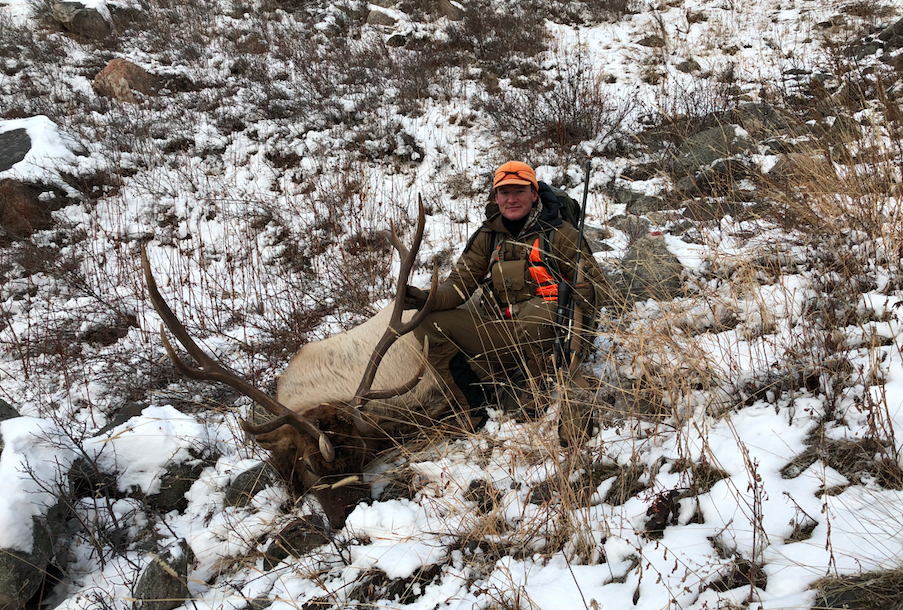 November
By the time November rolls around and rifle season has been open for a while, public lands elk become seriously paranoid. Mature elk that have made it through a few hunting seasons know not to expose themselves during daylight hours.

In high pressure hunting areas, they may become completely nocturnal. At best, they might only feed out in the open for a few minutes in the morning before heading for the timber. In the evening, they may not emerge until legal shooting light is almost over.

If you find elk in the morning but you’re unable to close the distance before they head for the timber, plan an ambush for the evening hunt. If legal shooting light ends before you can get a shot, you’ll want to be back in position the next morning. Your ambush spot needs to be within shooting range of where elk enter the timber in the morning or leave in the evening.

Get set up well before you think the elk will show and always keep wind direction in mind. That might mean moving during the middle of the day, or hiking in the dark well before dawn.

This is as difficult as it sounds. November elk are tough animals to hunt, but there are a couple things that can help you out.

The first depends on the weather. If an early winter cold front brings a big snowstorm, elk can be easier to find. Deep snow will force elk to migrate to lower elevations and they’ll often start to bunch up into larger winter herds. During and following these cold fronts, elk will often feed later into the morning and earlier in the afternoon.

Tracking a herd through snow is another possibility that can pay off this time of year. Hunters who stick it out in these conditions are the ones who notch their tags.

The other option requires some mental toughness and physical endurance. If you’re willing to go where other hunters aren’t, you greatly increase your chances of finding where the elk are. This is true no matter what time of year you are hunting elk on public lands. You’ll probably have to go on long, steep hikes into remote drainages, but the payoff can be worth the effort. 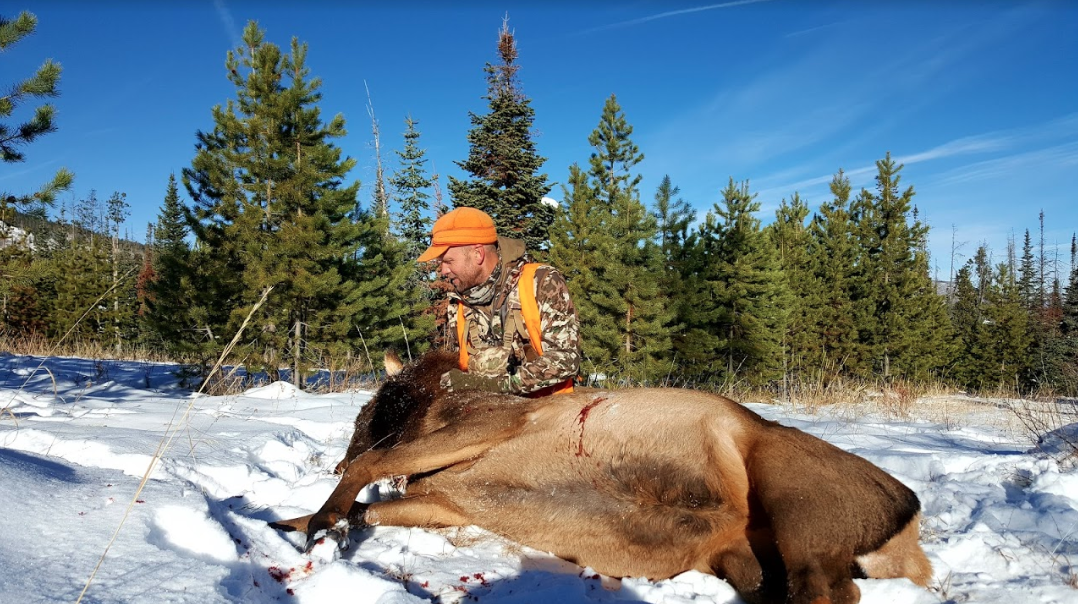 Late Season Hunts
A few states run late season bull hunts, but most December and January tags are limited to cow elk. For hunters that want to fill the freezer, late season cow hunts are a good bet.

During December and January, elk hunting can be both easier and harder than in fall. Snow will likely be deep, which can limit a hunter’s ability to reach distant herds. Or winter could come late and there won’t be enough snow to push elk into open river valleys and sage flats. But, by and large, elk are much easier to locate once they’ve reached their winter ranges.

The advantage of late cow hunts is that they tend to be open for a long time. So, if the elk aren’t down low in an accessible area when the season begins, you can either hunt higher or wait for the right conditions. When you do find elk during late season, you tend to find a lot of them. During fall archery and rifle seasons, elk are usually in smaller groups of six to 20 animals. During the winter, a single herd might contain 200 elk.

This can be a blessing and a curse. Big herds can be easier to find, but getting into shooting range is tough with so many eyes, ears and noses to fool. Usually, with some patience and observation, you’ll find that big herds are predictable and approachable.

They tend to feed slowly in one direction and then often bed down out in the open. Study the terrain, use the available cover, play the wind, and your chances of notching your tag will be good. There’s no need to rush if the wind isn’t right or there’s no cover to sneak through. The elk won’t go far, so you’ll have time to wait for the right opportunity.

Big Game ,
Elk ,
Get the latest in your inbox
Our picks for the week’s best hunting, fishing, wild foods, and conservation content.
Big bucks, land management, rut reports, and tips for the whitetail obsessed.
Privacy Policy

Ask any big game hunter who lives in the Rocky Mountains what is their favorite species to hunt and...

Ask any big game hunter who lives in the Rocky Mountains what is their favorite species to hunt and... 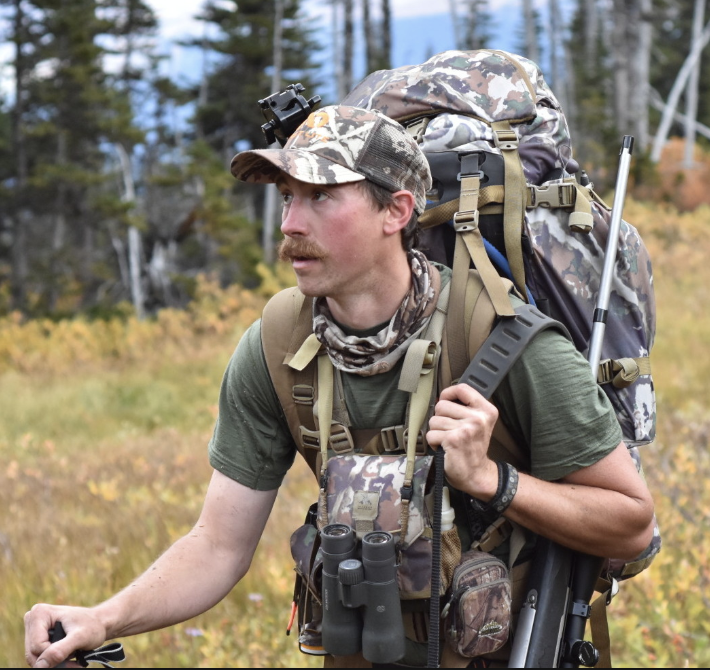 For the third time that morning, I caught wind of it: a sour, slightly sweet odor beneath the dust...

For the third time that morning, I caught wind of it: a sour, slightly sweet odor beneath the dust...