Ask any big game hunter who lives in the Rocky Mountains what is their favorite species to hunt and you’re likely to hear “elk” as the answer. For many American hunters though, elk aren’t available in their backyard. A do-it-yourself elk hunt is an aspirational, bucket-list trip for a  lot of sportsmen and women.

Chasing these big cervids on public lands is often considered the pinnacle of big game hunting in North America, which is why we always get people asking us how to plan a DIY elk hunt. That’s a big question, and one that we’ll try to answer in a series of articles.

The first question any prospective elk hunter needs to answer is where to go. There are plenty of states to choose from that offer great elk hunting. Some states aggressively manage their elk herds for trophy bulls but hunting opportunities for non-residents are severely limited. Other states manage their elk herds to provide ample opportunity with plenty of public lands hunting and over-the-counter elk tags. In the middle of this spectrum are states where tags aren’t sold over-the-counter but they do offer attainable tags and big bulls. Here are the four best options for hunters interested in going on their first do-it-yourself elk hunt. 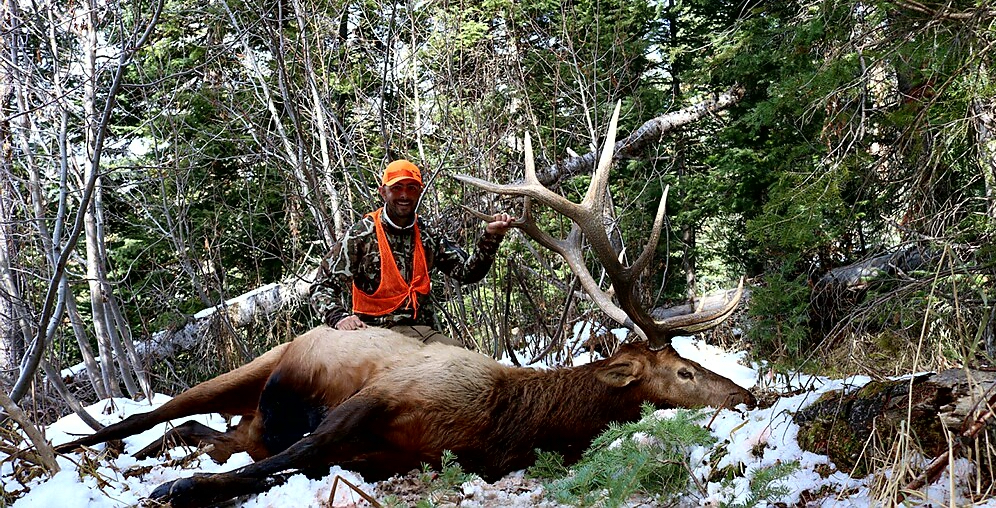 Colorado
Colorado is often at the top of the list for beginner elk hunters. The state has more elk than any other, with more than 280,000 animals. Colorado sells either sex and cow-only archery tags over the counter. For rifle hunters, bull tags can be purchased over the counter for the state’s second and third rifle seasons.

Both over-the-counter archery season either-sex tags and rifle season bull tags can be used to hunt many of the state’s game management units. Rifle season cow tags for specific units can be easily drawn or purchased from the leftover tag pool. Public lands access is excellent as well.

Idaho
Idaho also sells archery and rifle tags over the counter. These general licenses allow hunters to pursue elk in many areas of the state, with the exception of some controlled draw areas. Rumors of wolves decimating the state’s elk numbers are largely exaggerated and most of Idaho’s elk herds are growing. Over two-thirds of Idaho is accessible public land, so elk and elk hunters have plenty of room to roam here.

Wyoming
Non-residents who want to hunt elk in Wyoming need to apply for a general elk tag, which is not guaranteed every season.There’s a cap on the number of general non-resident elk tags made available in Wyoming each year. The general elk tag is valid during archery (with a purchase of an archery stamp) and rifle seasons in multiple units throughout the state.

Demand often outpaces supply, so drawing this tag may require applicants to have a preference point. Points can be purchased the calendar year before Wyoming’s application period opens in January. This might seem like a hassle, but Wyoming consistently boasts the highest elk hunter success rates in the West, often doubling success rates of Colorado or Montana.

Be aware that federally designated wilderness areas are off-limits to DIY non-resident hunters in Wyoming; non-residents guided by a licensed outfitter can hunt wilderness areas. Despite this limitation, there’s still plenty of excellent public lands hunting available. Non-residents need to apply for their elk tag by the end of January each year.

Montana
Similar to Wyoming, non-residents must apply for a general elk tag in Montana. Tag numbers are limited but in some years, unsold general elk tags can be purchased over the counter after the drawing period has ended.

Montana has it all for DIY elk hunters. Elk are doing well there, with herd numbers over objective in much of the state. The general elk tag is valid throughout much of the state during a six-week archery season and five-week rifle season. The state is also known for big public lands bulls. Montana’s application period ends on March 15.

Finding Elk
You can’t go wrong by choosing any of these states for your first elk hunt. Once you’ve decided on a state, the real research begins.

Your research should start on the state’s fish and game website. Look for hunter success rates and harvest statistic trends for specific units. You should also research population trends for individual elk herds. You can even find elk summer and winter ranges and migration routes. All of this information will help you narrow down a few areas as possible hunting destinations.

Once you’ve got a few spots you’re interested in, the next step is researching access. Most DIY elk hunters focus on public lands. Private land elk hunting opportunities are limited in the West and often require hiring an outfitter or paying a significant trespass fee.

All across the West, elk can be found on vast expanses of Forest Service and Bureau of Land Management ground, as well as state managed wildlife areas. Additional elk hunting opportunities can be found where private landowners allow public access through collaborative arrangements with state wildlife management agencies.

After you’ve nailed down some access points and established that there are elk to be hunted in those areas, you’ll want to get more detailed in your research. Preseason scouting begins by understanding the terrain you’ll be hunting and locating specific drainages, canyons and ridges where you’re most likely to find elk. Paper maps are great to start with, but digital tools like the OnX app are invaluable aids for elk hunters. You can search for roadless areas that elk use during hunting season and get a quality view of the terrain and cover where you’ll be hunting.

Some of the best local intel you can get comes from state wildlife biologists. A phone call to the state fish and game agency will put you in touch with the biologist who is responsible for the management of the elk herd you’ll be hunting. It’s your job to ask them the right questions. They won’t point you to an exact location to hunt, but they’ll give you general, valuable information such as which drainages hold elk at certain times of the year.

Game wardens can be another useful source of information, but keep in mind they’re very busy and their job is first and foremost to enforce hunting and fishing regulations, not to divulge hunting spots. If possible, do some networking to talk to folks who’ve hunted your selected area. You can find some useful information on hunting forums, but you’ll have to weed through a lot of bullshit and smokescreens to get it.

You need to do all of this well in advance of your hunt, and it’s just the first step in the elk hunt planning process.

Save this product
Phelps
"UNLEASHED" Elk Bugle Tube
$41.99
The wait is over!!! The unleashed bugle tube is here and ready to rip.
Save this product
Phelps
METAL Bugle Tube
$62.99
Want to be the loudest elk in the woods? Check out Phelps METAL bugle tube and locate a bull anywhere.
Save this product
Phelps
AMP Elk Diaphram Calls
When we need to cow talk as well as mimic intruding satellite bulls, you’ll find us using these calls.
Get the latest in your inbox
Subscribe to our newsletters to receive regular emails with hand-picked content, gear recommendations, and special deals.
Our picks for the week's best content and gear
For the whitetail obsessed, with Mark Kenyon
Redefining our connection to food, with Danielle Prewett
Your one-stop for everything waterfowl, with Sean Weaver
Get out on the water with the MeatEater Fishing crew
Technical hunting apparel
Purpose-built accessories for hunting and fishing
Quality elk, turkey, waterfowl, and deer calls
Privacy Policy

We recently published an article that addressed the question of where to go on your first elk hunt. Many of you have also asked which month you should go on your first elk hunt. In Western states, elk seasons can run anywhere from August to January. When you go will have a big impact on your style of hunting as tactics change from one week to the next. For instance, calling works very well during the rut, but it may not work at all once rifle...

On this hunt, Steve teams up with friend and hunting guide Remi Warren for a late-season quest for bull elk in Montana. They’re both carrying tags but finding a bull in the steep, snow-covered mountains of western Montana isn’t going to be easy. They’ll have to put in some long days and a lot of miles in rough country. But the elk are there and with some hard work, the two hunters eventually find what they’re looking for. And in the end, some...