Most anglers compete with carnivores from the comfortable position of a boat and the only life at risk is that of the fish. But spearfishing takes the thrill of “chase or be chased” to a whole new level. Few places are more dangerous for duking it out with predators than underwater—if not for the lack of home field advantage, then for the ferocity with which some creatures of the deep are willing to fight to get what they want. Just ask Alex Dodds. Dodds, 25, was spearfishing for baldchin gropers with his friend Brodie Paino near the Beagle Islands off the coast of Western Australia on June 21 when a 12-foot great white shark entered the arena. Dodds was up at the surface and Paino was scanning the lower demersal zone when he suddenly shot up towards Dodds, scaring him. The monster shark followed closely behind Paino.

“I only had two to three meters of space to react,” Dodds told MeatEater. “He rocketed up with the biggest jaws I’ve ever seen in my life—so many teeth. For two to three seconds everything was completely silent, and then he just whacked me. He came straight up underneath me and grabbed my leg, and that’s when all my senses came alive. I was just like, holy shit. He threw me up out of the water, then came down to the right of me and smacked his tail, and then I didn’t know where he went.”

When the shark clamped onto Dodds’ right foot and lower leg, it tore an 8-inch gash under his knee and left other massive lacerations around his foot and ankle. Amidst the chaos, Paino launched into action and jabbed the shark with his speargun. Dodds believes he helped scare it away, an act of heroism he’s convinced saved his life. Dodds also believes he poked the shark with his own speargun at some point during the encounter. Even though the shark had disappeared, the two spearfishermen had a 30-yard swim back to the boat before they were safe. “It was the longest 10 to 15 seconds of my life,” Dodds said.

One emergency reconstructive surgery and over 100 stitches later, Dodds is recovering back home in Perth. He became emotional while rehashing the experience, particularly the minutes leading up to the attack. 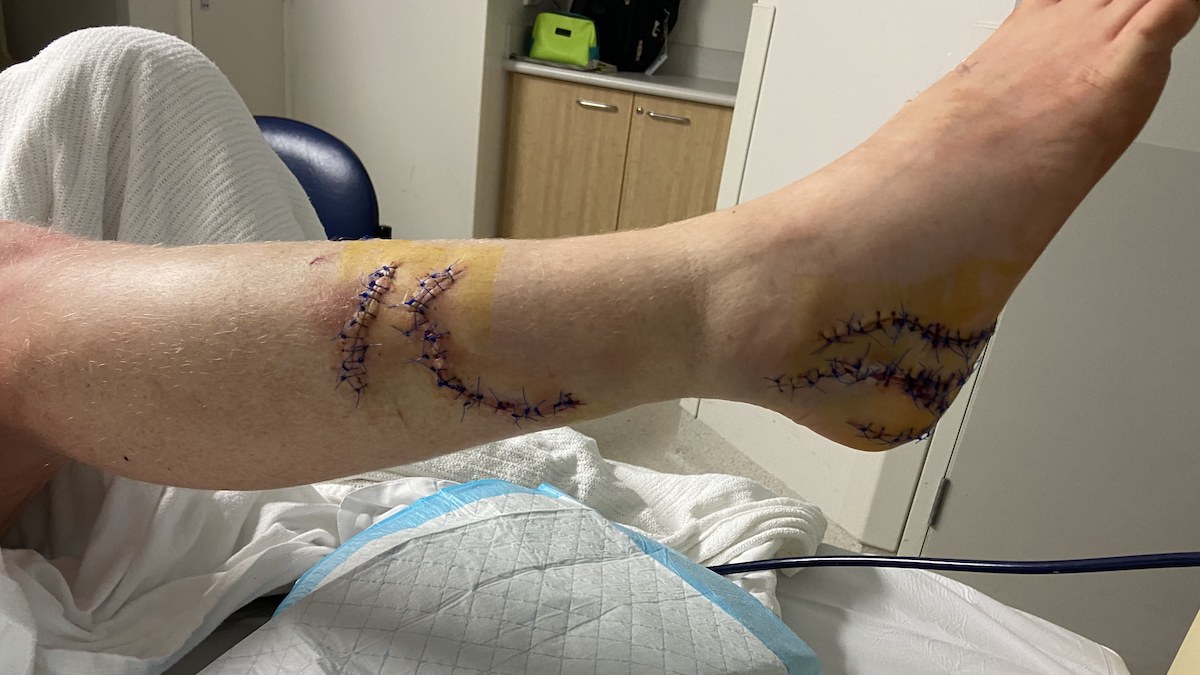 “I was just dangling off the boat for five minutes while my mate was getting his wetsuit ready, and now thinking back on that, I’m like f***. I’m just imagining this thing hunting me,” Dodds said.

The two best friends have been spearfishing for about five years. While they absolutely love the sport, Dodds thinks it might be a little while before he’s ready to return to the water.

“I reckon it will take some time to go diving back in that spot again. I definitely won’t be rushing back to those islands anytime soon,” Dodds said. “[Western Australia] waters are so sketchy. There are so many sharks around, especially great whites—but we love it so much. I reckon I’ll get back in the water eventually.” Shark attacks are spiking in Australia as more people crowd shorelines and push out to more remote parts of the ocean. Western Australia has taken the biggest hit so far this year; according to data from the Taronga Conservation Society’s Australian Shark Attack File, six of the 12 recorded shark attacks in Australia have happened on the western side. Dodds is joined on that list by a 10-year-old boy who was bitten in the foot while snorkeling near Coral Bay and 27 year-old Jackson Howson, another spearfisherman, who was attacked in the same area, among others.

“Looking back, I’m just stoked to be alive,” Dodds said. “I don’t hold any anger towards the sharks. If anything, I think I’m just more intrigued by them as creatures now.”

Save this product
13 Fishing
Kalon O Blackout Spinning Reel
$79.99
At home both in open water and in the frozen tundra, 13 Fishing Kalon O Spinning Reels are performance-proven and tested by the most rugged and rowdy anglers we know.
Save this product
YETI
MeatEater Branded Yeti Hopper M30
$299.99
Whether you're into suds, brewskis, seltzers, or vino, if it comes in a can or bottle and is best served cold, the Hopper M30 is the ticket.
Save this product
Spiceology
Mermaid's Trident Zesty Seafood Blend
$9.99
A bright citrus-based blend that is balanced with earthy notes of smokey chardonnay and mild heat to round it out. This unique combination is incredibly versatile, perfectly pairs with your latest catch, fresh garden veggies, or atop roasted potatoes.
Save this product
13 Fishing
Inception Baitcast Reel
$120.00
A lightweight body and super low-profile design provide incredible comfort during long days on the water.
Save this product
13 Fishing
Omen Black Spinning Rod
$130.00
Japanese 36 Ton Toray Graphite , 4A Portuguese Cork Handle, ALPS 316 Stainless Steel Guides with Zirconia Inserts.
Save this product
YETI
LoadOut GoBox 30
The MeatEater crew uses our GoBoxes for storing all kinds of gear, from ammo and range hardware to outdoor kitchen essentials, dog accessories, fishing tackle, and gear, camera equipment, truck tools, and medical supplies. Why buy expensive hunting and outdoor gear only to store it in a cheap plastic bin with a lid that doesn't fit correctly? Elevate your gear protection and organization with this waterproof, dustproof, shockproof, and critter...
Get the latest in your inbox
Subscribe to our newsletters to receive regular emails with hand-picked content, gear recommendations, and special deals.
Our picks for the week's best content and gear
For the whitetail obsessed, with Mark Kenyon
Redefining our connection to food, with Danielle Prewett
Your one-stop for everything waterfowl, with Sean Weaver
Get out on the water with the MeatEater Fishing crew
Technical hunting apparel
Purpose-built accessories for hunting and fishing
Quality elk, turkey, waterfowl, and deer calls
Privacy Policy

Dodging the Taxman: Keep Your Catch Clear of Sharks, 'Cudas, Pike, and More

Line is peeling off the reel, but with one last violent pull, the fight dies out. A lifeless weight ensues, and what remains on the hook is merely stolen and shredded dreams. The taxman strikes again. Ernest Hemingway had his ways of dealing with sharks, included a Tommy Gun for a couple well-placed shots while compensating for water refraction—something his “old man” Santiago was deprived of at sea. Modern anglers are left leaning over the...

Why do we consider some fish iconic and others aquatic refuse? In this series, we focus on American fishes not officially designated as “game fish.” These species, though native, get lumped into a category of “trash fish,” a distinction that’s more than just semantic. Game fish are managed differently by state and federal agencies. They get protection, research, money, and love. Trash fish don’t. We think that’s wrong. Trash Fish Tuesday...