Photos: Florida Man Attacked by Shark After Bite from Gator

Justin Stuller is well on his way to some kind of Floridian grand slam. After enduring a nasty alligator bite a decade ago, he was bitten by a large lemon shark earlier this month. What comes after that? Barracuda? Burmese python? Wild boar?

Stuller, guide and owner of Estero River Outfitters, took his family down to the Keys for a short lobster season. On the second day, right after they reached their lobster limit, he noticed a hogfish with its guts hanging out floating near the boat. He figured it had been speared and lost by another fisherman, so he went to the boat and checked to see if it was big enough to keep. It was half an inch short of the minimum size, so he threw it back in the water. But then he realized his family was still in the water.

“So, I jumped in, took the fish, dove down to the bottom, went about 25 yards or so, and stuck it in a hole,” Stuller told MeatEater. “And as I was coming back up to the surface about 20 feet from there, I just got rolled. At first I thought I got hit by a boat.”

He didn’t see the shark coming but saw it swim away, identifying it as a lemon of about 8 or 10 feet in length: “I’m a charter captain. I’m on the water a lot. I’ve caught a bunch of sharks and it was definitely a big one.”

Most of the rest of the group were already back in the boat but he grabbed his niece and brought her in with him. Only then did he realize he’d been bitten.

“It laid me open pretty good. Directly behind my knee you can see a perfect bite pattern of the teeth. You could probably put a couple fingers in there,” Stuller said. “Twenty-four stitches and a bunch of Steri-Strips later, and, well, they did a great job. It didn’t get anything important, just meat. So, it was about as good as a bad situation could go.” 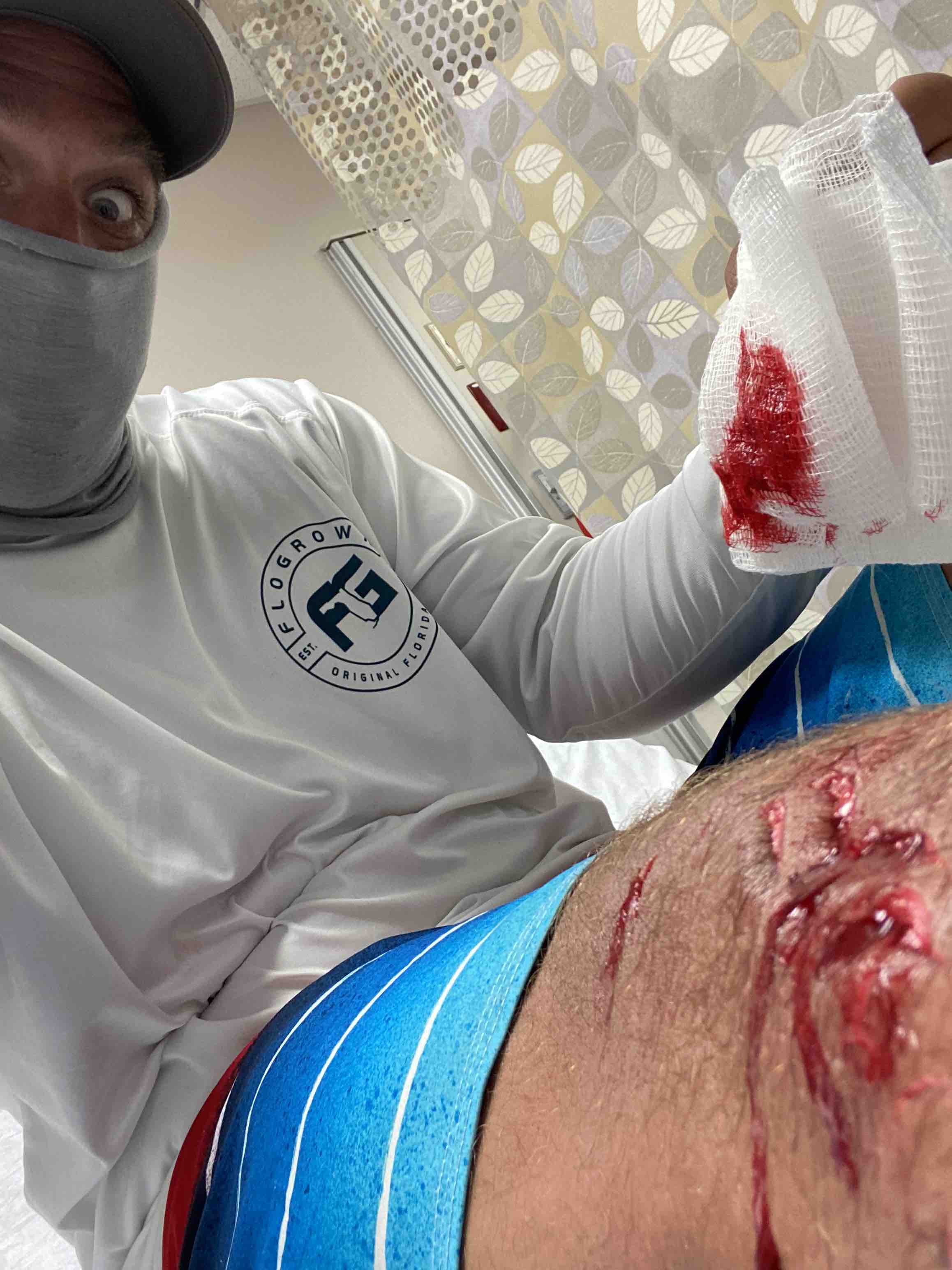 Stuller maintains that he made the right choice by getting the bleeding hogfish away from the children, while acknowledging that the decision put his life in danger.

“I got no ill will towards the shark over the whole thing,” he said. “You know, it was kind of probably a little silly on my part as well, but you know, what are you going to do in that case?” 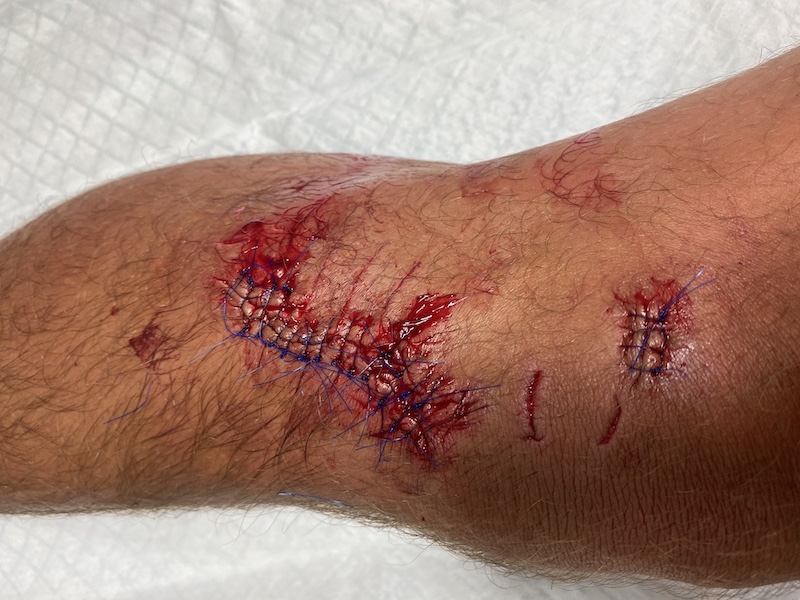 After a quick trip to the hospital, Stuller was back in action. It’s not like this was his first brush with a large, toothy predator, after all.

“I’m outdoorsman all the way. I take advantage of the things that the state gives us, alligator permits and deer permits and things like that,” Stuller said.

In 2010, he received two Lee County alligator permits. With little public land available, he and two friends wound up hunting gators in a roadside ditch near Lehigh. They shot an 8-foot gator with their bow and also got a harpoon in it, but things got a little rowdy as they tried to extract the reptile from the water.

“As we were pulling it up to the bank, those guys kind of got wrapped up ’cause they were trying to keep the strings straight and stuff,” Stuller said. “And I went down to kind of just take care of the gator. I got to the bottom and realized the bang stick is at the top, the knife’s at the top. I’m like, well, it’s not that big of a gator. It was pretty worn out. So, I was holding the gator by the snout and kind of started to back up the bank there. And as I got to the top about two thirds of the way up the gator decided he didn’t want to go up anymore and kind of put the brakes on, went into a roll and like clamped on my upper thigh, on my left leg and kinda like clamped real hard and then pushed really hard. And then it pushed me out of the way and ran right past me back down in the water. So I got two tight strings across me to an alligator, and I just got bit by an alligator. So now I’m like, what do I do now?”

His two buddies reacted quickly and were able to untangle the lines and finish off the gator. They didn’t believe him when he said he’d been bitten, that is, until he showed them his leg.

“They’re like, ‘there’s no way you got bit.’ And I’m like, ‘no, I’m serious,’” he recalled. “Within an hour my whole thigh was black and blue and a couple little teeth marks in there. No hospital thing but it got pretty infected pretty quick, like 24-hour turnaround. It was turning colors so I ended up taking a bunch of antibiotics and everything was good after that.”

From these two incidents a decade apart, Stuller has become a de facto expert on wildlife bites. He says there’s one piece of gear hunters and anglers should never leave behind.

Stuller may be winning the race to the Florida wildlife bite grand slam, but he’s ready to quit while he’s ahead (or behind). Although these experiences taught him and others valuable lessons, they aren’t about to keep him from hunting and fishing Florida’s wild places. 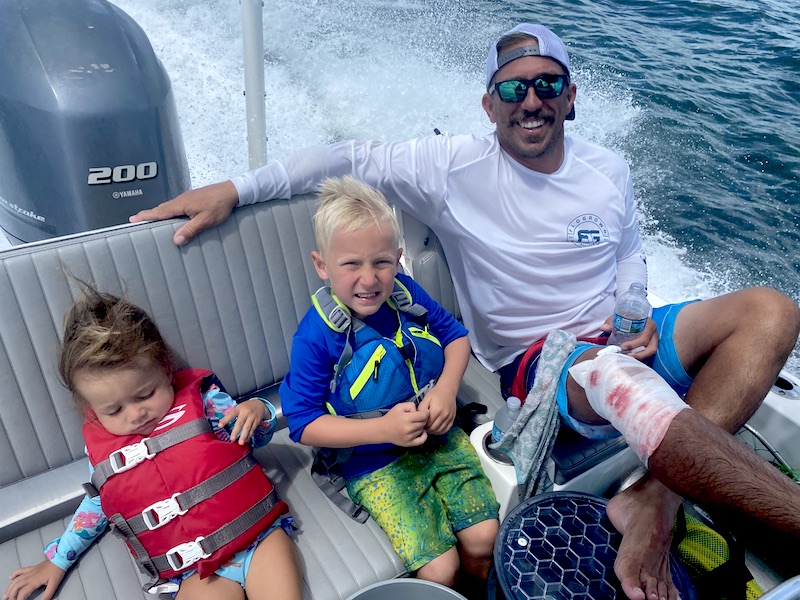 Warning this article contains graphic images. Hunting and fishing often come with the lurking threat of a predator encounter. Many hunters might argue that the thrill of a secondary position on the food chain supplements the thrill of chase, and some of the wildest hunting stories have nothing to do with the hunter pursuing the animal and everything to do with the animal pursuing the hunter. Most anglers compete with carnivores from the...

A Florida man is currently recovering from a major health scare after a minor fishing accident. Mike Walton, a Gulf Coast native, was fishing offshore last month when he pricked himself with a fishing hook. Walton has been salt water angling for over 40 years, so he thought nothing of it and simply removed the lure, as he’s done many times before. Back on shore later that day, Walton’s palm began to swell and throb uncomfortably. He went to a...