The four-wheeler groaned and plowed, tossing snow into the air as we hauled into the enveloping dawn fog. The skin on my face and ears screamed during the ride across the lake, nerves lighting up the registry of pain.

I’ve felt this pain before, working cattle in blowing Kansas snowstorms on the family farm. One of my hands pressed the insulated hood against my ear while the other held down the Pelican case, ensuring my camera gear didn’t launch out the back of the four-wheeler. This sort of suck felt familiar, but there were no cows in sight. It was my first time out on the hardwater in search of winter filets. 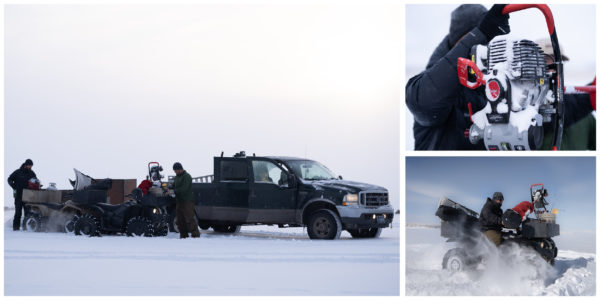 After a long ride weaving in and out of agony, a red tent came into view. Our friends set up on the ice before us to lock in their previously scouted honey hole. Tires squeaked to a stop and my windbreak, known as Miles, and I jumped off the rig and laughed. Wild-eyed Rick, who’d broken trail, blurred in a blend of caffeine, polar vortex brain freeze and adrenaline as he went to work.

Rick quickly drilled holes in the ice. Soon after, the shelter was up and the propane heater was pumping. We shed our jackets, set up the chairs and started putting together jigging rigs, ice holes at our toes. The flasher flickered it’s foreign language of colored bars. This was my first exposure to hardwater and I peppered our pro, Rick, with questions. “How thick does the ice need to be for safe fishing? What is the necessary gear? What lure? What depth?” 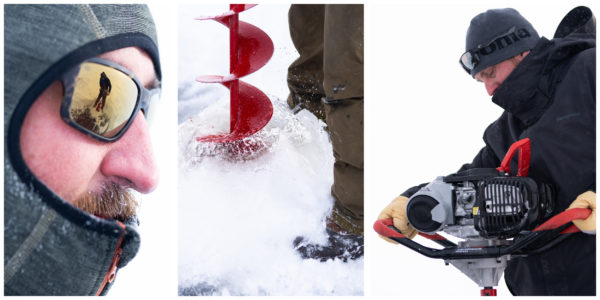 I couldn’t help but laugh at myself. I hadn’t the slightest clue about ice fishing or the biological profile of our intended quarry. I just knew yellow perch were damn tasty, and I wanted some. Common knowledge states that ice fishing is often a code word for guy time and a boozing mission. While that’s all good in my book, I needed to understand the intricacies of hardwater perch fishing. My competitive brain is wired this way. Rick and Miles sustained my curiosity by answering my rapid-fire questions.

Our three ice holes were spaced a foot apart. We tipped chartreuse Hali Jigs and Perch Talkers with red maggots. Red is critical in this reservoir because the primary food source for perch is bloodworm larvae that live in the substrate. An hour up the road, on a different reservoir that’s part of this same river system, it’s all about the natural, gray maggots, because the primary forage there are aquatic sowbugs.

As our jigs descended, the flasher placed behind the middle hole broadcasted flickers of movement. This portable sonar unit uses a submerged transducer to send signals to the lake bottom. Colored bars represent what’s happening beneath the ice and give anglers a window into an otherwise unseen world. A circular screen readout showed the depth and consistency of the lake bottom, and alerted us to the presence of nearby fish. I’d never seen a flasher before and was startled bit its capacity to mesmerize grown men. We waited eagerly, willing the red flickers that indicated the presence of fish. 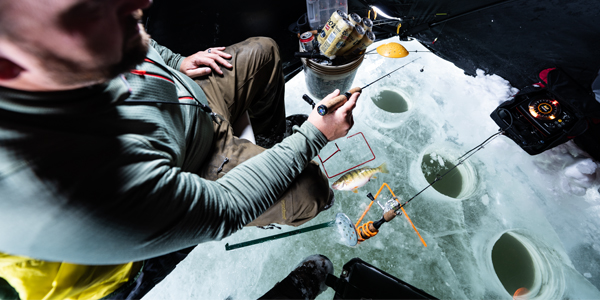 Perch roam the bottom seeking food. The dark stripes on their flanks offer camouflage, kind of like zebras, to protect from ambush predators. Natural bottom contours channel their movement. Ridges, drop-offs, weed lines or, in this case, an old river bed left over from a previous century before this reservoir existed, are key locations to target. That’s where we found perch feeding through the early morning hours. The early bird gets the perch that gets the maggot.

When the quiet times hit, we stayed busy, attaching a 2-ounce weight to a snap swivel and violently bouncing it a dozen times on the bottom. The weight kicked up clouds of dirt and debris, a tactic that can sometimes attract wary perch, even when they’re not actively feeding.

Perch takes are subtle, I discovered. A frigid winter environment causes the ectothermic life below to move with the speed of molasses. Perch can be picky and adept at removing bait from hook without getting stuck. The inevitable missed strikes elicited expletives and jovial jibes and our shelter filled with as much laughter as it did body heat.

With each passing school, at least one of us usually hooked up, reeling the fat, pre-spawn panfish up through circular portals in the ice. Miles made quick work of each catch. He scooped them up and delivered the coup de grâce with the blunt side of a blade. Many anglers simply remove the hook and toss the fish on the ice, leaving them to suffocate and freeze. I appreciated the quick ending Miles delivered. 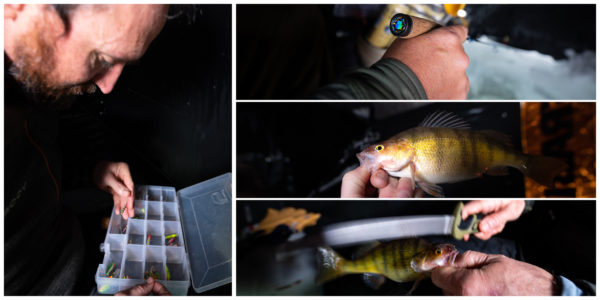 Action ebbed and flowed throughout the morning as schools of perch came and went. When the clock struck noon, the bite tapered off. We landed a final trio of large, mature fish and called it a day. A blade would soon run by the spine and ribs to remove the firm white flesh of the pile of perch we accrued. Riding back to the truck on the frozen four-wheeler, the promise of salty, beer-battered perch filets tempered the cold and made me certain I’d return for another mission.

Not a bad first exposure to this masochistic method of fishing.