This time of year can be a tough stretch for hunters and anglers in northern states. Big game seasons are over, small game and waterfowl seasons are winding down, and we’re months away from gobbling turkeys and open water fishing. Spanning this stretch of the coldest, darkest months is ice fishing season.

“Ice fishing has a PR problem,” according to Steve Rinella.

It’s certainly a pastime rife with hyperbolic stereotypes of lazy drunkards staring at a hole in the ice. Author and poet Jim Harrison famously described ice fishing as the “moronic sport.” Harrison was a bit of a fly fishing snob, but I’ll admit there was a time when all I had to say about ice fishing was, compared to float fishing a river or wading a saltwater flat, it was boring as hell.

Fast forward several years: I’ve learned to love ice fishing. With just a little knowledge and experience, it’s something anyone can have fun doing. While ice fishing is extremely popular in the upper Midwest, a lot more folks could be fending off cabin fever while stacking up some fresh fish.

If you live in the northern half of the country, chances are you’re already very close to some good ice fishing. Everything from small farm ponds to man-made urban reservoirs to giant natural lakes offer ice fishing opportunities for all kinds of edible fish. The most common species targeted by ice fishermen include sunfish, crappie, yellow perch, walleye, northern pike and trout. In some places, anglers can expect to catch less common species like whitefish, burbot and kokanee salmon. 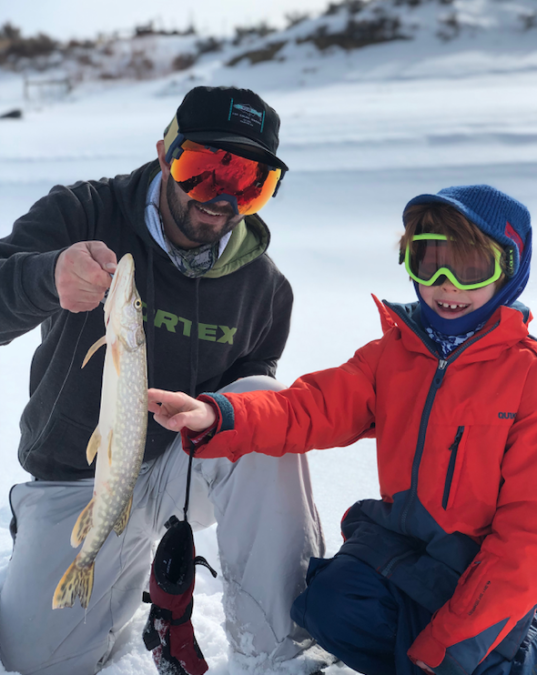 Ice Fishing Safety
There’s no such thing as completely safe ice. Ice melts and cracks and has varying degrees of strength and stability. When you see pictures of entire ice fishing “towns” with hundreds of shanties, plowed roads and pickup trucks driving around on the ice, it’s easy to forget that ice fishing comes with some degree of danger, although the risk is pretty low if anglers use common sense.

Never ice fish over moving water. Clear, solid ice is always stronger than white, flaky ice. Four inches of clear ice is considered safe to walk on and 6 inches of good ice will support an ATV or snowmobile. If you’re interested in driving your truck on the hard water, there needs to be well over a foot of solid ice. Remember, snow is an insulator and the ice may be slushy or thin if it’s blanketed in snow.

Always get an ice conditions report from local bait shops or the fish and game office before heading out. It’s not a bad idea to wear a life jacket, and anglers should always carry ice safety spikes  as a safety precaution against the ice breaking. Also, pack some extra warm clothes in case you get wet.

Ice Fishing Gear
The good news is that you don’t need a bunch of expensive, specialized equipment to go ice fishing. If you’re an open water angler, you already have a lot of the gear you’ll need and, if not, you can get outfitted very easily.

Standard spinning reels work on short ice fishing rods, which usually run 2 to 3 feet long. A basic selection of bait hooks, lead weights, jig heads, soft-plastic jig bodies and metal spoons will cover most of your terminal tackle needs. Simple hand-line tip-ups with live bait are popular for large predators like northern pike and walleye. They send up a brightly colored flag when a fish bites.

Next, you’ll need a way to cut holes through the ice. Spud bars are long, heavy, iron bars with a sharp, chiseled tip. They get the job done, but using them will burn some serious calories.

Augers are a better tool. Hand-operated augers work well for cutting holes in ice up to 10 or 12 inches deep, but if you’re going to be cutting a lot of holes through thicker ice, a gas-powered auger is a better choice. They’re not cheap, but they cut through thick ice in seconds.

Sturdy ice fishing sleds are ideal for transporting your fishing gear across the ice. Many anglers will use a couple 5-gallon buckets to store rods and tackle. Rod holders will keep your bait fishing rigs propped up over the hole and an ice scooper is a must for keeping those holes free of slush.

Some luxury items worth towing in your sled include folding camp chairs, a thermos of hot coffee or cocoa, a propane heater and a portable grill for cooking up some wild game on the ice.

Certain items specific to ice fishing will increase your odds of success. Shelters allow anglers to keep fishing even when it’s windy and cold. They range from lightweight pop-up tents to custom shanties decked out with amenities like cooking stoves and heaters.

Fish finders help anglers quickly zero in on hotspots. Small, hand-held sonar units show water depths and mark fish. Hi-tech flashers can signal when a fish is after your bait. I recently purchased a simple sonar unit and I’ve found that the confidence of knowing there’s actually fish below the hole is worth every penny. Some hard-core ice fishermen even use underwater cameras to give them a detailed look at what’s going on below the surface.

Ice Fishing Techniques
Just like fishing other times of the year, the best ice fishing often happens in the low light periods of early morning and late afternoon.

Good fishing with non-stop action might only last an hour or two before turning off completely. If the fishing in a particular area is good but then shuts down, consider moving. Fishing pressure can cause the fish in one spot to move or stop biting. If that happens, try a different area but fish the same depth and type of structure that produced earlier.

Standard baits like minnows, earthworms, meal worms, maggots and salmon eggs will catch a variety of fish. Jigs and flashy metal spoons in a range of sizes and colors will entice everything from hand-sized panfish to 30-pound lake trout. Most ice fishermen double their chances by jigging a lure with one rod while placing a baited setup in a nearby hole.

Success often derives from drilling a lot of holes over different depths. Ice anglers who move from hole to hole jigging as they go can quickly find the correct depth where the fish are holding. Once located, schooling fish like bluegills or walleye can be caught one after another by fishing multiple rods in a small area.

In the winter, most fish tend to orient near the bottom around humps, rock piles, weedbeds or drop-offs. Jig or place your baits near the bottom to start out. Sometimes, schools of fish will suspend above the bottom at random depths as they search for food. Finding and catching these fish requires an electronic fish finder. Without one, you’ll have to rely on experimentation and luck.

Instead of waiting around for warmer weather, give ice fishing a try. It’s easy to do with a group of friends and kids love it. A fresh batch of fried perch or smoked trout will convince you there’s more to it than just staring at a hole.

Save this product
13 Fishing
Tickle Stick Ice Rod
$50.00
Detect ascending and descending strikes to levels never before possible with current ice fishing technology.
Save this product
13 Fishing
FreeFall Ghost Inline Ice Fishing Reel
$75.00
Easy one-handed operation, smooth drag, and the perfect all-around gear ratio for shallow to mid-depth (5-50 ft.) ice fishing.
Save this product
13 Fishing
Omen Ice Rod
$50.00
This series comes equipped to handle anything from panfish to the burliest lakers, gnarly pike, and wily old walleye.
Save this product
13 Fishing
FreeFall Carbon Inline Ice Fishing Reel
$110.00
The revolutionary FreeFall trigger allows hard water anglers to use their flasher, hit specific depths, and get instant hookups by releasing the trigger in the target zone.
Get the latest in your inbox
Subscribe to our newsletters to receive regular emails with hand-picked content, gear recommendations, and special deals.
Our picks for the week's best content and gear
For the whitetail obsessed, with Mark Kenyon
Redefining our connection to food, with Danielle Prewett
Your one-stop for everything waterfowl, with Sean Weaver
Get out on the water with the MeatEater Fishing crew
Technical hunting apparel
Purpose-built accessories for hunting and fishing
Quality elk, turkey, waterfowl, and deer calls
Privacy Policy

When I was a kid learning to ice fish with my friends, it simply wasn't cool to talk about safety. We all wanted to be tough and unafraid while doing an admittedly dangerous activity. In the years since then, however, I've seen and heard about far too many deaths and near-death experiences to be cavalier about driving around and hanging out on giant frozen lakes. Even if you're still too cool to think about safety, maybe think about how great it...

5 Steps to Being Totally Prepared for Ice Fishing

We’ve all seen that guy at the boat launch floating away from the dock with a dead starter battery. The same scenario plays out in a different way when it comes to ice prep—maybe it’s a dead snowmobile or an auger that just won’t start or fishing line that’s seen too much UV. Most of us pile our ice gear in some corner of the garage after the season is over and we don’t see or think about it until it’s too late in the season that follows. Here...

I’m generally old school and like to keep things simple. But the first time I used electronics for ice fishing, I knew I'd never fish without them. There are things you can fight, and then there are things you have to accept because they make a job so much easier you’d be crazy not to utilize them. Here are three trends in ice fishing technology that you should embrace this hard water season. Live Sonar The first question many have is: What the...