In the state perhaps most highly regarded for brown trout, a record has fallen that stood since 1966. At 7:30 p.m. on the night of Wednesday, March 3, Robbie Dockter of Conrad, Montana, landed a 32-pound, 6-ounce fish in the Marias River that will supplant the old record by a full 3 and a half pounds. 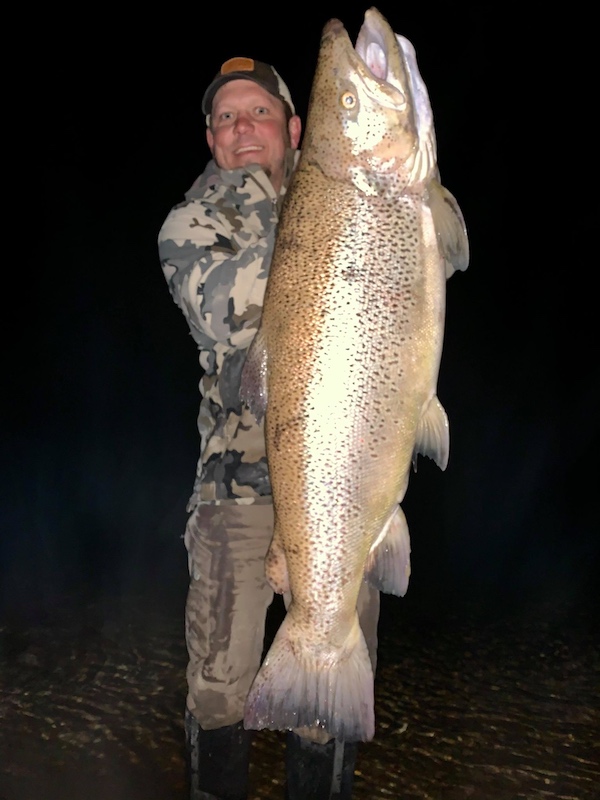 Dockter, a 42-year-old lineman for Sun River Electric, accidentally ran over his cellphone on Wednesday, but provided an interview to MeatEater Thursday night via Facebook Messenger.

Dockter has been fishing with his 13-year-old daughter Sierra, who he calls Sis, her entire life. They’ve developed a tradition of hitting the water together every Wednesday they can. This week was no different. Daughter got out of school, father got off work, the pair headed to the river.

“She is a stud, catches big fish and kills big deer,” Dockter said of his daughter. “She kills bigger bucks than most grown-ups. She lives for ducks.”

They typically fish spoons from the bank from about 5 p.m. until after dark. Dockter self-identifies as “a walleye guy who’s turned into a brown trout guy over the last 10 years.” They stayed a little extra late in the evening, as walleye anglers love to do, and were glad they did. Forty-five minutes after last light, Dockter’s small, brown trout-colored Kastmaster spoon just stopped.

“I thought I had a laker or a buffalo. Just nasty, heavy weight,” Dockter said. That was exacerbated by the fact that he was running only 4-pound-test line. After 15 minutes, they finally saw what they had.

“Then we had it 10 feet from shore and it rolled. That’s when I knew I had something special,” he said. “It just looked like a 15-pound brown giant but then it rolled. It was in Sis and my headlamp and it freaked. It was shocking. She said, ‘Holy shit!’ And she don’t cuss.”

Sierra was holding the net, but Robbie relieved her of duty at the last minute with such a victory on the line.

“I got a video right after I caught it and weighed it,” he said. “I almost cry.”

They took their time getting pictures before taking the 37-inch fish in for official measurements.

“My daughter thought we broke the world record for a bit last night. [She] did all the research on the way home.”

“I knew it was something special so wanted to make it 100% right,” Dockter said. “It bottomed out the scale here in Conrad, so we went to Valier and called the warden to meet us.”

Dockter said from his conversations with Montana officials he expects his fish will be certified as the new state record next week.

The now-former Montana State Record Brown Trout was a 29-pound Wade Lake monster caught by angler E.H. Peck Bacon in 1966. It carried a mystical reverence among angling circles in the Big Sky State, as longstanding records often do. Asked how he felt about topping that high bar, Dockter said he’d never even dreamed so big.

“Well, I’m humbled and honored, and actually still a little in shock,” Dockter said. “I hoped to catch a 10-pound brown someday.” 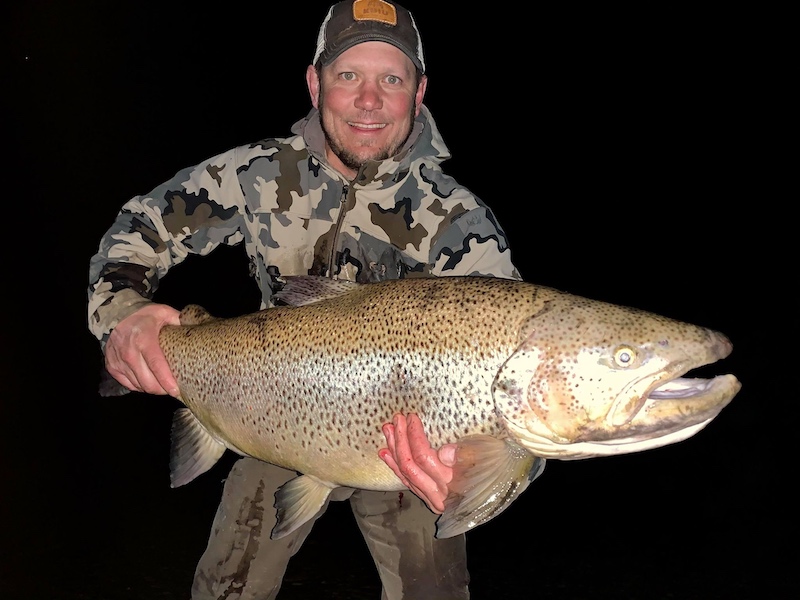 Editor's Note: This article was corrected and updated 11 a.m. Wednesday, Aug. 25. Caroline May Evans is off to an auspicious start of her fishing career. The 4-year-old girl submitted a two-pound golden trout last week for official consideration in the IGFA “Small Fry” record book, which includes records from anglers under 10. According to IGFA’s Angler Recognition Coordinator Zachary Bellapigna, the Evans Family was fishing an unnamed lake in...

On Feb. 17, David Burruss a caught a record-breaking 4-pound, 5-ounce black crappie out of Clear Lake, California. “Normally I don’t stumble for the net when I catch a crappie but today was different,” Burruss posted on his business’ Instagram page, Clear Lake Outdoors. He was having a slow day on the water until catching the giant panfish. “I was heading to a different spot when I noticed three big fish on my new Garmin Panoptix LiveScope. I saw...