If I could choose one pan to cook with for the rest of my life, it would be a cast iron skillet. It is a versatile vessel that can cook almost anything, anywhere. Learning how to work with this metal will improve your cooking at home and in the field.

However, cast iron is only as good as the care you put into it. Like a fine wine, a well-seasoned skillet will improve over time.

One of the main advantages of cast iron is its ability to maintain heat, although it is slow to heat up and cool down. If the heat source is very high, the skillet will remain hot for a long time. This heat retention makes it best for recipes that call for browning, which is why a cast iron skillet is my preferred choice for searing steak.

Another benefit to cast iron is that it is non-stick. A well-cared-for skillet should have multiple layers of oil baked on. This is known as a seasoned pan. 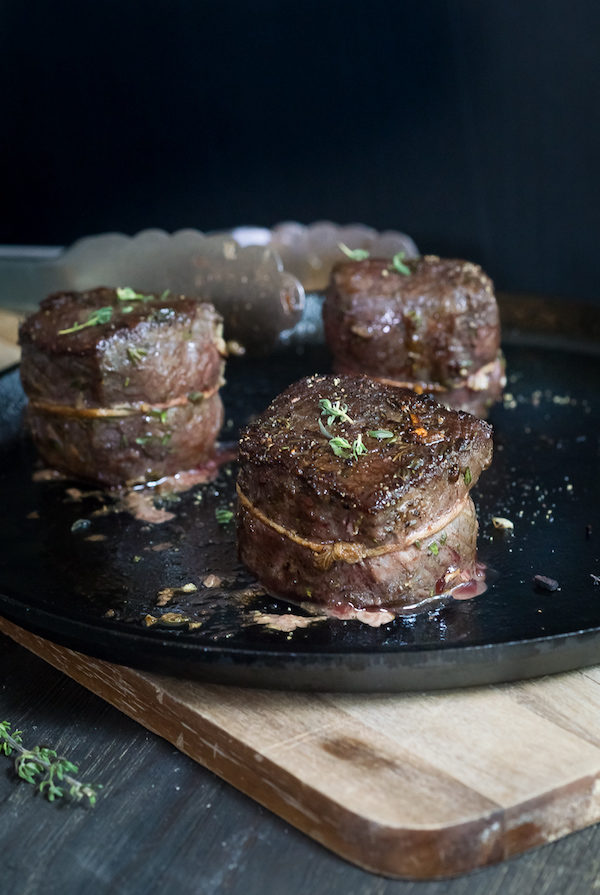 Cast iron has been around for centuries, and yet somehow there are still many misconceptions about how to properly season and clean these implements. For some, the idea of washing cast iron is blasphemy. Using abrasive materials or harsh cleaners can certainly deteriorate the seasoning, but you shouldn’t buy into that myth. I wash my skillets and pots almost every time I use them.

If you’re cooking something relatively dry and straightforward, chances are that there are only a little bit of cracklings left on the bottom to clean. In these situations, you can sprinkle in some kosher salt and wipe the pan.

If there is a significant amount of food stuck to the bottom or around the sides, you should wash it. Sometimes you can get away with water alone, but a small drizzle of natural soap usually helps. Use a gentle bristle brush or sponge to scrub. Using harsh soap or steel wool will strip away and deteriorate the natural seasoning.

If you’re out camping, a simple method is to boil water inside the skillet. This helps release the food stuck on the bottom, and you can scrape it clean with a metal spatula if you don’t have soap or a scrubbing brush.

The most important thing to remember is that you should always season the skillet after each wash. Simply put, this means applying a small amount of oil to the cast iron and then heating until it hardens. When unsaturated fats are heated at high temperatures, a breakdown and oxidization process called polymerization happens. This chemical reaction creates a coating that provides a barrier and will not only protect your pan, but also make the surface non-stick for cooking.

To season, wipe the pan dry after washing. Apply one to two teaspoons of oil, or enough to add a thin layer across the entire pan. It’s best to use unsaturated vegetable oils, such as grapeseed or flaxseed. Use a folded paper towel to wipe down the pan with oil. Be sure to coat the inside, bottom, sides and handle.

To harden the oil, you will need to heat up the pan again. There are two ways of doing this.

To maintain well-seasoned cast iron, I wipe on a small amount of oil and throw the pan on a hot burner for a few minutes to dry out and prevent rust.

If you have a new pan or if an older one starts showing dull, gray spots, you will want to bake on the oil. To do so, place the pan in the oven after oiling and set the heat to 400 degrees. Allow the pan to cook for 30 minutes to an hour then turn the heat off and let it stay in the oven until it is cool to the touch. Have some ventilation in the kitchen while it bakes; the smell can be intense. 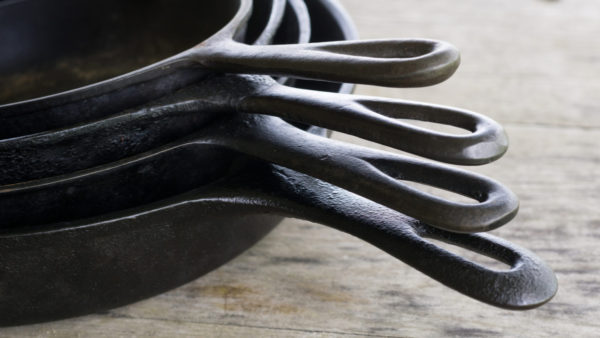 If you have too much oil or if it feels sticky, then it hasn’t baked on long enough. Keep it in the hot oven until it has turned into a hard layer. If the pan comes out looking even grayer, or not shiny black, then you didn’t apply enough oil.

If you’re anything like me, there is a chance you’ve abused your cast irons a time or two. I accidentally left a dutch oven outside one night while out camping. I woke up the next day to find that the morning dew had soaked the pot. Even though I tried to dry it out with paper towels, by the time I got home the damage had been done.

If this has happened to you before, don’t worry. There is no need to get rid of your pan—it can be restored. You can even take beautiful, vintage cast irons that appear ruined and bring them back to life.

To refurbish, soak a steel wool pad in water and squeeze out excess liquid. Scrub the rusty areas of the pan until you get back down to the black base metal. If trying to restore an old piece with a severe amount of rust, you might need to use an electric wire wheel brush for some extra power. Don’t be surprised if it feels greasy. You’re stripping away a lot of old, grimey layers of oil.

Wash out the skillet thoroughly with natural soap and water. Pat very dry and repeat the seasoning process as explained above. You’ll want to apply a layer of oil to the entire skillet and bake upside down. Use foil underneath to catch any oil that might drip. Leave the skillet in the oven for an hour to create a hard, non-stick layer.

At this point, your skillet is like new. You can continue cooking all of your favorite cast iron dishes, like steakhouse goose and venison fajitas.

Save this product
Benchmade
Essential Meatcrafter™️ Knife
$180.00
A hybrid hunting fixed blade with a fine, smooth edge to trim, debone, or slice your preferred cuts of meat. Makes just as much sense in the back of your truck as it does in the kitchen drawer.
Shop Now
Save this product
Meater
Meater+ Bluetooth Thermometer
$99.99
With up to 165 ft Wireless Range, MEATER is the first truly wireless smart meat thermometer.
Shop Now
Save this product
Spiceology
7 Pack Seasonings Gift Pack
$59.99
Bring home the entire Mega Spice Collection and change the way you cook.
Shop Now
Save this product
Penguin Random House
The MeatEater Fish and Game Cookbook
$35.00
The definitive guide to cooking wild game, including fish and fowl, featuring more than 100 new recipes.
Shop Now
Get the latest in your inbox
Subscribe to our newsletters to receive regular emails with hand-picked content, gear recommendations, and special deals.
Our picks for the week's best content and gear
For the whitetail obsessed, with Mark Kenyon
Redefining our connection to food, with Danielle Prewett
Your one-stop for everything waterfowl, with Sean Weaver
Get out on the water with the MeatEater Fishing crew
Technical hunting apparel
Purpose-built accessories for hunting and fishing
Quality elk, turkey, waterfowl, and deer calls
Privacy Policy

The struggle to keep a cast iron pan seasoned is real, so many people simply choose not to deal with it. That’s unfortunate because caring for cookware doesn’t need to be complicated. The simplest and fastest way to season your cast iron cookware is on the stovetop. New cast iron usually comes pre-seasoned, but that isn’t the same as a good mature seasoning. The truth is, seasoning isn’t a one-time deal. A good skillet with years of use will be...

How to Cook Diver Ducks

Diver ducks, migratory waterfowl that feed on fish, mollusks, and aquatic invertebrates, get a lot of praise on the wing but a bad rap at the table. Despite this reputation, hunters sure shoot a hell of a lot of them each season. According to the University of Nebraska-Lincoln, the take of shovelers, scaup, ring-necked ducks, eiders, oldsquaw, scoters, buffleheads, goldeneyes, mergansers, and canvasbacks is well beyond a million birds annually...

A Beginner’s Guide to Sous Vide for Wild Game, Part 1

I still remember the first time I was introduced to sous vide. The old, intimidating industrial models were large devices that looked like something you would see in a science lab. I was so confused by how the contraption worked, specifically when instructed to “place food in bath.” I have since come to realize that sous vide is actually incredibly useful for cooking wild game, especially now that there are small, easy and relatively inexpensive...