On August 8, naturalist tour guide Doug MacCartney and two friends witnessed a truly remarkable sight in a high-alpine bowl south of Yellowstone National Park. The trio was watching a grizzly sow and three cubs feeding in a remote basin in the Teton Wilderness when 13 wolverines suddenly appeared on the slope in hot pursuit of the bears.

Viewing a single wolverine is considered a once-in-a-lifetime phenomenon; witnessing over a dozen in one place is nearly unheard of. MacCartney, a seasoned outdoorsman, recounted his experience in a post to his tour company’s Facebook page, Yellowstone Insight. 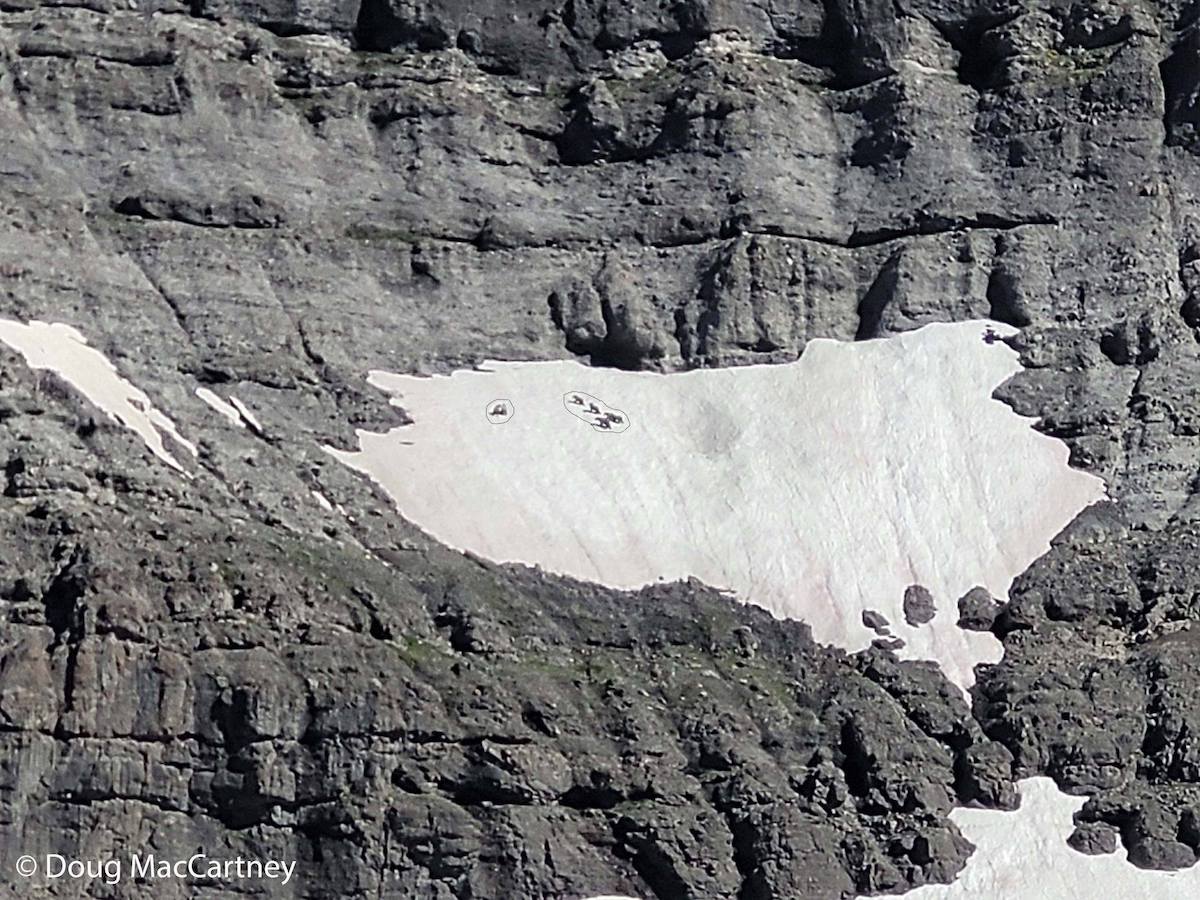 MacCartney was watching the bears feed on the edge of a snowfield for several minutes, a common sight in the Greater Yellowstone Ecosystem where grizzlies make their way to high-alpine talus slopes in August to feed. Their prey is a migratory moth species called Army Cutworm moths, which take late-summer refuge in the boulder-strewn slopes and provide a high-energy food source for bears looking to pack on winter fat stores. Naturalists have observed dozens of bears foraging in a single basin in mid-August, chowing down on the fatty moths that researchers say are calorically akin to eating small pills of oil.

As MacCartney watched the bears, he noticed that they began to run across the snowfield. MacCartney reported that he “looked to see why and noticed a wolverine leaving the top of a big rock going in the bears’ direction.” Upon a second glance, he “spotted another wolverine running toward the bears and then another.”

MacCartney then saw a third group of wolverines, this time a mother and two kits, trailing the bears across the snow.

As the grizzlies fled the basin to escape the wolverines, MacCartney said the pursuers split up and effortlessly navigated a series of cliff bands. “Half of the wolverines continued up the vertical rock face on the right side of the snow field,” he observed. “The rest crossed left on the snowfield and went up the vertical rock face to the left side.” 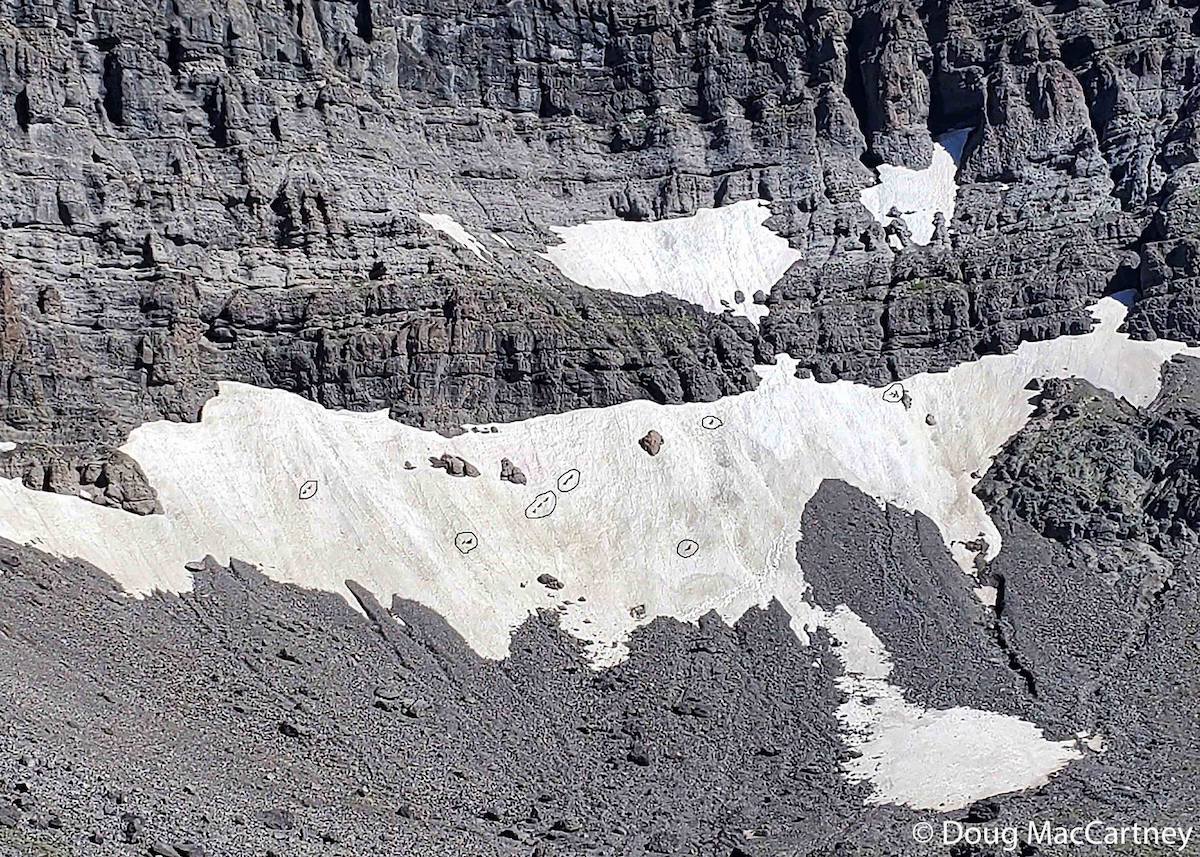 Wolverines are known for their ability to move efficiently across snow and rough terrain—their large paws disperse their body weight, allowing them to cruise on deep snow drifts and rock surfaces alike. Researchers have even observed radio-collared wolverines in the Yellowstone area traveling nearly 150 miles in a week.

In a matter of minutes, the wolverines effortlessly traversed across the bowl. “Some had gained 1,000 feet and were nearing the summit in five or ten minutes before we could no longer follow their movements against the rock face anymore,” MacCartney said.

Fortunately, MacCartney’s hiking partner managed to snap a few pictures with his phone before they disappeared amongst the rocks. In one picture, in which MacCartney circled the groups of animals, you can clearly identify seven distinct clusters. In subsequent photos, the lengthy, low-profile shapes of seven wolverines come into focus as they climb onto a higher snowfield.

After his unique encounter, MacCartney consulted with local wolverine biologist Jeff Copeland to make sense of what he witnessed. Copeland suggested that the wolverines could have been concentrated in the area to feed on the same Army cutworm moths the bears were likely consuming.

It’s also possible that there were animal carcasses in the area, drawing in the wolverines, which exhibit both carnivorous and opportunistic scavenging tendencies. Still, seeing this many in one place is exceedingly rare. The furry mammals are known for their solitude, often occupying home ranges of up to 250 square miles in the Yellowstone area.

Regardless of the reason, MacCartney was witness to a truly miraculous event. “We couldn’t believe what we had just seen,” he concluded. “We were all pumped up and in awe by what we had just witnessed."

There’s a difference between book smart and bar smart. You may not be book smart, but this series can make you seem educated and interesting from a barstool. So, belly up, mix yourself a glass of LMNT Recharge, and take notes as we look at how you could literally get away with murder in Yellowstone. Powered by LMNT. You’ve probably heard of legendary raves at Studio 54 in NYC or benders at the Broken Spoke in Austin. But they can’t match dozens...

A family boated a bit more than they expected during the Alabama Deep Sea Fishing Rodeo on Friday, July 15. April Jones was fishing with her son, husband, and father-in-law, when suddenly she felt something large hit her body. At first she thought it was a wave, she told AL.com. Then Jones turned around and saw a huge, 400-pound spotted eagle ray flopping around in the back of the boat. The spotted eagle ray had launched itself out of the ocean...

I met Dr. Daniel Stahler on a dirt road overlooking the town of Gardiner, Montana, situated right smack on the 45th parallel. Dr. Stahler, a veteran wildlife biologist who first came to the park in 1997 to participate in its wolf program, was about to make a trek into what he calls a “cluster site” in the developing heat of an early July morning. Dr. Stahler was gracious enough to let me tag along on what would be the last such journey of the...