The current flood of the Pearl River has impacted many areas in Southern Mississippi, but for two Mississippi residents, this flooding created the perfect storm to harvest a record-breaking alligator.

The alligator, known as “Yellow 410,” was tagged in 2009 but has eluded hunters for years. Although it is difficult to age alligators, wildlife officials estimate that she was around 75 to 100 years old. Measuring 10 feet and 2 inches, she is now the longest female alligator ever taken in Mississippi.

Two brothers, Jim and Richie Denson, of Madison, Mississippi, made their debut in alligator hunting this season but reported a rough beginning. They described both Friday and Saturday as unsuccessful, but their luck changed on their Sunday hunt. Their day began when Jim's fishing partner called to inform him of an alligator he spotted around the Ross Barnett Reservoir. His fishing partner had never been able to access this backwater lake upriver of Ross Barnett Reservoir. However, flooding from the Pearl River flushed out the vegetation that previously covered it. After receiving this information, Jim got his boat and equipment ready, and he and Richie went to the reservoir for another attempt.

The Denson brothers arrived at the lake an hour after receiving the call. After spotting the alligator, they decided to move closer so they could snag it with their rods and reels. They noted that although they were having issues with their trolling motor making noise, they were able to get within casting distance without spooking the alligator into submerging. Despite these efforts, the anticipation of this moment got the best of them. Jim said they became overexcited, cast too far over the gator, and she disappeared.

More frustration followed as the brothers made an attempt at another gator that appeared soon after the first. Although Jim and Richie both hooked this second alligator, the hooks came loose, tangling their lines in the process. At this point, Jim tells his brother he's ready to quit–but regardless of their frustration, the pair decided to stick it out. Shortly after, the giant alligator appeared again.

Jim hooked the gator this time, but Richie's cast missed. After this, Richie managed to snag the alligator with a hand line, which caused her to become "absolutely crazy," going into a death roll. In the end, Jim secured the alligator with a cable, despite it getting tangled in their lines, rope, and a broken rod.

After their success in capturing the gator, they noticed that it wore a yellow tag. The tags were old, but they could read the number 410. Jim and Richie took the alligator to Red Antler Processing in Yazoo City. There they learned that their alligator was a female that measured over 10 feet, meaning it might become the Mississippi state record for the longest female. 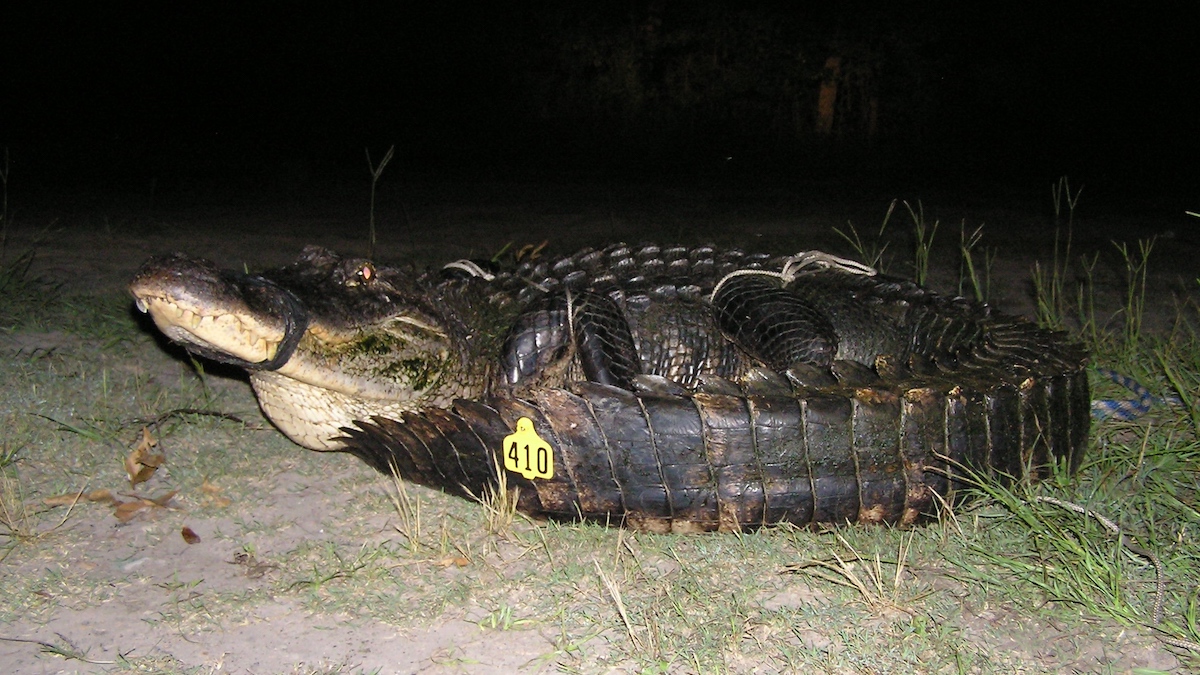 After making this discovery, they called up Mississippi Department of Wildlife, Fisheries, and Parks (MDWFP) Alligator Program coordinator, Ricky Flynt. Flynt was familiar with this particular alligator—he was the one that captured and tagged her over a decade ago as a part of a research project. Her measurement at that time was 10 feet, 2 inches, making her tied for the longest wild female alligator in the world. However, an alligator captured in Florida last year that measured 10 feet and 6.75 inches has now claims the title. Nonetheless, Yellow 410 has become the Mississippi state record for longest female alligator.

According to Flynt, Jim and Richie harvested Yellow 410 within 100 yards of where he initially captured and tagged it. He also noted that females grow slower and are much smaller than males. Based on her current size, Flynt estimates it would take more than 60 years to reach her current 10 feet, 2 inches. Adding that she has maintained that size for the last 13 years provides essential information on her age. Flynt believes this alligator could be 75 to 100 years old.

Currently, there is still much we don't know about wild alligators. Since 2007, more than 800 alligators have been captured and tagged in MDWFP. According to the MDWFP, the research aims to obtain biological measurements and data on locations to learn more about movement patterns and growth rates when the tagged gators are recaptured or killed by hunters. "Each recapture provides us with interesting data that no other states are obtaining,” Flynt said in a press release by MDWFP. “I am very proud of what we are learning."

Hunters and hunting remain an essential part of wildlife conservation. Hunting in tandem with good science is vital for conservation, and this story demonstrates the effectiveness of this system. Without hunters Jim and Richie, scientists may have never received the valuable data on Yellow 410 gained through her harvest.

Colorado officials are searching for an archer accused of poaching a moose in Pike National Forest, just west of Colorado Springs in Teller County. On Sept 18, 2021, Colorado Parks and Wildlife (CPW) received a call from hunters who stumbled upon a moose carcass near a creek. Travis Sauder, an assistant area wildlife manager and lead officer on the case, along with officers Aaron Berscheid and Ben Meier, arrived on the scene to find a dead bull...

What Happened to North America’s Weasels?

The weasel on my office desk has a serpentine body that wraps into a tight coil. It’s perched on a piece of driftwood and has lush chocolate brown fur that melds into a porcelain white belly. It has a cheese wedge head, stubby legs, and a black-tipped tail the length of a butter knife. My old man trapped that weasel in a 110 conibear set on a muskrat run back in the ‘80s. Often, as I write, I catch myself gazing at its beady eyes. Growing up, I’d...

Archaeologists scouring melting glaciers recently discovered an arrow that predates the Vikings. The arrow, estimated to be around 1,500 years old based on the shape of the arrowhead and nock, was uncovered by researchers from Secrets Of The Ice, a glacier archaeology program. Secrets of the Ice is a team of scientists that locate and explore glacial archaeological sites in Innlandet County, Norway. Scientists discovered the ancient arrow nestled...