Last winter, after deciding to press pause on the hunt for Holyfield until 2017, I set my sights on a new target for the coming months. Finding Holyfield’s sheds.

I’d decided to wait another year before trying to put a tag on the old buck, but admittedly I still wanted to wrap my hands around his antlers. I thought that if I could find his sheds – even if I never did end up killing him – I would still be able to have a physical token of this hunt and this deer, some kind of physical connection back to the days and nights in pursuit of and dreaming about this animal. So, just as it was during the 2016 hunt for Holyfield, the 2017 shed hunt became an obsession.

The plan was to keep track of the old buck throughout the winter until I saw that he had shed his antlers and only then dive in to look for them. So my hunt for Holyfield continued, as I watched from afar as Holyfield survived the final days of the 2016 season and then continued to monitor his visits on trail camera and occasional glassing sessions during the postseason. He was still hanging around in early January, but as the month rolled on his visits faded away and he eventually disappeared all together. The surrounding crop fields had been picked clean and my food plots ended up getting flooded during the warm and wet weather we had here in Michigan. It seemed he may have moved on to an area with better winter food. He showed back up briefly in early February, but then disappeared again for the rest of the month, and I decided to pull my trail cameras at the end of February after not having gotten his picture or any other buck for almost four weeks. 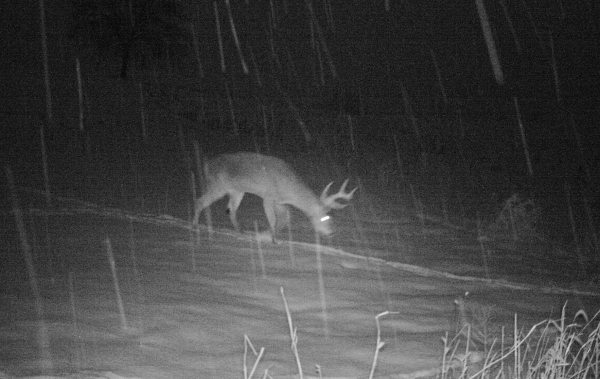 Fast forward to early March and my hopes for finding his antlers had nearly disappeared. But then good luck struck one night while glassing from my usual hilltop perch. I caught a glimpse of a small group of deer heading towards my flooded food plot system – a small half racked buck, a doe, a doe, another doe. Big buck! It was Holyfield. And he was still holding both sides. For the next ten or fifteen minutes I watched as he bumped the other deer around, drank from the pond that once was my plot, and repeatedly shook his head. He’d buck his legs, bounce his head up and down, shake it left and right  and bounce it up and down some more. It was the most bizarre thing I’d ever seen a buck do and I couldn’t help but think it was because he was irritated with whatever was happening atop his head. I honestly thought he might drop his antlers right then and there. I squeezed my binoculars tight to my eyes, hoping I might catch those big beautiful sheds topple to the ground any second, but it never happened.

Still, my gut told me they were going to drop soon and, fortunately for me, he was back in the area. 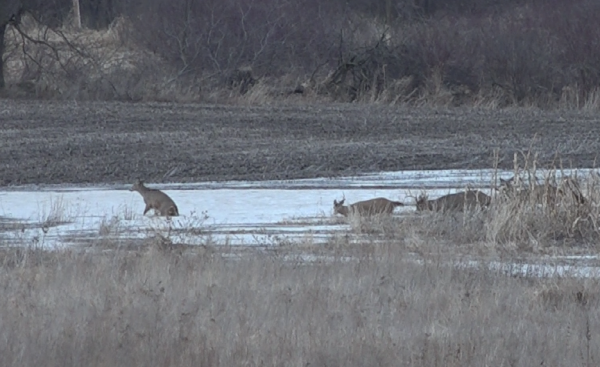 The next day I was headed to Iowa for our long planned group shed hunting trip, but when I returned the next week, the hunt for Holyfield’s sheds was officially on. On the first day of the hunt I recruited my wife to help and our plan was to grid search what I believed to be his #1 bedding area, which also happened to be where I last saw him headed on the antler shaking night. Along with my dog Booner, the two of us grid searched every square inch of the thick cover I thought he might be hanging in, an area of about 13 acres in size. No luck. A day or two later I gridded another 10-15 acre patch. I was focused on thoroughly covering all the best bedding areas and anywhere near potential food sources and later that week I searched another swath of ground and another and another, and each and every time I came up empty. I did end up finding a four year old shed (and that’s a shed that’s been sitting on the ground for four years, not a shed from a four year old buck) that came from a buck I’d been hunting in 2012 and 2013 called Leaner. But no Holyfield.

A few days later though, after finishing up a family obligation and having just a couple hours of daylight left on a Sunday night, I decided to sneak out for a quick walk. I wanted to check an intriguing section I hadn’t walked yet in March. The best stretch of this section I figured would be the brushy finger of timber and grass that extended out in between a cut corn field on one side and cut beans on the other. It looked killer and as I slowly worked my way along the edge of the tall grass my eye caught a glimpse of a bright white pearl aimed right at me. I froze and my stomach heaved – if you’ve ever shed hunted, you know that feeling when your brain registers the shape or color it’s been desperately searching for. I yanked up my binoculars, hoping beyond hope that this was in fact a shed and with just a moments glance I could tell it was. And a big one too. Holyfield’s shed? 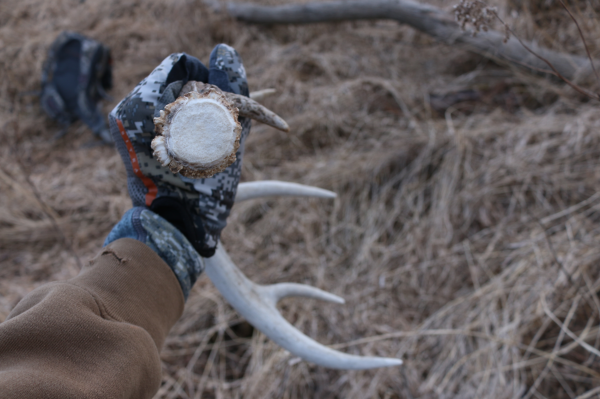 I dropped my glass, hollered at my dog and 50 quick steps later I stood over top the biggest shed I’d ever come across in Michigan. But it was not his antler. It was a five point 57 4/8″ side from a different buck, a deer I’d gotten on camera just once the previous year. 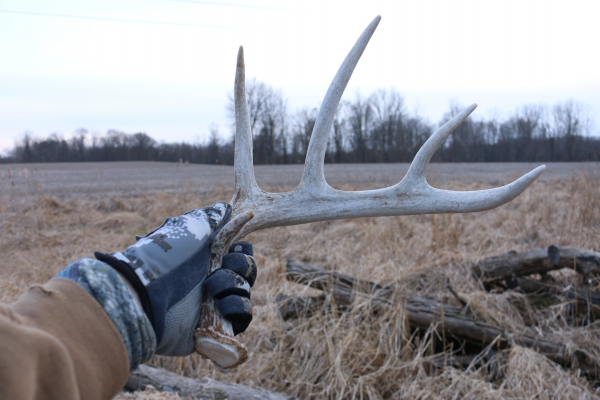 And since then I haven’t found a single other shed, let alone the two sheds I’ve really wanted. I’ve continued to walk other less likely spots and even re-walked a few areas I checked earlier in March. I’d gotten permission to walk several different properties around where I hunted Holyfield and I’ve walked all those too.  All told, I’ve walked more in Michigan this year than I have ever before – but to no avail.

Unfortunately, time is running out. March is nearly past, spring green up is quickly approaching, and much of my free time now is having to be spent on last-minute renovations to our camper that we’ll be taking on the road soon for another extended out of state trip. I’m still hoping to try a few more times, but I’m running out of likely spots to search. And with every passing day now I’m coming more to terms with the fact that my shed finding opportunities might very nearly be gone.

So yet again, it’s looking like Holyfield has bested me. And given our history,  should I really have expected any different?

By Mark Kenyon Last week I found a shed off the buck I call Holyfield for the first time in the four years I’ve been following him. Not only was this the first time I’d held one of his sheds, but it was also the moment I realized he had survived the 2017 season. Here’s a quick look at that moment.

I’ve been hunting Holyfield – a Michigan buck- for three years now. You might have heard. And now, in what I hope will be his final year running around this property and in my head, I’m trying to take my level of analysis – you might call it patterning or planning – up a notch. If you’re hoping to analyze or pattern a mature buck yourself, you might be able to learn something by studying my own example below. Because of the level of hunting...

How to Be a More Efficient Shed Hunter

The best and worst shed hunting advice I ever received was, “just keep walking.” There’s a beautiful simplicity (and truth) to that maxim, but also dangerous deceit. When I first began searching for shed antlers, I took this approach to heart and simply walked. As most beginning shed hunters do, I blindly traversed every square inch of every property I had access to. On occasion, I’d actually find an antler and it was a great rush. But the more...