Other than my early season trip to Montana, my 2017 whitetail season has been pretty uneventful. As detailed in past content like the “Hoping for Holyfield” video and the “How To Pattern A Mature Buck” case study article, my hunt for Holyfield this year has largely been a waiting game. After hunting for him on opening night, I’ve stayed out of his area completely – waiting for either some sign of daylight movement OR for the October 24/25 period when he historically starts to move on my section during daylight (I had a shot at him on Oct 25 in 2015 and Oct 24 in 2016 in the same area).

Well there’s been no daylight movement that I’ve observed or captured on camera, but now October 24th is here, and not only that, but a cold front has arrived (and if you believe the “Red Moon Theory,” tonight is supposed to be good too.) So once this front appeared on the forecast, my plan has to been to start hunting this evening in whichever one of the four stands/blinds in Holyfield’s core area that could be hunted with the given wind. With the SW wind we have tonight, only one of those spots is an option.

And oh by the way, he posed for a nice picture right in the area this morning, a couple hours before daylight. 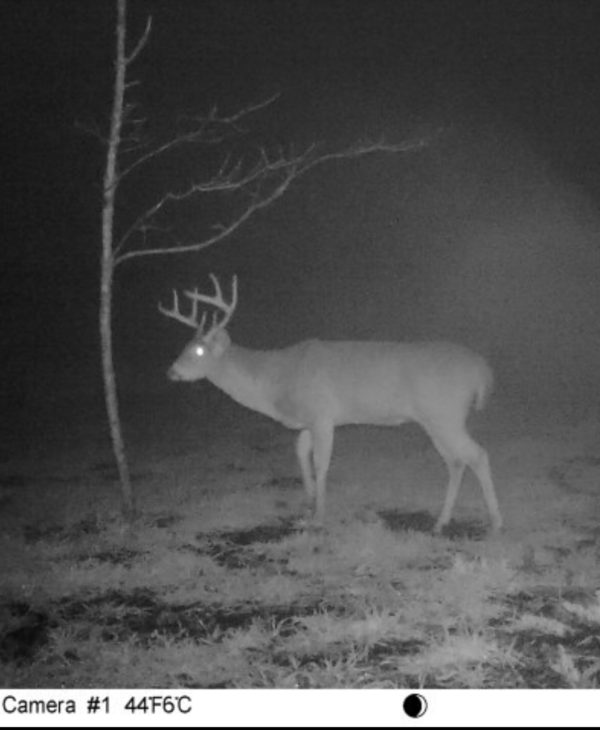 But now a new wrinkle has been thrown into the decision-making process. It now appears that winds tonight will be staying somewhat strong throughout the evening – 14-16 mph – and a steady rain will be picking up right around the last couple hours of daylight. I’ve never viewed wind or rain as a deal-breaker for deer movement, but when it gets real heavy, I begin to worry. The conditions I’m seeing predicted are right around that threshold. So the question now becomes this; do I still hunt tonight to take advantage of the first evening after the cold front and the annual pattern that has shown him active around this time? Or, do I sit out tonight’s hunt and wait til tomorrow when the wind and rain clear out?

The risk of going in tonight is that he might not move in daylight, given the slightly less-than-ideal wind/rain conditions, and if I go in and happen to spook some deer, that could negatively impact my chances at him in the future. The risk of not hunting tonight is that the great weather/history/moon may induce him to move out in daylight and present a rarely offered shot, and I’ll be kicked back drinking a beer in the house instead of watching him at 30 yards.

I still don’t have an answer, but soon I’ll have to make a decision.

You can follow along on the Wired To Hunt Instagram and Facebook page today, tomorrow and through the rest of the week to see how things end up going.

From here on out, the hunt for Holyfield is on.

By Mark Kenyon Only 10 minutes into my 2017 season,  the first rush of hunting-induced adrenaline surged through my veins. It was last Friday, in southern Montana, and I was headed out for my first ever pronghorn hunt. I filled my pack with a day’s worth of water, snacks and gear, grabbed my Halon 32 and started up a steep golden hill of grass. The landscape ahead of me was a patchwork of state and BLM public land, and when I came over the rise...

By Mark Kenyon In this weeks video blog I’m recapping my first half of October hunts in Michigan, my evolving plan for hunting Holyfield and my most recent trail camera pull! Check it out below.

By Mark Kenyon This week in our #WiredToHuntWeekly video we’re taking a look back at extended footage of my encounters with my #1 Michigan buck in 2016, Holyfield. No sign of him yet this year, but my fingers are still crossed. Just a few more months …