How to Choose the Right Turkey Load

There was a time when all my turkey, small game, waterfowl and upland shot shells were 2 ¾-inch, #6 lead, 12-gauge field loads. Since then, shotgun loads for all game species, including wild turkeys, have come a long way. These days, turkey loads come in a vast array of configurations, many of which kill gobblers more effectively and at longer ranges than the ammo that used to be available.

In the past, turkey hunters like the great Colonel Tom Kelly regularly killed wily boss gobblers with run-of-the-mill lead game loads. Those guys deserve some serious credit. Compared to what is available today, the ammunition they used had some considerable limitations. With lighter, underpowered loads of soft lead pellets shot out of a 12-gauge shotgun with a full choke, 30 yards was the maximum range for a lethal shot on a turkey.

When lead shot was banned nationwide for waterfowl hunting in 1991, non-toxic steel shot was the answer, but steel is much lighter than lead and lacks lead shot’s killing power and range. These problems led to the commercial manufacture of non-toxic tungsten shot, which is heavier than lead. Eventually, tungsten shot crossed over from waterfowl hunting to turkey hunting.

Turkey Chokes
Specialized “super-full” turkey chokes were also developed to constrict pellet loads into tighter patterns than what can be achieved with standard full chokes. A tighter pattern puts more pellets into a turkey’s head and neck.

While turkey chokes do offer the advantage of sending more pellets into smaller areas at longer ranges, hunters need to be aware of one disadvantage. The extremely tight pattern they create makes missing turkeys easier, especially at close range. 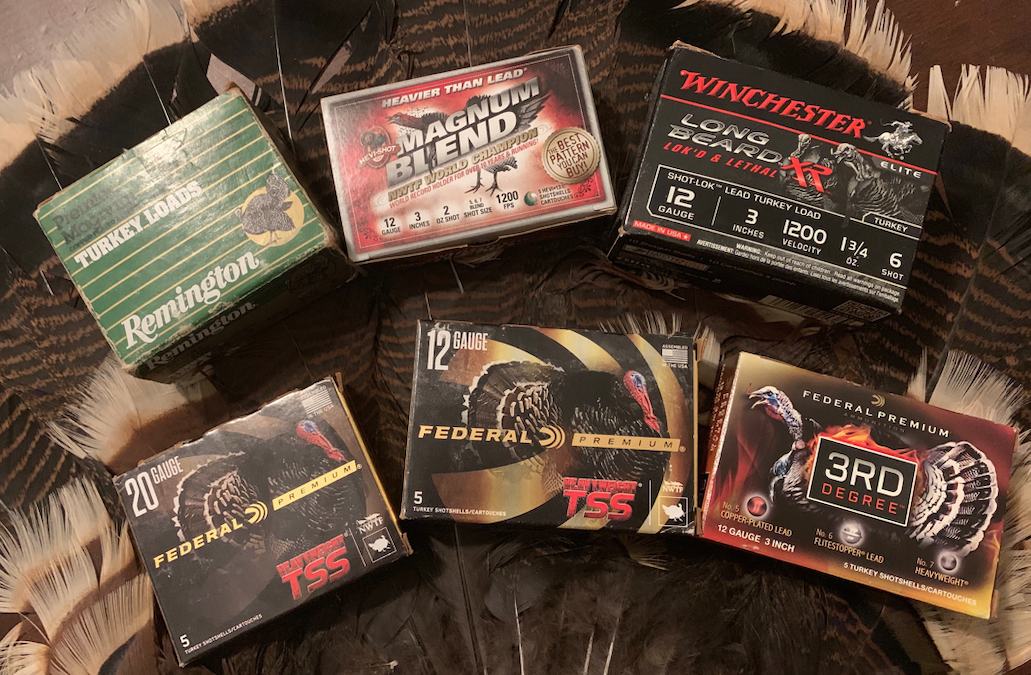 Lead Turkey Loads
Hunters still kill thousands of gobblers every year with lead turkey loads, but magnum loads of copper-coated pellets are a better choice. But hunters often argue over the ideal lead shot size for turkeys. Some believe the weight and size of large #4 pellets provides more killing power, while others feel because there are more pellets in a load of smaller #6 that more of those pellets will end up in a turkey’s neck and head.

A good compromise is #5 copper-plated lead pellets loaded in a 12-gauge 3-inch magnum shot shell. With this setup, you’ll be good out to 40 yards, and perhaps 50 if your gun is patterned tight. If you want better range and lethality, you’ll need to consider using tungsten shot. 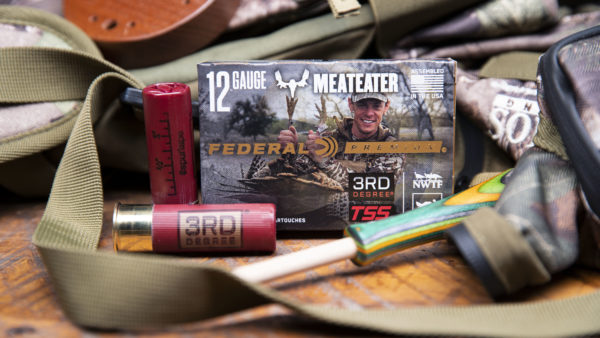 Tungsten Turkey Loads
Based on personal experience, I’m a firm believer in the advantages of tungsten, and there is a lot of data to back me up. Tungsten is much denser and heavier than lead—a #7 tungsten pellet weighs more than a much larger #5 lead pellet. Smaller, heavier pellets penetrate better than larger, lighter ones, and they carry more energy further down range. More pellets result in a denser pattern and more hits in the vital zone. The end result is that hunters can shoot turkeys at longer distances with more killing power than lead.

Federal Ammunition has developed a new premium tungsten turkey load that uses tiny #9 pellets, which gives hunters a shot payload with many more pellets than a load of #6 lead. Their #7 tungsten load offers a similar advantage over #5 lead, and it meets minimum turkey hunting shot size regulations that are enforced in some states, such as Colorado.

Tungsten loads are by far a better choice than lead for turkey hunters, including those who balk at the substantial recoil of a 12-gauge 3 ½-inch magnum load pushing 2 ounces of lead pellets. Those giant, shoulder-punishing 3 ½–inch shells simply aren’t necessary. A standard 2 ¾-inch or 3-inch magnum tungsten load is more than enough for killing turkeys out past 50 yards. Additionally, the advantages of tungsten shells make 20-gauge shotguns indisputably effective turkey killers.

Historically, many hunters believed the 20-gauge was inadequate for turkeys, but with tungsten loads, it is a great choice for kids, women or any hunter who wants to carry a lighter shotgun.

These premium shells come at a cost, though. A box of five tungsten turkey loads will set you back two or three times the price of 10 lead turkey loads. I would have hard time justifying that expense if I was waterfowl or pheasant hunting, since most hunters go through more shells in one duck hunt than an entire turkey season. A single box of tungsten turkey shells, however, should be enough to kill a few gobblers—especially if you pattern your shotgun before the season starts.

Patterning a Shotgun
Before you hit the turkey woods, you should pattern your weapon to make sure it’s shooting where you’re aiming. This is just as important as sighting in your big game rifle. All shotguns are different, and some might pattern several inches high, low, left or right.

First, set up a large target at 25-30 yards from a steady rest. Next, aim and shoot for the bullseye with a light game load. The pattern of your pellets should surround the bullseye equally on all sides. Once you’ve established you’ve got a good pattern, repeat the shot on a new target with your turkey load. The patterning results should be similar, which means you’re ready to hunt.

If your gun is not patterning on target after a few shots, try using a different turkey load. Changing ammunition may result in a better pattern. If not, and you are using the factory-installed, single front bead for a sight, consider adding some type of adjustable sight to your shotgun. Rifle-style iron sights, fiber optic sights, peep sights, red dots and scopes are all good options. With any of these systems, a simple adjustment will quickly correct any accuracy problems and you’ll be ready to put your tag on a rope-dragging gobbler.

Save this product
Phelps
MeatEater X Phelps Box Turkey Call
$87.99
This box pairs a beautiful purpleheart lid with a solid walnut body designed for creating raspy old hen sounds that will pull a wily old tom right into your lap.
Save this product
Phelps
MeatEater X Phelps Slate Over Glass Turkey Pot Call
$87.99
When it comes to versatile, out-of-the box performance, it’s hard to beat a good slate call.
Save this product
Phelps
MeatEater X Phelps Turkey Call 3 Pack Diaphragm
$34.99
A killer 3-pack including Steve Rinella's signature Jake Brake, Janis Putelis' signature Latvian Eagle and The MeatEater Loud & Clear.
Save this product
First Lite
Phantom 3D Balaclava
$30.00
Used in conjunction with the Phantom Leafy Top, this balaclava takes your concealment to the next level in the turkey woods.
Get the latest in your inbox
Subscribe to our newsletters to receive regular emails with hand-picked content, gear recommendations, and special deals.
Our picks for the week's best content and gear
For the whitetail obsessed, with Mark Kenyon
Redefining our connection to food, with Danielle Prewett
Your one-stop for everything waterfowl, with Sean Weaver
Get out on the water with the MeatEater Fishing crew
Technical hunting apparel
Purpose-built accessories for hunting and fishing
Quality elk, turkey, waterfowl, and deer calls
Privacy Policy

Now more than ever, having realistic turkey decoys is critical. “There’s been an education curve out there for these birds today,” veteran turkey hunter and MeatEater contributor Tony Peterson said. “We’ve killed off a lot of the dumb ones.” With most of those “dumb” birds gone, we’re left hunting their smarter (or at least more discerning) brethren. This means decoy realism is of critical importance in many common scenarios. “If you’re run-and...

If you want to increase your decoy effectiveness this spring, consider what the real turkeys are doing. A 30,000-foot-view explanation is that flocks start out as big as they’ll be all season and shrink to smaller groups as spring progresses. This means that multiple decoys are a solid choice on Day One, but you’ll probably only want a single hen deke by the last week of the season. The space between offers a moving target for decoy choice and...

How to Reap a Turkey

The beauty of spring turkey hunting is that success can be achieved through multiple hunting styles. You can run-and-gun with a shotgun or set up shop in a hub-style blind with your bow. You can crawl around and bushwhack them, or put out a whole spread of decoys and only take the safety off when a gobbler struts in to put on a show. Or you can reap. Reaping is the act of crawling into a longbeard’s guard and popping up a fan or a decoy built...