How to Identify, Avoid and Treat Poison Ivy

The single greatest downside to hunting, in my eyes, is the frequency in which this activity puts me in close contact with poison ivy. Damn I loathe that stuff, and I think my hatred is justified.

A poison ivy breakout once swelled one of my eyes shut so tight that I couldn’t see out of it and had to miss three days of work. Another time, after a poison ivy rash spread to unmentionable parts of my body, I found myself unable to sleep and forced to take cold showers in the middle of the night for temporary relief. A later case of poison ivy was so bad it required a trip to urgent care and a steroid shot in my butt cheek. In the heart of hunting season last October, a lapse in attention led to a poison ivy rash getting blistered so badly around my mouth that I couldn’t eat solid food for days and had to go on a series of medications to combat infection.

The only thing that keeps fueling our encounters is my love of chasing turkeys in the spring, scouting in the summer and hunting out of trees in the fall. No amount of itching or oozing will keep me out of the woods. That being the case, I’ve had to learn how to deal with poison ivy.

Or, maybe if you’re part of the 15% of people who are immune to poison ivy, then none of this applies to you. In that case, consider yourself lucky.

Identifying Poison Ivy
The best way to avoid poison ivy is by knowing what it looks like. This is not as easy as it sounds, as the plant can come in many varieties, shapes and sizes. In addition to the Eastern variety of poison ivy that most hunters are familiar with, there is also a Western version, as well as poison oak and sumac to worry about. Those ranges extend across most of the country.

Eastern poison ivy, which I come into contact with on most of my hunts, is best identified by looking at its leaves. There will be three almond-shaped leaves coming from one stem, with a series of jagged edges pointing towards the leaf’s narrowest end. Poison ivy can be found growing on the ground or as a vine crawling up a tree—so be wary at all times.

Take some time to review plenty of photos online to make sure you’re clear on what the plant looks like. Once you’ve done that, the best way to avoid a nasty rash is to simply be careful and avoid touching a poison ivy plant. 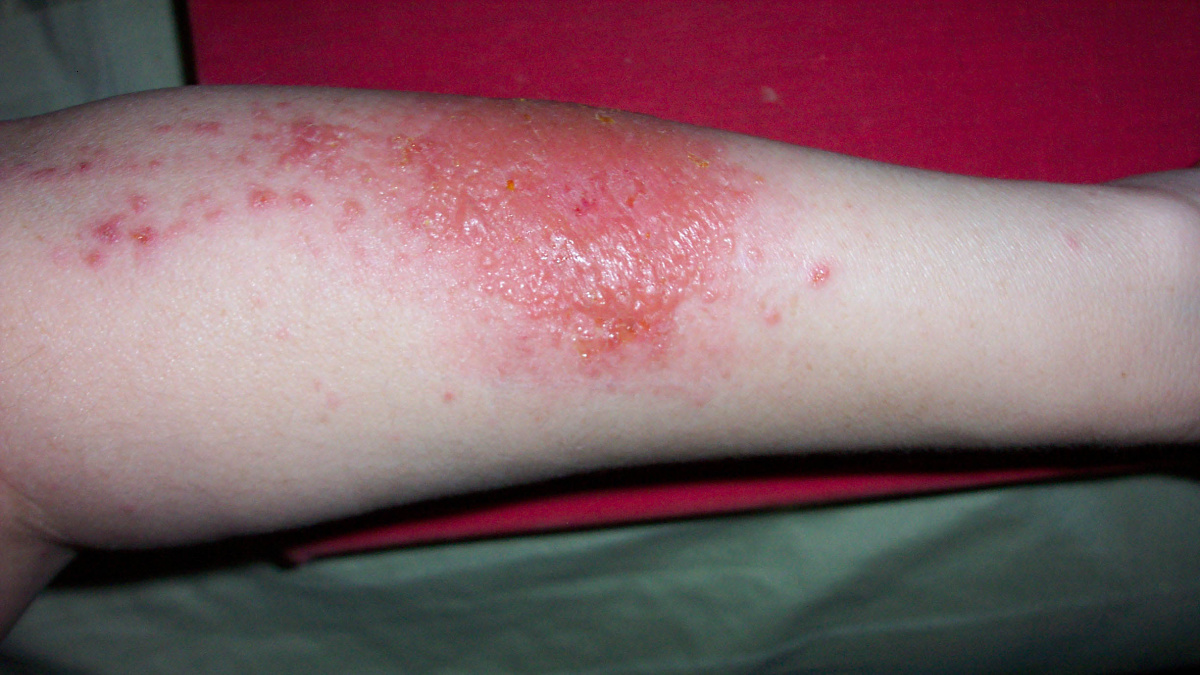 Pre-Treatment
When spending time in proximity to poison ivy, regardless of if I come in contact with it, I take several defensive measures to ensure I don’t get a rash. First, if I’m at all worried that I might have touched a plant, I do my best to avoid touching any other exposed skin. Scratching your nose, eyes or arms is a great way to spread the irritant, uroshiol oil, across your body. Once I leave the woods, I wash my hands with soap and water at the first opportunity. I don’t expect this to remove all of the rash-causing oil, but it’s a good stop-gap measure to help reduce the spread until I get home.

Once at home, I’ll remove and wash any clothing that might have come into contact with the plant. Next, I take a cool shower and wash off all potential contact areas with a special soap called Tecnu. Tecnu is specially formulated to remove the itch-inducing uroshiol oil and I’ve had great luck with it. If I bathe with Tecnu within about 8-10 hours of ivy contact, I feel very confident I’ll avoid having a breakout. I’ve seen other washes such as Zanfel and Mean Green Scrub recommended as well.

I have also heard from some that extremely rigorous scrubbing with soap, cool water and a rough cloth can remove the uroshiol oil, and that poison ivy-specific washes are not necessary. This may be true, but given how miserable a poison ivy rash can be, I’d rather stack every possible card in my favor.

Treatment
If you’ve done all the above and still contract a rash, the next thing to consider is how to treat it. A poison ivy rash will typically appear one to two days after contact in the form of small bumps on your skin. Sometimes the rash will be in isolated patches or in long lines.

If the rash is particularly severe, it may also eventually grow from itchy bumps to oozing welts. No matter what stage your rash is in, it’s important to not rub or scratch the sores. The more you irritate the rash, the more likely it is to break the skin and become susceptible to infection. I can tell you from experience, you do not want your poison ivy itch to become infected.

There are a series of different treatments that can help reduce the symptoms and discomfort of poison ivy, many of which act to dry out the rash and shorten its lifespan. The Mayo Clinic recommends corticosteroid creams, calamine lotion, oatmeal-based bath products and cool wet compresses. Of these options, I’ve used Caladryl—a topical treatment made from calamine—and found it to be helpful in the short term for easing the itchiness of the rash.

If the rash gets so extreme that you can’t work or sleep, or starts consistently oozing yellow liquid, it’s time to visit a doctor. I’ve had to do this multiple times, and after each instance I regretted not going to the doctor sooner. Upon diagnosing your poison ivy break out, a medical professional can either give you a shot or prescribe an oral treatment such as prednisone. I’ve been treated with both and have seen nearly miraculous results.

Be Careful
I love being in the woods. I love hunting. I despise poison ivy.

Unfortunately, it’s often difficult to enjoy the first two without encountering the last. Luckily, with the steps I’ve described above, you can dramatically reduce the risk of poison ivy and spend more time enjoying your outdoor adventures.

This minimalist style chest rig is compact and designed to be worn high on your chest keeping it easily accessible and extremely versatile.

These have become one of Steve’s favorite hunting pants. They’re comfortable and tough and stand up to hard backcountry use.

On a dark winter night in 1994, my best friend’s uncle taught me how to skin a raccoon using a short rope, two green sticks, and a knife. He emphasized getting green sticks just the right size and not cutting too shallow around the ears and eyes. He didn’t refer to it this way, but the method he used is called case or tube skinning. It requires one main cut from the back of the heel to the anus and then to the back of the opposite heel. The...

How to Hunt Late Winter Cottontails

Cottontail hunting is consistently underrated. The practice has declined in popularity over the years, and I can’t see why—it’s exciting, accessible, inexpensive, and offers some of the best table fare you can find in the woods. And while popular practice and opinion may say differently, one person who definitely agrees with me is Kevin Murphy. As a veteran guest of MeatEater’s Netflix series, including an episode featured in Part 2 of Season 1...

Video: How to Make a Raccoon Baculum Toothpick

It seems like every southern state has adopted the raccoon baculum as their own. You may have heard it called the "Texas Toothpick," "Arkansas Toothpick," or "(insert your favorite state) Toothpick." Regardless of where it originated, the curved penis bone of the raccoon is one of the most unique bones in the mammal kingdom. Native Americans used the bone to pack pipes for smoking. People use them ornamentally as necklaces. If you have a set...