Typha is a Linnaean genus containing some 30 species of rhizomatous semi-aquatic plants, the most common of which are known to you and me as reeds, bulrushes, tulies, and cattails. They’re pretty much synonymous with wetlands and the waterfowl hunting that occurs among them.

The waterfowl team at First Lite felt it appropriate to draw both inspiration and appellation for their new camo from the stuff that frequently hides us from some of the sharpest eyes in the animal kingdom: ducks and geese. The result is a radically new pattern that is at once classic old school and slick modern. And while Typha angustifolia may have been the spark, this same natural color palette paints the other common covers of waterfowling: corn, stubble, and marsh grasses.

“Really the best part about it for me is that it's light enough,” said MeatEater’s Sean Weaver, host of the upcoming Duck Lore series. “Most of the time, camos end up being these compromises trying to ride the line of not too dark, not too light, and end up being not good for either. In all my years of guiding waterfowl, I’ve never told a client they look too light in the blind—but I’ve told a fair share that they look too dark. It’s the dark spots and holes that tip the birds.”

But just being “light enough” isn’t enough to really disappear into the complex visual environments of the swamp. Reeds have depth, variation, and shadows. The high contrast of color and random overlap of Typha’s abstract elements is visually disruptive and confuses depth perception, preventing birds from distinguishing a silhouette from its surroundings. And early evidence demonstrates this provides the desired result. 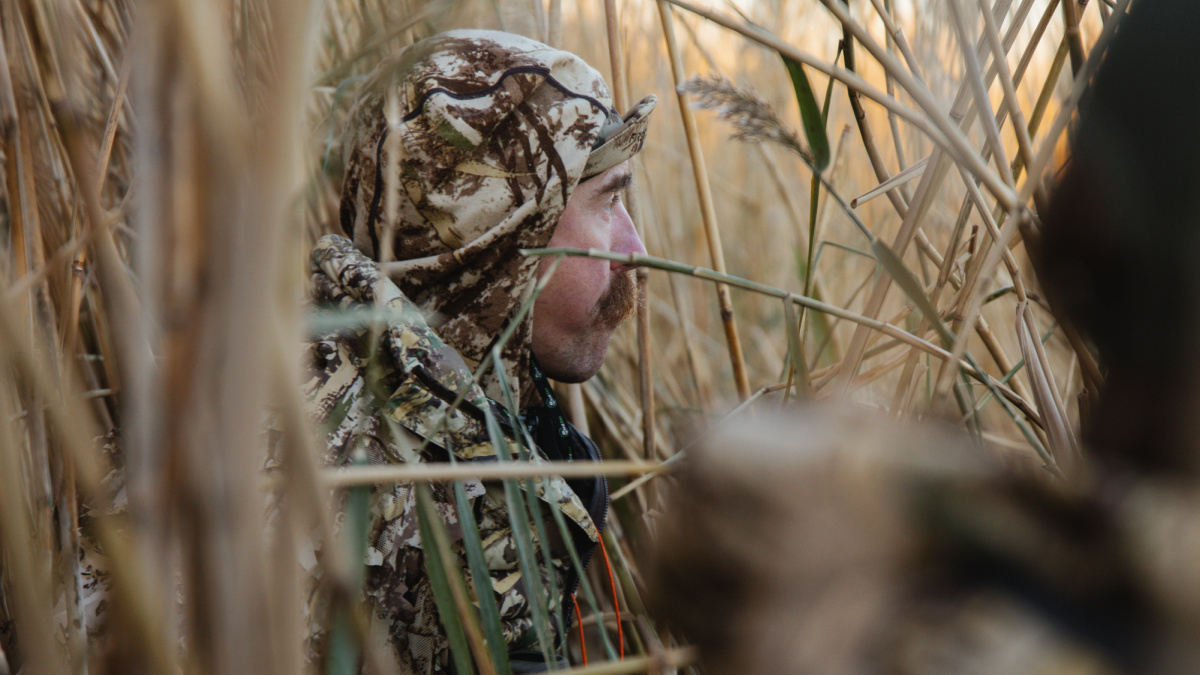 “This season, we've done a lot of hunting in natural cover, building natural cover blinds, hiding back in the cattails 5 yards,” Sean said. “Just this morning we were hiding in a willow edge in Missouri. I've probably hunted less out of blinds this year than any year. And part of that's been because the hunts had great natural hides, but also it's just because Typha worked. I haven't had any hunts where we were doing natural hides using natural cover and vegetation that the hunts didn't pan out because we were flaring birds.”

First Lite endeavored to disrupt large shapes and silhouettes with microtextures that visually melt together at a distance with this camo, they say—much like their current roster of successful patterns. Negative space plays a big role in that. They call it “Crackeleture,” continuous light, blank color between the muddy markings and cattail shapes that provide an abysmal depth of field. They are careful, however, to emphasize that Typha is not intended to serve as a flooded timber pattern. Still, any seasoned waterfowler will appreciate the influence drawn from tried-and-true camouflages while taking those concepts into the future.

“It's got this modern digital look but with some retro characteristics, like the couple of cattail breakups throughout,” Sean said. “It’s definitely different than any other pattern I've seen.”

To stay up to date on Typha's release, as well as all of our waterfowling articles and videos, make sure you subscribe to our new waterfowl newsletter. It'll feature our best duck and goose hunting content and have something for everyone, whether you hunt corn fields in the North, flooded timber in the South, or anything in between.

You can see this new design in action in two upcoming video series launches, Season 1 of Duck Lore with Sean in July and Season 2 of Duck Camp Dinners with Chef Jean-Paul Bourgeois in August. Typha will be available in a suite of burly outerwear, insulating innerwear, and hunt-driven accessories beginning in Summer 2022, designed for whatever Typha, Zea, Salix, or Hymenachne you may be hunkering in.

Welcome to the Duck Lore Breakdown, an article series that will correspond to each episode of Duck Lore. In these articles, we’re going a layer deeper than the show. We’ll discuss the weather and hunt conditions, target species and their environment, as well as episode-specific gear we used and the technology behind some of that gear. You can watch this North Dakota episode here. Target Species The original intended goals and expectations of...

Waterfowl hunters are no strangers to working the road. While Canada offers some of the best waterfowling on the continent, COVID travel restrictions will likely keep hunters from visiting our neighbors to the north this season. Thankfully, there are plenty of great DIY opportunities south of the 49th parallel. The abundance of birds and availability of public access in these three states make them top destinations for freelance waterfowl hunters...

Waterfowl hunting is a gear-intensive sport, but there probably isn’t a single piece of equipment more important than a shotgun. Choosing the right firearm for the job requires some planning. Here are a few thoughts on how to make the right choice. 12 vs. 20 When steel shot became the law of the land for waterfowl hunting in 1991, hunters discovered that the first generation of non-toxic shells were a far cry from the hard-hitting lead shells...