What You Need to Know About Duck Decoy Spreads

Waterfowl decoys are visual aids that serve to attract ducks and geese and convince them that an area is safe for landing. The placement and number of decoys that one uses is highly situational, but wind direction is always a major factor.

Like airplanes, ducks and geese approach their landing areas by flying into the wind. They cup their wings to create drag, and then touch down feet first. When setting out decoys, always make sure to position yourself with your back to the wind or coming from an angled direction over one shoulder. This will ensure that the birds make their final approach from a direction where you can clearly see them.

None of this information should be taken as the final answer to decoy setup. While these are time-tested and proven methods, there are many other ways to go about it. As you hunt the same areas again and again, you’ll gain a better understanding of what spreads work best in your particular areas. When it comes to decoys, an ounce of experience is better than a pound of reading. 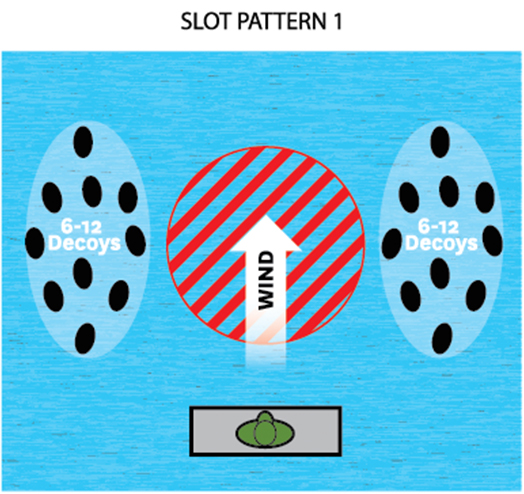 This example above, of a slot pattern, decoy spread utilizes 24 decoys, but this can adjusted up or down according to the specifics of the area or the limits of how many decoys you own. With the wind approaching from behind your position, place 12 decoys to the left of your blind about 15 yards out. Do the same on the right side. Avoid grouping the ducks too close, as ducks clump up when they are frightened and you don’t want to send that message. The separation between the two sets of decoys creates the “slot” and that is where the majority of ducks will attempt to land. 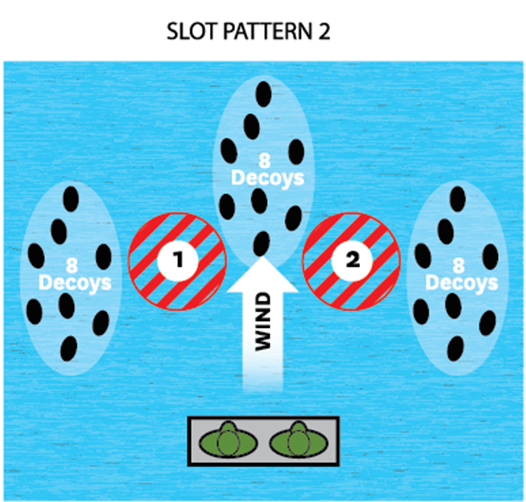 When hunting with 2 or 3 hunters in the same blind, you can create multiple slots by dividing the 24 decoys into groups of 8. This makes three major groups of decoys that can be spread evenly creating additional slots. These slots become shooting zones wherein multiple hunters can shoot safely without crossing each other. This makes the hunt safer. 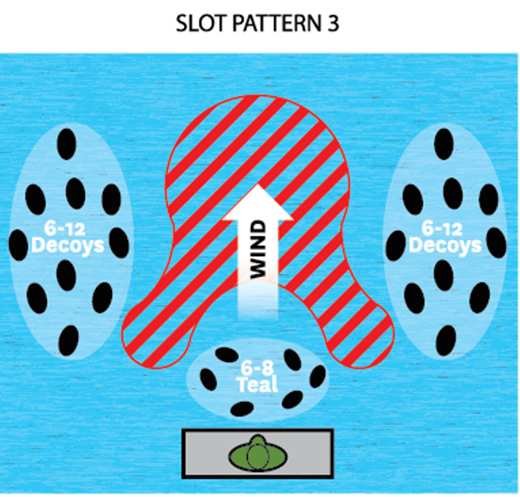 For extra encouragement, placing a group of teal five or so yards out in the water in front of the blind helps. Depending on the size of water you are hunting, anywhere from six to twelve teal decoys will work.

Teal are very nervous birds, scattering whenever there is a threat. When teal are in the water, other ducks will have a heightened sense of safety when trying to land. It also makes the decoy spread larger and will be seen more easily by highflying birds. 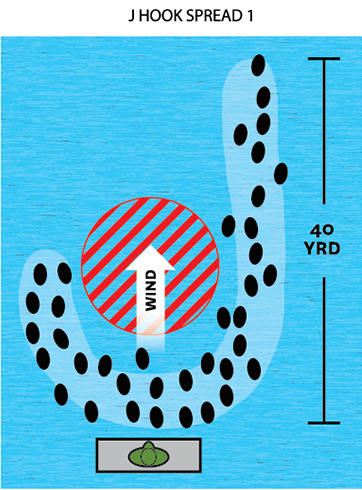 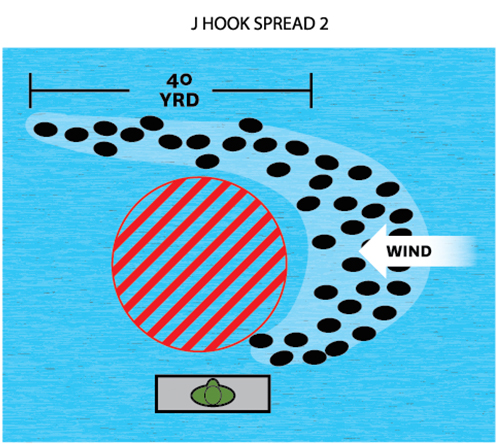 This spread pattern can be used for puddle ducks in a strong wind or with diving ducks on open water when hunting from a blind or boat. A “J” pattern is just as it sounds, it’s a string of decoys that start in a long single line and stretches out into a hook. This creates something similar to a landing strip with an open pocket of water in the middle as a landing pad. When setting up a J pattern, the straight line of decoys is placed into the wind and rounds away from the wind.

This forces the birds to follow the string of decoys into the opening at the bottom of the J. This pattern can be moved around a large pond or open water depending on what direction the wind is coming from, creating freedom to hunt a stationary blind or boat in various wind situations. 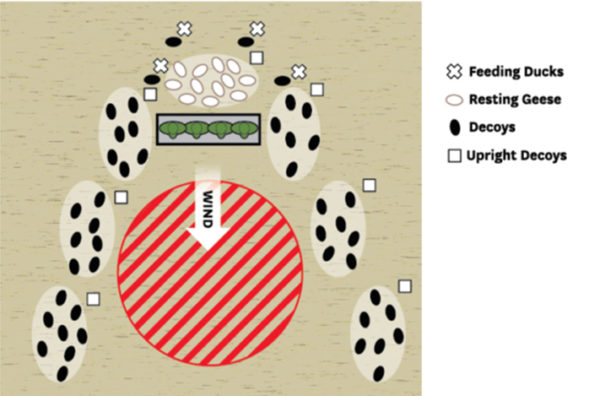 The slot pattern and J pattern can also be combined in pond areas into a horseshoe shape creating a curved landing zone that encourages birds to land in the open shooting area in the middle.

Sometimes, spreads with fewer decoys are better. This is especially true on small ponds or when hunting highly pressured ducks that have grown suspicious after seeing many conventional decoy spreads containing a couple dozen decoys.

Built on a J-Frame platform this single reed duck call is built for callers of all skill level and abilities.

After hearing for years that duck hunters are looking for a double reed duck call that has the body and ability to reach the sounds only a single reed can we set out to change that and we are proud to offer this "new style" double reed.

A next-to-skin base layer for high output hunts in hot weather.

Waterfowl
Get the latest in your inbox
Subscribe to our newsletters to receive regular emails with hand-picked content, gear recommendations, and special deals.
Our picks for the week's best content
For the whitetail obsessed, with Mark Kenyon
Redefining our connection to food, with Danielle Prewett
With Joe Cermele and Crew
Technical apparel for the avid hunter
Purpose-built accessories for hunting and fishing
Quality elk, turkey, waterfowl, and deer calls
Privacy Policy

Duck hunters use a whole range of letters to describe decoy spreads. I can’t speak for all of them, but I doubt the grammarians of the 16th century had any clue their contributions to the alphabet would inspire the tactics of 21st-century waterfowlers. Regardless, the bird’s eye view of these select letters has been the demise of many ducks, and their effectiveness is without question. If you’re new to duck hunting or just looking for tried-and...

Knocking a fast-flying bird out of the sky with a shotgun is one of the greatest challenges in hunting. Doing it once or twice a season is tough enough; doing it consistently from one year to the next, with a variety of species, can seem damn near impossible. In fact, achieving a base level of proficiency with a shotgun is much more difficult than a rifle. That’s because wingshooting, the art of hitting flying targets with a shotgun, occurs on a...

What You Need to Know About Hunting Gear

Gear is like booze. As hunters and anglers get older, you often realize that the quality of your equipment is more important than quantity of gear laying around in your garage. I’d rather own one reliable, straight-shooting rifle than an arsenal of cheaply built guns. A painful fact about high-quality hunting gear is that it tends to come at a high price. Here is what you need to know about hunting gear. When you’re considering your gear budget...