A Guide to Hunting Teal

You may think you’re good shot but the small, fast-flying teal will challenge even the most talented wingshooters.

North America has three teal species, blue-winged teal, cinnamon teal, and green-winged teal. They are the smallest of the puddle ducks, with most teal topping out at well under a pound.

They can also be one of the toughest ducks to hit with a shotgun. Many hunters try to explain away their inability to hit teal by citing the birds’ fantastic flying speeds. While teal are actually incapable of approaching the top flight speeds achieved by many larger ducks, they do seem to do everything at an accelerated pace.

Mallards might approach a decoy spread by slowly dropping from the sky like an Airbus, but teal will usually come in like F-16s. They materialize out of nowhere, buzzing low and fast across the water in a wild zigzagging pattern, and then vanish from sight without ever offering a plausible shooting opportunity.

This is especially frustrating because a missed teal is a missed meal and a damn fine meal at that. These small, agile birds are among the finest tasting ducks.

Bar Room Banter
Hunters sometimes refer to teal, particularly blue-winged teal and cinnamon teal, as “summer ducks.” The birds are early migrators, and leave their summer nesting grounds well ahead of other duck species and, sometimes, well ahead of the general waterfowl hunting season. Some states accommodate teal hunters by offering an early teal-only duck season.

Physical Description and Range
Green-winged teal are the smallest puddle duck, weighing only ¾ pound and measuring just 13” to 15”. Drakes have a chestnut-colored head with a dark green ear patch. Sides are barred gray and white; wings are light brown.  Hens are mottled brown and generally similar in appearance to the hens of both blue-winged and cinnamon teal. However, hens can be readily identified by their emerald-colored speculum feathers.

Green wing teal breed throughout Alaska, Canada, and the prairie pothole region of the Great Plains and Upper Midwest. The species has widespread wintering grounds, ranging across the southern tier of the U.S. and throughout Mexico and much of Central America. They are particularly abundant in Louisiana and Texas. 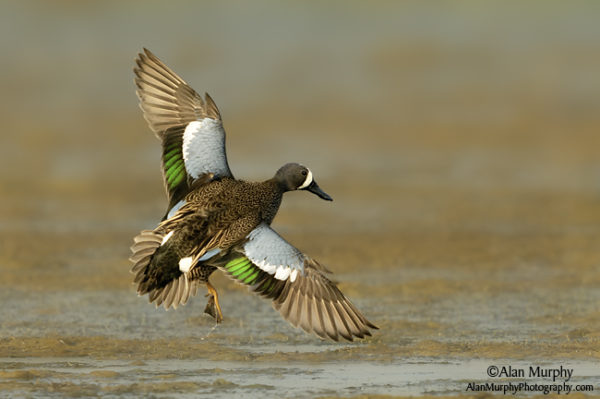 Physical Description and Range
Blue-winged teal are slightly larger than green-winged teal, weighing up to a pound. Drakes have a slate blue to purple head with a distinctive white facial crescent that runs from the jawline upward past the eye. The bill is long and black, and the body has an overall polka-dotted appearance of black on brown. Speculum feathers are blue.

While hens are mottled brown and very similar in appearance to the hens of green wing teal, their blue speculum feathers can distinguish them. Blue winged teal nest throughout Alaska, across much of Canada, and in most of the United States excluding the Pacific Coast and extreme south. They winter in the southern U.S., Mexico, Central America and South America.

Physical Description and Range
Cinnamon teal weigh up to a pound. Drakes have a cinnamon colored head, neck, breast, and belly.  Feet are orange. The bill is wider and more shovel-shaped than other teal. Cinnamon teal hens are virtually indistinguishable from the hens of blue-winged teal; they are mottled brown, with blue shoulder patches and dark green or emerald speculum feathers.

Cinnamon teal nest in the western U.S., particularly along the Pacific Coast and the Great Salt Lake. They winter in the southern portions of California, Arizona and New Mexico, as well as Mexico, Central America, and South America.

Habitat
There is some variation between the three teal species, but the birds are generally found in shallow, heavily vegetated wetlands where food is easily accessible near or above the water’s surface.

Diet
Teal are particularly fond of aquatic plants, including algae, duckweeds, and pondweeds. They will also eat the seeds of various grasses and sedges, as well as a wide variety of aquatic invertebrates.

Life and Death
Like all puddle ducks, teal are hunted by a wide variety of terrestrial, avian, and aquatic predators. Blue-winged teal have the highest mortality rates of any puddle ducks, perhaps due to long migrations.

Telltale Sign
Like most duck species, teal leave very little evidence of themselves. Look for feathers and the distinct webbed-foot pattern from their movements around the muddy edges of bodies of water.

Edibility
Teal flesh is generally milder and tenderer than many other duck species. An excellent way to introduce the uninitiated to the joys of eating waterfowl.

For anyone who hasn’t hunted teal it is a trip worth taking. These ducks are fast paced and fun to hunt. With a limit full of teal a hunter will be eating well.

Save this product
First Lite
Ground Control Pack
$250.00
Hauls everything Waterfowl hunters need for long mornings of directing air traffic into the landing zone. Multiple carry configurations, stowable backpack straps, external molle panels, internal folding dividers, and a sonic-welded bathtub design to keep your gear dry through seasons of abuse on the water.
Save this product
First Lite
LZ Jacket
$400.00
A full-season waterproof Waterfowl jacket designed to fit over varying degrees of insulating layers to keep you warm down to 30°F. The LZ is patterned for wing-shooting with heavily articulated arms and specialty pocketing optimized for security and quick access to essential gear.
Save this product
First Lite
Refuge Bib
$500.00
A Waterfowl bib built for performance in the extreme cold of late season field hunting with a robust insulation package, durable waterproof/windproof fabrication, and an extensive feature set optimized for pit and layout blinds.
Save this product
Dakota Decoy
Mallard Fully Flocked Floating 6 Pack
$129.99
These are designed to give hunters the most life-like duck decoy they can get.
Save this product
Dakota Decoy
Packable Mallard 6 Pack Painted Heads
$79.99
The decoys are lightweight, collapsible, and packable for those who must carry their decoys into the honey hole.
Save this product
First Lite
Refuge Parka
$500.00
The Refuge Parka was built for performance in the extreme conditions of the late season with its robust insulation package, durable waterproof materials, and an extensive feature set optimized for every moment of the hunt.
Save this product
First Lite
Refuge Muff
$90.00
Built to keep cold, wet hands warm and digits nimble in the extreme conditions of the late season with its waterproof/windproof fabrication, hi-loft merino sherpa fleece liner, and exclusive zip-open design for quick drying between hunts.
Save this product
Tanglefree
Flight Series Panel Blind
A revolutionary new concealment system from Tanglefree. Offering the ultimate in portability and concealment to effectively hunt field edges, cattail sloughs, standing corn, river banks, and even in the middle of the field from a sitting position while being completely concealed.
Save this product
Tanglefree
Little Buddy Dog Blind
Keep your favorite hunting partner concealed and protected from the harshest conditions. Built with a corrosion resistant aluminum frame, rugged 600D coated Polyester, a double entry door, extra stubble straps for adaptability and a low profile, your companion will be ready to work all day.
Get the latest in your inbox
Subscribe to our newsletters to receive regular emails with hand-picked content, gear recommendations, and special deals.
Our picks for the week's best content and gear
For the whitetail obsessed, with Mark Kenyon
Redefining our connection to food, with Danielle Prewett
Your one-stop for everything waterfowl, with Sean Weaver
Get out on the water with the MeatEater Fishing crew
Technical hunting apparel
Purpose-built accessories for hunting and fishing
Quality elk, turkey, waterfowl, and deer calls
Privacy Policy

A Species Profile on Mallards

Duck hunting in North America usually means that mallards are the target species.  A big flock of greenheads flying into a decoy spread instills excitement into the hearts of even the most seasoned duck hunters. Mallards are the most common North American duck species, and the most commonly hunted. They can be found in most every state and are widely available through Canada and Mexico as well. Besides the ready availability of mallards, they are...

A Basic Overview of Puddle Ducks

Puddle ducks, also known as dabbler ducks, are ducks that feed primarily in shallow water and that do not dive beneath the water’s surface. Mallards, teal, wood ducks, widgeons, gadwalls, pintails, and shovelers are all puddle ducks. They have large wings relative to their body size, which enables them to lift off from land or water in a vertically upward direction rather than needing the long horizontal takeoff “runway” required of deep-feeding...

Diver ducks, also known as diving ducks, are capable of diving beneath the water’s surface in order to feed. They are generally associated with larger and deeper waterways than puddle ducks. Due to the fact that they have proportionately smaller wings than puddle ducks, they are incapable of lifting directly into the air from a standstill and must run across the water’s surface in order to take flight. When flying, they have much shorter and...