If you want to increase your decoy effectiveness this spring, consider what the real turkeys are doing. A 30,000-foot-view explanation is that flocks start out as big as they’ll be all season and shrink to smaller groups as spring progresses.

This means that multiple decoys are a solid choice on Day One, but you’ll probably only want a single hen deke by the last week of the season. The space between offers a moving target for decoy choice and setup. Here are three scenes to set this spring that are likely to walk a tom into shotgun range.

The Full Strutter
If you want to experience turkey hunting at its worst, put out a full strutter at the wrong time. You’ll see red heads pop up in the distance and then bob away like you’ve got a coyote sitting in the middle of your spread. When you time it right, however, you’ll get an incredible reaction.

When winter flocks start busting up, the fighting starts. During this time, the toughest, biggest birds usually end up taking names and kicking ass. If you scout enough, you’ll see those birds tucked into the middle of a bunch of hens or trailing just behind them, and they’ll strut nearly nonstop all day long.

Where those hens like to feed early in the season is where you should place a full strutter, along with a couple of hens. The key here is location. If you want to elicit a fighting response from a dominant tom, you’ve got to be on his turf. If you’re off by 250 yards, he isn’t coming. Make sure your scouting is accurate and that his flock of girlfriends is going to wander by.

Once located, face your strutter towards where you’re planning to hide and get ready for the action. This won’t get a jake or confident 2-year old to come in, but a boss gobbler with hens will take the bait almost every time. 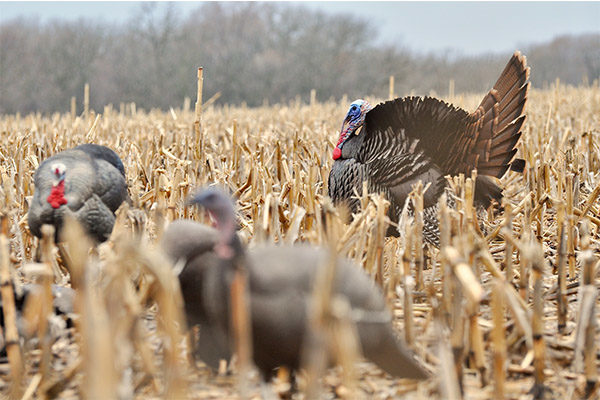 The Shortbeard
The single best decoy anyone can own is a submissive, half- or quarter-strut jake. If you’re into shooting any legal turkey, this type of jake will draw in anything with a beard. These dekes are effective all spring, so long as you pair them with the right birds. A laydown hen is great to go alongside a jake deke, especially for the first couple weeks of the season. Any longbeard or flock of jakes that sees a loner who looks like he’s found a lady is likely to commit. Just make sure the laydown hen is visible to approaching birds and not obscured by grass or brush.

This two-bird setup is good, but can be even better if you mix in a couple of feeding or upright hens (especially in the first half of the season). Position them facing your setup all in the same direction, with the jake in last place. The ruse should look like a small flock walking away, with the only male in the group about to get lucky.

As the season progresses, pay attention to the reactions you get. Eventually you’ll want to peel off the extra hens and step down to a two deke setup.

The Eligible Bachelorettes
I grew up hunting the Minnesota late season because it guaranteed I’d get a tag every year. What I learned in those formative years was that any combination of decoys might work, but the best bet was to use one or two hens.

By May, the fever of the season has died down and there are a lot of loners on the landscape. The birds are still workable, but they don’t want to fight anymore and they really only want a sure thing. This is when you should take a page out of the fly fisherman’s book and match the hatch, so to speak.

When you hunt later in the year, you tend to see lots of single or paired up hens and mostly loner gobblers or small groups of jakes. This is likely due to the availability of food (insects and fresh growth), as well as the amount of nesting going on. Plus, the birds no longer need to be concentrated on the best food sources or most weather-friendly roosts. They can, and will, spread out across their entire home range.

Toms know this, so when they encounter a solo decoy, or maybe a feeder and an upright hen, it jives with what’s going on with the flock at that moment. In their eyes, they’ve found a willing companion right at bar close. Give them what they expect to see (and hear), and you’ll go home with a buzzer-beater longbeard.

The truth is, most hunters will capitalize on every advantage they can buy. If they say otherwise, they’re probably lying. This is definitely true when it comes to today’s world of ultra-realistic turkey decoys. When given the option, I’ll admit, realistic decoys are worth every penny. This is especially true for the bowhunter who needs toms to be hypnotized if they want half a chance at drawing their bows. However, equally important is which...

Now more than ever, having realistic turkey decoys is critical. “There’s been an education curve out there for these birds today,” veteran turkey hunter and MeatEater contributor Tony Peterson said. “We’ve killed off a lot of the dumb ones.” With most of those “dumb” birds gone, we’re left hunting their smarter (or at least more discerning) brethren. This means decoy realism is of critical importance in many common scenarios. “If you’re run-and...

There’s one frustrating scenario every turkey hunter is familiar with: a gobbling tom comes in on a string, but hits an invisible wall at 75 yards before shuffling away. There are plenty of reasons why a longbeard will change his mind and pull a 180, but the most common involves some level of decoy shyness. It’s a major buzzkill. Dave Smith, founder of Dave Smith Decoys and someone who knows more about turkey behavior than anyone I’ve ever met...