It’s been speculated by anthropologists that human language came as a result of our need to organize hunting activities.

As hunters, we rely on a commonality of terms in order to share information, swap stories, and ask questions. When one of us says something, it’s helpful if the rest of us knows what they’re talking about. To that end, here’s a basic rundown of methods and strategies used by small game hunters: still hunting; spot and stalk hunting; jump shooting (or flushing); drive hunting; ambush hunting; and calling/decoying.

If there’s a problem with such a rundown, it’s that it attempts to categorize all hunts under this small of handful of terms. Rarely do things happen so cleanly. You and a buddy might head out to decoy some mallards and then notice a few ducks landing in a small backwater off the river. On the way home, you make a detour to kick up those ducks and try to get a shot at them as they fly off. Thus, your decoy hunt has suddenly turned into a jump shoot.

Of course, most hunters would never think of these things in this way. When you’re hunting, they’d say, you do what makes the most sense in the moment. That’s very true. But still, it’s good to know the lingo. If you’re going to break the rules, you at least ought to know what they are. Below are the basic hunting methods, explained through in-the-field scenarios. 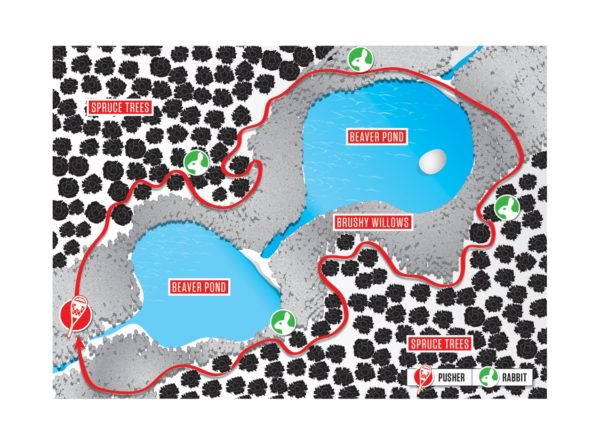 Still hunting is the most basic hunting method, because that’s pretty much what you’re doing when you take a quiet and slow walk through the woods in search of game.

In the above situation, a hunter in northern states is doing some late winter still-hunting for snowshoe hares with a .22 rifle. There are over four feet of snow on the ground and he’s wearing snowshoes to keep afloat on the surface. His hunting location is a network of beaver ponds where hares often congregate in good numbers to feed on willow shoots when other food sources are buried under snow.

A few more inches of powder came down the day before, perfect for snowshoe hare hunting and he’s surprised by the abundance of fresh tracks that were laid down in the last twelve hours. The bulk of the tracks seem to be congregated along the seam between the surrounding spruce forest and the willow stands along the creek and beaver ponds. There are too many tracks to simply follow a single animal, as every set of tracks gets confused and lost beneath the others. Instead, the hunter moves very slowly along the seam.

He’s not trying to flush a hare, it’d be gone without him getting a shot if it took off in a hurry. Instead, it’s his intent to spot the hares before they take off and then make headshots on them with his .22. No meat loss whatsoever.

He takes just a step or two between stops, studying the undergrowth and peering beneath every overhanging limb. It takes him several hours to cover just a mile of terrain as he works downstream, crosses on a beaver dam, and then hunts his way back upstream.

Jump-shooting and flushing have slightly different connotations. Jump-shooting generally refers to putting ducks and geese up off the water and then taking flying-away shots at the birds. Flushing implies upland game, “flushed” out of heavy cover. But despite these casual differences, the concepts are very similar in practice. In the above scenario, a hunter and her lab are working some old clearcuts and abandoned farmstead properties for ruffed...