Jump-shooting and flushing have slightly different connotations. Jump-shooting generally refers to putting ducks and geese up off the water and then taking flying-away shots at the birds. Flushing implies upland game, “flushed” out of heavy cover. But despite these casual differences, the concepts are very similar in practice. 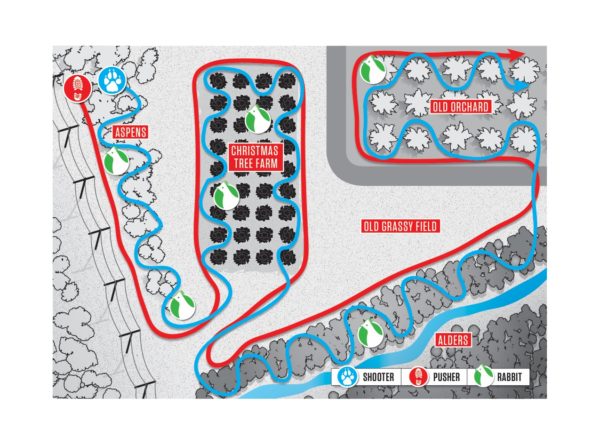 In the above scenario, a hunter and her lab are working some old clearcuts and abandoned farmstead properties for ruffed grouse and woodcock in late September. The hunter has yet to hit this location this year. She has no idea where the birds might be hanging around.

So rather than working just one type of cover, she’s going to sample around and hit as many different micro-habitats as possible in hopes of kicking up a couple birds. If she gets one, she can examine the crop to see what it’s been eating. This will help her better narrow down the search for more birds, because all she has to do is find more sources of the chosen food — something that’s easier than searching for birds from scratch.

There are still some leaves on the trees, which makes it difficult to see any appreciable distance. She tries to stay out in the open as much as possible, where it’s more likely for her to actually catch a glimpse of a flushing bird. Meanwhile, her dog thick edges of cover that she’s paralleling. If the dog flushes a grouse or woodcock, the bird will likely escape by flying out through more open cover rather than trying to blast deeper into the thickets where it’s been feeding.

The hunter’s route takes her along the cut edge of a powerline, along a brushy creek channel, along the edges of an old apple orchard, and around a forgotten Christmas tree plantation. All are likely places for a game bird to hide, and hopefully, flush.