How to Choose the Correct Rifle Scope

I killed my first Pennsylvania buck with a well-used .30-06, topped with a cheap fixed 4x scope. With only a few minutes of daylight remaining, I made a fairly long shot during a blinding, lake effect snowstorm. Between the small antlers and my limited visibility, it’s doubtful I would have even recognized the buck as a legal deer, let alone made the shot, without a scoped rifle.

Compared to the iron sights I’d previously used, the magnification of the scope and precision of the crosshairs boosted my accuracy and confidence at the range and in the field. Nevertheless, back then most hunters didn’t put much thought into choosing a scope for their deer rifles. For the most part, one scope was as good as another.

Today’s scopes are much better than they were just a couple decades ago, but choosing one is a lot more complicated. Hunters have a myriad of choices, but it’s possible to narrow down your selection based on your hunting needs.

Some whitetail hunters from out east may never take a shot longer than  100 yards. Their requirements for a rifle scope are much different than a big game hunter in the wide-open West. Still, other hunters who use a single rifle for all of their hunting also need a scope that can do it all. 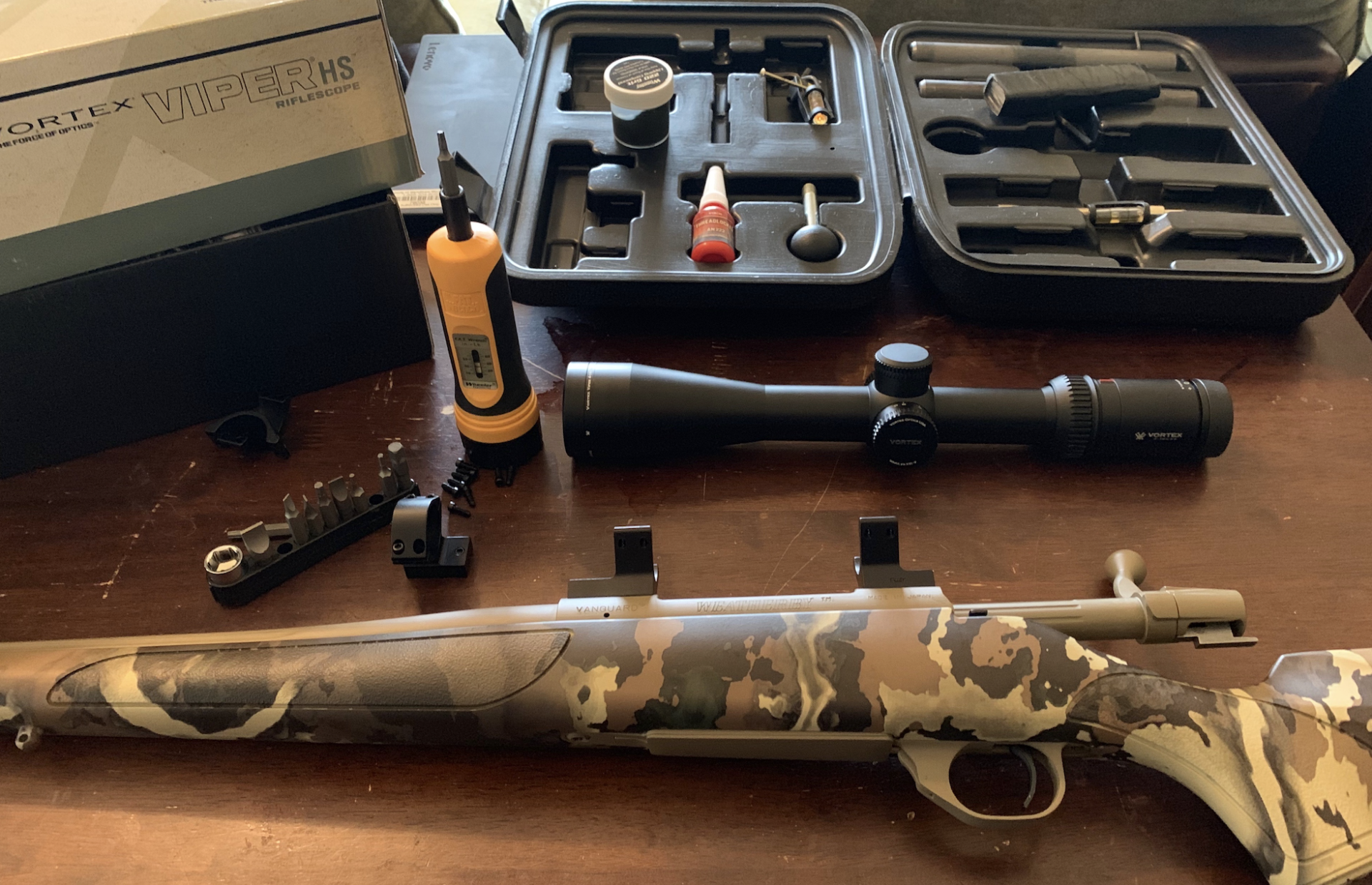 Budget
Budget is the first thing most hunters take into consideration when buying a scope. Prices range from less than $100 to well over $1000. When it comes to budgeting for a rifle scope, spend as much as you can afford.

Although it’s not always the case with hunting gear, when it comes to optics, spending more money gets you better quality and ultimately improved performance. That better performance is delivered in the form of more light transmission and greater clarity through quality glass. You’ll also get lighter construction and added features, including waterproof and fog-proof lenses and different reticle options. No matter how much you spend, always make sure to buy a scope that comes with a lifetime guarantee.

Fortunately, hunters don’t need to spend a bunch of money to get an accurate rifle. Plenty of affordable factory rifles provide out-of-the-box accuracy guarantees. But to achieve that guaranteed accuracy, you’ll need a good scope. I own a couple tack driver rifles that cost less than the scopes mounted on them. On the flip side, there’s little point in putting a bargain basement scope on a $1000 rifle.

Magnification
I mentioned earlier my first scope was a fixed 4x, meaning the magnification was not adjustable. Fixed magnification scopes have largely fallen out of favor, but there are still good reasons to use them. If you hunt in an area where you commonly need to make quick shots at short range in thick cover, a fixed, low-magnification scope is all you need.

Low power scopes have a wide field of view, which makes for faster target acquisition. Don’t think you’ll be hampered all that much by a fixed, low power scope, even if you might occasionally have to make a longer shot.

Many hunters feel a higher degree of magnification automatically results in greater accuracy, but it’s actually much easier to hold the crosshairs steady with a 4x scope than with one cranked up to 24x. The higher the magnification, the more exaggerated each movement becomes—every time you breathe, your heart beats or a muscle contracts, the crosshairs jump. This can be very unnerving when you’re bearing down on a distant big game animal.

Meanwhile, most hunters can consistently hit a deer in the vitals out to 200 yards or more with a 3x or 4x scope. Still, variable power scopes that can be set at higher magnifications can make long range shots easier, provided you’ve got a steady shooting rest.

Variable power scopes have a wide range of magnification choices. Some of the most popular choices for all-purpose, big game hunting are 3-9x, 4-12x  and 3-15x. My favorite is a 2.5-10x scope. Set on the lowest power, I’ve killed elk in thick timber with snap shots under 50 yards. At its highest magnification and from a prone shooting position, I’ve shot pronghorn antelope well past 300 yards with the same scope.;

Objective Lens
A scope’s objective lens faces the end of the rifle barrel, transmitting light to a hunter’s eye. The most common objective lens size for hunting rifle scopes is about 40mm wide.

Some hunters prefer the wider field of view of 50mm objective lenses. They also transmit more light during early morning and late evening, possibly giving a hunter a few extra seconds to make a shot. Other hunters who want a lighter, more compact scope prefer an objective lens of 32mm. I’ve used them all, and frankly I don’t feel either the 32mm or 50mm provide any notable advantages over the 40mm. Meanwhile, 50mm lens scopes are heavier and those with a 32mm lens have a narrow field of view.

Reticles
Reticles come in almost as many configurations as rifle scopes. A couple decades ago, most scopes featured duplex reticles, which is nothing more than a simple crosshair used for aiming. Originally, these duplex reticles were made using horsehair. Later, fine wire was used. Today, many of the best scopes have reticles etched into the glass lens of the scope.

Duplex reticles are still practical, even for long range shooting. If you’re familiar with your caliber’s ballistics—you know how much bullet drop will occur over a variety of ranges—you can shoot very accurately with a duplex reticle and standard big game calibers out to maximum point blank range, which is usually around 300 yards.

Two other popular hunting reticle choices are the BDC, or bullet drop compensating reticle, and the MOA, or minute of angle reticle.

The BDC reticle is the simpler of the two. The BDC incorporates three to five horizontal hashmarks below the main crosshair. Each of these hashmarks corresponds with a known amount of elevation drop, depending on the ballistics the caliber and bullet. Scope manufacturers provide this information for popular calibers and bullet weights, allowing the hunter to choose a hashmark to aim for whatever distance they’re shooting.

An MOA reticle is slightly more complicated, but works off the same basic principle as the BDC. However, the hashmarks below the main crosshair correspond to minute of angle elevation drop points. For instance, 1 MOA is equal to 1 inch at 100 yards, while multiplying to 4 inches at 400 yards.

A bullet that drops 24 inches at 400 yards would require a hunter to use the hashmark that corresponds with a drop of 6 MOA to make a 400-yard shot. This reticle system requires some calculating, so many hunters tape a small yardage/MOA cheat sheet to their rifle stock for quick reference.

Some reticles also feature windage hashmarks on the horizontal crosshair. At long ranges in open country, a stiff breeze can push bullets far from the point of aim. These reticles allow a hunter to accurately compensate for “wind drift.”

Turrets
Many scope manufacturers also produce custom caliber and bullet-specific elevation “turrets” that can be manually adjusted. Dialing the elevation turret to the yardage that matches the distance to a target allows for precision aiming. The turret moves the horizontal crosshair to account for bullet drop and the hunter is able to hold directly on the target. A lot of hunters use custom elevation turrets, but they’re unnecessary for the vast majority of shots in the field.

The Ideal Hunting Rifle Scope
If I had to pick the ideal all-purpose scope for a novice hunter’s first big game rifle, I’d tell them to choose a 3-9x40mm with a BDC reticle. Then I’d tell them to go to the shooting range and spend a bunch of time sighting in their rifle. The best rifle and scope combination is the one a hunter knows well. No rifle scope can guarantee accurate shots. Lethal shots on big game animals are the result of plenty of target practice.

Save this product
Vortex Optics
Diamondback 4-12x40 Riflescope
$249.99
The Diamondback - loaded with features!
Save this product
Vortex Optics
Razor HD LHT 3-15x42 Riflescope
$1299.99
"The LHT has become my go-to scope for nearly every hunt. It’s lightweight for easy backcountry carry, yet has the glass quality and exposed turrets for precision shooting from sunup to sundown." - Janis Putelis
Save this product
Vortex Optics
Diamondback 3-9 x 40 Riflescope
The performance-to-price ratio on this classic go-to hunting scope is off the charts when it comes to image quality.
Get the latest in your inbox
Subscribe to our newsletters to receive regular emails with hand-picked content, gear recommendations, and special deals.
Our picks for the week's best content and gear
For the whitetail obsessed, with Mark Kenyon
Redefining our connection to food, with Danielle Prewett
Your one-stop for everything waterfowl, with Sean Weaver
Get out on the water with the MeatEater Fishing crew
Technical hunting apparel
Purpose-built accessories for hunting and fishing
Quality elk, turkey, waterfowl, and deer calls
Privacy Policy

Video: How to Sight in a Rifle

Getting a new gun zeroed in or on target is not as complicated as some folks might believe. But it is easy to get a few crucial steps wrong. The proper equipment will make the process easier and more reliable. First, there’s your rifle and your scope. You can mount the scope yourself and use a laser bore-sighter to get the reticle near where it needs to be. At the range though, you’ll need a box or two of the same ammunition, a fresh target, a...

There are several things to consider when choosing a new rifle scope. Magnification is one obvious choice, and we covered MOA and MRad reticles in a recent article. Another feature to think about—and one that often baffles new hunters—is the scope’s “focal plane.” Scopes can be either “first focal plane” (FFP) or “second focal plane” (SFP). These terms refer to whether the reticle is placed in front of or behind the scope’s erector system. The...

If you have kids you want to get hooked on hunting, it’s important to think carefully before choosing their first rifle. Throwing them to the wolves with a .300 Winchester Magnum might make for a funny story when they’re older, but it’s a terrible way to recruit a future hunting buddy. There are tons of great calibers for youth hunters, but a brief MeatEater survey landed on three. For youth hunters, user-friendly recoil, minimal shot report, and...