In the past several years, it’s become more acceptable and more common for rifle hunters to take shots at longer and longer distances. This is in large part due to significant advances in rifle, ammunition, and optics technology that allow hunters to shoot more accurately at long ranges. Things like angle-compensating laser rangefinders, ballistic drop compensating scope reticles, elevation turrets, wind-doping phone apps, computerized ballistic charts, and super flat shooting long-range magnum calibers paired with aerodynamically superior bullets have all extended rifle accuracy out to distances that were considered unethical in the not-too-distant past.

I’ve happily taken advantage of some of this technology. I use a rangefinder to precisely determine shot distances. I have scopes with BDC reticles and elevation turrets. I use high-quality ammunition with bullets that provide the best accuracy for my rifles.

However, during big game rifle seasons, I’ve always followed my own version of “stretch the stalk, not the shot.” That’s because no matter what technology you’re packing on your rifle or in your pack, the longer the shot distance, the smaller the margin for error and the greater the degree of difficulty. Even with the most advanced hi-tech shooting systems, at long ranges the slightest mistake, overcorrection, misjudgment, or movement while pulling the trigger can result in a lost, wounded animal. Getting closer drastically minimizes the potential for those problems. That’s the most important consideration when it comes to killing a big game animal quickly and humanely.

I started hunting in the Rocky Mountains fifteen years ago after growing up rifle hunting in the thick woods of Pennsylvania, where shots on whitetails averaged well under 100 yards. Since then, I’ve killed over forty big game animals, including mule deer in rugged foothills, elk in steep canyons, and pronghorn in wide open sage flats. The vast majority of them were killed with a scoped centerfire rifle, but my longest shot stands at just over three hundred yards.

On every hunt, I work hard to stalk in as close as possible before even considering taking a shot. To me, that part of the hunt is challenging, fun, and rewarding when done right. It’s also practical.

By closing the distance to the point where there’s no need to worry about guessing how far the bullet is going to drop or relying on technology to compensate for bullet drop, I’ve put myself in a position where all I have to worry about is getting a solid rest, centering the crosshairs, and squeezing the trigger. It’s the best possible scenario for any big game hunter.

Even out West, where longer shots are more common, I simply haven’t needed to stretch my shots much beyond what’s considered maximum point blank range (MPBR) for the rifle calibers I shoot.

MPBR is a calculation based on a variety of factors, including rifle caliber, bullet speed, bullet weight, ballistic coefficient, and the range at which you zero your rifle. In general layman’s terms, MPBR is the maximum distance at which you can hold dead nuts on the center of big game animal’s vitals, and the bullet will not drop below that vital area.

This distance varies depending on rifle caliber and the size of the animal’s heart and lungs. For instance, a giant Yukon bull moose has a vital area more than double the size of a tiny desert Coue’s deer, and a .270 Winchester shoots much faster and flatter than a .30-30 Winchester. 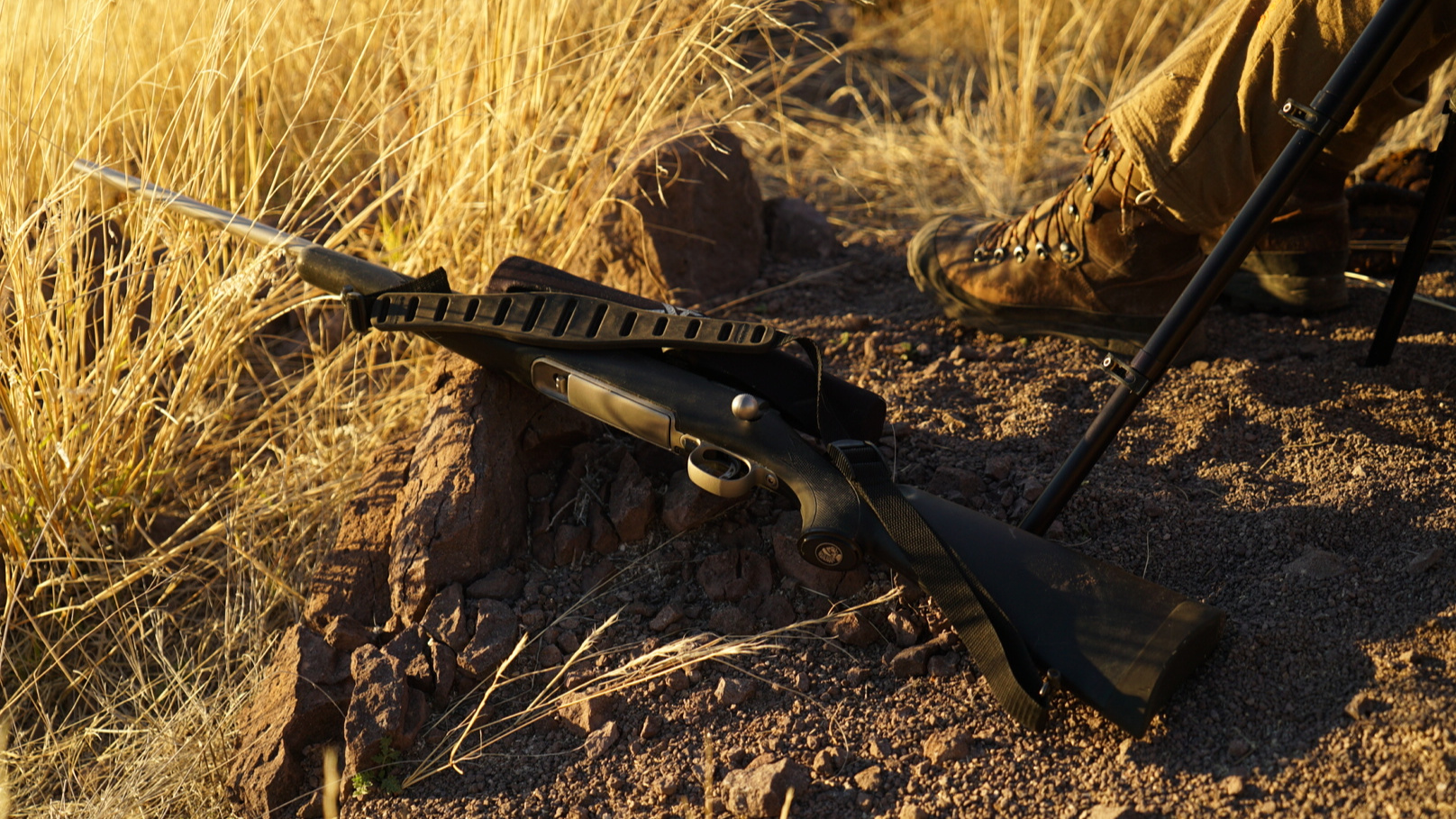 The smallest vital area you’re likely to be shooting at with a big game rifle is about the size of a pie plate, or 9 inches in diameter. So, the MPBR you should strive for shouldn’t drop more than half that distance,  or 4.5 inches. However, it’s good idea to shorten that MPBR distance to maintain drop of only 3 inches. That way, whether you’re aiming at a pronghorn or an elk, even if your aim is a little off, you’ve got some wiggle room to keep your shot inside the vital area. You can stretch your MPBR a bit by zeroing your rifle so it’s shooting a couple inches high at 100 yards.

For most popular rifle calibers like the .270 Winchester, .30-06, 7mm Remington Magnum, and .300 Winchester Magnum, the maximum point blank range is going to fall somewhere fairly close to 300 yards with standard bullet weights. For any caliber, beyond MPBR is also the distance at which bullets begin to drop very quickly. It’s where the flat plane of a bullet’s trajectory starts to nosedive towards the ground.

For precision accuracy,  you need to know the exact MPBR distance for your rifle setup; it may fall at 270 yards, or it might be 315 yards. You can use a ballistics calculator to figure out the exact 3-inch drop MPBR for your particular hunting caliber and load, but here’s a handy chart from Chuck Hawks, a gun writer whose opinion we respect a lot.

Some hunters feel limiting their shots to MPBR will end up costing them shot opportunities and that they’ll kill more animals if they can take longer shots. There’s some validity to this idea.

Perhaps there’s a canyon or an open meadow between you and an animal that is on high alert and keyed into your position. In circumstances like this, you may not be able to sneak inside MPBR, although it doesn’t happen nearly as often as you might think it does.

This is especially true if you’re willing to take your time and be stealthy while stalking an animal, or if you wait for a situation when you can stalk closer without being detected. Falling back on personal experience with a big sample pool to draw on, year after year, I’ve managed to fill tags without stretching the shot to extreme distances. There’s only been a couple of times when I couldn’t get inside that magical distance where all you have to do is hold on the center of the vitals and pull the trigger.

Even if I screw up a stalk and spook an animal trying to get inside MPBR, that’s an outcome I’m comfortable with, but a miss or wounded animal isn’t.

Jack O’Connor is still one of America’s most famous big game hunters, and he understood the relationship between caliber, ballistics, and shot distance very well. Many years ago, he touted a system where the rifle was zeroed in a few inches high so that he could extend the distance at which he could hold directly on the vital area; it was an early version of shooting for MPBR.

Despite this, he often shot beyond those distances, and guessed the holdover point. Expertise aside, he also regularly mentioned hitting animals in the leg, the ass, and the guts.

For hunters that do want to shoot out past 300 yards, there’s advantages to using the MPBR shooting system, even if you use scopes with BDC reticles or yardage elevation turrets. If you range an animal that is inside your MPBR, you can just put the crosshairs on the vital area and shoot without messing around with anything. Beyond the MPBR, you’ll want to utilize the tools that allow you to make an accurate shot. If you practice enough at the range at distances exceeding your MPBR and understand how your equipment works, it’s possible to reliably kill animals at longer ranges.

Even though I do these things, I’m sticking with shooting for MPBR. It has done a few things for my hunting success.

First, it keeps things simple. I’m not messing around with elevation turrets or figuring out which BDC point to use on my scope, which saves time and lowers stress levels. Secondly, it’s unnecessary to estimate or guess the “holdover”, or how high to aim above the desired impact point. There’s a lot of confidence knowing the bullet is going to hit damn near where I’m aiming over a wide range of distances. Finally, I’m not tempted to take shots that I’m not certain will result in a dead animal. 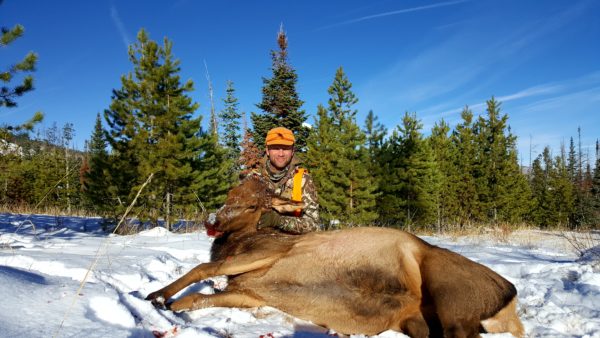 There’s an old saying that  goes, “Hold on hair, not air.” It means you should never take shots that require you to guess the holdover distance on an animal. It still applies today. It was the case just a couple weeks ago when I filled my elk tag with dead center hold at 250 yards on a cow that was seconds away from disappearing into the timber. Without the confidence of knowing all I had to do was aim and squeeze, I might have missed that opportunity.

My long-term goal is to maintain my string of MPBR kills. I feel that the shorter the shot, the better. Half the fun of hunting for me is knowing I hunted well enough to fool a wary animal’s eyes, ears, and nose.

A MeatEater’s Case for Getting the Lead Out

The subject of non-toxic ammunition has been a contentious issue with many hunters ever since the initial ban on lead ammunition for waterfowl hunting and only grew more controversial when the state of California banned lead ammunition for all types of hunting, and we receive a lot of questions here at MeatEater on the subject. Steve does shoot lead ammunition on some hunts, but he has used non-toxic options successfully on everything from ducks...

The Case Against Hunter Recruitment

The following opinion piece is written by my brother, Matt Rinella. He’s a research ecologist who has devoted his life equally to hunting and conservation. You’ve maybe seen him on old episodes of MeatEater or listened to him on more recent episodes of the podcast. For years now, we’ve been debating the merits of hunter recruitment. I’ve expressed my opinion that we need healthy numbers of hunters in order to maintain political clout and...