Many exotic species of game animals and birds have been introduced in America over the years. Some of them are widely available across much of the country while others exist only in isolated areas. The hunting of exotic species is often associated with large, high-fence Texas ranches that offer canned hunts for many African and Asian big game animals. But many exotic game birds and animals can also be found on public lands throughout America.
Some of these animals can cause problems for native plants and wildlife. Others seem to exist without any negative impacts on the landscape. Whatever the case, our modern wildlife managers are now past the point of intentionally introducing any new species, but these exotics do provide us with opportunities to get out and enjoy hunting on our public lands.
Game Birds 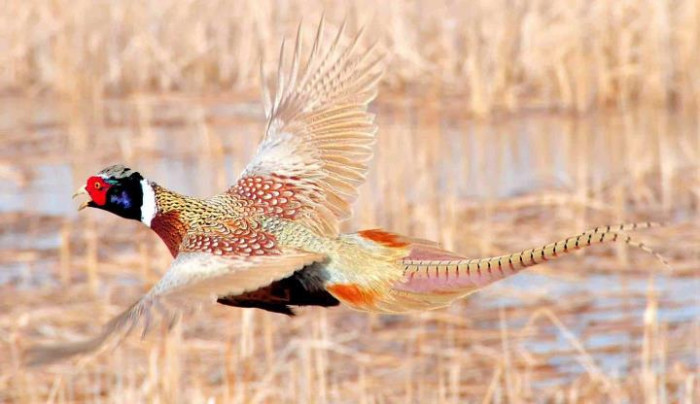 Ringneck Pheasants
Ringneck pheasants are arguably America’s most popular upland game bird. Native to Asia, Ringneck pheasants were brought to Europe hundreds of years ago, where they were wildly popular with aristocratic hunters. The first successful introduction of pheasants in America occurred in Oregon in 1892. More introductions occurred and before too long, wild populations of the birds could be found all over the United States. In some areas where wild ringneck pheasants once thrived, brushy edge habitat that pheasants rely on for food and cover is being eliminated and bird numbers have fallen. But there’s still plenty of ringnecks around in the heart of pheasant country in the upper Midwest. Public land hunting opportunities are easy to find for ringneck pheasants.

Hungarian Partridge
Hungarian, or grey partridge, are a favorite species for upland bird hunters in the northern prairie and Rocky Mountain states. They are native to Europe and Asia and were brought to North America in the late 18th century with additional introductions occurring later. Hungarian partridge tend to be found in coveys consisting of six to twelve birds. Well-established wild populations provide great upland hunting around brushy draws and grassy, open country near farming operations. They can be found on public lands throughout their range. 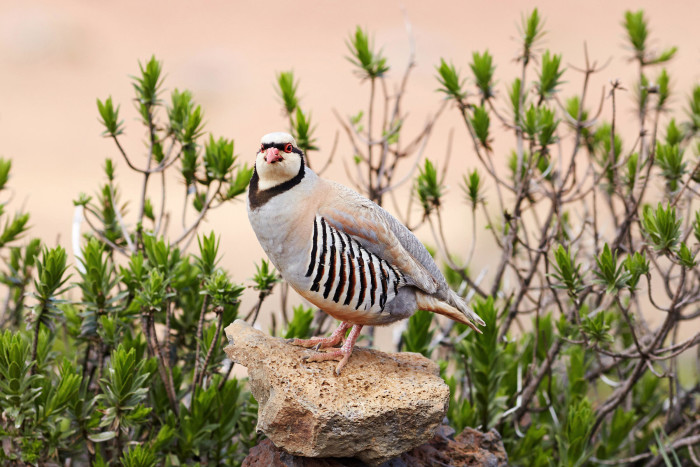 Photo: Marcus Hebel/Flickr Creative Commons
Chukar
Chukar are a partridge-sized game bird native to the Middle East. They were first introduced to the United States in the late 19th century but large scale introductions occured between 1930 and 1970 when hundreds of thousands of the birds were released throughout North America. Wild populations of chukar are now common in the mountainous areas surrounding the Great Basin in the states of Nevada, Oregon, Washington, and Idaho. Smaller, more isolated populations exist elsewhere in huntable numbers. Chukar are known for their propensity to live in rugged, steep, arid country. Coveys often flush wildly downhill after hunters spend hours climbing uphill to find the birds. Hunting them can be hard on both the hunter and their bird dog but they can be found on vast expanses of accessible public land.
Big Game

Sika Deer
Sika deer are a small Asian deer species that resemble our American elk, in both appearance and behavior. The largest wild, free-ranging population of Sika deer in America are found in Maryland’s Chesapeake Bay region. Sika deer were introduced here in 1916. Since then their numbers have expanded into a growing, huntable population. They prefer forested wetlands and marshes that mimic their native habitat. Sika deer can be hunted on large tracts of public land along Maryland’s Eastern Shore. You can hear all about Steven Rinella’s recent Sika deer hunt on Maryland’s Delmarva Peninsula on the MeatEater Podcast Ep. 89: Ghost of the Marsh here or on Apple Podcasts, TuneIn, Spotify, and Stitcher. 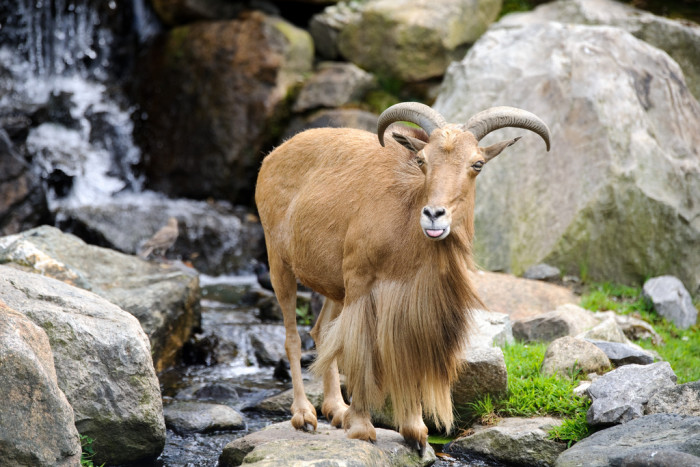 Cheeky Auodad by Eric Kilby
Auodad
Auodad, or Barbary Sheep, are a large sheep species native to Northern Africa. Auodad were released into the wilds of Texas and New Mexico in the 1950’s and hunting seasons were implemented shortly thereafter to control their expanding numbers. Wild populations of these sheep can be found in the rocky, mountainous desert country that resembles their native habitat. Here, they are known to compete with native populations of bighorn sheep and mule deer. A very limited amount of public-land, limited-draw hunting is available in Texas for auodad but in New Mexico, over-the-counter tags allow for year-round hunting on public lands. For hunters that might never draw a tag for a native North American sheep, a public lands auodad hunt offers the next best thing. 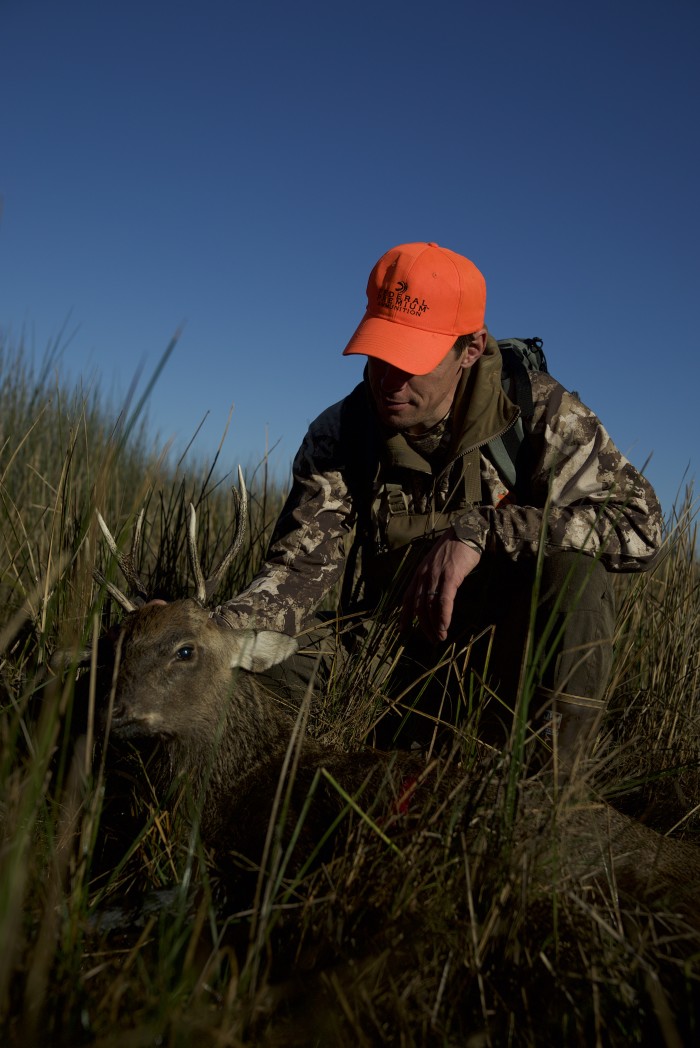 Ibex
In 1970, fifteen persian ibex, a species of wild eurasian goat, were imported from Iran and introduced into New Mexico’s rugged Florida Mountains. With additional introductions, a sustainable wild population of ibex was soon established. Several hundred wild ibex now roam the region, offering hunters a chance at species not found anywhere else in the United States. Archery tags are fairly easy to draw but success rates are low. Rifle tags are much harder to come by but hunters have better odds at filling their tag. Both billy and nanny tags are available and there’s plenty of public land to hunt these critters on. 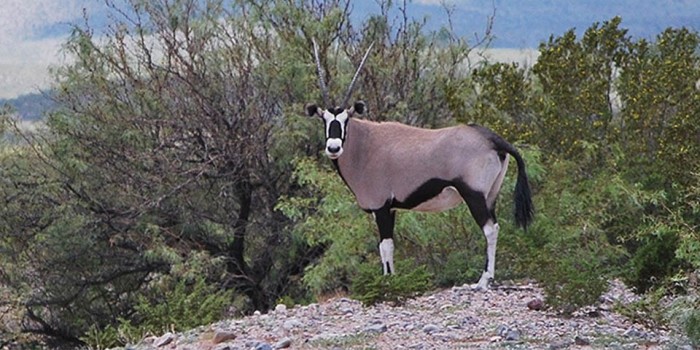 Oryx
The oryx, or gemsbok, is a large, elk-sized african gazelle that prefers desert steppes and savanna habitat. In 1969, a small number of oryx were released on New Mexico’s White Sands Missile Range. Wildlife managers who aimed at establishing a population of a few hundred animals underestimated the degree to which these introduced oryxes would be successful in their new habitat. Oryx breed year-round and their numbers and range grew rapidly. Current estimates place their numbers around 4000 with a management goal of half that number. Hunting is the primary avenue to achieving that goal. Several hundred tags are issued on the federal missile range lands. Off-range hunts are also available on public lands and success rates are high. 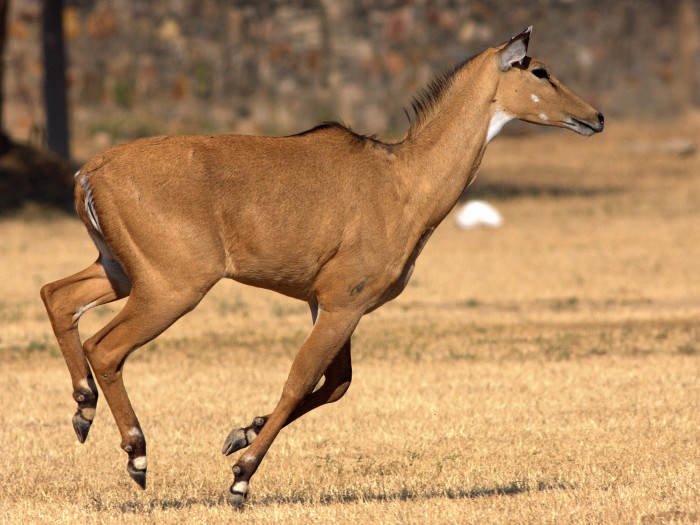 Nilgai
Nilgai, which can exceed six hundred pounds, are a large species of antelope native to India. Brought to zoos in the United States in the 1930’s, Nilgai were then released on large Texas ranches for hunting purposes. The famous King Ranch alone supports 10,000 nilgai. But despite high fences, nilgai managed to escape these ranches and now a wild, free-ranging population exists throughout the marshy, coastal region of south Texas. Texas isn’t known as a state with abundant public land hunting opportunities but Nilgai can be hunted there on some coastal state wildlife areas and a couple of large National Wildlife Refuges. 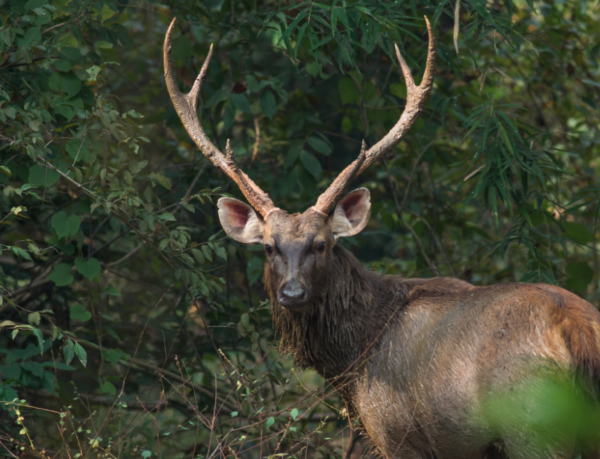 Sambar Deer
Sambar deer are an elk-sized deer species native to southeast Asia where their populations are in rapid decline due to the loss of marshy, wooded wetlands habitat. Sambar deer were introduced to Florida’s St. Vincent Island in the early 20th century alongside many other exotic species when the island served as a private hunting reserve. Eventually, the island was purchased by the Nature Conservancy and became St. Vincent National Wildlife Refuge. With the exception of the Sambar deer and wild pigs, the island’s exotic species were removed. Today, a limited entry hunt for wild Sambar deer occurs every year on the island. Hunters must apply for a tag through a lottery draw to participate in this unique public lands hunt.

Janis explores turkey hunting in his home state of Michigan, a land that barely held turkeys in his youth. The hunt delivers challenges of quiet birds and tests Janis’ patience down to the last moment.

Hunting wild turkeys is both maddening and addictive. Once you’ve got the turkey hunting bug, you’ll happily suffer through day after day of matching wits with giant, paranoid birds that often seem impossible to kill. Due to the inherent challenges of pursuing wild turkeys, hunters have come up with a lot of ways to fool them. During both spring and fall seasons, turkey hunting styles can range from quiet and stealthy to loud and aggressive. Some...