The cow and calf must have thought we were sagebrush in the frail predawn light. We crouched low, motionless but completely exposed, as they sauntered on up out of the gulley not 12 yards away. We waited until they had passed before standing to see which way the rest of the herd was coming.

Suddenly, well beyond a hundred elk began to stream out of two creases of the hillside in front of us. Mostly cows, calves, and spikes, with, notably, one heavy-horned herd bull. But we were pinned down and they were soon past us, moving toward the private land fence line before we could make a move. Finally out of sight, we followed up the shallow gulley behind them. When it came to crawling conditions, I let Jake go it alone while I doubled back. Barely 20 yards into my retreat, I saw ivory antler tips cresting the hill ahead.

The Game is Afoot Like deer, elk behave much differently in the summer before they know they’re being actively pursued. They’re more talkative and willing to spend time in the open. If you can get into the herd before anyone else does, you can be dealing with almost-naïve elk that are just going about their business and not expecting an assault. Their lack of awareness on Labor Day Weekend surprises me every year.

That changes very quickly. Once some sneaky dudes in camo show up in their territory, elk will often move to private land or further up into the mountains. Habits and habitat shift. They know this game but need to hear a starting whistle before they start to play. Be cautious to not spoil that strategic advantage.

Scout from Afar It’s unlikely you’ll kill a bull on opening morning of archery season if you don’t know beforehand where he’ll be. You also can’t kill him if you get too close to his zone during your scouting efforts and blow him out of the county. Luckily, however, elk tend to be a lot more visible in the summer and early, early September than they are during hunting season—whether that’s out in open alpine, mid-mountain meadows, or lowland agricultural interface.

Bring out the big glass and get on a vantage point at first or last light. Elk have twice the body weight and half the agility of bighorn sheep, and thus rarely visit the very pinnacle of a peak or pointy hill. You can watch them safely from such a position, so long as your wind isn’t going their direction.

The year I killed a bull on opening morning, we’d spent several mornings in the preceding weeks hiking to such a glassing tit in the dark to observe a group of elk transitioning from the field they’d graze overnight up into the foothills. No plan survives first contact with the enemy, but it’s always better than not having a plan.

Call Minimally While bulls may be bugling and beginning to jockey for position in the pecking order, the rut often hasn’t started in earnest by the late-August or early-September archery openers in most states. That means the elk are packing on calories and possibly even still carrying velvet.

Yes, young bulls looking to make a name for themselves may come into a challenge bugle or a seductive cow call. But it’s relatively unlikely that they’ll be as hot and bothered as they will in a couple weeks when they start smelling estrus. As previously mentioned, a light touch and wraith-like presence may be advantageous really early on. Save that throat-ripping lip bawl for when it will do maximum damage. Match the energy in the room.

Watered Down With drought conditions across the West, wet water sources will be more relevant this coming season than ever before. Many successful elk hunters I know employ a tactic some folks call “whitetail hunting for elk” that involves sitting in ground blinds or tree stands adjacent to guzzlers, ponds, creeks, wallows, and springs early in the season. That’s not “Elk Hunting” with capital letters in my mind, but maybe I’m just really bad at sitting still when there’s mountains to explore. You can’t argue with the logic or results of a good stakeout.

Even if you’re like me and yearn to take the fight to the opponent, you’d be a fool not to pay close attention to where there’s water and where there isn’t. A good spot to get a drink often forms the hub from which elk activity radiates throughout an area. That may just be a start or the underpinning of your entire game plan.

Dress for Success Last season on opening weekend, we saw both 90-degree heat and a blowing snowstorm. You can’t ever sleep on the serious clothing in elk country.

Luckily it’s easier than ever to make your outerwear your underwear when the weather gets sporty. I can’t remember the last time I went hunting (or fishing) without a Wick Hoody, whether in 10 below or 80 above. Similarly, a packable shell jacket and pants don’t ever leave my pack unless I’m basically staying in sight of the truck. Even then, you never know when a stalk will drag you a mile off or a kill will keep you out hours longer than you intended. Expect the unexpected.

How it Happens Discordant thoughts squabbled in my head as the bull approached:

“Do you really want your elk season to last only 20 minutes?”

“Maybe we could get close to the herd bull tomorrow?”

“Elk for the freezer, deer for the wall.”

“This is all happening so fast.”

“What the hell are you all dressed up for if you’re not going to dance?”

The satellite six stepped up onto the bench without a worry in the world. There were dozens of compatriots ahead and several more behind. The lead cows were doing the lookin’ out for him, and he was probably feeling a bit logy with a belly full of alfalfa.

I drew my bow as I rose from the gulley. Still there was a rise of ground between us, so I took three slow, long steps upward to get flight clearance. The bull kept coming. Still holding back the arrow, I chirped quietly with the Phelps AMP diaphragm stuck to the roof of my mouth since first light. The elk stopped a half second before the arrow slid through his ribcage.

We made a pot of coffee mixed with Swiss Miss and a little Pendleton while waiting for the bedded and bleeding bull to tip over just short of the public parcel boundary. Though my tag remained valid and intact for less than an hour, a September spent calling and glassing for friends without that weight in my pocket provided one of my favorite seasons yet. 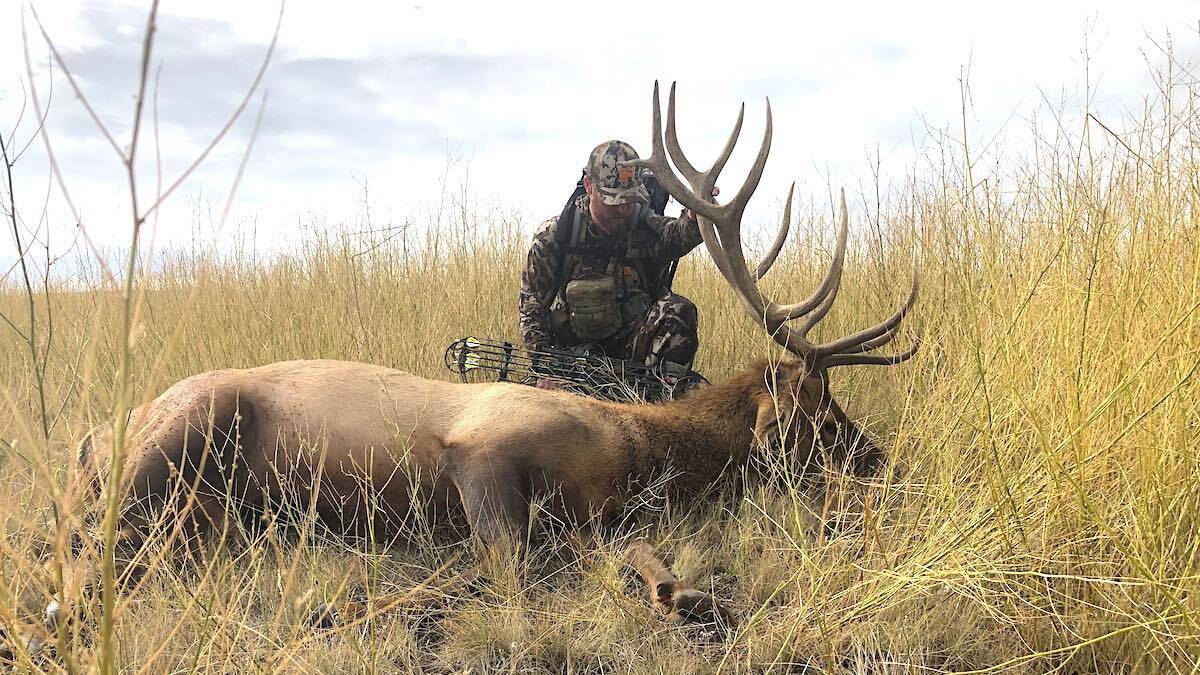 The author with his 2019 opening day bull.

Save this product
First Lite
Men's Wick Hoody
$110.00
An ultralight Aerowool hoody designed for hot weather and high exertion.
Shop Now
Save this product
Phelps
AMP Elk Diaphram Calls
When we need to cow talk as well as mimic intruding satellite bulls, you’ll find us using these calls.
Shop Now
Save this product
First Lite
Omen Stormshelter Jacket
$390.00
The most weatherproof, durable, and contamination resistant rain jacket for unforgiving severe conditions.
Shop Now
Save this product
First Lite
Omen Stormshelter Pant
$380.00
The solution for mid to late-season hunts when persistent varying precipitation, wind, and low temps are the only guarantee.
Shop Now
Get the latest in your inbox
Subscribe to our newsletters to receive regular emails with hand-picked content, gear recommendations, and special deals.
Our picks for the week's best content and gear
For the whitetail obsessed, with Mark Kenyon
Redefining our connection to food, with Danielle Prewett
Your one-stop for everything waterfowl, with Sean Weaver
Get out on the water with the MeatEater Fishing crew
Technical hunting apparel
Purpose-built accessories for hunting and fishing
Quality elk, turkey, waterfowl, and deer calls
Privacy Policy

Video: How to Score a Bull Elk

Scoring a bull elk is quite similar to scoring a deer but with some added complexity due to the sheer length of those much bigger antlers. The total score number will include the inches in the length of the main beams, length of the tines, the inside spread, and the volume of the antlers. And we'll take deductions for inconsistencies like G1 points that are different lengths. I'm an official scorer for the Boone & Crockett Club so I've built an...

How to Kill a Pressured Bull

A public land, DIY bull elk is the white whale for most bowhunters. Sure, you might have a long conversation with one as it bumps its cows up to its favorite north-facing bench, but to get within bow range and run an arrow through his vitals? It isn’t easy. In over-the-counter units, roughly 10% of elk hunters end up packing extra protein back down to the trailhead. The other 90% leave the dark timber exhausted and empty-handed. Typical advice...

This video shows a herd of elk booking it over a fence. Who knows what’s making them move—could be predators, could be hunting pressure, or maybe they just felt like running. The cows and calves make it over the barbed wire with some effort, but they’re moving remarkably faster than the 6x7 bull in the back who is carrying notably more weight. When the big bull trips over the top wire, his brow tines stick into the ground, staking his fate with a...