Bodie’s brown nose scoured the snow-covered ground as he sprang through the sage and locked on point. Pinion circled the edge with a nose full of scent. Connor and I moved with all the hustle our raw feet would allow. This was our last chance to get a flush for the next eight months.

Our sprint into place quickly turned into a tightly-gripped stalk of anticipation as we approached the dogs. We positioned downhill on an angle for clear shooting lanes. Snow crunched under our boot soles as they rolled from heel to toe. 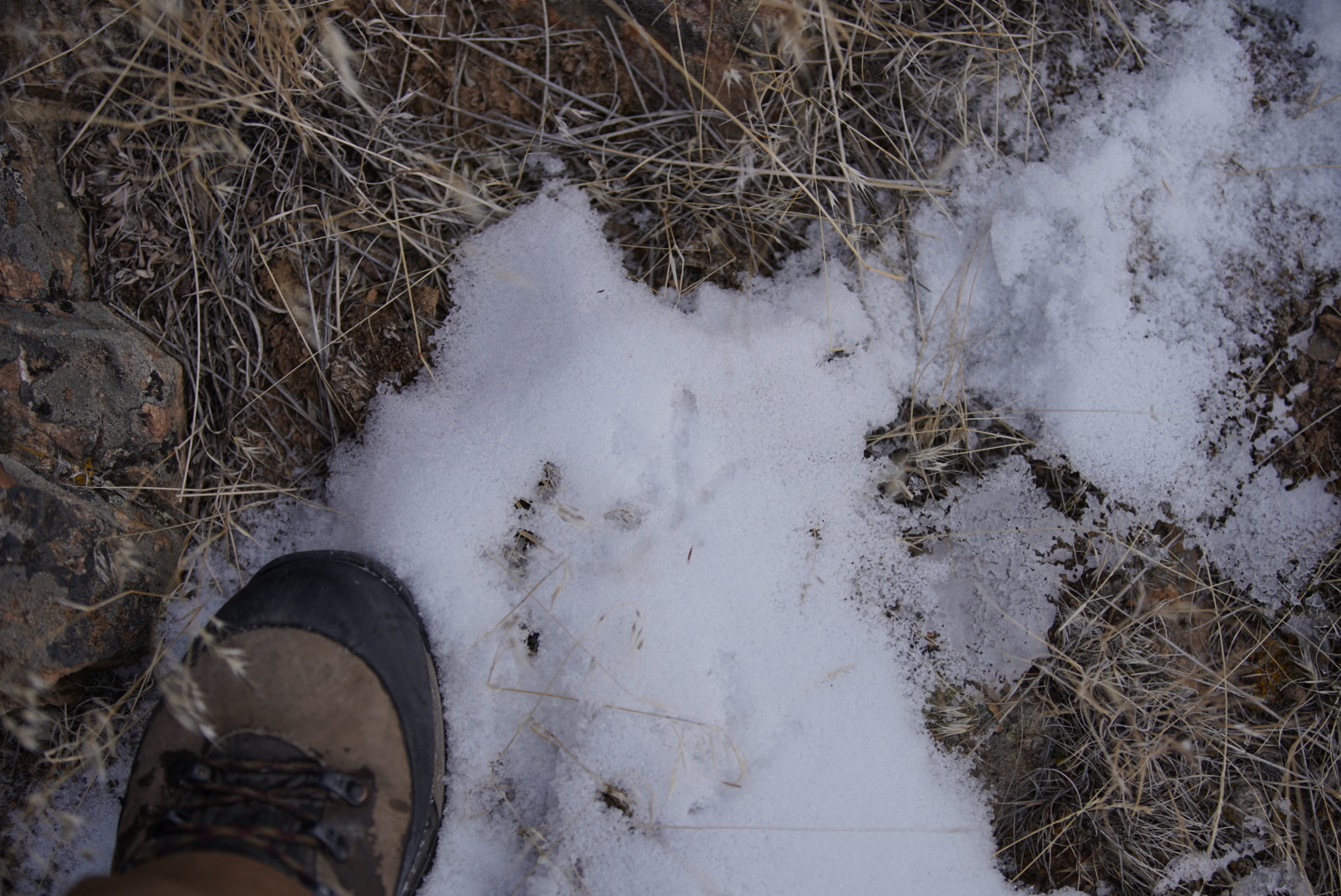 Chukar wings grasped at air, beating the breasts of birds and surrounding sage as the aerial evasion exploded in front of us. The golden light of the setting Idaho sun silhouetted the birds above the brushy hillside, showcasing an avian firework display.

For a moment, flashes of Kansas quail coveys from this fall’s hunts filled my mind. My brother Joel and I set up for the flush in front of a pointed dog, as we’ve done for the past 20 years. Dogs were in place, birds were holding and the shotguns sang when the covey took wing. These Kansas fields, where I grew up and started hunting, were the launching point for my wire-haired pointing griffon, Pinion, to cut his teeth on wild upland birds. His littermate and brother, Arlo, came down from Montana and was delivered to my brother. These shaggy brothers tagged along with Joel and I as we walked familiar fields, exploring with the eager eyes and nostrils of first-year bird dogs. 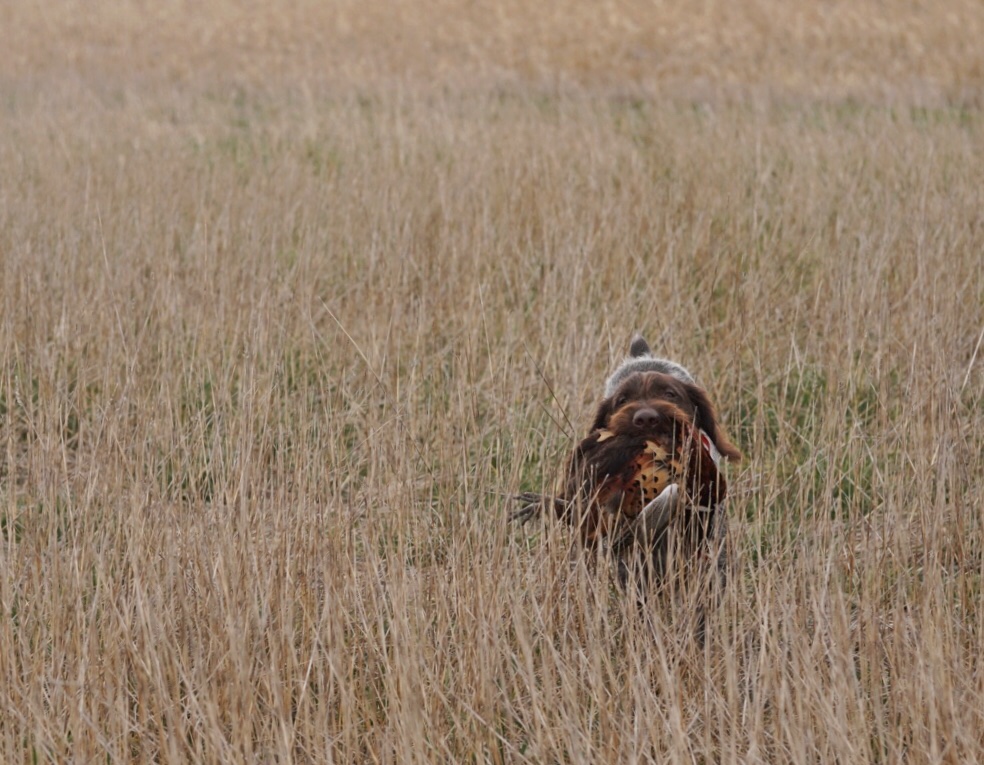 That Kansas reflection soaked in my mind long enough for a smile to form on my face as the chukar hovered in the air in front of me. The Model 59 snapped into place and I swung the short barrel. My finger wrapped around the trigger and squeezed. Two red plastic shells wrapped in high brass fluttered to my right. A single chukar quickly dumped in the sage, followed by a late flushing bird that chose to go straight up in the air and softly break over my left shoulder—a chip shot that provided the easiest bird for the dogs to find.

Gunpowder infiltrated the crisp evening air and filled my lungs. The smile grew wider as I collected my double. They were my only birds of the three-day trip. 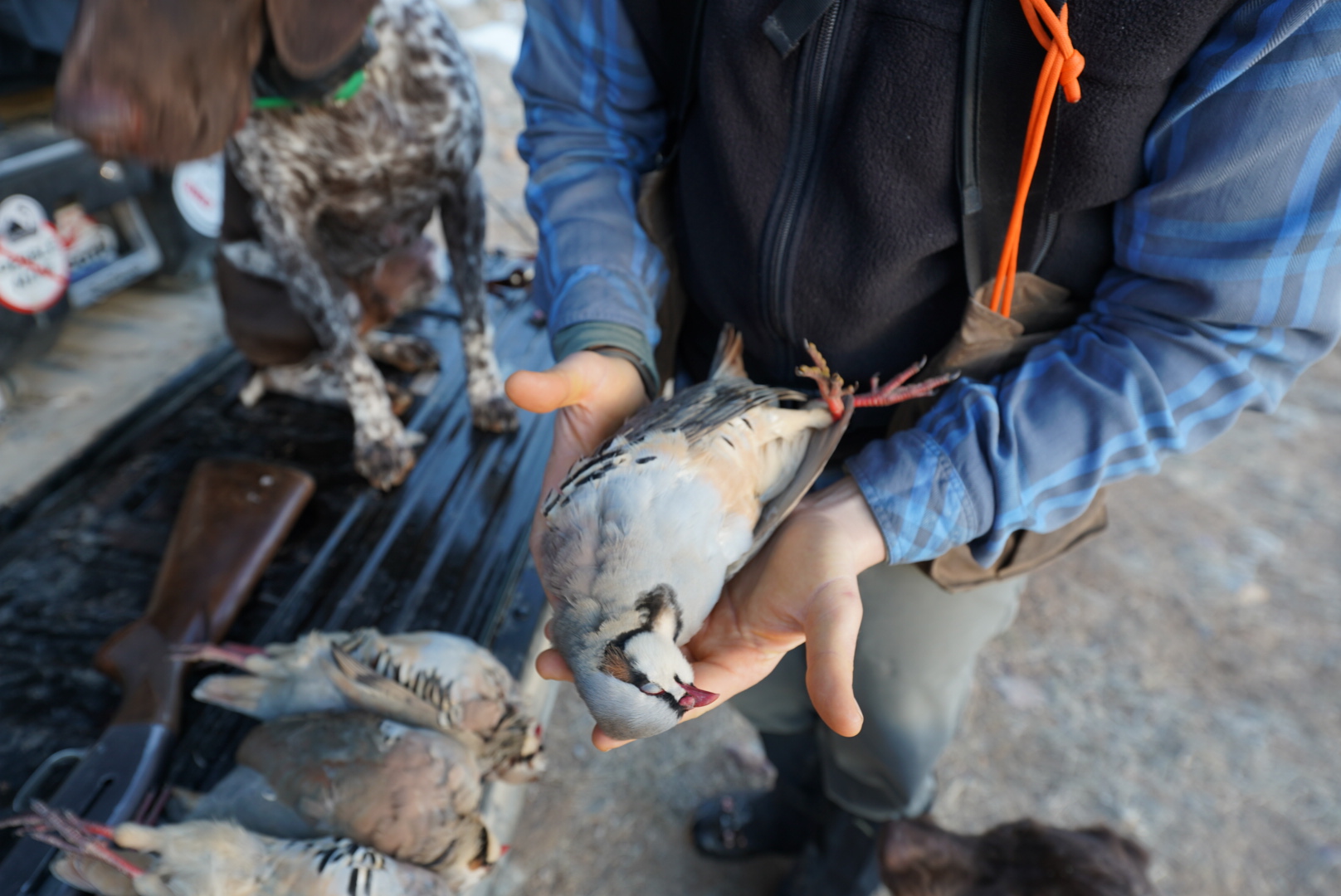 This little sliver of time was the culmination of the first season for my pup, Pinion. A strong season opener on roosters in Nebraska was followed by navigating plum thickets and hedgerows for coveys of bobwhite quail. The same for Connor’s German Shorthair Pointer, Bodie, who ended on the exceptionally high note of a grand slam bird season. 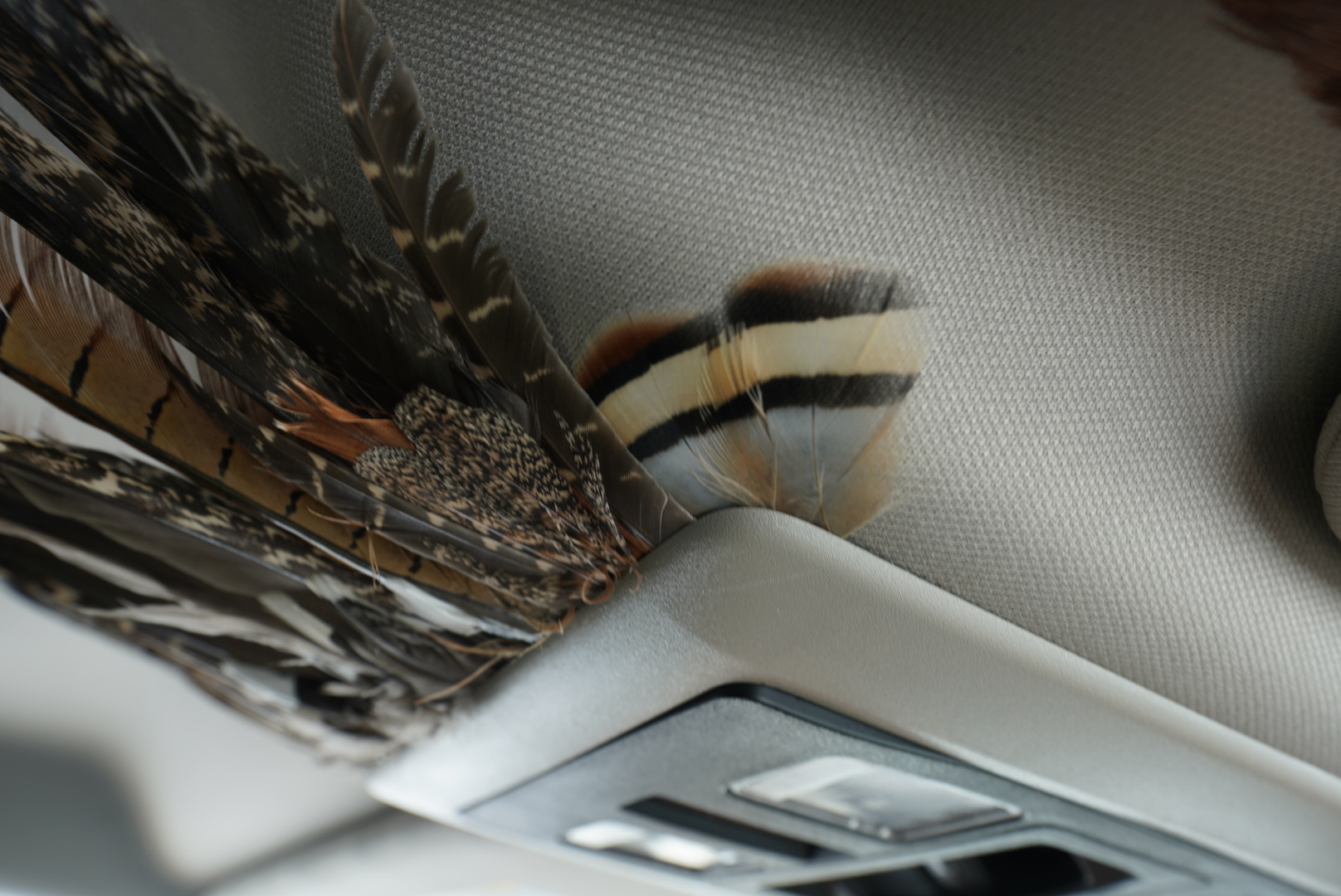 I have to give him credit: Connor is the reason we were on this Idaho hillside location. Friends suggested locations in proximity, but Connor’s pre-scouting work landed us in this spot. Technology and e-scouting are a blessing when all you really need to find is the perfect blend of public lands and south-facing slopes with enough vert to make you think twice about the effort. This was Connor’s angle and it worked.

We left Bozeman with numerous pins dropped in onX maps for promising locations. The more we ventured to each spot, the more disappointment set in. From previous research, we knew chukar populations in this area had suffered catastrophic losses in the ’16-’17 winter. Some spots declined up to 95 percent. One of Idaho’s conservation officers explained this to us on a chance encounter while fueling up. This officer got a questionable look in his eye once he found out how far we drove to chase the decimated bird populations in these rugged hills.

“You got a map on you? Lemme point you in a few different directions,” Officer Cook said. 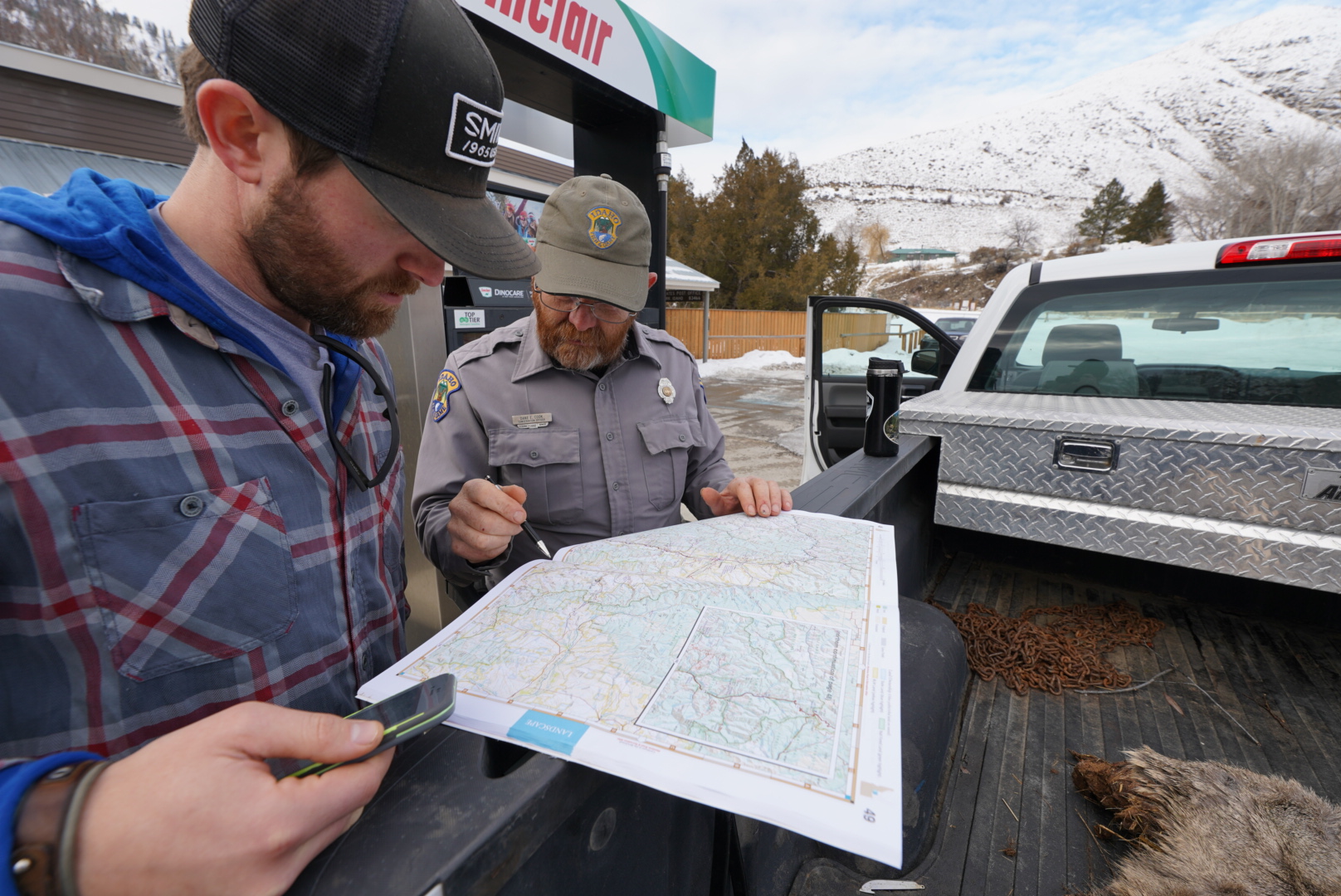 This helpful encounter wasn’t the first. We scribbled down a variety of suggestions from gas station attendants, bartenders and a motel operator. “Ya know, it’s pretty rare that locals eagerly help and giving up hunting spots,” Connor said. “You never find that with other styles of hunting, but I guess chukar hunting is different here.”

We reviewed the notes with an eye for legitimacy and starred locations to visit further down the line. Time was limited for this round and it was clear going into this mission that hitting it rich with daily limits would be a lofty goal.

The promise of one last outing with our pups and the adventure of exploring a new location was all we needed, though. But this exploratory mindset was not without a critical eye. This first season was all for Pinion. Dog trainers emphasize allowing pups to run free with minimal corrective actions to emphasize the fun to be had in the field. I constructed a checklist all season, watching for strengths and weakness.

A variety of training exercises to research and implement have been on my mind. Just as the blade always needs to be returned to the stone, bird dog pups will need their off-season training regimen. The thoughts were collected and stowed away into the back of my mind like the gear piled into the back of the truck. For now, all I needed was a handful of Ibuprofen to wash down with a few cold ones.

The cans of beer in our hands clinked together as we smiled and nodded. The 2018 season ended on the high note of a last chance covey among friends on a newly discovered hillside. 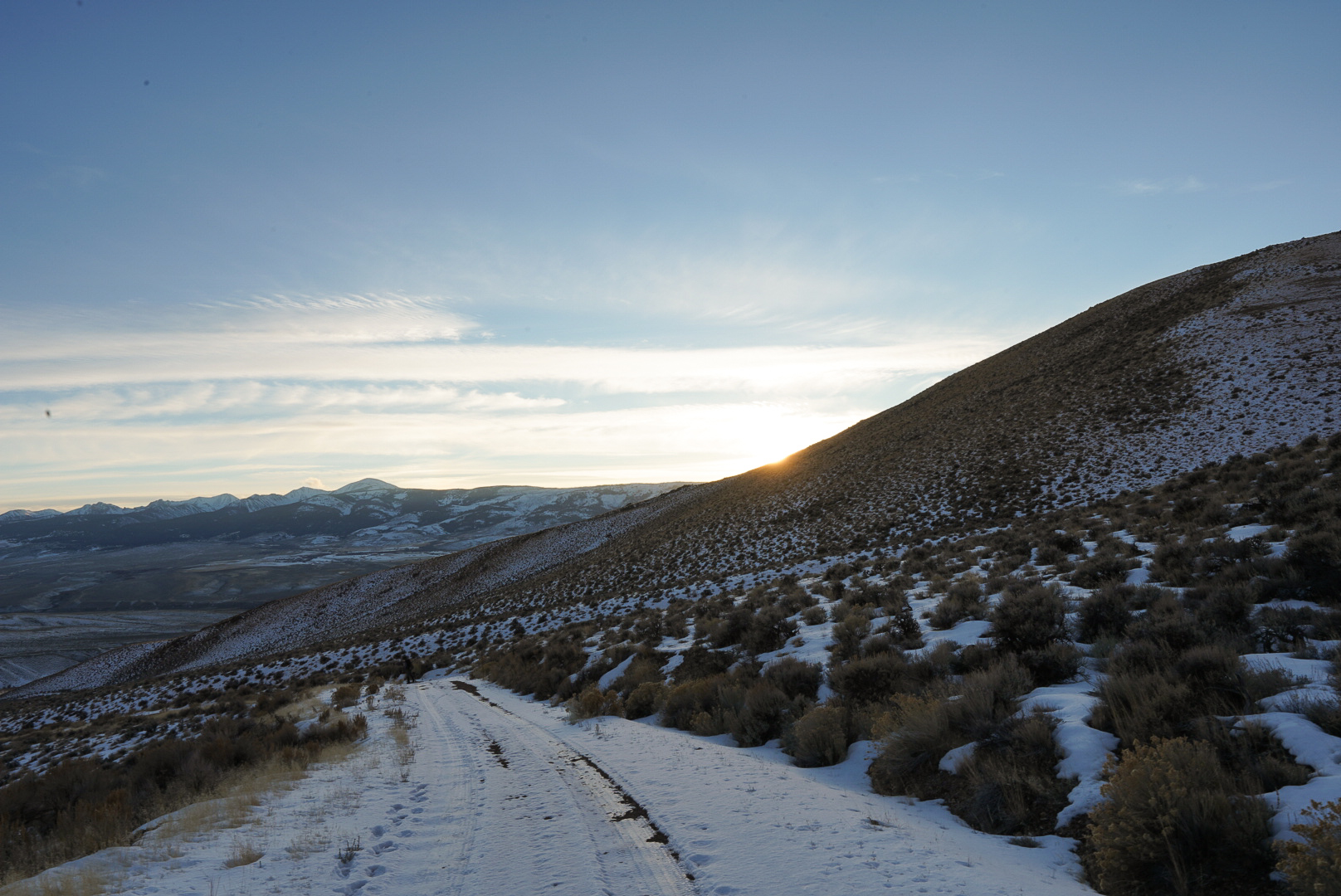 Save this product
Benchmade
Steep Country Knife
$162.00
A versatile fixed-blade capable of performing throughout any season, on any species.
Shop Now
Save this product
Vortex Optics
Diamondback HD Binoculars 10x42
$249.99
Rock-solid optic that optically punches high above its class.
Shop Now
Save this product
Vortex Optics
Razor HD LHT 3-15x42 Riflescope
$1299.99
"The LHT has become my go-to scope for nearly every hunt. It’s lightweight for easy backcountry carry, yet has the glass quality and exposed turrets for precision shooting from sunup to sundown." - Janis Putelis
Shop Now
Coming Soon
Save this product
FHF Gear
FOB Bino Harness
$185.00
The FOB Bino harness is a fully enclosed forward-operating bino harness, that serves as a secure location for binoculars and other critical gear during your outdoor pursuits.
Shop Now
Get the latest in your inbox
Subscribe to our newsletters to receive regular emails with hand-picked content, gear recommendations, and special deals.
Our picks for the week's best content and gear
For the whitetail obsessed, with Mark Kenyon
Redefining our connection to food, with Danielle Prewett
Your one-stop for everything waterfowl, with Sean Weaver
Get out on the water with the MeatEater Fishing crew
Technical hunting apparel
Purpose-built accessories for hunting and fishing
Quality elk, turkey, waterfowl, and deer calls
Privacy Policy

Mid-fall is setting in across the country. The vibrant greens in the landscape are now turning to yellow, orange, and brown hues across the mountain west and midwestern prairies. It’s time to get your favorite gun dog out of the kennel and out into the field. What can upland hunters expect this year other than long walks? To help answer this question it’s always a good idea to look at data and insights offered up by organizations like Pheasants...

On this hunt, Steve meets up with his longtime friend and upland bird hunter extraordinaire, Ronny Boehme, to search for an icon of the American West, the sage grouse. But before they start hunting, they’ll discuss the conservation issues surrounding this embattled species with the governor of Wyoming, Matt Mead. Out in the field, Ronny’s best dogs are there to help the two find a big, mysterious game bird that’s hiding out there somewhere in the...

The Demise of Ruffed Grouse Hunting

The image of a hunter swinging an old side-by-side shotgun towards a ruffed grouse flushing over a bird dog is synonymous with American hunting history. Ruffed grouse were once a very popular, plentiful upland game bird throughout much of the country. Not too long ago, in a lot of places, you were more likely to hear a male grouse drumming than a wild turkey gobbling during the spring breeding season. These days, it’s a different story for both...