The Best Hunting Tripods for Glassing and Shooting

Most folks who hunt open country will have the epiphany someday: You aren’t really seeing without a tripod. You may be looking through your binoculars while they’re supported by your knees or shoulder tension, but at any sort of range you’ll skim right over a lot of semi-hidden animals as your lenses fluctuate with your breathing.

That epiphany will someday be followed by another one: a quality tripod makes a huge difference too. Sticky pan and tilt in the head, flimsy leg locks, a light frame that wobbles in the wind—not all optical supports are created equal. Just like with rifles, bows, and optics, you generally get what you pay for. An investment in your equipment pays dividends in your comfort and enjoyment of hunting.

Jump to: The Tripods We Use

What We Look for in a Good Tripod

There are many offerings on the market these days, so it can often be tough to parse the right tripod fit for your hunting style and budget. Here are the major factors we consider:

Jump to: What Makes a Good Tripod

The Tripods We Use

What Makes a Good Tripod for Glassing and Shooting

You likely have a tripod laying around the house from an old camera kit or other purpose. Those will function, but it’s pretty hard to beat a three-leg built with only hunting and shooting in mind. For wilderness purposes, engineers consider wind, uneven terrain, heavy optics, rifle recoil, weight, and several other factors that camera shooters often don’t deal with. Here’s what we consider when choosing a tripod.

These first two items increase in direct proportion to each other: More weight generally equals more stability. Less weight hurts your back less but reduces stability in wind or with heavy optics. It’s the inherent battle in choosing a tripod, and the trick in finding one to perfectly suit your needs. Go too heavy and you’ll want to cast it aside halfway up the mountain; too light and you won’t have a clear sight window.

Again, weight creates stability, but it’s not the only factor. Materials make a difference too—aluminum has a lot more rigidity than plastic, for example. Likewise, the design and construction of the leg pivot points can either lock in firmly or squirm around under the weight of an 85-milimeter spotting scope. The security of the leg lock mechanisms will also affect the overall stability of your rig, especially if you like to lean on the tripod a bit to keep the wind from moving it. You can’t get away with pushing half your body weight onto a light, cheap tripod. You can with a really good one.

Many tripods only allow the legs to fold out to one specific angle. That’s fine on a hardwood floor, but may not serve you well when your body is folded into broken rimrock and you’re trying to glass for several hours. The ability to set the legs at various angles and raise the centerpost can allow you to glass comfortably without holding your body in awkward positions. Likewise, the mechanism for extending the legs can factor into personal preference for one tripod over another. Lever locks may be more secure, but twist locks are likely easier and faster. Above all, you want a tripod rig that feels cognitive and natural or you’re not going to use it as often as you should.

This refers to the head rather than the tripod itself. When you’re scanning a landscape for game, you want your glass to be able to swing naturally with your eyes. Unfortunately, that’s not the case with most cheap tripods. With simple plastic heads, you’ll often notice a catch in the swing. High-end plastic heads get rid of that problem in large part, but if you really want a silky-smooth pan and tilt, you can’t beat a fluid head meant for videography. Those are going to be heavier, but the glassing experience will be much more enjoyable. 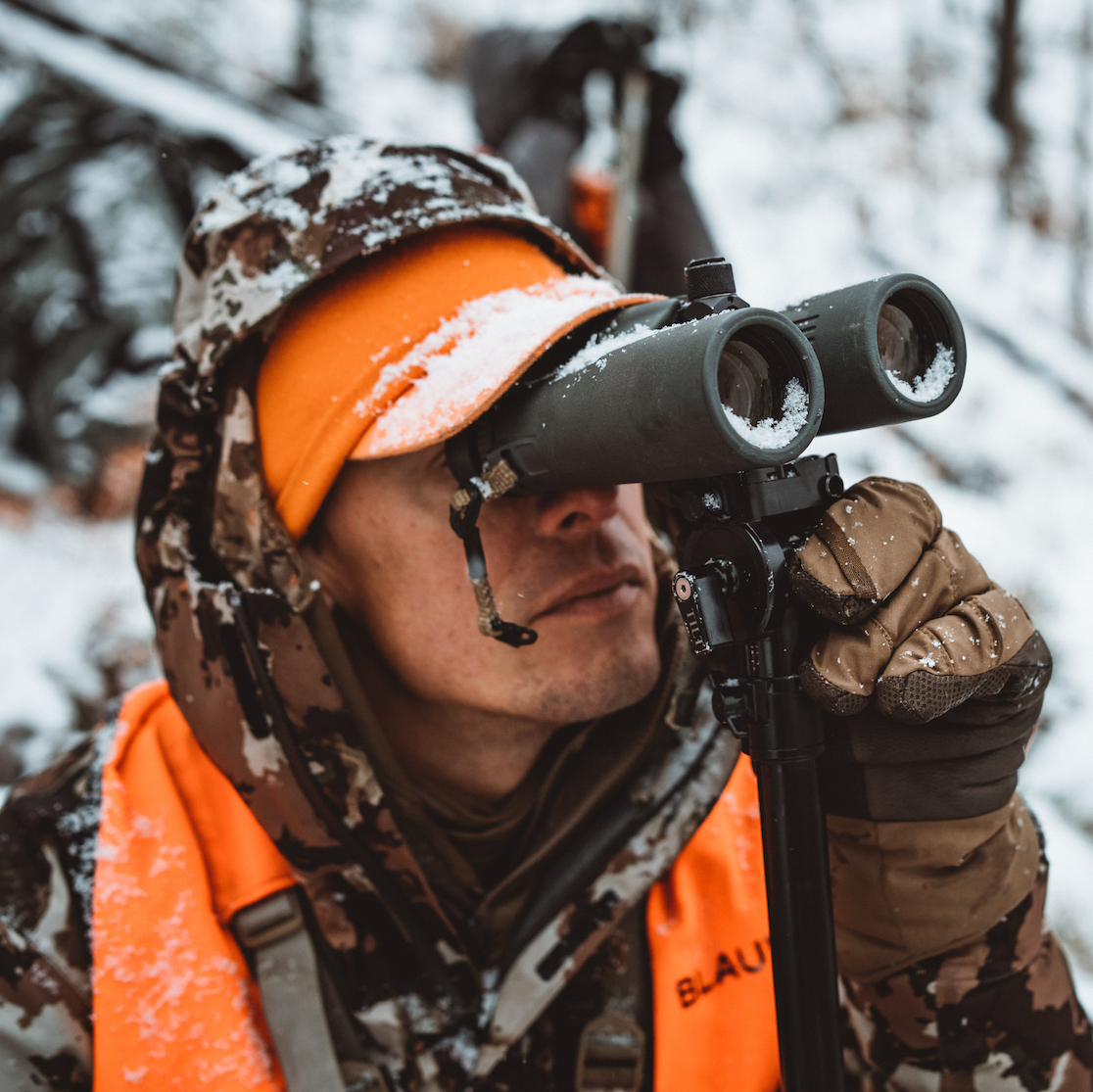 MeatEater’s founder is not known for pulling punches. He loves his long-time glassing rig and he’s not afraid to show it: “I’m pretty adamant about using my Outdoorsmans tripod with their pan head. Some people say they’re too heavy, or too noisy, but those people are stupid,” Steve said. “In fact, my tripod is so rugged and well-built that I could beat those people into tomorrow with it and the tripod wouldn’t show any wear and tear. I’ve used one for seven seasons of very hard use and it’s still in perfect shape. I pair that thing with my binos, spotting scope, and rifle rests. It’s a work of art.”

Ryan Callaghan is in the same boat: “I’ve been using the Outdoorsmans tripod for the last 10 years. I only had to send it in for repairs once when Chester drove over it in his truck. It’s been on planes, rafts, mules, and involved in more backpack tumbles than I care to admit. The Outdoorsmans is not the lightest tripod option on the market, but I have yet to find any others that can take that much abuse and stand up season after season.” 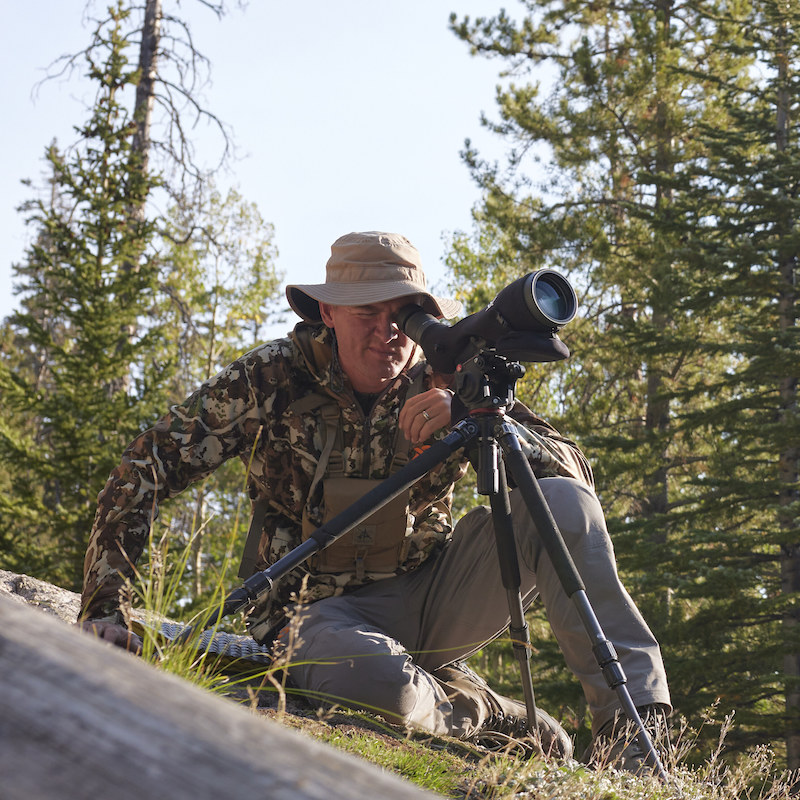 Tripod: $199.95 | Pan Head: $169.99
“In my opinion, carbon fiber is a must for lightweight, but maybe more importantly, for the quieter sound compared to aluminum.”
Janis Putelis

The Latvian Eagle earned his reputation and appellation from an uncanny ability to spot animals. But a glasser is only as good as his glassing platform.

“I've been using the SLIK Pro 713 CF for 15 years for everything from elk in Montana to Coues in Mexico, and it shows no signs of stopping,” Janis said. “In my opinion, carbon fiber is a must for lightweight, but maybe more importantly, for the quieter sound compared to aluminum. The 713 is no longer available but the 733 is a good replacement. I use a Manfrotto XPRO Two-Way fluid head on top of the SLIK legs. The total weight is around 4.5 pounds. There are lighter setups, but I like the stability that the heavier setup affords me. No matter how good your glass is, it's going to be blurry if it's shaking in the wind.” 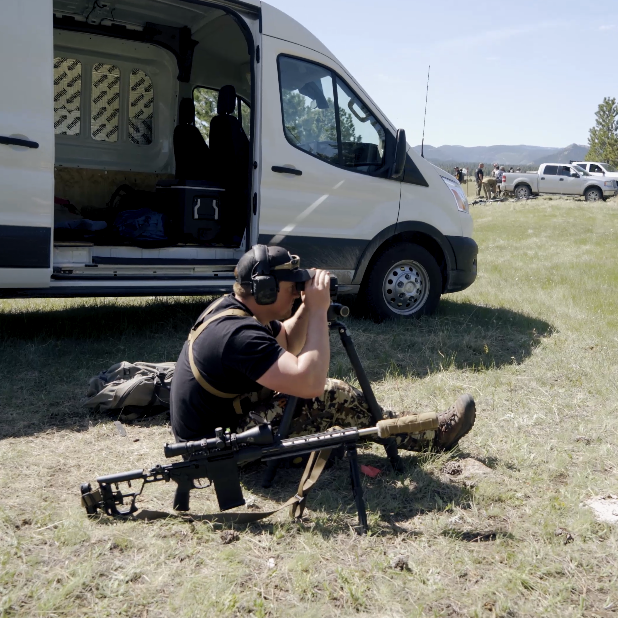 Garrett Long is a competitive shooter as well as an avid Western hunter. He tries to balance the requirements of a rifle rest with those of a binocular support, and he lands on the Vortex Ridgeview.

“It's a great combination of weight and stability,” Garrett said. “Too often I've carried light tripods that don't provide that steadiness I need on a windy mountain ridge. I also like to shoot off a tripod using an Arca rail adapter. A slightly heavier tripod keeps the gun down on recoil so I can maintain sight picture.” 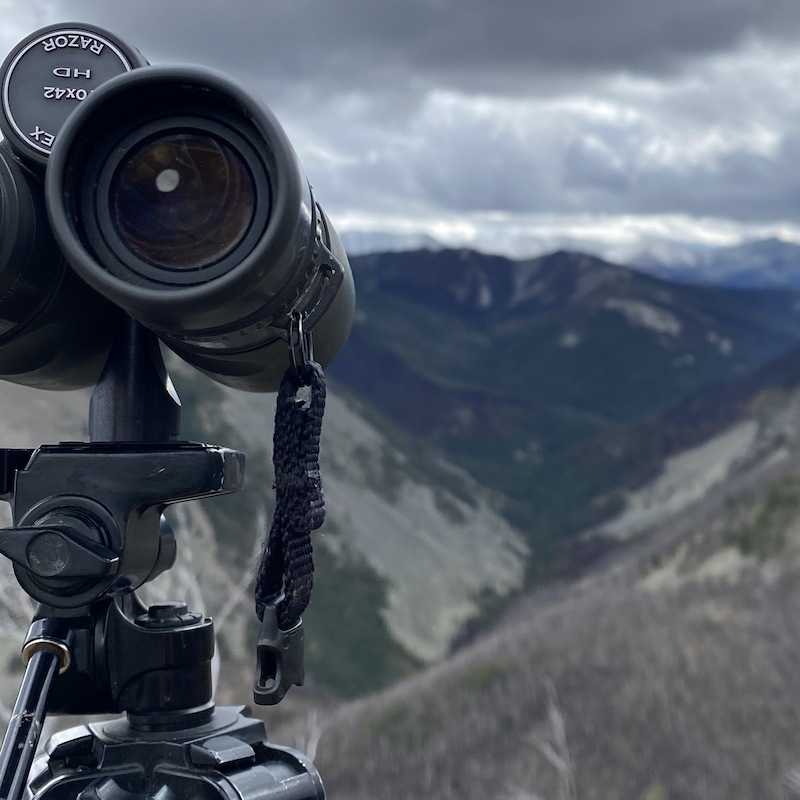 My basic hunting strategy revolves around getting further into the mountains than most other folks are willing to go. For those purposes, I lean toward gear I can forget is even in my pack. Believe me: you won’t forget that you’re carrying a 5-pound tripod rig when you’re 12 miles back and 4,000 feet above the truck.

For that reason, my original Vortex Summit SS-P lived in my backpack for many years. I replaced it last year with the even-lighter carbon fiber model. I’ll bring my Outdoorsmans when I’m expecting heavy wind or planning to use a big spotting scope, but the Vortex Summit is the clear choice for keeping backpack weight minimal on big backcountry trips.

Save this product
Outdoorsmans
Standard Tripod

Save this product
Outdoorsmans
Pan Head

The workhorse of the Outdoorsmans tripod heads, the Pan Head was built to be lightweight but carry a load.

When every ounce in your pack out counts, count on Summit Carbon II to keep you moving without sacrificing stability.

For higher performance at higher heights and features to get low when you need it, Ridgeview Carbon is designed to set a new standard in stability.

Along with hunting pants, jackets are the other cornerstone of a gear system. Your jacket does the most work to keep your core insulated. It can also provide important wind and moisture protection for your torso, as well as useful pockets for storing gear or un-numbing fingers. Some jackets are very simple, but many of the best ones specifically designed for hunting have come to contain useful features such as hoods, masks, vents, oversized...

The Best Material For Hunting Clothes

We’ve all been there. You shiver out of your sleeping bag and pile on layer after layer of clothing. You sling your pack on your shoulders, affix your gun or bow somewhere stable, and look up at the elevation you must gain to reach your glassing spot. Then you start climbing. Sometime after the first 15 minutes, the first bead of sweat trickles down your spine. Another one escapes from under your hat down your temple. A third and fourth collect...

More than any other single item of gear, your pants will make or break a hunting trip. If they’re too tight or too baggy, you can’t walk right. Too thin and you’re cold; no ventilation and you’re hot. A lot of hunters struggle for years to find the best hunting pants for their body shape and hunting habitat. In this article, we'll go through the factors we consider when choosing a hunting pant, and the pants that hit high marks on those factors...