In Pursuit of the American Native Trout Grand Slam

Before the European settlement of North America, over 25 species of trout and char thrived in what are now the western states. We unfortunately lost a few of them due to habitat destruction, invasive species, and all other manner of things that came with colonization. But most still prevail and you can find them in the headwaters of their historic ranges if you know where to look and are willing to put in the effort. They may not get as big as they used to, but what they lack in size they make up for in unparalleled beauty.

Growing up in Mississippi, trout and char, much less fly fishing, might as well have been on a different planet for me. The only rod I knew was the 13-foot graphite pole I used to jig and troll for crappie, which were the only fish my old man had any interest in eating. A friend introduced me to the world of fly fishing after college. I caught a stocker brown my first time out and I was hooked.

Living in Tennessee at the time I began targeting different native fish on the fly, as the state boasts the one of the most biodiverse fish population in the country. I fished for largemouth, smallmouth, redeye bass, all species of bream, muskie, brook trout, catfish, and many others. I was fascinated with targeting native species—to hold each one and observe at their colors and patterns forced me to contemplate the impacts humans have made on their ranges and survival.

One summer, I jumped at the opportunity to chase native cutthroats with an acquaintance. During those few days I learned of the different subspecies of cutthroat in the West and I quickly realized that one week of paid vacation wasn’t going to cut it.

What follows are a few stories of my adventures chasing these fish and a little background about a few of the rarer species themselves. Let’s start with one of the hardest to find.

The Gila Trout The Gila trout (Oncorhynchus gilae) is widely considered one of the rarest fish species in the United States. Its historic distribution is not known with certainty, but it is known to be native to higher elevation streams in portions of the Gila River drainage in New Mexico, the San Francisco River drainage in Arizona and New Mexico, and tributaries to the Gila River in Arizona. By the 1950s, its range was reduced to only four streams in the Gila River headwaters in New Mexico. The species was listed as federally endangered in 1967. After successful efforts to restore populations, the Gila trout was reclassified in 2006 as threatened.

The species has been restored to a healthy-enough population to fish in one stream in Arizona and four streams in New Mexico. I decided to chase these rare fish in the Gila National Forest of New Mexico.

It was slow going at first, and I was starting to get worried after an hour or so of not finding fish. But, with enough hiking, I found the biggest plunge pool in the creek and started making casts. I was getting swipes at my fly but couldn’t get hooked up, which was promising but still not a fish in the net. I soon figured out that these Gilas were extremely small, so I took my fly, trimmed off a bit of the foam, and that did the trick almost immediately. Getting to hold one of those finely-spotted, olive-backed, golden fish was a real treat and began my adventure in earnest.

Bonneville Cutthroat Bonneville cutthroat (Oncorhynchus clarkii utah) were historically found in the Bonneville Basin. That watershed started as Lake Bonneville, a late Pleistocene-era paleolake that covered much of what is now western Utah. At its highest level, this huge lake created suitable fish habitat in the basin portions of Utah, Idaho, Wyoming, and Nevada. Although it was once believed that any pure strains of Bonneville cutthroat were extinct, a few isolated populations were discovered in Utah in the 1970s. Biologists made finding more a priority. 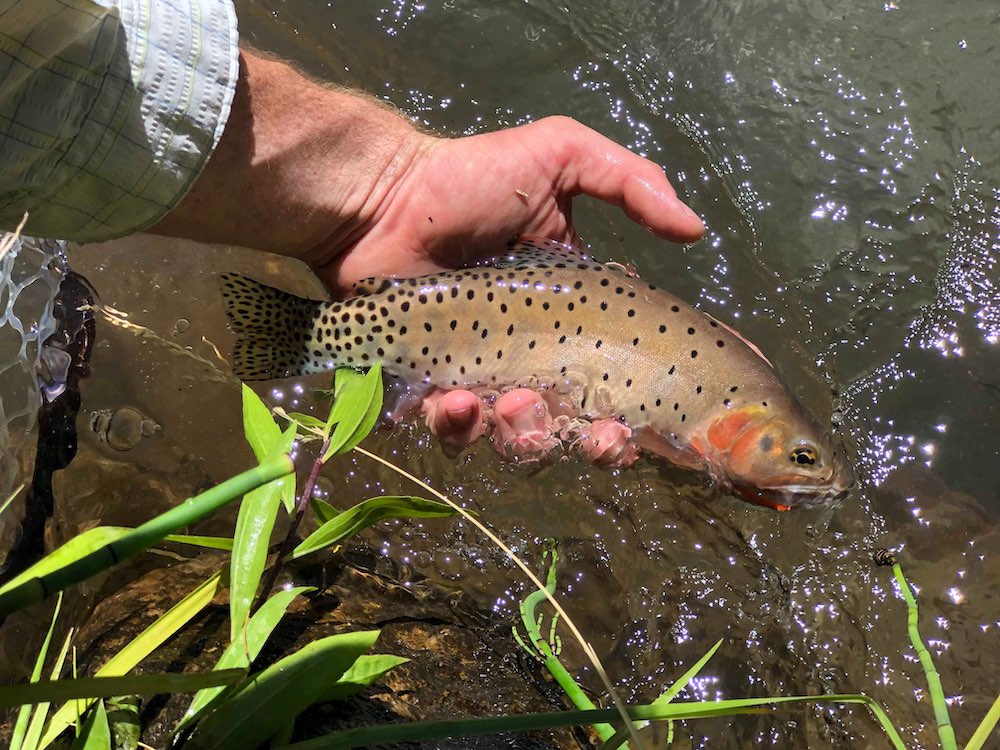 After an aggressive, coordinated recovery effort, there are now 202 Bonneville cutthroat populations that occupy 2,728 miles of stream in 21 watersheds across Utah, Idaho, Nevada, and Wyoming. To find these fish, I got in contact with an acquaintance over social media and we decided to meet up at a secret spot he knew held an incredibly healthy population of fish.

We shook hands, rigged up, and walked down to the creek. Southern Utah is a hot dusty sandstone desert but out of nowhere this raging, cold, clear creek was erupted from the sagebrush. We ducked down into the thicket and, with my first cast, I hooked up with an absolute football of a Bonneville. I was astounded by the big black spots sparsely coating its golden-blonde body and its pink rose cheek. We snapped pictures and released the fish back into a small eddy.

We continued down the road, stopping at every little hole in the thick brush we could duck into. We got a few more fish, including a lunker. After fishing, we headed to Vegas where my new friend graciously let me shower and crash at his place. We stayed up until the wee hours of the morning chatting like schoolboys at a sleepover, discussing our love for these fish that many people never get to see.

Bear River/Lake Cutthroat I went back to Utah, this time to the northern end of the state. I met up with another social media acquaintance involved with the Western Native Trout Initiative. Being a fisheries biology student, he had a little more insight to the more nuanced subspecies. These fish haven’t been officially recognized as separate subspecies but probably will be sooner or later. One of these lesser-known fishes is the Bear River (or Lake) cutthroat trout.

These fish have an interesting history. Even though their present-day native waters, the Bear River, flows into the Great Salt Lake within the Bonneville Basin, these fish evolved on a separate path from Bonneville cutthroat. Geological evidence shows that the course of the Bear River changed and at one time was connected to Bear Lake and the Snake River drainage. Due to this, the Bear River/Lake cutthroat probably share an ancestor with cutthroat trout of the Snake River and Yellowstone drainages.

We piled into my truck one afternoon and headed up a canyon to one of the few creeks that are home to these interesting trout. We rigged up and entered a gin-clear, ice-cold creek, covered on both sides with thick willows. I made a few drifts and got a few hits but was never able to connect. We eventually came to a fantastic looking run. The water flowed into a giant pool with a downed tree in it, providing great cover for small-stream trout. I crept up into a good casting position while staying low, checked my backcast, laid out a good cast with my tiny purple haze dry fly, and within a few seconds, a fish smashed my fly with a reckless ferocity reminiscent of brook trout.

What I got to see was one of the most gorgeous cutthroats I’d laid eyes on all summer. It had a light olive back that melted downward into the most subtle rose pink lateral line stripe with parr marks you could almost miss if you weren’t looking for them. The pink lateral coloration transitioned to a honey-colored and white belly. Covered in increasingly larger spots from the nose to the tail with the rose cheek and bright orange slash under the throat, it truly was a sight to behold. I felt fortunate to see a fish species that, I would imagine, not many people get to see in their lifetime.

A lot of conservation talk revolves around restoring ecosystems to their former glory, or bringing back grizzly bears, wolves, and other charismatic megafauna. But I don’t see as much fervor around the fish swimming the remote corners of the wilderness. I think it’s because you just don’t see them while hiking around. They’re in a completely different realm than we are. You have to work a little bit harder to see these gems firsthand.

Author John Gierach once described the fish as: “One hell of a lot prettier than they need to be.” They belong on the landscape just as the megafauna, and they need protection now more than ever. It was only due to work done by countless state biologists, volunteers, state agencies, and organizations like the Western Native Trout Initiative that I was afforded the opportunity to catch 20 different species of salmonids. I hope reading my stories and seeing pictures of these amazing fish inspires you to get out there this summer, seek out wild trout, and, in turn, become even more passionate about conservation.

Fishing
Get the latest in your inbox
Subscribe to our newsletters to receive regular emails with hand-picked content, gear recommendations, and special deals.
Our picks for the week's best content
For the whitetail obsessed, with Mark Kenyon
Redefining our connection to food, with Danielle Prewett
With Joe Cermele and Crew
Technical apparel for the avid hunter
Purpose-built accessories for hunting and fishing
Quality elk, turkey, waterfowl, and deer calls
Privacy Policy

Trout are inarguably among the most popular game fish family worldwide, if not the most popular. Perhaps one reason for that fondness among anglers is the myriad lures, flies, baits, and techniques that can be employed in pursuit of these fish. There are the standard standbys that will likely work for almost any species in any place, and there’s regional peculiarity tackle that might only function is highly specific environments. Trout and char...

MeatEater Opinion: The Ethics of Fishing for Spawners

Springtime is spawning season for a plethora of game fish species. From bass and bluegill to trout and steelhead, anglers all over the country are gearing up for some of the best fishing of the year. Whether your goal is just to bend a rod or to fill the stringer with a full limit, the spring spawn offers anglers the best chance to do both. But certain segments of the angling community question the ethics of targeting spawning fish. For eons...

MeatEater Has a New Fishing Show!

When you’re a passionate angler living in a crowded state—in my case, one stereotyped as the land of highways, malls, and refineries—you have two choices: Move out or adapt. I chose the latter—finding fish, serenity, and beauty between the Olive Gardens and Costcos in Dirty Jersey. I specialize in underappreciated or surprising fisheries, locations, and people, and my new series, “B-Side Fishing,” gives me the opportunity to do what I do best...