How to Catch and Eat the Delectable Brook Trout

When I was a kid, dreaming of becoming a mountain man, brook trout were the first real test of my mettle. Every day after school I’d walk down the stream behind my house with a hook and line tied to a stick to pull brookies from the water and string them by their gills onto my “rod.” Once I had my limit, I would build a fire on the side of the stream and fry the fish to a golden crisp in a cast iron pan stolen from my mother’s pantry.

I always brought a bag of Wonder Bread with me, which now seems an incongruous item for a mountain man to possess. To a 10-year-old, everything tastes better in sandwich form. However, I bet that even Jeremiah Johnson would have chowed down on some of those soft slices if they’d been available. After slathering two pieces of bread with mayonnaise, I’d slap on the fried trout and sit with my feet in the water, eating the sloppy sandwiches and contemplating my wilderness trapping future while grease dribbled down my chin. It was a grand time. 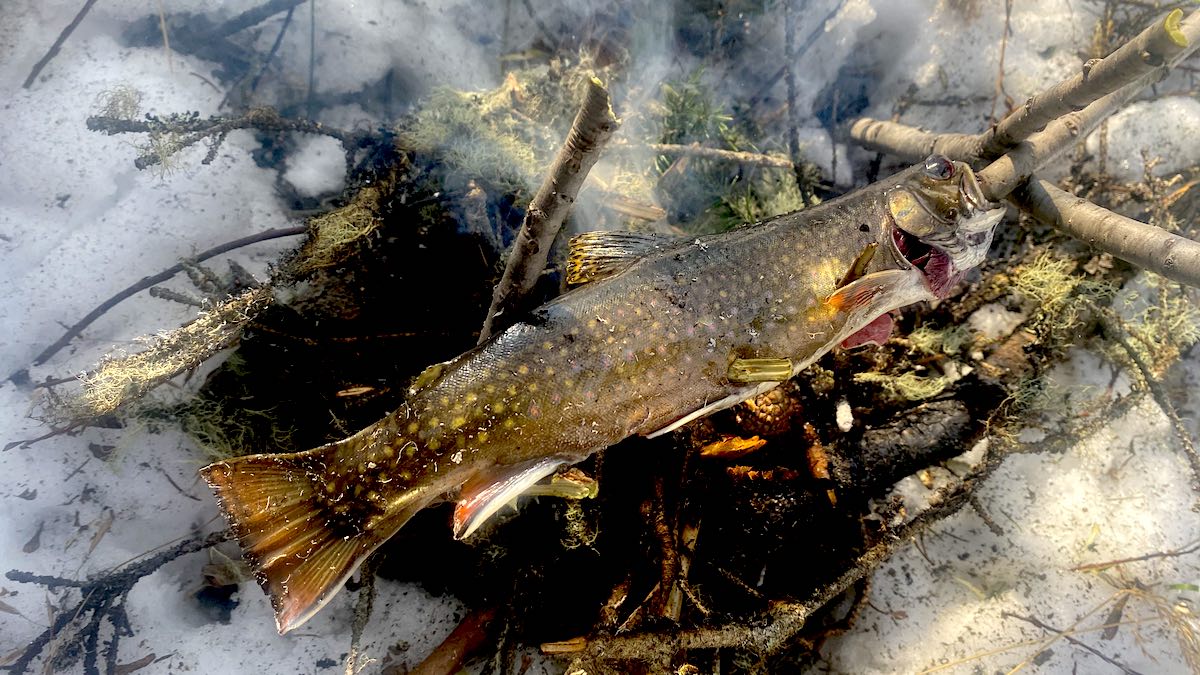 The Tastiest Trout
In adult life, I’ve become a mostly catch-and-release trout fisherman, not being a big fan of how they taste. Yet, whether through sentimentality or not, I still find brook trout to be completely delicious. Their meat is as light and delicate as stained glass and has an almost sweet flavor when compared with the flesh of other trout species.

Brookies can be cooked in a lot of different ways, from pan-fried to braised. Yet all cooking methods, aside, they simply taste best when cooked by a stream. Either fried in a pan, tossed on a grill, or roasted on a spit, brookies are a fish made to eat in the field. They also taste best in the spring and early summer, a time when other wild edibles such as morel mushrooms and fiddlehead ferns are beginning to sprout. Those often appear right around brookie streams and make for perfect side dishes, providing the adventurous angler a completely wild feast.

A lot of anglers have qualms about eating trout due to the catch-and-release ethic permeating the fishing niche. Yet brookies often sustain incredibly high populations many places they’re found, providing no reason for such misgivings. Furthermore, while they’re a popular and revered fish in their native range in the Eastern U.S. and Great Lakes, in regions of the West where they were introduced, brook trout are often viewed as an invasive species and a threat to native trout populations. In such case, harvest is actually helpful and generally supported by fellow anglers.

A Simple Kind of Trout
Not a true trout, brook trout are members of the char (Salvelinus) family and are a unique fish in the fishing world. Most trout species are praised for the challenge in getting them to take a lure or fly and for their trophy size and fighting ability.

Contrastingly, brook trout will often eat almost any bait or lure, sometimes as soon as it hits the water. They rarely exceed 12 inches in many habitats. And though they can be spunky when hooked, mostly they are simply lifted from the water by anglers with only a minimal wriggling protest. Speaking less broadly, brookies do grow huge in some places where they can be very difficult to hook and even more so to land.

Despite these perceived failings in a brook trout character, the fish embody a corner of the trout fishing world that is largely ignored or forgotten. They’ll hang out in cool places where other fishes wouldn’t, providing plenty of challenge just in reaching those headwater streams and high mountain lakes, then making a good cast in between all the obstacles.

How to Catch Brook Trout
With many notable exceptions, brookies are pretty easy. While they can be found in a variety of water bodies, including lakes, ponds, and large rivers, their need for clean and cold water means they do best in small, fast-moving streams. The tiny creeks that brook trout prefer are often in beautiful places, with clear water gurgling its way over rocks through thick green forests or meandering gently through sunlit meadows.

While the classic runs and pools on these creeks will certainly hold fish, it is important to remember that brookies can hold and feed in some surprisingly small places. Often, these are the harder-to-reach and out-of-the-way spots you might ignore on larger trout rivers. Tiny pockets of slow water around boulders or logs in the center of faster current and the foamy bases and back eddies of small waterfalls and rapids are all great spots to drop a cast. Don’t be afraid to risk your fly or spoon by drifting it up under a log or cutbank too.

Best Flies and Lures for Brook Trout
From a simple stick with a length of monofilament to a stealthy ultralight spinning rod to a fast-action 2- or 3-weight fly rod, you can probably catch brookies with the lightest rig that’s already in your arsenal. Regardless of method, a shorter rod is easier to use in the tight quarters of a small stream, preventing an angler from having to contort their body to cast a longer rod like some sort of hillbilly yoga instructor.

As mentioned before, brookies tend to be “grabbier” than other trout species. But that’s not because they are less intelligent than other trout. Rather it’s likely because in the small streams where they live, there isn’t an excess of forage. So brookies are extremely opportunistic feeders. For spin fisherman, small spinners like Panther Martins are ideal. For fly anglers, keep it basic with fluffy attractor patterns like Stimulators and Elk Hair Caddis on top and nymphs like Copper Johns and Prince Nymphs underneath. Small Zonkers, buggers, and other small streamers can be dynamite too. Just don’t over-complicate it. And remember, if you’re desperate, nothing on a brookie stream beats a juicy live worm.

Why Brook Trout?
For many anglers, going brookie bashing on a little crick may seem an insignificant practice. After all, many bigger and seemingly better fish exist. Yet fishing for brook trout isn’t so much about the fish, but rather about what they represent.

In a modern world filled with traffic jams, Twitter controversies, and hysteria over Tik-Tok videos, the simplicity of brook trout fishing provides a reprieve. It reminds us of a simpler time when all the happiness in the world could be found sitting beside a campfire, flipping fat trout in a frying pan with a hunting knife—things only visible today in history books or covers of John Gierach novels. Brookies fill us with a desire to return to those times, triggered whenever we hear a stream, smell woodsmoke—or in my case—see a bag of Wonder Bread in the grocery aisle.

How to Pick the Best Streamer for Big Fall Trout

Whether you call them hogs, slabs, donkeys, or studs, there is something universally attractive about big trout. Use any of these superlatives in your local fly shop and everyone in the place will slink towards you like a group of bird dogs hearing the rustle of a kibble bag. Big trout fascinate us and inspire us because not only are they the biggest and baddest things in the river, they’re also rare. For fly anglers these fish represent a...

How to Catch Trout at Night

Whoever said “nothing good happens after sundown” was obviously not a trout fisherman. While we’ve all enjoyed those brilliant days on the river casting for rising trout on sun-dappled pools and shining riverside runs, the fact is that we’re missing out on the real game. Trout are naturally warier during the day and are quick to dash into cover as soon as you make a bad cast. At night they become more relaxed and willing to move out into the open...

I just rolled my eyes when I saw the lure. Logic and conventional wisdom are no match for my father’s fishing hunches. My irritation belonged elsewhere anyway—with the wind, the miles of unproductive lakeshore, and the omnipresent gnats trying to slurp all the liquid from my eyeballs. At 11 p.m. in the subarctic summer my sunglasses remained on to keep the demon insects at bay, so Dad couldn’t register my look of disapproval. He walked off...